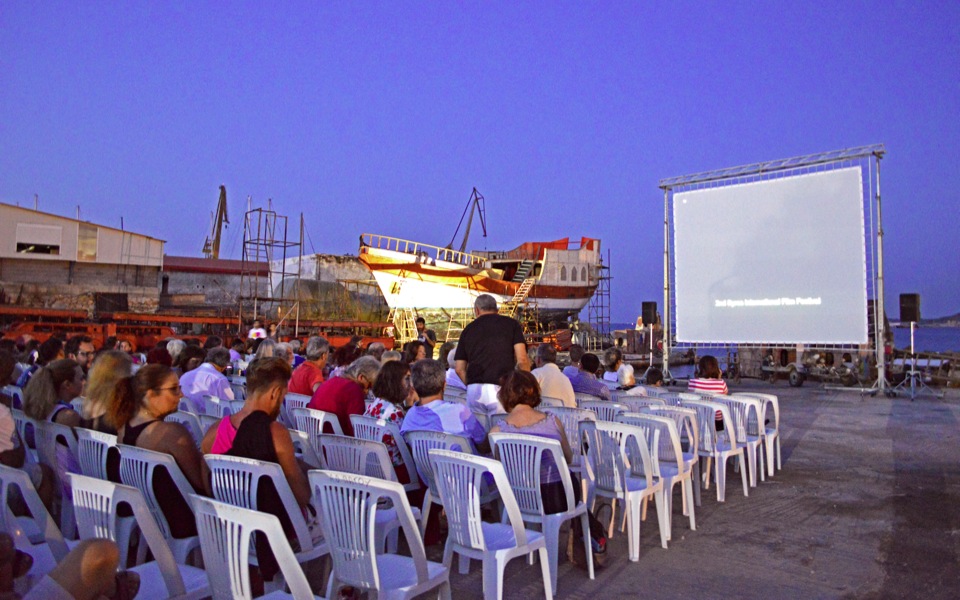 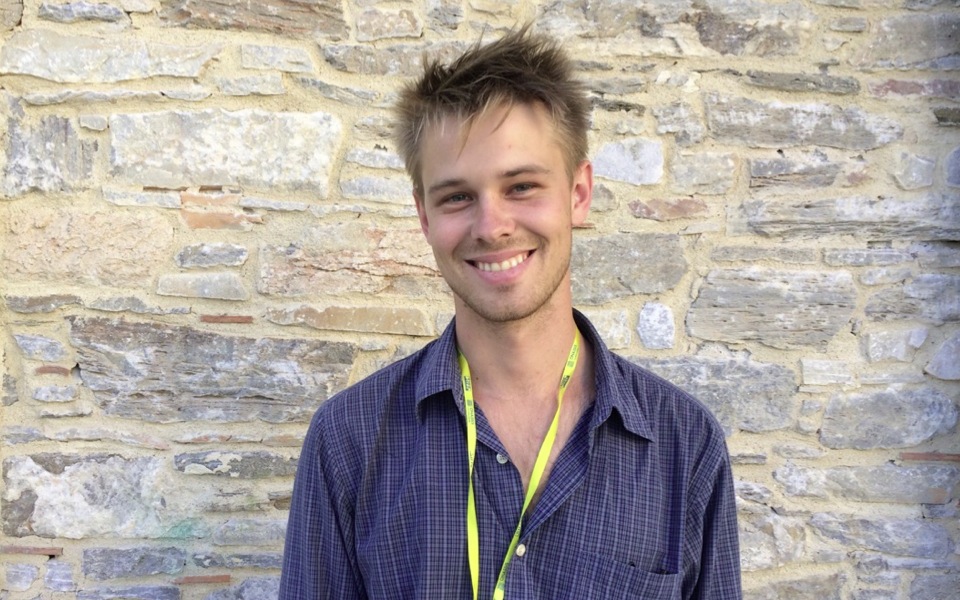 Cinema buffs have a chance to escape the barrage of tough reality in Greece and seek comfort in fiction at the upcoming Syros International Film Festival (SIFF).

The brainchild of three American 20-somethings with a dream, the festival, inaugurated three years ago, showcases 30 features and 40 shorts, as well as 14 documentary films. This includes 10 Greek works as well as films from 17 other countries around the world.

Among this year’s highlights is a tribute to Romanian film director and screenwriter Corneliu Porumboiu, recipient of the Golden Camera prize for his satirical comedy “12:08: East of Bucharest” at the Cannes Film Festival in 2006.

Organizers have also planned an extensive program on the theme of place in cinema, featuring rare, new, classic and diverse films. A drive-in venue is expected to take the cinema experience to a whole new level.

Meanwhile, organizers have planned a series of lectures on the impact of technological progress on cinema production and distribution by distinguished guests including British film director Peter Greenaway.

The festival will open with a multimedia show by the Grenoble-based performance collective Maki. The act brings together 16 mm film projection, shadow play, music and dance – all specially designed for a remote field on the island.

In an interview with Kathimerini English Edition, Jacob Moe, the festival’s managing director, spoke about this summer’s offerings, the island and the trio’s battle with the host country’s financial woes.

What are this year’s highlights?

If we have to narrow it down, I would pick out three things. First of all, we are hosting a full retrospective on Corneliu Porumboiu. The great Romanian filmmaker will be attending each screening, and we’ll be screening all of his features, including the Greek premiere of his latest film “The Treasure,” in addition to several of his fantastic shorts. Second of all, we have a massive program on the theme of place in cinema, titled “Where: Cinemas of Place.” These will feature rare, new, classic and diverse films, all grouped according to different sub-themes within the greater question of how place is articulated and expressed in cinema. This program includes the drive-in cinema we have built, which will show, of course, road films, describing the “no-where” place that is the open road. And finally, our lecture series on the technological transformation currently under way in the production and distribution of cinema. It is called “Film to Digital,” and we’re having several speakers (Peter Greenaway, Albert Serra, Louis Benassi and Elektra Venaki) all talk about the pleasures and pains of the two media, the gap between them, and the language they may or may not share.

This summer we also inaugurate Khora, an audiovisual residency founded in the hopes of creating a space for production within the framework of the festival, as well as creating an opportunity for artists to engage with certain places on Syros and to create site-specific pieces.

The residency will take place at the Syros Institute, housed in a refurbished 16th-century Jesuit Monastery in Ano Syros. Participants have the opportunity to work with two internationally acclaimed guest artists, Michael Pisaro (composer, California Institute of the Arts) and Deborah Stratman (artist and filmmaker, University of Illinois at Chicago), who will also contribute their own projects. The resulting works will be screened as completed or in-progress pieces during SIFF 2015 in a special showcase screening.

What film will open this year’s festival?

Actually, it’s not a film – it’s a performance. Maki, a multimedia performance group, will create a live experience of “expanded cinema” incorporating dance, music, shadow play, and live 16 mm projection. All of the basic elements of cinema will be at play: movement, light, dark and sound. The event will take place outdoors and under a full moon, on a sloped hill by the sea, directly across from Fanari, the lighthouse island. We’ve created a path down to the projection site, so any spectator will be able to wander down the hill and choose their own seating freely. It’s a unique event, really embedded in the locale and experience of the island, which fully kicks off the theme of this year’s program – the “place” of cinema.

Why did you pick Syros? Where do you stand now, three year’s since the first event? What are your future goals?

We chose Syros at first because we had close personal ties to the island. It became clear from the first year however that Syros was a natural choice for the location of a film festival, given the cultural seat it occupies in the Cyclades. People can expect many cultural offerings on Syros; the island has always been known for this. Now, in our third year, we could not think of moving the festival somewhere else, unless some huge turn of events took place. We have developed relationships with many venues, groups and, of course, viewers on the island that contribute greatly to the success of the festival. We also feel as though the festival has been shaped by Syros as a place: Syros is an island with a rich and varied history and you can see this in the landscape and buildings all around; it is impossible not to notice several layers of history existing at once here. We in turn have tried to make our festival’s program and screening spaces exist in this same way, revealing to the viewer the many different strands of cinema and approaches to watching it we can take. This is perhaps our greatest goal as a festival, to create really compelling screening experiences, understanding that both the material viewed and the context of its exhibition creates an overall film-watching experience.

What makes this festival different from similar events, besides its location?

SIFF is most distinct in its dedication to creating truly special film-viewing experiences that inform the specific films being shown, and, also, the more general experience of watching a film. While we are committed to showing recent films on the festival circuit, SIFF is not like many other film festivals that show contemporary film. We are not only a film festival; we are also a film event, a celebration of film, and, hopefully, a space for people to engage with film in very immediate and intimate ways. We try to program recent film with old film, films from nearby and far away, from all genres. We show in movies theaters and an opera house, a shipyard, an abandoned field, and more. We show in 16 mm, 35 mm, and various digital formats. We host talks about film, an artist residency, performances and exhibitions around film… Perhaps what makes SIFF most distinct is the space it tries to inhabit between film festival, film repertory and something else entirely.

Where does the festival budget come from?

Our main sponsor this year was the Onassis Cultural Center / Onassis Foundation. They provided crucial support for different programs within the festival, including the opening event, our lecture series, our first filmmaking workshop for local teenagers and a curation of films created for their C.P. Cavafy Digital Archive. In addition, we have received substantial grants from national consulates, including the American Embassy (which will support our artist residency and a large program of films by American directors who only completed one film) and the Romanian Embassy (who will sponsor the Porumboiu retrospective), In addition, we have received substantial municipal and regional grants and generous in-kind sponsorships, ranging from a post-production house – 2|35 – which will generously provide the award for our competition of debut feature films, to the local vineyard Fabrica and nearby artisanal brewery Nissos that will provide the refreshments for all of our events.

Has the financial crisis and overall uncertainty affected your plans?

Of course. Like any non-profit organization here in Greece, we have been confronted by reduced funding opportunities, both from the private and public sector. From private funders, especially when it comes to sponsorships from companies, we have experienced many instances in which they simply do not want to hear our proposal, because they have had to end their sponsorship programs. On the public level, there is a great deal of uncertainty at times, and so even support that had been approved sometimes can change in form, or even fall through. At the same time, the current climate can encourage funders to want to help: Especially from larger cultural institutes, we have received great support this year, in some part due to their understanding that it is becoming increasingly difficult to put on a cultural event like ours. From individuals as well, we have received this same sense of understanding, that they recognize we put on the festival in this period of uncertainty and that they appreciate the event all the more for it. While not financial, this support is a huge help. So, the short of it: We plan on continuing the festival – we just need to constantly come up with new ways of receiving financial support, and that is definitely a source of creativity.

For more information on the festival, which runs to July 12, go to www.syrosfilmfestival.org

Women through the lens of singular surrealist Man Ray