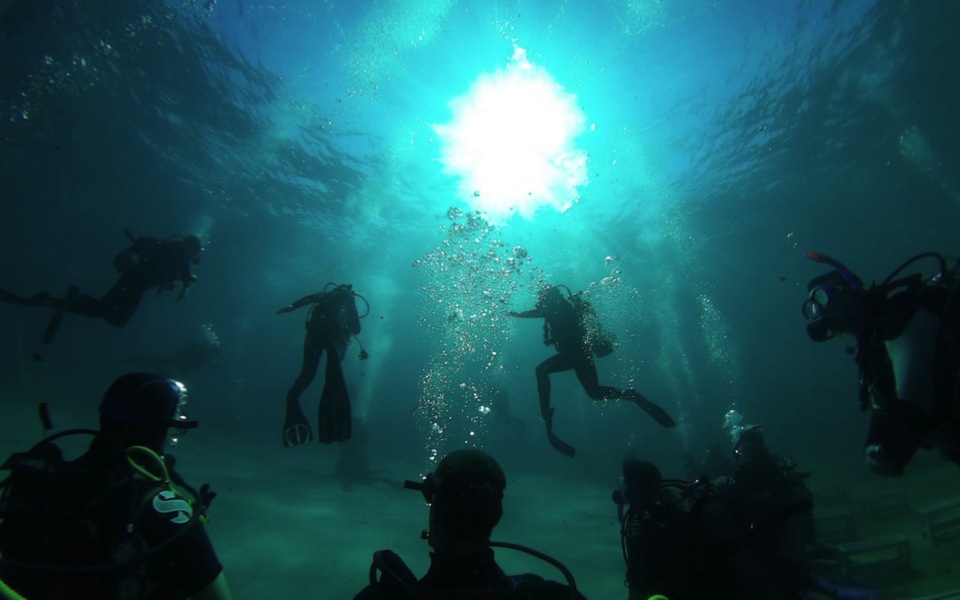 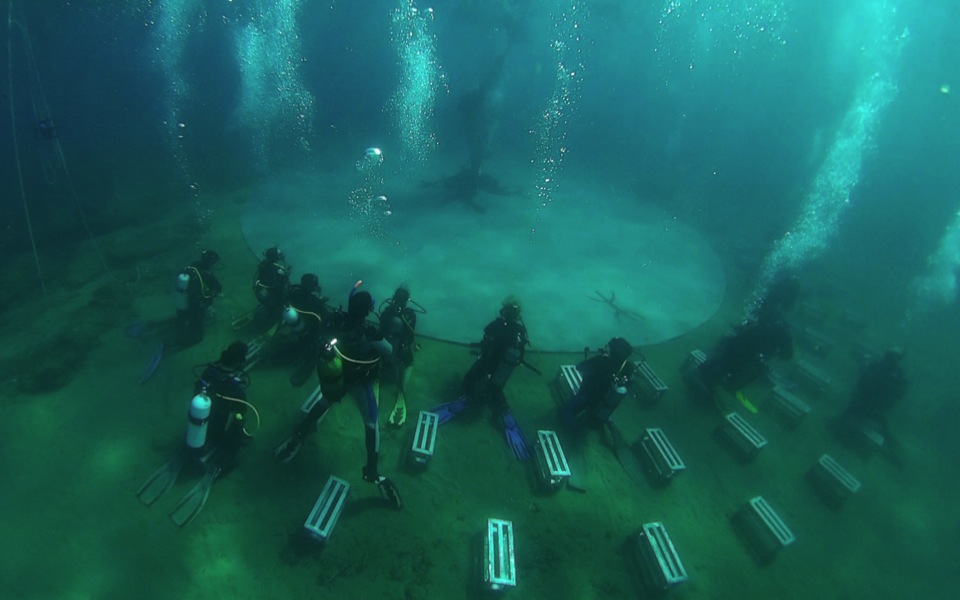 Few forms of attire less evoke the grace and beauty of dance than scuba gear. With their heavy tanks of compressed air, hoses, gauges, wetsuits, fins and masks, divers seem more like astronauts than ballerinas.

Yet in what is being billed as a world first, 14 dancers are donning scuba gear for an underwater performance, complete with specially composed music, to an audience submerged to a depth of about 5 meters (16 feet) in Cape Sounion, southeast of Athens, beneath the ancient temple of Poseidon – the god of the sea in classical mythology.

The “Drops of Breath” performance opens Friday – unfortunately with a screening on land of a previously recorded performance because of poor visibility in the water.

When the water is clear, 40 seats are available for the audience on the seabed, and 40 more could get a panoramic view as they snorkel while landlubbers can watch nearby on a giant screen for what was planned to be a three-day run.

The dancers – mostly French and Greek and including three who are disabled and three children – float into and out of formations in choreography that melds the underwater world with the stage. Hand movements turn their breath into a fine mist of bubbles. Music, composed with the conductivity of sound through water in mind, floods the circular seabed stage from two submerged speakers.

The performance is the brainchild of Greek choreographer Apostolia Papadamaki and French choreographer Sophie Bulbulyan, whose dance group in one of Paris' poorest neighborhoods includes disabled dancers.

The two, who are recreational divers, met three years ago during a dive.

“We liked each other and then we started talking artistically, exchanging ideas,” Papadamaki explained. They had “the very impulsive idea one day after a fun dive: Let's make an underwater performance. Let's see if it's possible. An underwater dance performance.”

It was possible. But not easy.

“This project is like going to the moon on a bike,” said Bulbulyan. “There was an enormous amount of difficulties.”

For a start, dancers – including those with mobility problems – had to learn to dive, and control their buoyancy through their breathing to the point where they can hover upside down and sideways, or rise and fall without moving a muscle. Seventy percent of the performers were dancers who became divers – all in the last year.

Then there were the logistics: diving gear, transport, financing, the vagaries of the weather and political upheaval in Greece, complete with banking restrictions and early elections.

“I’m bringing a French dance group from the poorest neighborhood of France, which has handicapped people in its group, to Greece, a country in chaos, and were doing something without limits,” Bulbulyan said. “It's all that together, with crazy logistics.”

The music needed special consideration. Composer Trifonas Koutsourelis researched and tested the transmission of sound frequencies so his score could both be heard clearly and choreographed in water, where movement slows down.

It took him two and a half months. “I haven't slept for the last three weeks at least,” he said.

For the dancers, especially the disabled, the experience was “beyond words,” said Papadamaki.

“They feel equal. For the first time they can move without a wheelchair, without the restriction of somebody having to carry them.”

Irini Kourouvani, who uses a wheelchair, has been a dancer for 15 years but was wary of the water as she needed a flotation board to swim.

She was hooked from her first dive.

“I forgot to be afraid and to get scared because I was so entranced by what I was seeing,” Kourouvani said. “I felt like I was floating in space, like I was on earth and the wind was coming and lifting me up.”

Now, she said, the deep is something “I won't part with. Because now I carry it within me.”

On wild beasts and other allegories

Greek holidaymakers flock back to Aegina