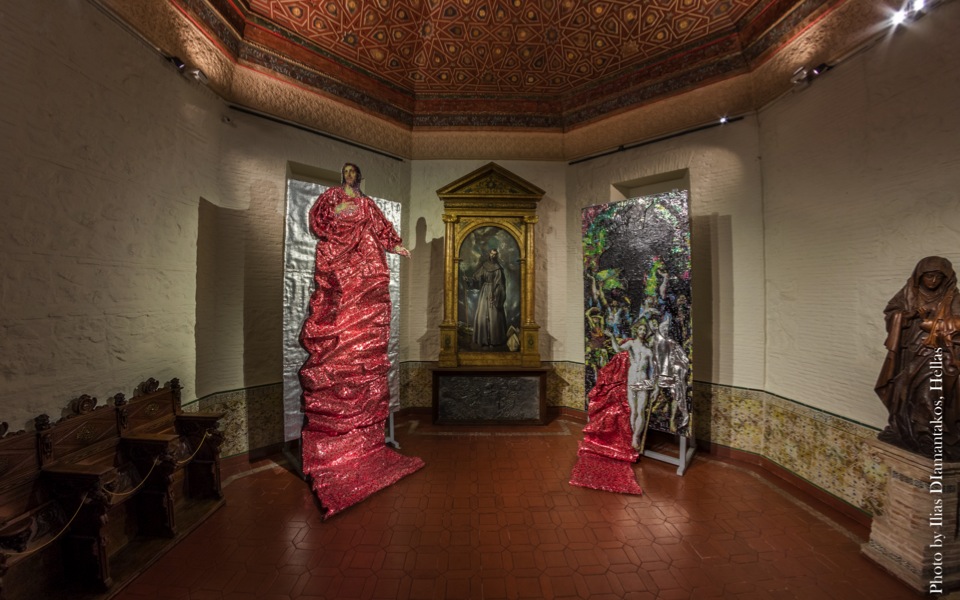 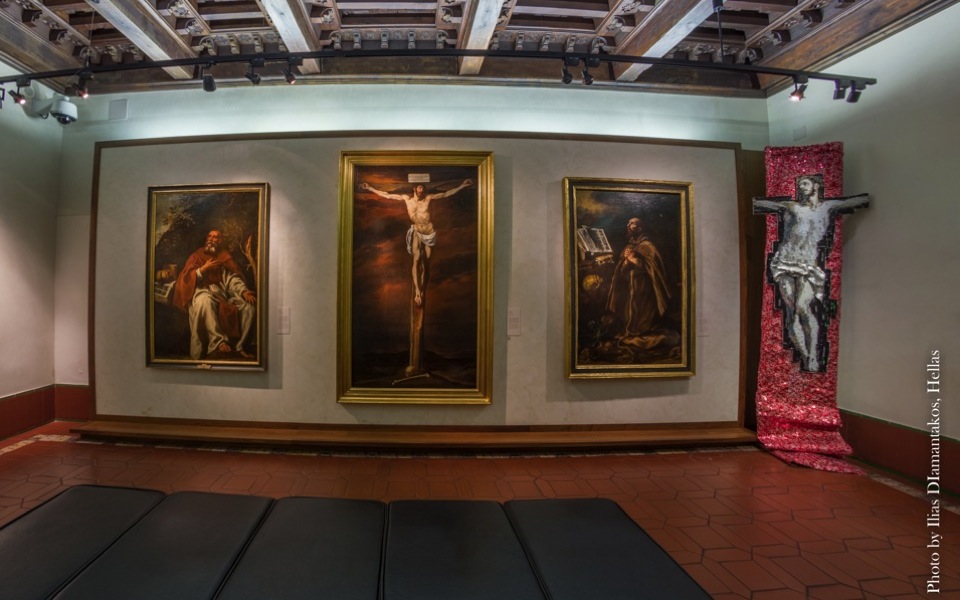 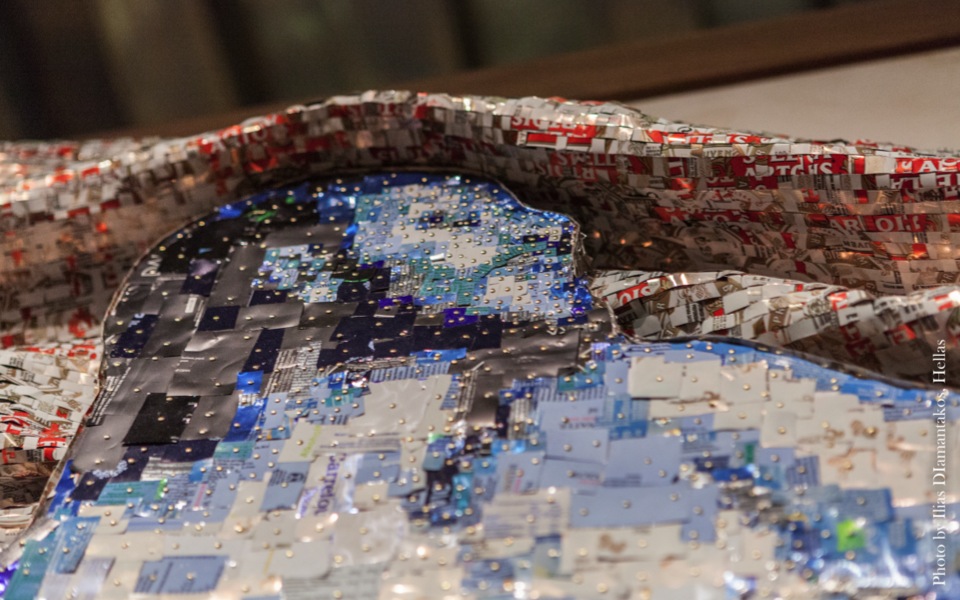 TOLEDO – Commissioned in 1603, the altarpiece depicting San Bernardino of Siena faces the viewer at the other end of the domed hall, flanked by two substantial sculptured paintings executed over 400 years later.

The showcase allows a Greek to encounter a fellow Greek – in spirit – in the intimacy of a museum dedicated to the former: In the recreated home of Domenikos Theotokopoulos, aka El Greco, contemporary artist Nikos Floros presents aluminum mosaic works inspired by the Cretan-born mannerist.

Each standing 4.3 meters high, the works, “The Resurrection” and “The Disrobing of Christ,” are two of the five pieces comprising “Light in the Dark,” which is on display in the Castile-La Mancha capital through January 10.

“El Greco is hosting me today to teach me patience and that art transcends time,” Floros told an audience of local and international guests at the show’s opening on November 11.

The display marks the first time the Spanish state museum has presented works by a contemporary artist alongside the genius brush strokes of the old master whose familiar vernacular of elongated silhouettes is imprinted across its rooms and corridors. The museum, in the town’s Jewish Quarter, recreates the painter’s house – which no longer exists – tracing his daily habits and working conditions. Works by El Greco, his students and other Spanish artists are on permanent display, while temporary shows by contemporary artists influenced by Theotokopoulos are usually viewed in a designated area on the premises.

“El Greco inspired Picasso and many other artists; he is unique and it’s impossible not to be influenced by his vision,” Floros told Kathimerini English Edition. “My work on him comes four centuries after his death and the works needed some of his aura, his size and sense. I based myself on his oeuvre and his colors, changing the compositions in a surrealist way, adding some pop art elements of my own.”

“It is very beneficial for visitors to observe original works and their connection to contemporary art,” added Garcia Castro, who described Floros’s sculptured mosaics as “impressive, peculiar and spectacular.”

Coexistence has been a defining element in the history of Toledo, once known as the “City of Three Cultures,” a place where Christians, Muslims and Jews lived next to one another. The same spirit led Theotokopoulos to settle in the city, which remains visibly marked by his presence and output.

Born in Iraklio, Crete in 1541, the artist studied iconography before leaving the island initially for Venice, followed by stints in Rome and Madrid. He arrived in Toledo in 1577, where he began developing a clientele comprising the local clergy and nobility. His commissions of portraits and altarpieces urged him to mix his Byzantine heritage with his European experiences, resulting in his highly productive and style-defining late period. He died in Toledo 401 years ago.

Several El Greco masterpieces are scattered around the medieval town: Spectacular and moving, “The Disrobing of Christ” is the centerpiece in the Sacristy of the Saint Mary Cathedral, portraits of the Twelve Apostles and “View of Toledo” hang on the walls of the El Greco Museum, while “The Burial of the Count of Orgaz” takes over a special spot at the Saint Tome Church.

El Greco’s cosmopolitan flair is a trait he shares with Floros: The artist was born in Tripoli in 1970 and studied at the Beaux Arts in Paris before settling in New York for several years.

Over the last few years his solitary exercise of piecing together the tiny parts of soft drink and beer cans which constitute his singular mosaics has been carried out in his Peloponnesian studio. The signature method is a technique the artist patented in 2003. According to Floros, the idea of transforming contemporary raw materials into a dense yet at the same time fragile fabric is not so much about recycling, but more to do with the notion of the ephemeral which defines modern times.

Previous aluminum mosaic projects include large-scale works inspired by costumes worn by Maria Callas, Grace Kelly and Catherine the Great – projects presented through exhibitions in Athens, Bologna, Monte Carlo and Moscow. In the case of El Greco, two of the works were originally commissioned by Russian authorities and were displayed for the first time at Saint Isaac’s Cathedral in Saint Petersburg last year.

The artist’s traveling exhibitions are made possible thanks to the efforts of a tight and dedicated team. Russian-born, Athens-based Julia Sysalova, Floros’s exhibitions director, calls the Toledo exhibit one more “crash test” following the Moscow and St Petersburg shows.

The Toledo project was developed in collaboration with the Regional Authority of the Southern Aegean and its governor, Giorgos Chatzimarkos, following an invitation extended to Floros by the Spanish Ministry of Culture.

Before traveling to Spain, the works were viewed by audiences at the Palace of the Grand Master in Rhodes, while the next stop for “Light in the Dark” could be El Greco’s native island.

The temporary display also adds a fresh page to Greek-Spanish cultural ties. Last year, for instance, as part of celebrations marking 400 years since Theotokopoulos’s death, the Toledo museum loaned a painting to the Benaki Museum, while more exchanges with other Greek cultural institutions could follow “Light in the Dark.”

In the meantime, Floros is working on his next project, a collection of Faberge-inspired eggs and portraits of the slain Romanov family led by Czar Nicholas. The works were commissioned by Russian authorities in view of a series of events marking the Greece-Russia 2016 Year of Friendship and are scheduled to go on display at Saint Petersburg’s famed Smolny Cathedral.

Meanwhile, visitors at the Toledo museum are discovering a new dimension to El Greco through Floros’s mosaic sculptures.

“‘Light in the Dark’ was inspired by the last work in the series created by Floros, an El Greco portrait showing him looking at the world through a crack, because the artist used candles to paint in the darkness,” noted Aristotelis Karantis, the show’s curator, who used special lighting and a music installation based on electronic sounds (including nails being hammered) in his effort to bring audiences closer to the Passion of the Christ.

Strolling around the museum’s halls you could wonder whether or not Theotokopoulos would have become ‘El Greco’ had he stayed in Crete. Would his work have flourished and gained international recognition had he not ventured beyond his home town?

“I would like to thank Toledo, which hosted El Greco and gave him the necessary tools to develop his art,” said Floros, who himself nurtures hopes of developing a venue to showcases his and other artists’ works in the form of cultural exchanges.

“Artists live in their own world. They don’t have a good relationship with money and material things,” he added. “His sponsor back then was the queen of Spain. I hope for each artist to find their own Toledo, like I hope to find my own.”

From Novi Sad to Samos, via Munich