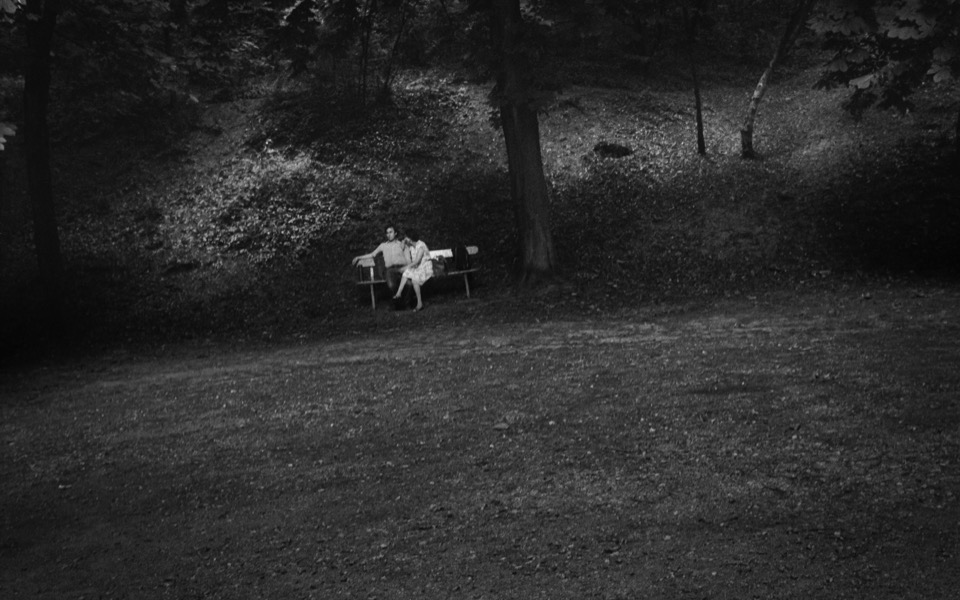 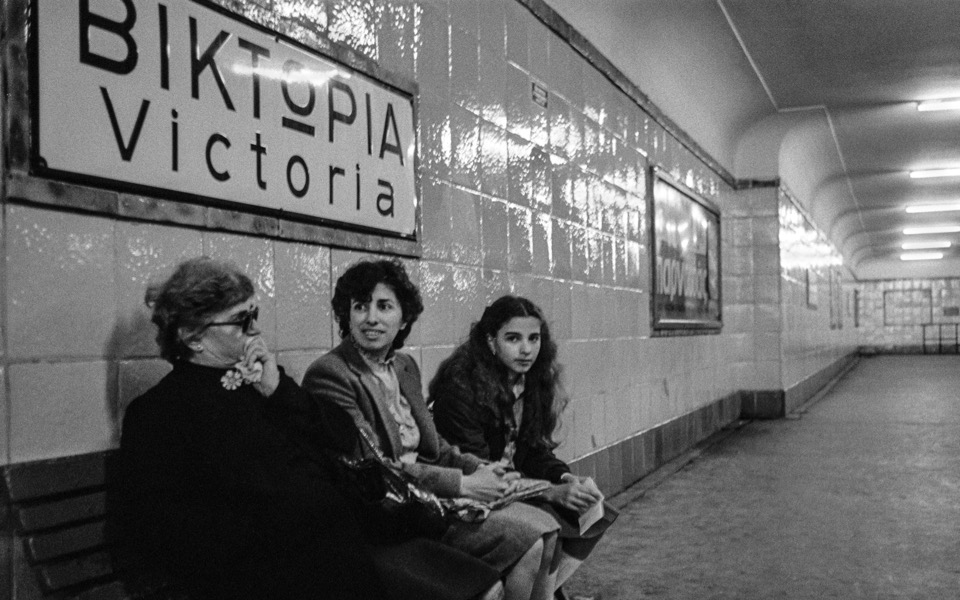 For Constantinos Pittas, a good photograph must elevate the prosaic to the preternatural, the banal to the magical.

Strolling one 1985 evening in Paris’s Parc des Buttes-Chaumont as the gates were about to close, Pittas saw the otherwise commonplace spectacle of a couple sitting on a bench. Basking in a ray of dying light peeking through the trees at dusk, the pair appeared to be floating in space. Without a second thought, Pittas pressed the shutter button.

“I felt as if it was the first time I was really seeing a couple sitting on a bench,” he says staring across the table at the photograph, now hanging on the wall of the French Institute in Athens (IFA). “It was like two units becoming one,” he says.

More than 30 years since that day, Pittas, now 59, comfortably recalls the story behind nearly every photograph in his current exhibition, “Athenians & Parisians.” The event comes in the wake of his breakout show at the Benaki Museum late last year, a warmly received collection of previously stowed-away black-and-whites shot in the still-divided Europe of the 1980s. The spin-off exhibition at IFA showcases a selection of images captured in the Greek and French capitals around the middle of the same decade.

Athens and Paris naturally lay on the same side of the Iron Curtain, the infamous divide between the free world and totalitarianism aptly captured in his “Images of Another Europe: 1985-1989.” But for Pittas, who now lives in a coastal suburb northeast of Greece’s sprawling, unruly capital, the connection between these two Western metropoles also has a personal dimension.

Pittas moved to Paris in the early 1980s to pursue postgraduate studies in civil engineering at the Ecole des Ponts ParisTech. It was his first time away from home and although he soon realized that civil engineering was not his thing, his time there did not go to waste.

“I made my first meaningful observations about life and about people during the two-and-a-half years I spent there,” he says.

Dwindling resources made him return to Athens to look for work, but distraction was around the corner again.

“I soon found myself wandering around the city streets taking photos,” he says.

Then a skinny, curly-haired youth in his early 20s, Pittas would pound the city’s sidewalks 12-13 hours a day, taking breaks on the Athens-Piraeus urban electric railway (ISAP). A self-taught photographer, Pittas’s understanding of the medium came from his voracious appetite for cinema: Bergman, Tarkovsky, Wenders, Kurosawa and generous helpings of film noir. He relied on a German-made pocket-size Minox 35GT, reputedly the smallest full-frame 35mm camera ever built, and always shot from waist level for that stealth effect.

By 1984, he was done with the Athens photos. A year later, he jumped into a blue Pony-Citroen and started zigzagging across Europe to cities on both sides of the divide with a romantic (if ironically prophetic) ambition to bring the people of the continent together in a single photo book.

“I was familiar with Paris, so I decided to make it my first stop. In a way Athens and Paris are my life’s two biggest milestones,” he says.

The project went on until 1989, when Berliners took their sledgehammers to the Schandmauer – the wall of shame. Events, Pittas thought at the time, had killed it. Thousands of negatives were boxed away in a basement. They sat there for a quarter of a century, until he recently decided to share a selection with the world.

“It makes me happy that some of the things I saw in the two cities back then are now being showcased side by side,” Pittas says.

The work is street photography at its finest: spontaneous, beautiful and telling a story. It is rarely upbeat; the faces are mostly pensive or grim.

“You always see what is close to your state of being. It’s all a projection. You cannot escape your nature,” he says. “That’s why I do not really believe in photojournalism.”

Coming in the wake of a traumatic seven-year military dictatorship, the 1980s were a transformative, if in some ways contradictory period for Greece. Politics was dominated by populism, polarization, clientelism and corruption – all widely seen as the source of many of the country’s woes today. In the economy, living standards and consumption grew while actual productivity nosedived.

Meanwhile, turning a deaf ear to the anti-Western, anti-capitalist rhetoric of socialist governments, an emerging middle class went on to embrace popular culture, consumerism and an individualistic lifestyle, pretty much in line with the rest of the increasingly globalized Western world.

Now, after seven years of austerity measures, which brought an abrupt end to a controversial period of economic well-being, the photos of Athens have gained an additional layer of interest.

“The identity of the faces has not changed. You can tell that family structure is still dominant here, that it pretty much shapes people. Middle-class families tend to keep their members in check,” Pittas says.

“You don’t see the hordes of lonely people like you do in other big European cities. Ties are stronger here,” he adds.

Change is more evident in the urban environment.

“Neighborhoods used to have a stronger identity back then. Working-class neighborhoods had more character. The uniformity we see today was not there,” he says.

Pittas is no longer keen to raise his camera in the city he first explored and experimented with.

“I find it impossible to shoot this complete lack of hope that I see in Athenians’ faces today, this air of resignation. It’s as if the sky has fallen on their heads,” he says.

“The faces I see in the streets of Athens remind me of those I came across in the countries of the communist bloc. It’s all a bit scary,” remarks the photographer.

It’s clear that his bygone journeys across the former Soviet satellites continue to inform his perspective on Greece’s current predicament.

“If we compare ourselves to what other people on the continent went through, our situation is not that terrible,” he says. “The difference here is that we were spoiled. A society that’s totally dependent on the state will inevitably suffer when the state runs into trouble.”

Although his photos are free from in-your-face political commentary, the man does not shy away from voicing his political opinions in public. He does so on a less sophisticated yet more direct medium: Facebook.

“I used to be allergic to politics and political debate. If I talk politics today, it is in reaction to the awful things we’ve had to put up with in the past couple of years,” he says in reference to Greece’s leftist-led government.

This lingering malaise has naturally generated a wave of nostalgia for the pre-crisis years – a reflex that often comes with a certain level of oblivion about the era’s part in creating the mess of today.

“Athenians & Parisians” is taking place on the sidelines of the much-publicized “GR80s” show at the Technopolis cultural complex in downtown Gazi, which is a political, social and cultural anatomy of Greece in the 1980s. The event has sparked a wave of nostalgia, as large crowds flock to see, among other items, a splendid reconstruction of an archetypal 1980s flat.

Pittas admits that part of the response to his long-buried body work is a result of this backward-looking mood.

It’s not all bad.

“Nostalgia is fed by a desire to return to an idealized time, which may coincide with our youth, or what we may regard as being innocent when it was probably anything but,” he says.

“But it could also spark a soul-searching process that helps us understand how we ended up where we are today,” he says.

None of that takes away from the value of the work, or from the existential fulfillment that this born-again photographer experiences today when seeing his work receive long-overdue recognition.

“I find it amazing that something I once did in the spirit of youthful frivolity seems to make sense to people today, to tell them something about their lives,” he says.

Rewinding to the era of analog politics