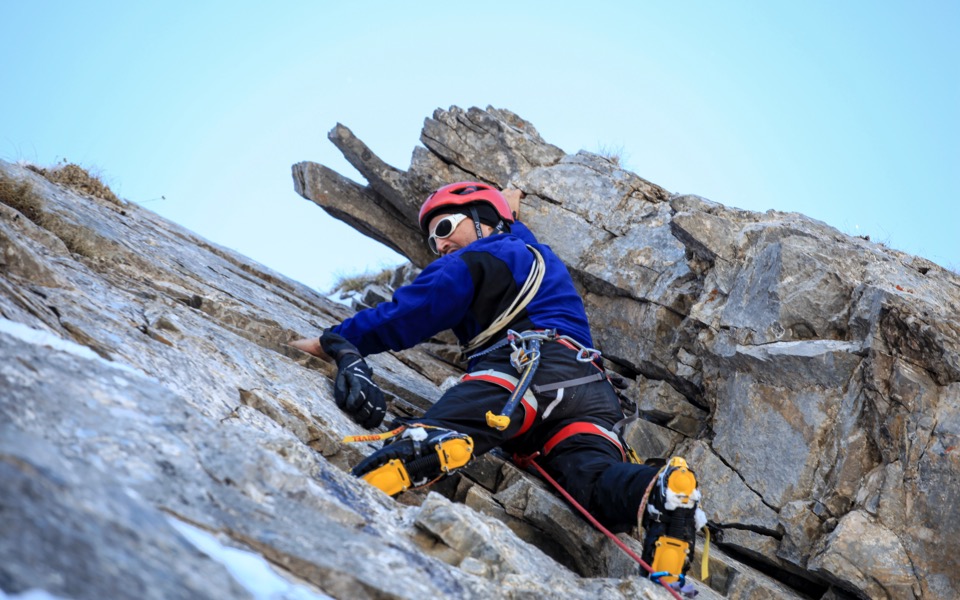 The ascent to Profitis Ilias can be challenging even for seasoned climbers. [Babis Giritziotis] 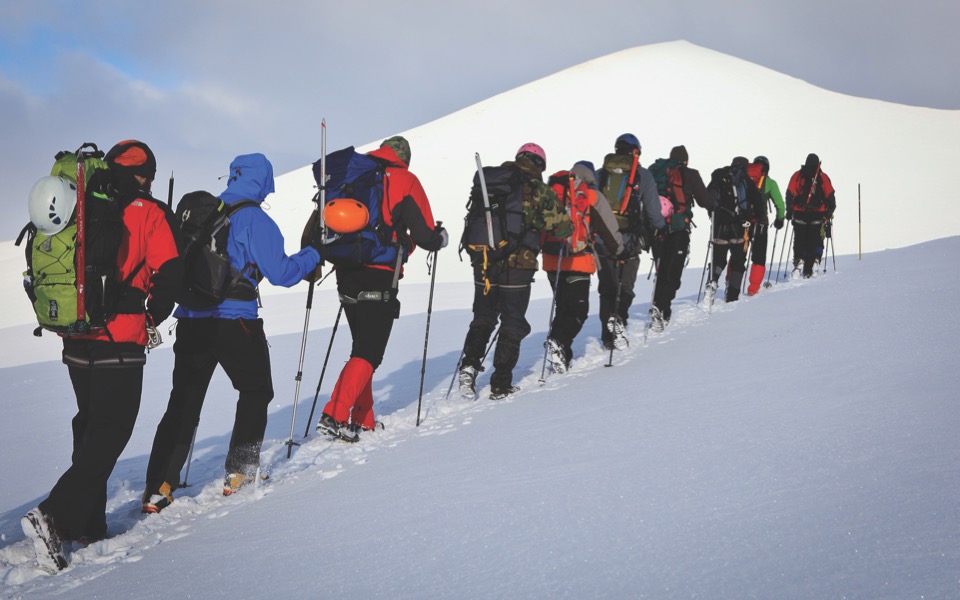 A group from the mountaineering school is taken on a winter expedition by an expert guide. [Babis Giritziotis] 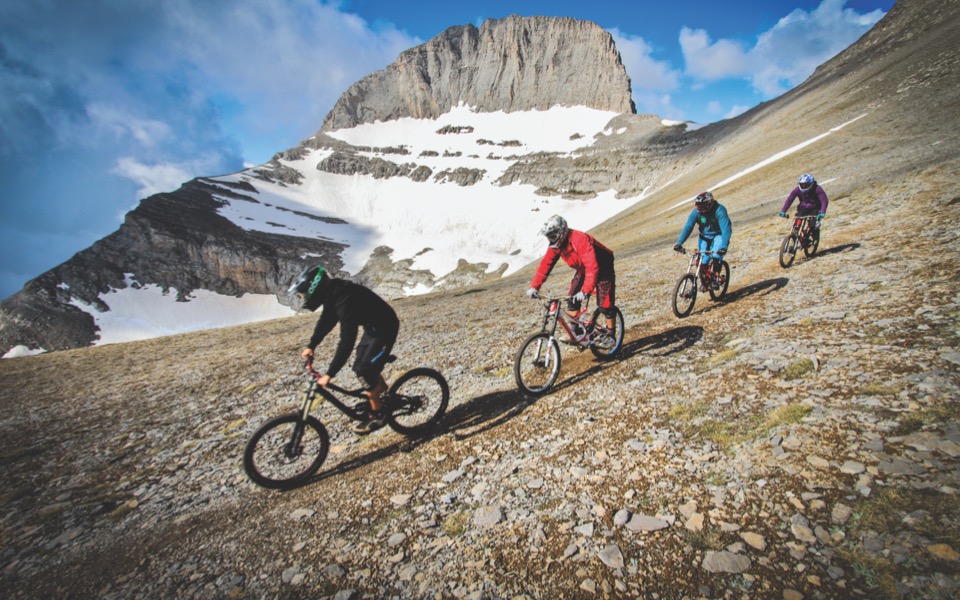 Mountain biking is gaining popularity as one of the many activities visitors can enjoy on Mount Olympus. [Babis Giritziotis] 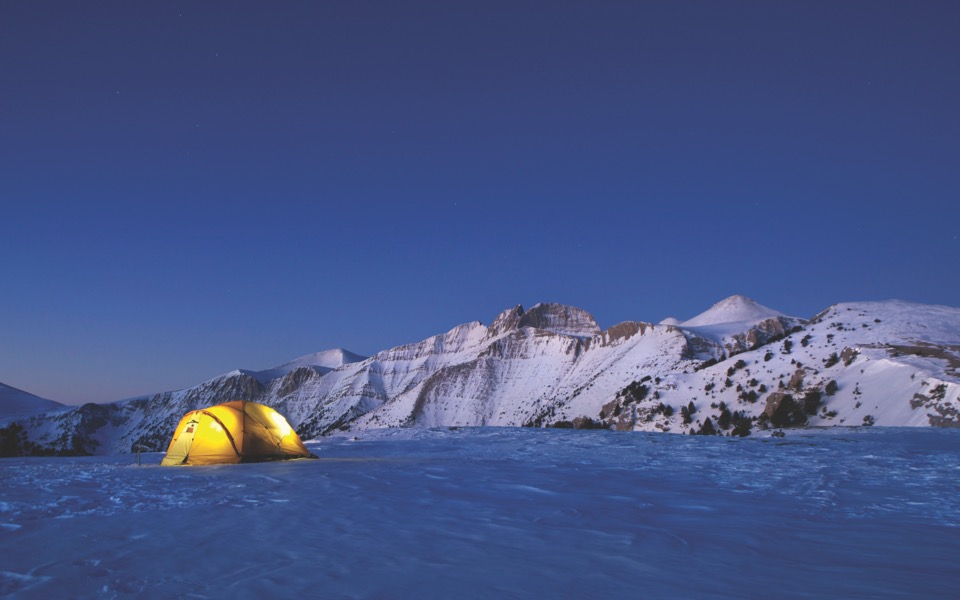 Photographer and mountaineer Babis Giritziotis knows Mount Olympus like few others and has spent the past few months capturing the views from its highest peaks in a fascinating 360-degree tour of the home of the ancient gods.

“In January 2014, two friends – climbers Michalis Styllas and Thomas Thomidis – and I attempted the route between the ridges of Kopsis and Profitis Ilias in winter conditions. Few people had attempted it before and I accepted the challenge with great pleasure, as I’d never explored such remote and wild parts of the mountain,” says Giritziotis.

“Everything was going according to plan, until the second day, just before the sun went down, when we realized we had lost our way. Nightfall found us in a spot so tight we could barely pitch the small tent we had with us,” he adds. “We tried to head on the next morning, but it was impossible from that location. Going back was the only – and rather painful – solution. Many hours later and exhausted, we found ourselves at a taverna: We had earned a hearty meal and some warmth.”

What Giritziotis learned from this experience and from listening to his two friends talking about their ordeal is that one of the many things the mountain teaches you is how to keep a cool head while making important decisions. Patience and respect is another.

“Even though we kept looking up, going back was the right move,” he says. “Anyway, the mountain will always be there, waiting for us.”

Giritziotis can spend hours talking about Mount Olympus, recommending routes and inspiring the same passion he feels, but also debunking the many myths that surround it. “It is a very misunderstood mountain and much easier than most people believe,” he says.

Adventure photographer for Canon Greece and official photographer of The North Face Greece, Giritziotis has been systematically involved in the photographic and video coverage of athletic events organized on mountains and in other countryside settings both in Greece and abroad. It was in this capacity that he found himself in Nepal in 2010 and 2011 covering the Solukhumbu Trail, covering 300 kilometers in 15 days on foot at altitudes of over 5,500 meters to capture images of the two Greek athletes competing.

Giritziotis, who lives in the northern port city of Thessaloniki, which is relatively nearby, has been climbing Olympus regularly for the past 15 years, all year round, with friends or alone, always carrying his photography gear.

“I don’t look at it like work because it’s a pleasure,” he says. “The beauty of this particular mountain, in combination with the mythology associated with it, really makes it a special, transportive experience. It is really a very easy mountain to love.”

It was this passion that inspired the Mount Olympus Summits 360Γ project, an ambitious endeavor to capture panoramic views from the 55 highest recorded peaks – above 2,000 meters – which began in September 2015 and is still ongoing. Once completed in roughly a year’s time, its collection will include both summer and winter shots from each location in order to highlight the changes in the landscape with the changing seasons.

“Speaking as a photographer, I like Olympus best in spring and winter because that’s when you get the most intense and powerful shots. I especially like it in winter: The mountain changes and offers so many possibilities, allowing you to play with the scenes,” says Giritziotis. “I always go up when the skies are clear, though what I’ll encounter at a summit is unpredictable. I’ve often come upon thick clouds that make my work extremely difficult, as ideally I would like a clear horizon. When that is the case, I either wait for the sky to clear or leave to return another day. Patience and respect are key at high altitudes. You’re not there to conquer anything, but to see something beautiful, to enjoy yourself while keeping safe. To achieve this, you need to know when to stop, when to turn back and when to return.”

Giritziotis’s photographs can be seen on the website mountolympussumits.com, which allows visitors to take a visual tour of the summits, read about the photographer’s own experiences on the mountain and see photographs from other parts of Olympus as well. The material is constantly being enriched and updated with every new expedition.

Giritziotis’s objective is to showcase both the known and lesser-known beauties of Greece’s most legendary mountain and perhaps even inspire new, fascinating expeditions.

The experienced mountaineer explains that Olympus is not off limits to anyone: You’ll come across all sorts, from hikers wearing simple walking boots to experienced climbers scrambling up the cliffs with ease. At the Mouson Plateau you’ll see climbers in their 70s making better progress than many of their younger peers. Giritziotis adds that the main trails are very well signposted because of the races that take place the mountain, while new trails are being added all the time.

“There are areas that I don’t know, either because they’re tough to reach or simply because I haven’t reached them yet,” he says. “However many years you spend exploring Olympus, there will always be spots you have never set foot on.”

Symposium to showcase finds from 1600 BC tomb found in Marathon

Astir Palace: The end of an era