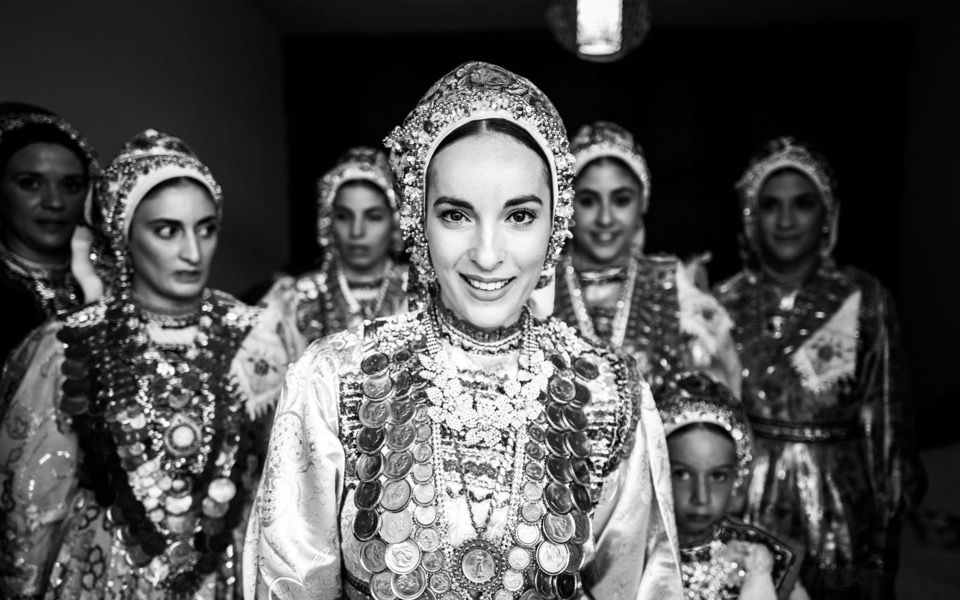 A bride in traditional dress in Diafani in Karpathos. [Pculiar.com] 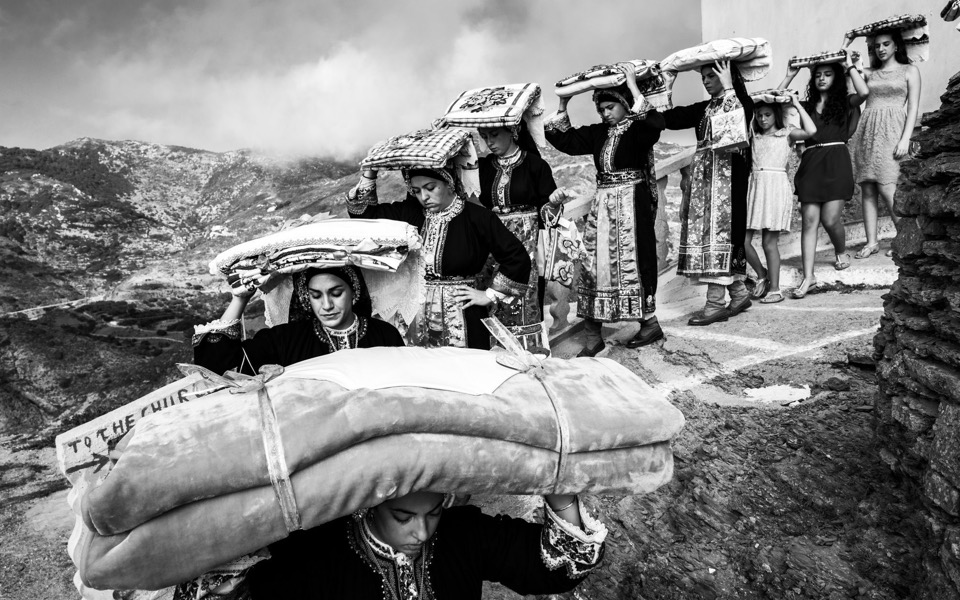 Women carry the groom's dowry to the bride's house in Olymbos in Karpathos. [Pculiar.com]

During the celebration of the Holy Spirit in Mount Falakro in Drama, the icon procession is done on horseback. [Pculiar.com] 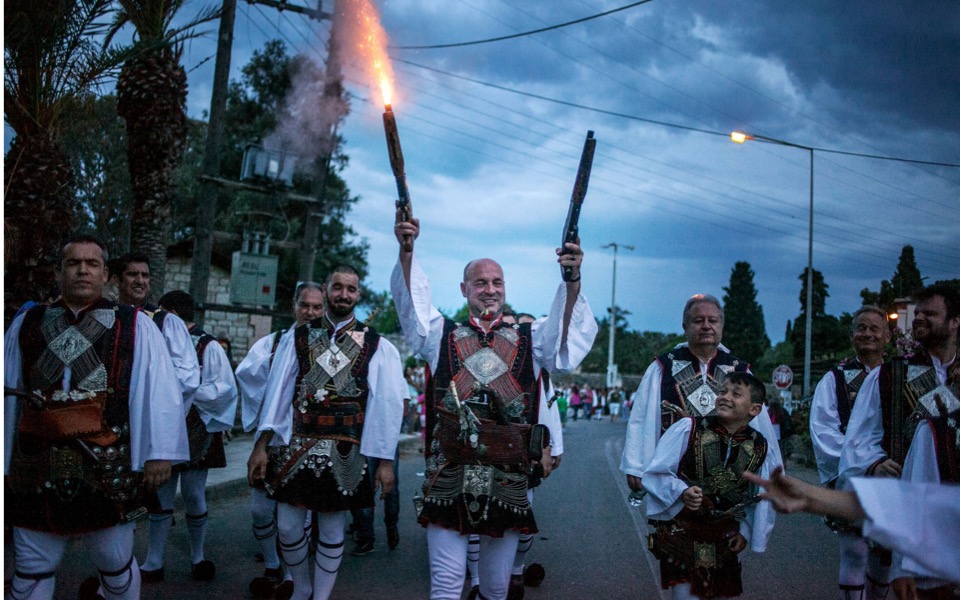 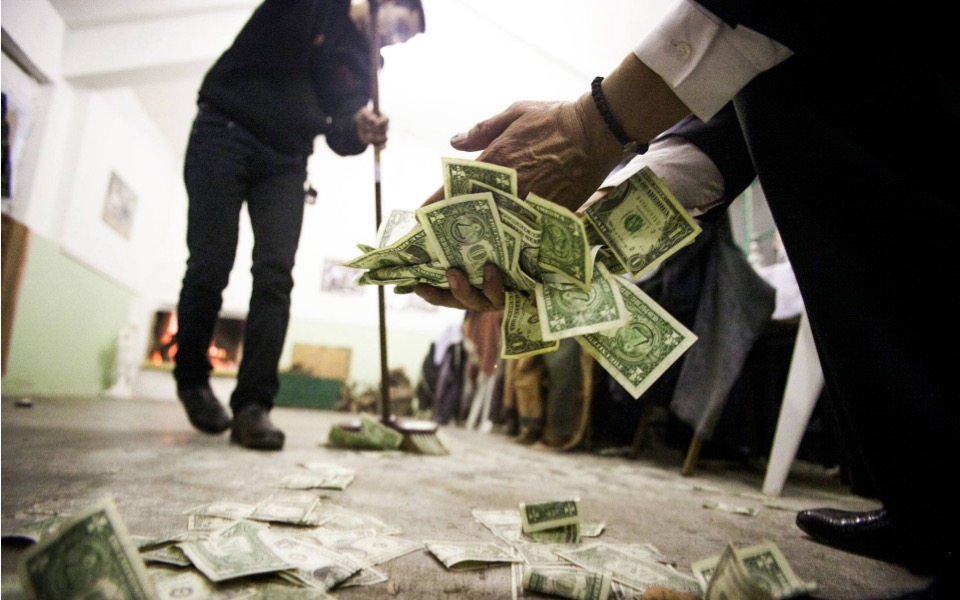 A boy dressed in a blue robe pulls a face at the lens, his energy and youth out of place in the austere atmosphere of the religious procession with the icon he’s a part of in the village of Prokopi on Evia. In another photograph, nine young women and girls walk single file along a trail carrying a groom’s dowry on their heads to the bride’s house. In the background you can just see a ridge of Karpathos’s Mount Olympos, but there is a strange, almost surreal quality about the scene, as though the young women were on a different planet.

These are just two of hundreds of images that can be seen on pculiar.com, a new photography website on the weird and wonderful customs and rites that take place mostly in Greece but also other parts of the world. Sitting on the comfortable mustard sofas of their Athens offices, photographers George Tatakis and Michael Pappas of the firm Reflex Photographers explain how it all began. “I began photographing customs in 2011, but I didn’t have anything particular in mind at first,” says Pappas. “I started in the villages of Evia, where I come from, where I know people and have access. At one point I realized that this thing suited me, I liked it and I saw that it had untapped potential.”

Today, Pappas and Tatakis – an electrical engineer who gave it up for photography – form the core of pculiar. The team includes another 10 photographers, some of whom send material from abroad, as well as composer and musician Thanasis Christodoulou (aka Lumiere Brother), who is in charge of exhibitions and events.

The pculiar website, which is in English, has two functions. To begin with, you can type in a destination you are planning to visit along with your dates and learn about customs or festivities that will be taking place in that area at that time – along with photographs of them. At the bottom of the page, moreover, you will see fresh stories that are frequently renewed and give the website a newsy feel. Each photograph comes with a caption by the photographer describing his experience.

“We usually don’t do a lot of reading before we attend an event, precisely because we don’t want to go with any preconceived ideas,” explains Pappas. “A lot of the time, we go to photograph one thing and end up being drawn to another.”

Even though the subjects of pculiar are not accustomed to posing, they seem to readily accept the presence of the camera in most cases. “If you turned up on any other day, you would it find it hard to convince them to be photographed,” says Tatakis. “In contrast, when it is a matter of a custom, the participants want to show off their village. They are organizing a spectacle and want people to see it; they want the attention.”

“It’s usually them running after us,” adds Pappas. “They invite us to dinner, to stay in their homes, they insist on opening the doors to their houses, to their cellars, to show us their wines. It’s like this is something they have been waiting for for a long time.”

Which photographs make it onto the site depends on a variety of factors and the photographers stress that they are not interested in showcasing events or locations, but moments. “We don’t care about the landscape, the natural surroundings, the volcano… But, if some custom is held in their midst, then that’s the ideal situation for us,” says Pappas.

Many of the photographs on pculiar are peculiar to say the least, bizarre even: startling masks, blazing fires, odd faces, traditional costumes, painted faces, horns… “These are things you can’t see anywhere else,” says Tatakis. “These customs are held in a specific place at a specific time. We especially like the winter rituals, because the clouds and fog add so much to the evocative atmosphere. We are certainly lucky to live in Greece, where there is such a huge variety of customs and traditions, many of which have Turkish, Italian and Balkan influences or stem from Dionysian and old Christian rites.”

The photographers certainly seem to be onto something as many of the photographs on pculiar have been published in National Geographic, in Leica magazines, on the US’s VICE and many other popular websites.

A question that inevitable arises is whether pculiar’s members intend to pass comment with the photographs they post or are unbiased observers.

“We basically found a subject that allows us to capture great images,” says Tatakis. “It is not our aim just to create a record of the custom, so obviously there is an element of comment, albeit inadvertent. Photography is an abstract art in which we mainly choose what we won’t show. By this process of editing, therefore, we are expressing an opinion, a concern or a belief. But we want the image to speak for itself. Otherwise we would have become writers or poets.”

Both stress that it is never their intention to poke fun. “In Messolongi, the men dress up like fighters during the Greek War of Independence and they really get into it, they feel it in their bones. I respect that,” says Pappas.

“The differences we have with the locals are mainly, let’s say, artistic,” adds Tatakis. “They’ll say, ‘Come take pictures at this wedding we’re having over here; it’ll be fun.’ But then you look around the corner and see the priest battling with a strong downpour under a shelter made of plastic sheets, protecting beans that have been strewn on the floor, bottles of wine, plastic chairs and a small Greek flag in the back… How can you possibly miss all this – for a simple wedding ceremony?”

Beyond its artistic merits, the website also offers valuable information on customs and rituals that until now only fragments of which could be found scattered around the internet. The photographers have discovered that many rituals are unknown even to people who live in the next village. Pappas recalls several instances when he asked locals about the precise location or time of an event and they didn’t even know such a thing existed.

On the subject of how they find funding, the photographers explain that pculiar does not have banners or other revenues other than from establishments such as restaurants or cafes that they themselves choose to advertise.

“We’ll tell the owner that we like his place but want to present it in our words from our experience and using our own photographs. Most are happy to accept. Other than the fact that they don’t have to photograph the space themselves, they also understand that the ad is based on a real experience and that this is something readers will appreciate,” explains Pappas.

The HQ of Reflex Photographers in Kato Petralona (27 Ious), south of central Athens, is a house turned into elegant offices where the decorative style is a blend of old and new. The company organizes workshops, design classes, presentations and exhibitions. It also has a shop selling coffee-table books and the rooftop is used in the summer to host free screenings of films that are interesting from a photographic perspective. On July 1, for example, they’ll be showing “Manhattan,” and just as Woody Allen intended this film to be his love letter to New York, so the pculiar team pays homage to Greece’s traditions and customs with its interesting new website.

Leading the charmed life in Greece

An untapped treasure on Hydra

The World War II adventures of an ancient lady

Astir Palace: The end of an era