‘When you have an economic crisis and high unemployment in a country, the far-right rises. Unfortunately we are seeing this in many European countries at the moment,’ the director says. 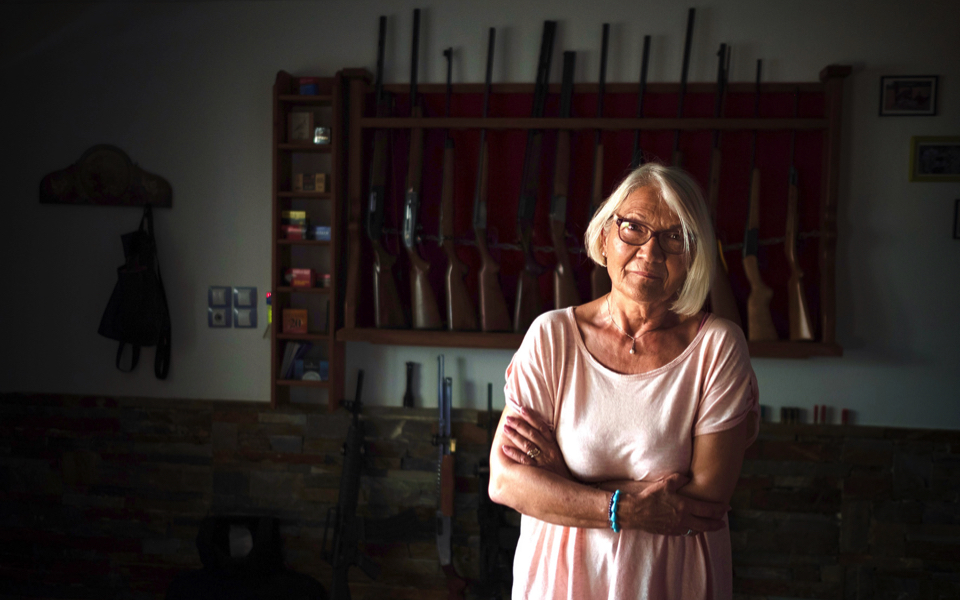 As she waits for her son, a Golden Dawn party MP, to come out of jail, Dafni wipes a collection of rifles sitting on a weapons rack in their family home. Behind her, sunlight streams through a swastika-shaped grille on the window.

The disturbingly comic scene in Norwegian filmmaker Havard Bustnes’s “Golden Dawn Girls,” which made its Greek debut at the Thessaloniki Documentary Festival earlier this month, encapsulates a familiar question: Are people like Dafni genuinely evil or just plain naive?

The film follows three women after the legal crackdown on the far-right Golden Dawn in 2013, which led to the arrest of many of its senior members, including party leader Nikos Michaloliakos. With many of the men behind bars pending trial on charges of running a criminal organization, women had to step in and energize the campaign for the next election.

Dafni, a former submarine engineer and hospital director who describes herself as a disaffected ex-member of socialist PASOK, has a strong penchant for conspiracy theories. Jenny is the politically active dynamic wife of MP Giorgos Germenis, a former black-metal bassist and baker. But it is Bustnes’s encounters with Ourania, the enigmatic daughter of the party’s leader, which are the most intriguing. When confronted with an old photo of Michaloliakos giving the Nazi salute in front of a swastika flag, the 26-year-old psychology student with a soft spot for dogs and Disney movies responds in a way that appears to strip her of the benefit of the doubt. “I support everything about my father.”

Domestic audiences will not find much new in the documentary, a collection of interviews and archive footage of the party’s bigoted rhetoric and attacks on migrants, but they are rewarded by some distressingly candid remarks as Bustnes leaves the cameras rolling after his subjects believe shooting is over.

The director discussed the experience of shooting in an email interview with Kathimerini English Edition.

Do you think that these women are animated by pure conviction, in that they truly believe in Nazi ideology, or by personal affiliation?

I think they are convinced of the ideology. They feel like they are in a war, and they believe in all these conspiracy theories. They think that a small group of Jews rule the world and are trying to destroy the so-called Greek DNA to take control of the resources in Greece. For me this is very scary and hard to understand. These are old ideas from the Second World War; how is it possible to believe in them today?

But I also think they would like to live a more normal life outside politics. Ourania wanted to move to England to study psychology, and I don’t think she likes her role as an infamous person. I think they feel obligated to support the men, and even more so when the men were arrested.

Do they have full knowledge of the party’s darkest side, including the orchestrated attacks on migrants and Communist Party-affiliated workers?

I don’t know exactly what they know or don’t know. When I asked them about the attacks on migrants, they denied that Golden Dawn is violent. As you see in the film, Jenny says they only smashed tables and didn’t beat immigrants. This is typical of how they talk about concrete evidence that shows that Golden Dawn is a violent group. In their minds, it is always somebody else’s fault. They say it is the media which lie, and that they are innocent. Dafni even says that the videos of Golden Dawn members with guns circulating on the internet are the product of manipulation.

Did you feel these women are genuinely evil?

That’s a big question. What does it mean to be evil? From their point of view, Greece is at war, and they believe Golden Dawn is fighting for the good. There are so many conspiracy theories that they believe in, which explains how they act. So I don’t think it is about evilness but about knowledge and their corrupt worldview. If you read the wrong books and are exposed to the conspiracy theories that Golden Dawn promotes, you can end up believing in the evil politics of the neo-Nazis. And if you believe you are in a war, this could justify evil acts and violence.

How easy was it for you to gain access?

Our access was based on another film producer Christian Falch made about black metal. One of the characters in that film was Germenis, and it was his wife that helped us to gain access to Golden Dawn. She introduced us first to Dafni and later to Ourania. This was a long process that was of course difficult, but I think the fact that we are from Norway made it easier.

Did you ever feel worried about your safety and that of your crew?

We were warned that Golden Dawn have attacked journalists. At the first Golden Dawn rally we filmed, I borrowed a black-metal T-shirt from the producer to blend in. We experienced one situation at Syntagma [Square, in central Athens] where a tear gas grenade exploded some meters away from the photographer, and we had to drag him away to safety.

At some points in the film you seem to try to come across as naive in a bid to get them to lower their defenses. Did the strategy work?

I think it worked, because they did open up. When I play naive they show more of who they really are. Of course, it was a balance between how much we could confront them and how naive I could pretend to be. I decided to be more and more confrontational, but I waited until the last day before I asked Ourania what she thought about my political standpoints. Then she said that she always knew I was a leftist.

Do you see the rise of Golden Dawn in Greece as part of a bigger European pattern, or as a development that is specific to Greece and its financial crisis?

I do see this as a part of a bigger European pattern. When you have an economic crisis and high unemployment in a country, the far-right rises. Unfortunately we are seeing this in many European countries at the moment. I think all the European countries have to assume a bigger responsibility and solve the economic crisis together. We cannot say that this is a local problem. We have to help each other.

It seems to me that the strongest moments of the film are your encounters with the Golden Dawn chief’s daughter, Ourania. Do you think you ever managed to get to the core of her personality?

It is always difficult to say what is the core of a personality. I think the film makes you understand her better, but I think she is a complex character that is difficult to understand. I think it was hard for her to grow up in this party as the child of Michaloliakos, and I think Greek media have treated her badly, writing about her being fat and ugly. At the same time, of course, she is responsible for supporting a violent party.

The journey and the sacrifice