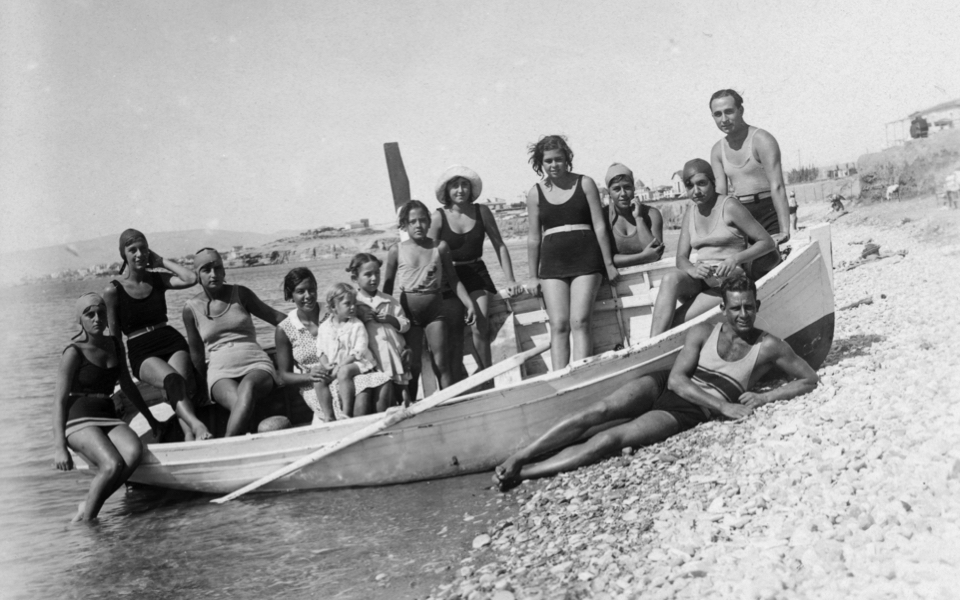 Beachgoers pose in Kalamaki, southern Athens, a popular spot for a swim and a bite at one of the local tavernas, in August 1930. 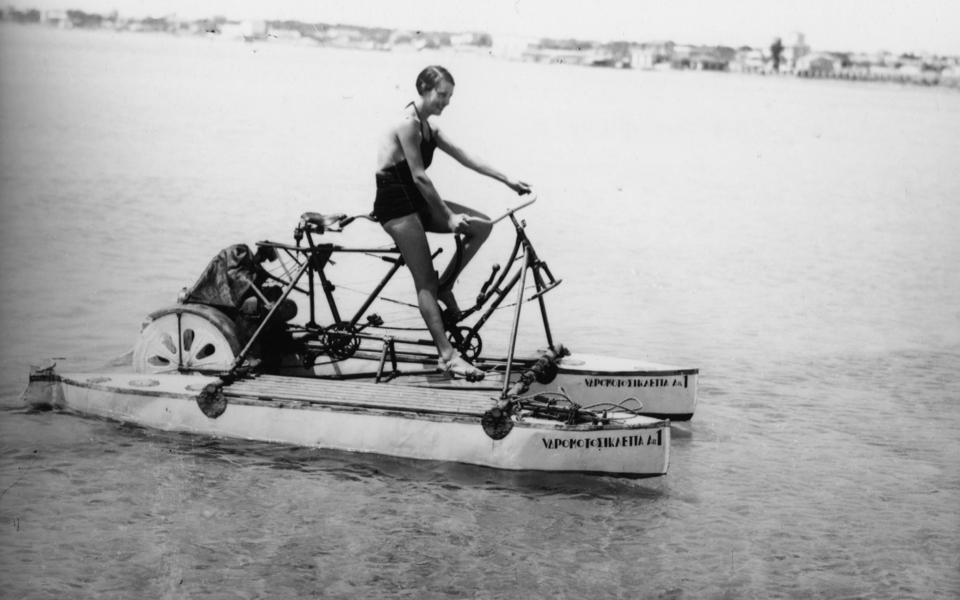 A woman rides a hydrobike in Athens’s Glyfada suburb in 1935. 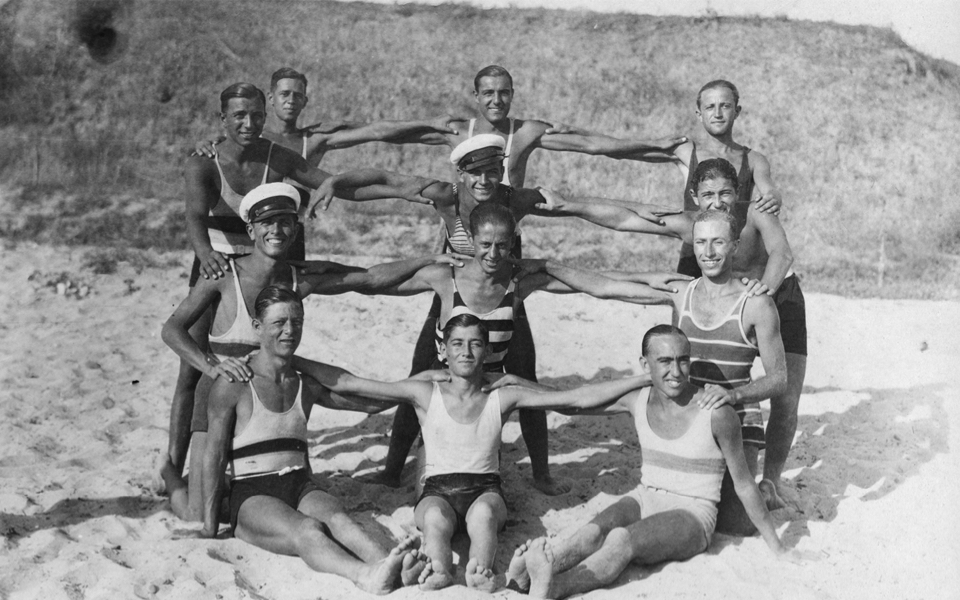 Young men in one-piece swimsuits on beach in Thessaloniki, in 1930. 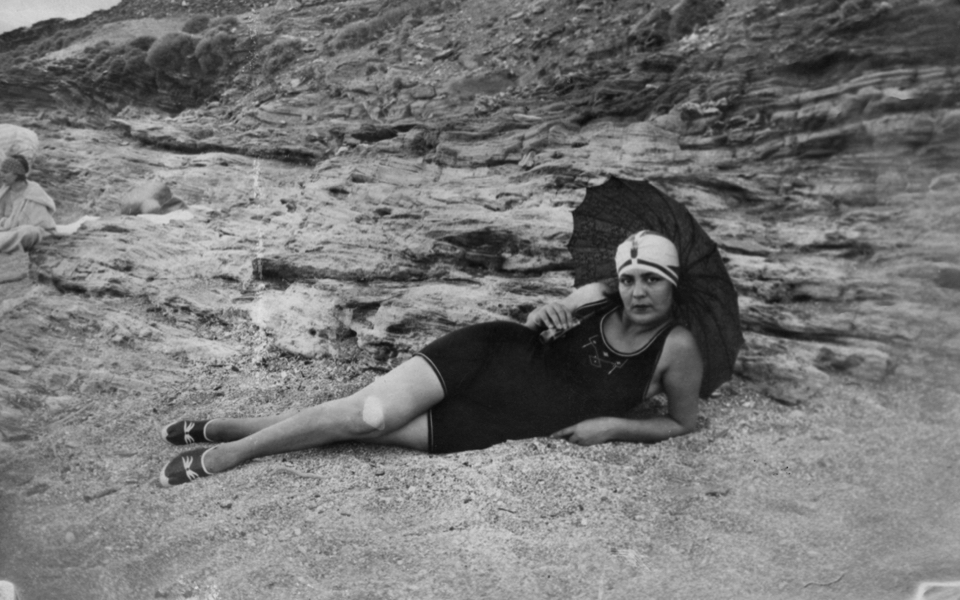 In 1907, Annette Kellerman appeared on a Boston beach wearing the world’s first one-piece bathing suit for a woman. The 20-year-old Australian athlete was arrested on indecency charges even though the suit was extremely modest by modern standards. Yet the fact that it had short sleeves and stopped mid-thigh was considered provocative at a time when the sight of a lady’s ankles was risque. The offensive garment was also tight, showing off the figure of the young swimmer, who went on to star in the first silent pictures with nude scenes.

Nevertheless, Kellerman’s swimsuit soon became all the rage in the Western world, including Greece, and it can be seen among the older photographs in the collection of Nikos Politis, the proud owner of one of the country’s greatest private photographic archives.

“The photographs of bathing suits worn on Greece’s beaches in the early 20th century and the ‘bains mixtes’ [mixed baths] that gained popularity in the inter-war period have a very special place in my archive,” says Politis. “Other collectors have told me they constitute the richest collection of its kind.”

Among these older photographs, we see one from the late 1910s showing an attractive young woman posing on the beach in a dark one-piece suit with matching shoes, a small parasol and a turban.

Until Kellerman shocked the establishment’s sensibilities, women in Europe and the United States wore a two-piece – nothing like the modern bikini – that consisted of a dress worn over long bloomers, often with stockings as well. These ungainly garments were usually made of wool: itchy, uncomfortable and heavy when wet. This is exactly what Kellerman argued to the judge who ordered her release. He accepted that she needed the suit to train, but ruled that she could only wear it in the sea and then with black stockings.

The publicity surrounding this incident prompted the swimmer to design her own bathing suit line and turn over a new page in women’s fashion. Her suits were snapped up, not just because they made swimming so much more comfortable, but also because they were a victory in the women’s liberation movement.

Up until the mid-1920s, police would patrol America’s beaches and measure the length of women’s bathing suits, but these rules were soon to be broken as women in Europe and America fought for equal rights. Mixed beaches were just the next step.

Politis grew up in the coastal Athens suburb of Glyfada, right next to the beach and loving everything about it, so photographs of early bathing suits – which seem “so charming and funny” – would hardly have escaped the collector’s notice.

“I was enchanted by the ladies in the full-body suits with their little parasols. The same with the men, with the mustaches that were favored back then and also the big one-piece suits that were sometimes a single color and sometimes with broad stripes. But they were sleeveless, as men were granted that luxury a lot earlier,” he says.

Part of this collection has been used in the bilingual (Greek-English) coffee table book “Palaio Faliro 1900-1960: Photos from the Archive of Nikos Politis,” published in 2014 by the Palaio Faliro Municipality, while another part of the collection will furnish a second book dedicated to the Athenian seaside resort of Vouliagmeni, due for publication soon.

Most of the collector’s photographs concern the advent of mixed beaches, a development that was by no means a simple affair. Before men and women were allowed to swim in the same area, police would patrol the city’s coasts looking to arrest men trying to infiltrate the ladies’ bathing spots.

But time always bring change and another milestone in beach culture was when fun at sea stopped being the exclusive privilege of the rich and became popular leisure, as was the case in England in the 1930s, when factories closed in August and their workers sought some respite at the beach. Coco Chanel also left her mark in the 1920s, when along with comfortable trousers and short hair, she also made suntans all the rage, smashing the convention of pale skin being regarded as elegant.

All of these changes occurred in Greece as well. There are newspaper headlines from 1916 hailing the first mixed beaches and also a rumor that a young lady was behind an anonymous ad placed in a 1917 newspaper calling for supporters for a campaign for more mixed beaches. As the trend spread across resorts from Athens to Thessaloniki and Piraeus to Crete, beach policing ebbed, stopping completely in 1927.

The next milestone was the two-piece bikini, created by French auto designer Louis Reard in 1946. When he first tried to present it on a catwalk in Paris, none of the models agreed to wear it, so Reard approached a young woman who danced nude at a casino. The bikini was even banned from the Miss World beauty pageant in 1951. It took the bravery of two movie stars – Brigitte Bardot at the 1953 Cannes Film Festival and Ursula Andress in the 1962 James Bond spy thriller “Dr No” – to popularize the daring new look. Yet even with their significant contribution, the bikini did not really become acceptable until the 1970s.

Minister calls for intensification of talks on return of Parthenon Marbles