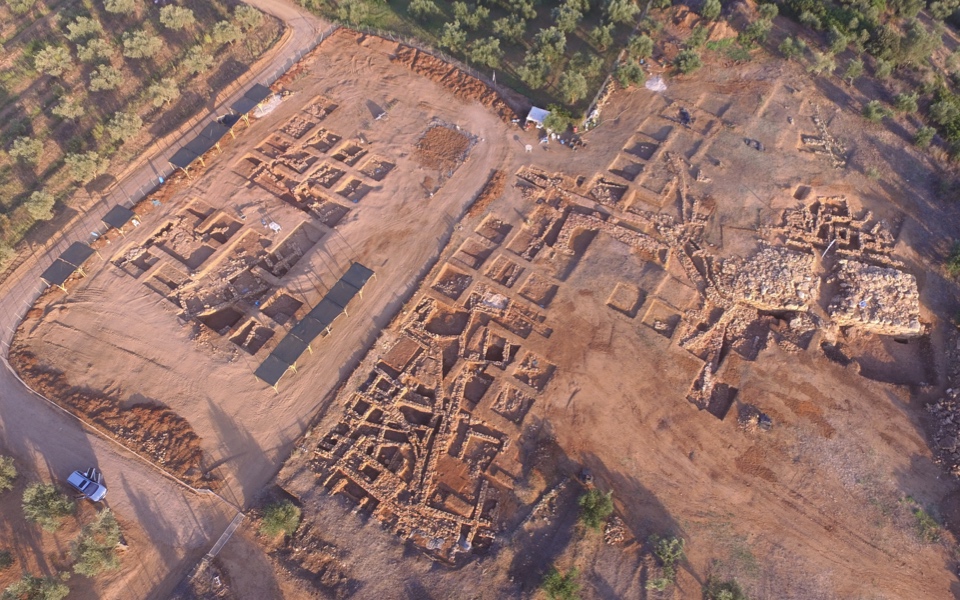 Iklaina was deserted some time after 1200 BC. Every group of settlers and inhabitants who passed through the area after destroyed some of its buildings with newer structures. 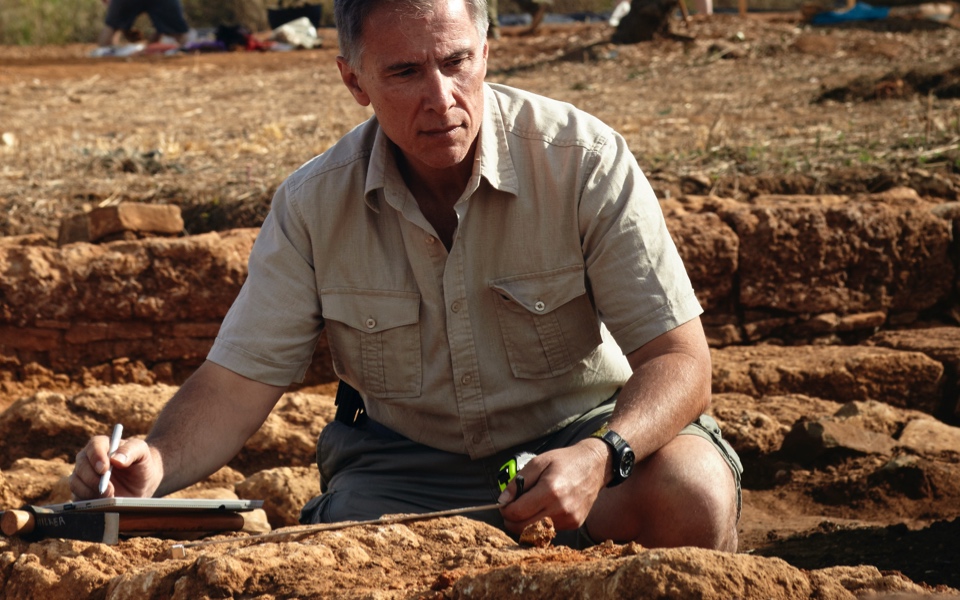 The monumental palace complex of Iklaina, majestic in its well-ordered simplicity, comes as something of a surprise in the hills northeast of the seaside town of Pylos in the southwestern Peloponnese. Gazing over the bay where the Greeks and their allies won a decisive victory for the country’s independence in the Battle of Navarino in 1827, this spacious, organized town, complete with palace, administrative buildings, streets and public squares, is almost the last thing you expect to see among the olive trees. Outside its imposing gates, we see modest homes and workshops that served the town, which was surrounded by cyclopean walls, protecting its luxurious palace and advanced infrastructure.

Alas, these are but reconstructed scenes of ancient Iklaina, which, however, would not have been possible to envisage without the valuable work done at the site by Michael Cosmopoulos, a Greek professor of archaeology at the University of Missouri-St Louis (UMSL) in the United States, who spearheaded the excavations here. The first phase of the dig – which brought up a piece of a stone tablet inscribed in Linear B, the earliest known form of Greek writing, which cast light on how what was possibly the first federal state in the Western world was run – has now been completed.

Phase 2, Cosmopoulos tells Kathimerini, involves the restoration of the palace and other structures and transforming the site into an archaeological park. “There will be two routes, one running inside the enclosure and the other raised above it so that visitors can view the excavated area when it is closed,” he says. Visitors will also be able to download a mobile app that will show them what different parts of the town looked like 3,000 years ago.

“The restoration plan has been completed and once the necessary licenses are issued by the Culture Ministry we will start the work – after finding the funding – while excavations carry on,” says Cosmopoulos.

Iklaina, a palace complex so important in its day that it was mentioned by Homer in “The Iliad” 500 years after it was destroyed, experienced its heyday at the same time as the Palace of Nestor some 10 kilometers away, from 1500 to 1250 BC. The excavation, carried out under the aegis of the Archaeological Society at Athens with funding from UMSL and the US National Endowment for the Humanities, the National Science Foundation, the National Geographic Society and the Institute for Aegean Prehistory – “The Greek state hasn’t had to spend a single penny,” says Cosmopoulos – began in 1999 with the surface study. Now, 20 years on, we know that the Mycenaean city was separated into three sections – administrative, residential and manufacturing – pointing to an advanced economic and social structure.

“A huge cyclopean platform that supported a structure of two or three stories was found inside the administrative quarter, and among its ruins we discovered some 2,000 fragments of a mural depicting nautical scenes, ladies of the court and animals. Around it, there were paved streets – still in an excellent state of conservation – public squares, an open-air sanctuary and a second monumental structure,” says Cosmopoulos.

“Some of the houses outside the administrative quarter were small villas with hearths surrounded by four columns. The amazing thing is that we had a central sewerage system this early in history, with sewers and an irrigation system of clay pipes. The workshops date toward the end of Iklaina’s heyday.”

According to Cosmopoulos, the Linear B tablet was one of the key discoveries. Dating from 1300 to 1350 BC, he says, “it is the oldest Linear B tablet ever found, some 100 to 150 years older than those found at Nestor’s Palace [1200 BC]. As a state record, it reveal the existence of the independent state of Iklaina.”

In 1200 BC, the state of Pylos was made up of two provinces divided into independent regions: nine in the western province and seven in the east, all ruled by the Palace of Nestor. “Iklaina was the capital of one of the regions, the only one to reveal a settlement but also the existence of two levels of government, central and regional, as is the case in modern federal states. Iklaina was occupied by the ruler of Nestor’s Palace around 1250 BC. The administrative center was destroyed by the invaders and only the workshops survived, meaning that it was demoted to a manufacturing hub. These were then abandoned in 1200 BC with the destruction of Nestor’s Palace,” explains the professor.

“All of this is of interest to us today because it tells us about the birth of the earliest states in mainland Greece and Europe, meaning in Western civilization. You know, we live at a time when the institution of the state regulates almost every aspect of our lives, but this was not always the case. This transition from a stateless world to one where the state is the dominant political institution is fascinating,” says Cosmopoulos. “We are not cut off from the past but the last link in a very long chain, and the only way to understand our world is to discover how it was created.”

Keeping the spark of Hellenism alive

He has authored more than 15 books, the most recent being “Iklaina: The Monumental Buildings,” published by the Archaeological Society at Athens in 2018. He has also published more than 100 studies in four languages, including a recent one on Iklaina in the American Journal of Archaeology. He has received three awards for his teaching, delivered more than 200 lectures and directed two other major excavations and training programs, at Oropos and Elefsina in Attica.

Archaeology, however, is not his only field of interest, as he is behind the increase in attendance at the University of Missouri-St Louis’ Greek Studies program from just 15 students to more than 300 a year by expanding its scope from simply teaching the language. He has also established Greek culture centers in the Canadian province of Manitoba and in St Louis, and organized dozens of conferences, events and programs.

“Students from a variety of disciplines come and want to attend classes in our country; so far there have been more than 1,000 young people,” says Cosmopoulos. “There’s a very vibrant Greek community in St Louis that is thirsty for Greek traditions and customs, even though they are third- and fourth-generation Greeks,” says the professor, adding that he is currently conducting a study into this community.

Cosmopoulos has also created an archive that belongs to the university and has ensured the survival of the Greek Studies Chair and the Greek culture centers with endowments from the community.

“We are fighting to keep the spark of Hellenism alive, but this requires coordination between all the different Greek studies programs in the United States and a plan for the next 50 years, as well as an agency here in Greece that will support Greek studies abroad,” he says.

Tomb dating to 1st century BC found intact in Kozani

Statue pair from ancient Aptera to be unveiled at Hania museum

Greek find called earliest sign of our species out of Africa