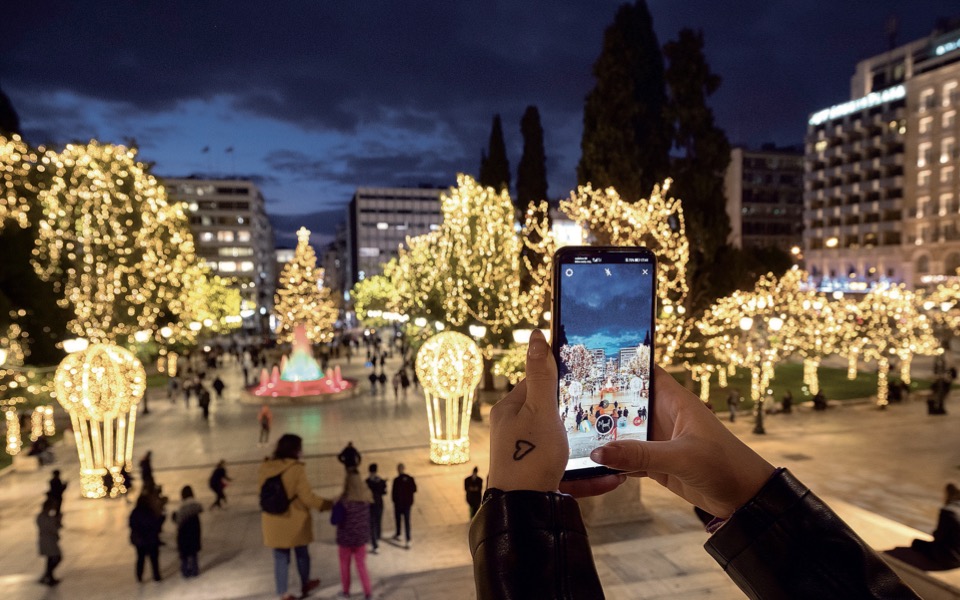 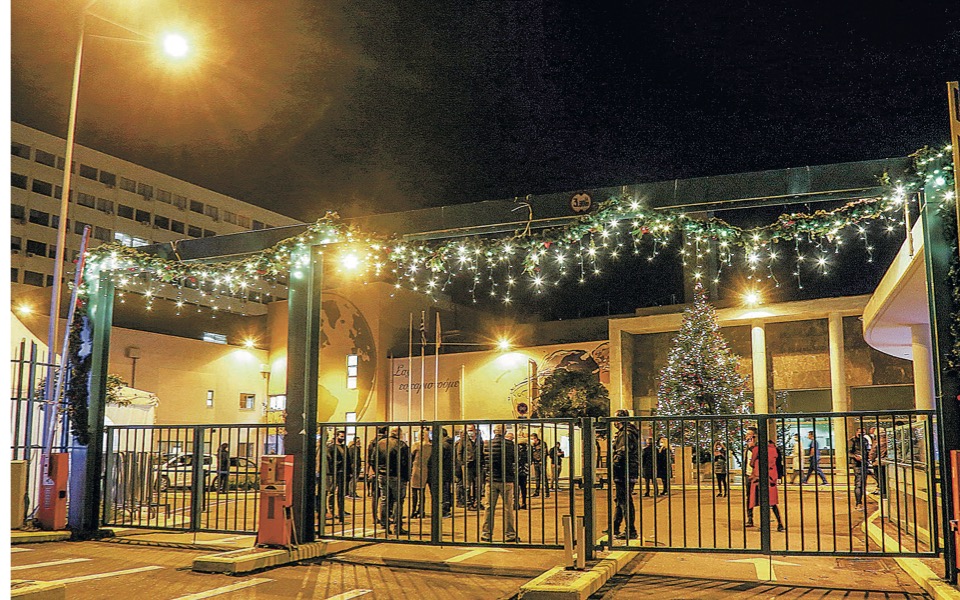 Back at the beginning of March, few would have thought that terms like “restrictions,” “without friends,” “only at home” and “no hugs or kisses” would be a part of any discussion about the Christmas and New Year’s holidays this year.

Yet here we are, in these gloomy and uncertain times. But the holidays will come nonetheless and many municipal authorities, both big and small, across Greece are doing their best to put on a good show and make them as sparkly as possible.

The Municipality of Athens has pulled out all the stops with its Christmas lights around the center, living up to its pledge for a holiday show equal to Europe’s biggest cities.

The lights on the main Christmas tree in Syntagma Square – a real fir – were switched on in a simple yet dignified ceremony that was broadcast live on television, while key thoroughfares like Vassilissis Sofias Avenue and Panepistimiou Street are bedecked with lights, which are the centerpiece of almost all holiday decorations this year, in the absence of the usual theme parks and other Christmas diversions that are usually set up at this time of year.

Omonia Square also has a tree – an artificial one, 15 meters tall – while 27 more have been set up at other key locations.

The City of Athens has spent just under 600,000 euros on its Christmas decoration project (which has been assigned to a private contractor and includes the work involved in setting them all up and taking them down) and is planning to use many of the same features next year. As far as last year’s decorations are concerned – which had sparked controversy, mostly on social media – only the bits that are not damaged will be reused.

Municipal workers in the northern port of Thessaloniki dug out every decorative light and bauble they could find in sundry storerooms to aid in the effort to inject a bit of joy in a city that has borne the brunt of the pandemic’s second wave.

Thessaloniki is not bracing for thousands of holiday visitors as it has in previous years. “We won’t have fireworks, there won’t be any concerts or other festive events, there will be no ‘Christmas village’ and games,” says the city’s mayor, Konstantinos Zervas.

“We are going to be extremely cautious. We are doing better but we need to continue being very careful. The greatest gift we can get this year is for our city to get out of the red zone,” he adds, referring to the highest state of alert on the country’s coronavirus transmission map.

Thessaloniki’s main Christmas tree this year has been placed in the courtyard of the AHEPA Hospital, one of the area’s biggest coronavirus referral hospitals, in a bid to boost morale among patients and health workers at the facility, which has been on the frontline of the pandemic since it started.

Zervas attended a ceremony for switching on the Christmas tree’s lights earlier this month, addressing a small group of hospital administrators. “The true meaning of Christmas is love and solidarity, and this is exactly what we’re offering today,” he said. “From the bottom of my heart, I hope that this battle will be won soon and that next year we can be together again at Aristotelous Square,” he added, referring to the city’s iconic plaza.

The municipality is also putting together 5,500 care packages with food, books and presents for families struggling to make ends meet, while additionally providing material support to the city’s public hospital workers.

There was a super light show earlier this month at the Piraeus Tower in anticipation of Christmas and New Year’s. This building, which is still lit up, is the second tallest in Greece after the so-called Athens Tower and has been out of use for many years, so its revival for the holidays is seen as a symbolic gesture by the port city’s municipal authority.

The main Christmas tree is outside the Municipal Theater and has been called a “Tree of Hope and Wishes” as it is decorated with hundreds of red ribbons containing the wishes of city residents. City Hall has also been illuminated, as has the traditional sailing boat Aphrodite at Pasalimani.

Pasalimani’s old clock tower is also the site of the “Forest of Stars,” an installation of 3D lights that go up and down according to the movement of people around them – great fun for children. Colorful lights are also brightening up the fountains in Terpsithea Square and Zea Marina.

Gatherings and public events may be banned, but the Municipality of Piraeus plans to put on an impressive fireworks show at New Year that can be enjoyed from balconies and rooftops across the city. It is also planning a grand welcome for the first ship to sail into the port in 2021.

This is the first time in many years that the towns of Trikala and Drama will not have their usual Mill of the Elves and Dreamland theme parks up and running over the holiday season – attractions that usually draw thousands of people from all over the country – but both municipalities are aiming to have an online presence to reach out to fans.

“Trikala will be lovely this year as well, though, unfortunately, only for its residents,” says Mayor Dimitris Papastergiou, saying that the central Greek city has been decorated with particular care and sensitivity.

The highlight in Trikala this year will be the illuminated Lithaios River. Named after one of the five rivers of Hades, Lethe (river of forgetfulness), the decision to showcase the Lithaios is also symbolic of the wish that all the ills of this year will pass.

In the meantime, the city will be hosting online music shows and other holiday events, while the countdown to New Year’s will take place at Trikala’s main clock tower, which is visible from most parts of the city, inviting residents to all join in from their balconies.

In Drama, the municipal authority is already planning a grander version of the usual Dreamland celebrations for Christmas next year, promising the best event in 15 years. In the meantime, it too has decorated the city’s streets and squares.

Zappeion statues come into the light

Acropolis to be seen in a whole new light

SNFCC reopening, visitors must pre-register for all events