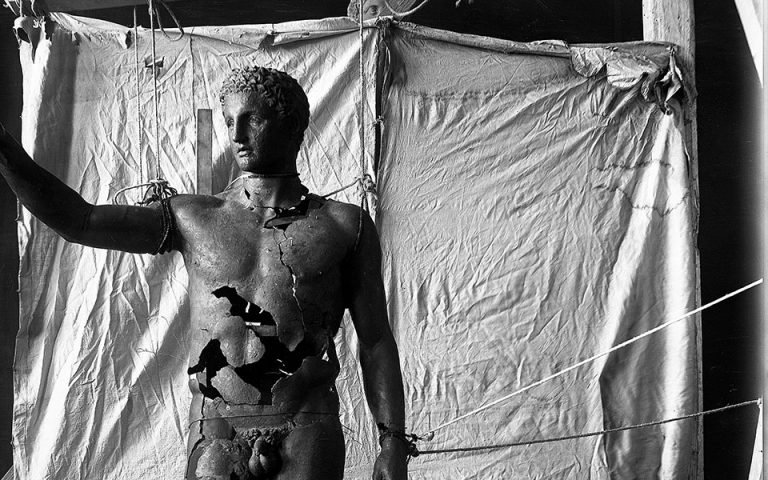 The Antikythera Ephebe before the statue was cleaned and as restored temporarily by archaeologist Panagiotis Kaloudis. [Ioannis Svoronos, 1903] Visiting archaeological museums, we are often moved by the idea of the work that went into discovering so many artifacts and bringing them to light, but rarely do we go to the trouble to learn about what happened after that, how these treasures were salvaged and restored, and by whom.

Chemist Othon Rhousopoulos (1856-1922) is one of many such unsung protagonists of the restoration lab. A pioneer in the field since 1888, he dedicated a large part of his career to applied chemistry in archaeology and conservation, and even though his methods were controversial, some of them are still used to this day.

For Dr Georgianna Moraitou, head of the National Archaeological Museum’s Department of Conservation & Archaeometry, Rhousopoulos was the “founder of modern conservation in Greece.” In her recent monograph, “Othon A. Rhousopoulos (1856-1922) and the Early History of Scientific Archaeological Conservation in Greece” (published in a bilingual Greek-English edition by the Ministry of Culture and the Archaeological Resources Fund), Moraitou sheds light on the life and work of this emblematic yet also misunderstood personality of the late 19th and early 20th century. She also demonstrates Greece’s contribution to the principles and ethics of conservation.

Rhousopoulos was born into a wealthy family headed by the renowned archaeologist Athanasios Rhousopoulos. He studied chemistry at the University of Athens and went on to Hannover and Berlin for further education. He returned to Greece in 1885 and was made a professor of chemistry at the Military Academy, while he also taught at the University of Athens, though without pay. In 1894 he and physicist Ioannis Gerakis founded the Academy of Commerce and Industry, an institution that helped train the captains and hands of Greek industry until its founder’s death in 1922. He was posthumously nicknamed “the Greek Jules Verne” after the French pioneer.

The moniker was earned for his contribution to the economy, Moraitou tells Kathimerini. “He was a trailblazer in Greece’s industrialization and in the economy of the time. He introduced the German model of technical training at a time when many of the people with the ability to study dreamed of becoming doctors, lawyers or philologists, while everyone else had to settle for unspecialized manual labor. It was, therefore, important to have people trained in industry and commerce,” she says.

“Othon Rhousopoulos translated internationally recognized chemistry manuals, wrote his own educational books, simplified the terms of chemistry so it could be understood by the layperson and contributed to the nomenclature, which did not exist until then. He also published an incredibly successful magazine-bulletin on commerce and industry that in its heyday sold 12,500 copies in Greece and to Greeks abroad,” she adds of his multiple contributions.

In the field of archaeology, Rhousopoulos was responsible for the conservation of some of the most important treasures of the Acropolis Museum and the National Archaeological Museum (NAM), including the kores statues and finds from the Antikythera shipwreck. Some of his most important work was in saving bronze artifacts from the NAM’s Mycenaean and Egyptian collections from copper corrosion, or “bronze disease.”

At the Acropolis Museum, he spent a year from 1888 to 1889 stabilizing the pigments on the famous kores statues and on the sculptures of the Older Parthenon using a diluted solution of sodium silicate. He stabilized the colors using inorganic materials that can still be traced today and which have not caused any damage to the artifacts, explains Moraitou. When he first started working in the field, he used methods picked up in Berlin, but soon developed his own techniques. These included his treatment for bronze disease using electrolytic reduction, which was criticized by his contemporaries in archaeology because it removed the natural green patina of bronze antiquities, something Rhousopoulos and other scientists at the time thought would ultimately eat through the objects.

Moraitou notes that the method had been approved by the relevant Culture Ministry committees, stressing that Rhousopoulos was not free to make decisions without consultation. “Electrochemistry was already known to science, but he innovated it. Neither [Panagiotis] Kavvadias nor [Ioannis] Svoronos liked the method, nor did many other [archaeologists] in the years that followed. They claimed that Rhousopoulos’ method was chemical, when it was, in fact, electrochemical. This was criticism without merit that did not make a positive contribution. It’s like blaming doctors for the methods they used before penicillin was discovered,” she says.

At the NAM, Rhousopoulos was brought in to work on the Egyptian collection following reports in the press that the museum was allowing its bronze antiquities to rot. “He was taken on just for this project at first and had to report directly to the minister,” says Moraitou, adding that he had often stressed the need for the museum to be equipped with a proper conservation laboratory of its own.

In her monograph, Moraitou also informs readers of the situation in the field of antiquities conservation in Greece at the time. She says that “Rhousopoulos revolutionized it with his scientific approach,” but also stresses the important contribution of Kavvadias, the then curator general and general secretary of the Archaeological Society, in the area of conservation.

The writer also compared the situation in Greece to the international framework, explaining how the restoration of antiquities in the late 19th century was a task assigned to sculptors, welders and craftsmen from various areas of expertise. More difficult challenges (such as corroded metals) were presented to the chemists on special committees, as a multidisciplinary approach was considered vital when it came to ancient artifacts. Yet the science of conservation came very late to Greece compared with other parts of the world. It did not become a subject of study at the tertiary level until 1985, and was taught only at technical colleges until 2018, when it was elevated along with the status upgrade of the University of West Attica. Unlike in the past, the Culture Ministry today has a staff of conservation scientists.

Hounded for his vision

The work of Othon Rhousopoulos and Ioannis Gerakis’ Academy of Commerce and Industry was treated “almost with hostility” by the establishment of public technical education at the time. The endeavor came under such a barrage of fire that it lost the support of an important benefactor, Grigorios Maraslis.

Dr Georgianna Moraitou claims that he was fought by the establishment of Athens Polytechnic because he was not part of the public education sphere, but worked in a private capacity. The Greek Polytechnic Association fought him in the educational arena by preventing his academy from being upgraded into a university but then went on to emulate him by establishing a polytechnic school.

In many lectures and articles, Rhousopoulos also championed the need for a ministry of commerce, industry and agriculture, as well as an economy ministry, institutions that did not exist in his earlier days. In 1914, however, he was appointed general secretary of the newly established National Economy Ministry and a year later was elected as a representative for the northwestern Greek region of Florina in the Epirus government. His efforts to spearhead the development of the country’s wealth-producing forces continued unabated in Parliament.

Rhousopoulos died in 1922 at the age of 66, and in the last issue of the academy’s bulletin, his wife and business partner Eleni Naoum wrote: “The Greek state pursued us relentlessly for 28 years… Had our institution been a gambling club or a brothel, it would not have suffered such persecution.”

For archaeologists, at least, 2020 was a good year