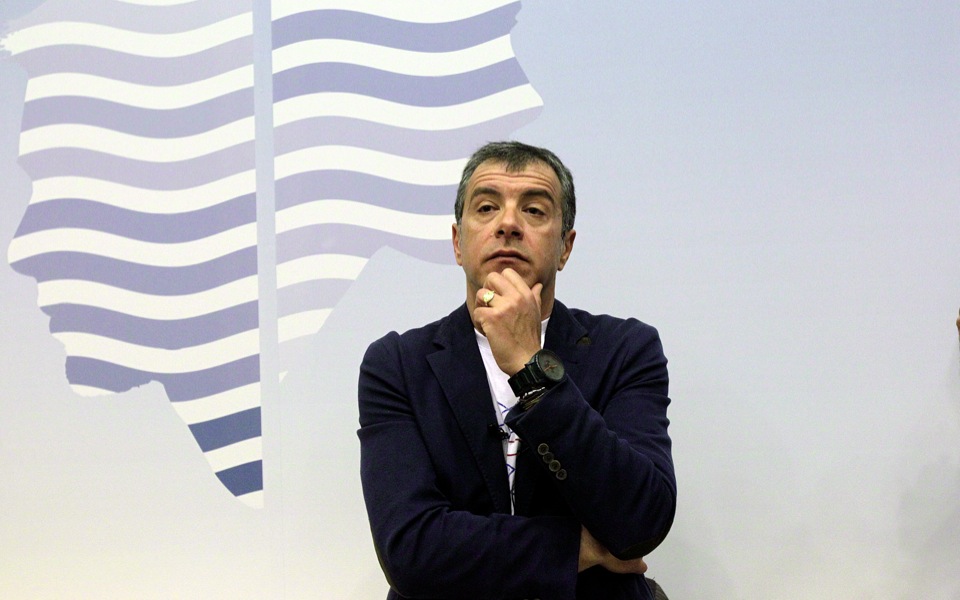 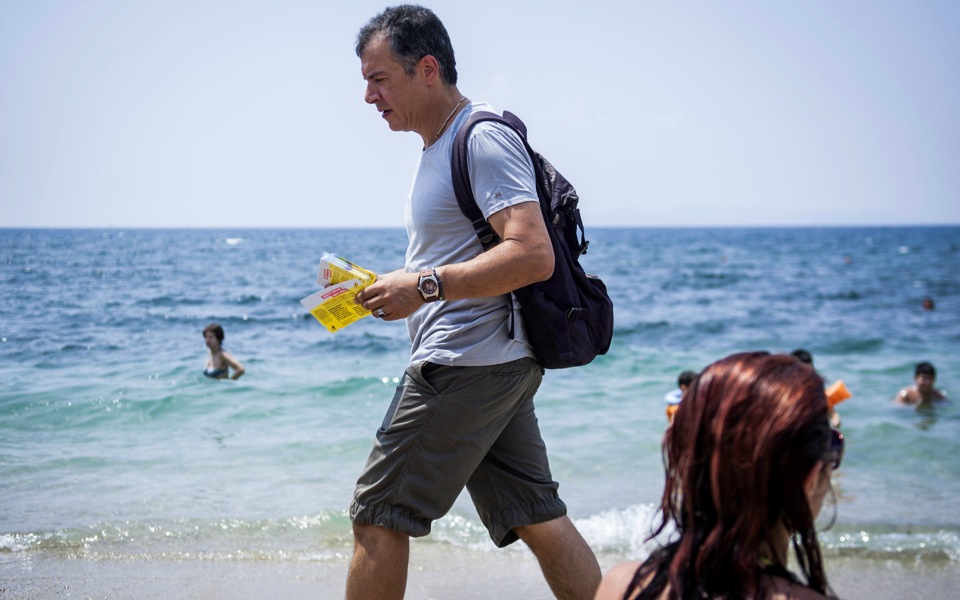 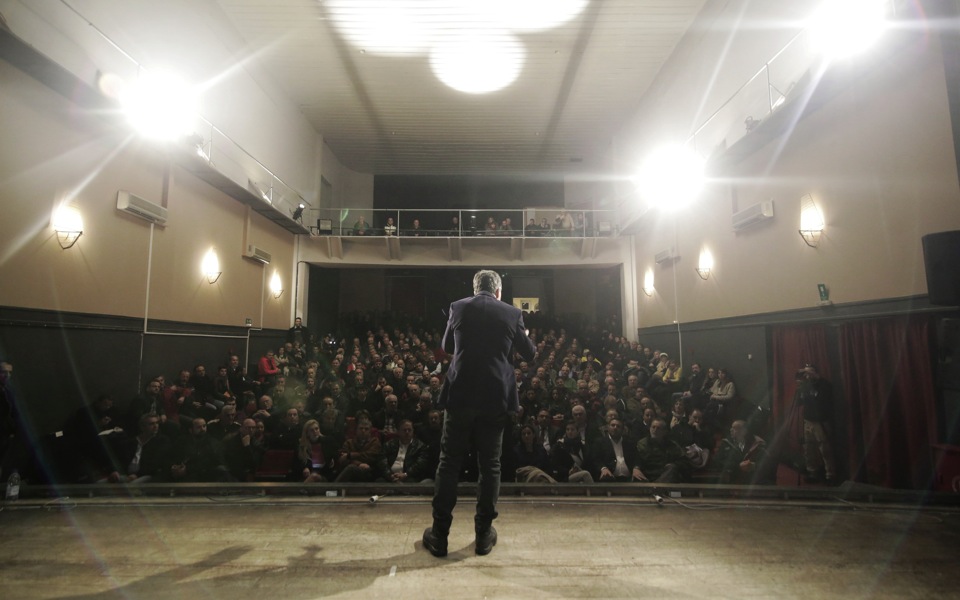 The centrist pro-market party won 4.09 percent, about 2 percent down on its previous result eight months ago, and far from the 10 percent target set by its leader, Stavros Theodorakis. In absolute numbers, it lost 151,780 votes compared to January’s elections. Potami was reduced to sixth place, behind neo-fascist Golden Dawn, the left-of-center PASOK socialists and the Greek Communist Party (KKE), as well as front runners SYRIZA and ND.

Exploring the reasons behind the party’s poor performance reveals a mix of political circumstance, character, strategy and ideological credo. Some of the traits have plagued other liberal projects in recent years.

Extreme polarization – partly because opinion polls had pointed to a tight race between SYRIZA and New Democracy (ND) – no doubt stole a considerable chunk of votes away from Potami. Early exit poll data indicate that 17.2 percent of those who voted for the party in January defected to SYRIZA, while another (surprisingly smaller) 14.5 percent went to ND. Just over half of those who voted for Potami in January renewed their support. In the end, and much to the embarrassment of most pollsters, the leftist party of Alexis Tsipras went on to win the vote with a comfortable 7.5 percent margin.

Potami’s purportedly pragmatic strategy to announce that in order to “save” the country it would be willing to join either a right-wing or left-wing government and serve as the balancing force did not seem to resonate with voters.

“The deeply nonpartisan message ‘I can cooperate with ND and SYRIZA if it means preventing the country from being left without a government’ eventually backfired. ‘In that case,’ voters said, ‘why not give my vote straight to ND or SYRIZA?’ And this is what they did,” Potami candidate Petros Tatsopoulos said on Facebook. Perhaps more controversially, Tatsopoulos said the party should shed its pretentions of being the “virtuous loner” and seek to join forces with PASOK.

Founded in February last year, Potami found itself slap-bang in the middle of a tectonic shift in the Greek political landscape caused by the devastating debt crisis. As the two mainstream parties PASOK and New Democracy lost their supremacy, smaller movements began mushrooming along the bailout fault-line, aligning themselves either for or against.

But Potami positioned itself as a post-bailout and post-political movement firmly anchored in the European Union and the eurozone. It shunned the typical trappings of Greek politics. Instead of flag-waving rallies, its leader, a former TV journalist, opted for small town-hall meetings with a seated audience.

Instead of creating a youth wing replete with chants and slogans, Theodorakis wandered around beaches passing out portable ashtrays to smokers and set up eco-friendly camping tents as campaign kiosks to attract disenchanted urban voters. He preached pragmatism, reason and common sense while calling for radical reform of the country’s dysfunctional public sector. Around him, he gathered a motley crew of academics, businessmen and nonpolitical individuals.

Less than a year after its creation, Potami seemed to have succeeded where other liberal-leaning parties had failed after gaining 6.05 percent and 17 seats in Greece’s Parliament. But then things turned sour.

The aversion to populism was key to the party’s failure, according to Stathis Kalyvas, professor of political science at Yale. Given Theodorakis’s visibility and popularity, Kalyvas says, the absence of populism meant that his appeal would find a limited market mostly consisting of intellectuals and intellectual professionals.

“There are just not as many of them, especially in a time of crisis when downwardly mobile intellectuals tend to be particularly spiteful and hence not open to the serious and optimistic message of Potami,” Kalyvas said.

However, its cerebral message was not Potami’s only impediment.

In Parliament, with few exceptions, Potami MPs seemed muted and awkward. Despite its abhorrence of populism, the party’s most visible MPs, apart from a former general secretary of revenues, became a second-rate actor and a former travel show presenter – neither academics nor intellectuals. Its slick marketing was not accompanied by a clear political message. And Theodorakis himself lacked political gravitas, often giving the impression he was acting the part of a political leader, reading his lines in his smooth TV presenter’s voice.

To make matters worse, Theodorakis’s dispassionate everyman was obliterated by the supernova of Alexis Tsipras, the youthful, magnetic leader of SYRIZA who was convinced – and convincing – that he was on a mission to save Greece and change Europe.

“Even if Theodorakis had picked populism, the niche was already taken by the time he emerged, and SYRIZA had a first-mover advantage,” Kalyvas said.

Although Theodorakis assumed responsibility for the poor electoral result, he did seem to claim the high ground, feeding allegations of elitism.

“Maybe in times of crisis society is not in a position to make a cool assessment of the situation and to give its support to a party that represents reason and progress,” said Theodorakis, lending weight to critics bothered by the party’s alleged elitism and intellectual snobbery.

Writing for the website Protagon in the wake of election day, liberal author and former Potami member Nikos Dimou too appeared to suggest that the root causes of defeat lay with the public, and not the product.

“Everyone, even rivals, agreed [Potami] had the best officials. But that too was destroyed by this abhorrence of excellence. You put a man like [constitutional expert] Nikos Alivizatos in a prominent position? You’re asking for it. A party ruled by excellence and reason has no business in a Roman bazaar,” he wrote.

Much in keeping with its post-political profile, Potami decided to skip local party organizations across the country, a standard but costly tradition for Greece’s mainstream political parties. Instead, Potami relied for the most part on an Internet-based campaign that affected its influence – particularly in the Greek countryside.

“In a low-turnout election, where MPs were elected according to their position on the lists of party candidates [rather than the ‘crosses,’ or votes, each received], campaigning is crucial. As a result, Potami’s presence was weak outside Athens,” said Spyros Kosmidis, a political expert at Oxford University.

On top of that, Potami was damaged by low turnout among young voters, the party’s main reservoir of support.

None of the liberal parties launched in Greece in the past 15 years – including the Liberals of Stefanos Manos, Drasi, Democratic Alliance and Dimiourgia Xana (Recreate Greece) has been able to break into the mainstream. Analysts tend to point out Greek liberals’ inability to communicate their message, to do single issue politics and get involved in the daily grind of Greek politics. Another reason is the vanity of small differences: Despite their similar platforms, parties are unwilling to compromise on basic issues, leaving the country without a meaningful center-left.

It is happening again. As Potami’s licks its wounds, the once-dominant PASOK is waiting around the corner. A subtle overture from Socialist officials on Wednesday was turned down by Theodorakis, who said that the party would either “remain independent or break up.” He said he was not willing to see the party “become an appendage to New Democracy, PASOK or SYRIZA” and called a congress for the beginning of December, where members are expected to debate what went wrong during the election campaign.

“I find it hard to believe that PASOK and Potami would join forces so long as Theodorakis remains in charge of the party. Timing will certainly play a key role in any future move,” Kosmidis said, adding two more critical factors: the identity of ND’s next leader and the trajectory of SYRIZA’s popularity.

Purists certainly fear that a merger would pollute Potami beyond recognition. The recent election of Fofi Gennimata, an old-school PASOK apparatchik whose father was a senior party official, as the Socialist leader, has fed to skepticism. On the other hand, analysts say a collaboration would bring together the newcomers’ know-how and intellectual seriousness with the Socialists’ far-reaching network of local organizations.

For Alexandra Patrikiou, an expert in political history, a merger would be a boon for the country’s fragmented center-left. But it also seems inevitable for Potami.

“The absence of a clear political identity was not necessarily a handicap. It made the party more flexible and more adaptable, at a time when that was necessary,” Patrikiou said.

“But this absence renders the party hostage to circumstance. It means that it will not be able to survive long-term unless it transforms itself into something different. Today’s strength will become tomorrow’s weakness,” she said.

Greek election scenarios: the good, the bad, and the ugly

The death of European anti-austerity says a lot about austerity