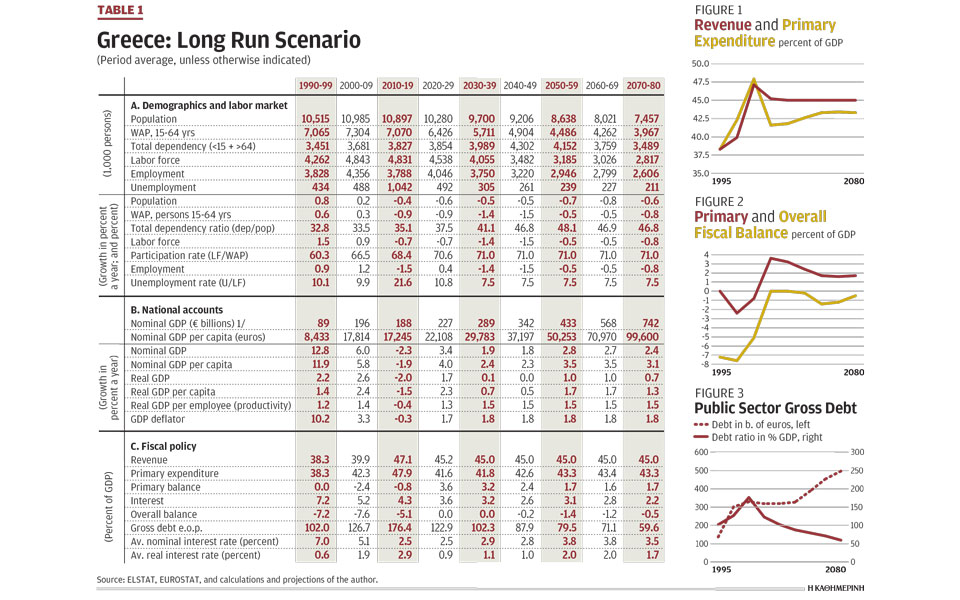 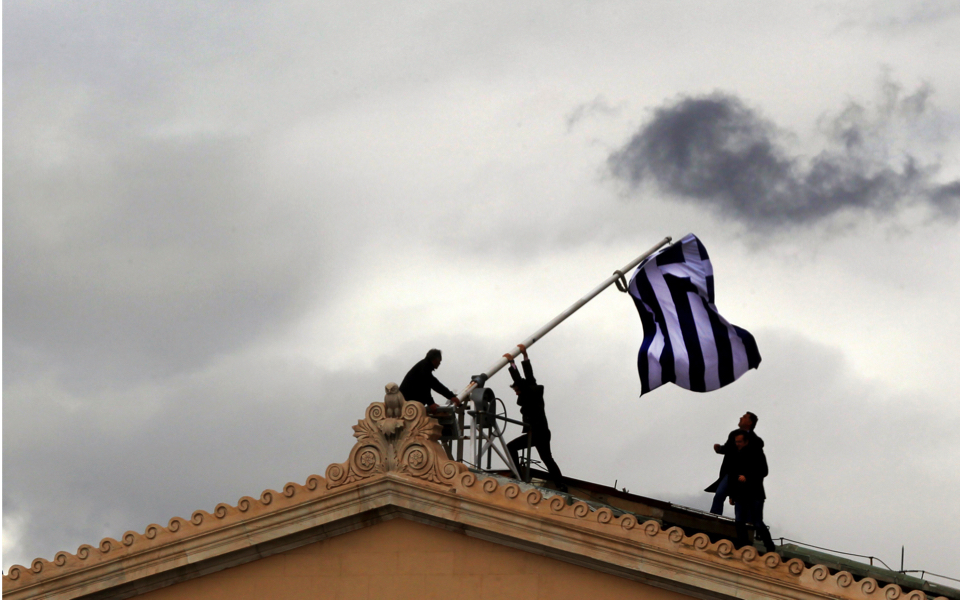 Odysseus is stuck in the 180-percent-of-GDP debt land. He dreams of his beloved Ithaca, which is below-60-percent-of-GDP debt land. Life is much sweeter where he came from, and he wants to go home. Fortunately, Odysseus is cunning and courageous and is willing to travel long, with discipline and flexibility. He has many more men and women to take home now, about 10.5 million, rather than the group that accompanied him on a similar trip from Troy so many years ago. Can we help to bring Odysseus home?

He knows a few things. The journey will not be easy. He will be taunted that his voyage is impossible. He will get all sorts of advice. Some will make sense, others will be self-serving. And, oh, at every turn, there will be the sirens, the agents of debt, to tell him that if only he took on some new debt, he could make promises to his passengers on their long journey to have things easy. Listening to the sirens of debt, Odysseus knows that he would not need to pay back all this debt; that would be for his young passengers to do. So, he would really be playing with OPM – other people’s money, or, as we might say, TPM – taxpayer’s money. If you can promise sweets and never personally have to pay for it, that is what makes the sirens so seductive. So, we need to stop up the ears of the crew and bind Odysseus to the mast of sound agreements and constant monitoring; one should not be seduced by the sirens again – the agents of debt.

Odysseus has chosen well his moment to set sail. The flow imbalances are in better shape: The fiscal and external balances are causing few new debt pressures at the moment, so there are no leaks of water again rising in the boats. The sun is shining and partner countries have promised to lend a helping hand if the seas were to turn rough again.

Odysseus called on all passengers the evening before departure on this arduous trip to give a rousing speech. He startled them by explaining that the voyage would take 62 years, about the challenges they would encounter, and that he would no longer be alive when they arrive at Ithaca. But, he said, “we need to do this for the new generation who will then be in charge.” He had one piece of good news that calmed the people somewhat: The standard of living would slowly increase, on average, during this voyage, even though the headline rate of growth would be moderate. “This is possible if we stick to the plan and stay flexible,” he said. “If we succeed, conditions will gradually improve as we get closer to our destination.” Then, for a smaller group of commanders, he laid out his plan in more technical terms.

He went through the preliminaries and assumptions once again:

– Demographics cannot be denied; the population would gradually decline.

– With it, employment would decline, limiting headline growth, after an initial recovery.

– Competitiveness policies need to keep inflation at or below 1.75 percent a year.

– These conditions imply logically that real GDP and nominal GDP will grow moderately. “Steady and predictable is better than fast and disastrous,” said Odysseus.

– The fiscal balance starts off in much better condition, with some caveats:

* Some debt is generated outside of the fiscal perimeter; this needs to stop;

* The effective interest cost of debt will rise over time;

* Aging costs are manageable as long as the reforms hold; Odysseus warned against easy promises that these reforms could be canceled without any damaging effect – “this is not correct,” he said.

Based on this framework, the captain had plotted the following course, which, given the limitations on growth and other capacity considerations, would take until 2080 to complete:

With the planned near-term fiscal expenditure plan, and the recovery in nominal GDP, primary expenditure (yellow line) was on track to decline to 41-42 percent of GDP in the 2020s (Figure 1). Revenue (red line) would ease to 45 percent of GDP as some tax reform would aim to lessen unfair distributional burdens and broaden selected tax bases for improved revenue sustainability. These objectives are already in the government’s medium-term plan. Over the longer run, revenue would be kept at 45 percent of GDP and primary expenditure could very gradually increase as growth advanced and the debt ratio to GDP starts coming down.

“The challenge,” noted Odysseus, “is to keep the budget in balance (no new debt) until we have passed the most treacherous part of our journey” (yellow line in Figure 2). “Thus, the primary surplus will ease only gradually, and will be kept positive until we arrive at our destination.”

“But, captain,” said one of the commanders, “people say that this has never been done before and cannot been done.” “Our choice seems rather straightforward,” noted Odysseus. “Would you prefer to drown in debt for sure, or establish that we will determine what we can do, rather than others determining on our behalf that we will fail?” “Any other questions?”

“Captain?” asked another, “Does a balanced budget mean that we cannot practice countercyclical fiscal policy? Surely, the voyage is long and there may be moments that we need support for activity as the boats may be dead in the water. At other times, there may be squalls and we need to ease off the speed, lest we hit some rocks.” “We can still practice countercyclical policies,” explained Odysseus, “but this must be done with a balanced-budget multiplier. Thus, if we want more spending, we need to raise taxes to pay for it. If we cut spending, we can cut taxes by an equivalent amount. The increase will support growth, the reduction will slow it down, but the fiscal impulse will be less powerful than an imbalance financed by new debt.” This caused a stir among the men; never heard of this before – if you want more spending, you need to pay for it, rather than presenting the bill to the children!

“The leadership may say they favor a balanced budget, but will they do it, captain?” said the men. “This is where we need to stop up our ears and ignore the sirens,” said Odysseus. “Sound agreements on the course of action, and good monitoring are of the essence.”

“How can the people see that we are on course and keep our promises?” asked the men. “Without something really visible and easy to monitor, we may lose their support.” “We must monitor one variable above all others,” said the captain. “If we run a ‘true’ balanced budget, then the debt, in euros, will not grow.” “So, the real test of our course is whether we can say whether the stock of debt is growing or stays the same, or even comes down.” “If we stay on course, the debt in euros will not grow, and the debt ratio to GDP will decline, eventually to below 60 percent of GDP, with the policy objectives explained above,” said Odysseus. “Figure 3 shows our course.” “Only when we get closer to our destination will we be able to place some net debt again,” he added.

The men only now fully realized the challenges that would await them on their way home. “It is going to take long and we must stay the course,” they said, but they were reassured that a path exists that would get them home.

The job now was to implement it and monitor any deviation closely. Out of his log book, which contained the navigational coordinates for this long voyage, Odysseus then conjured up a summary table that he distributed to all the commanders of the fleet, each being responsible for a vessel in the armada (Table 1). “This is the plan,” he said. “There are a few concluding remarks that I wish to make:

– This plan looks linear and smooth, but the voyage will not be. There will be volatility and ups and downs. If we look through this noise and stay the course, we will arrive at our destination.

– If we can use our privatization program to sell some assets and reduce the debt, then we can arrive early; and/or we can absorb some surprises that may still come.

– Debt is not what makes an economy grow. Productivity and competitiveness are. That is why we need to ignore the sirens and instead strengthen our structural policies to be most efficient.

– If the critics say that ‘this cannot be done,’ we need not say anything, but only do. It will not be the first, nor the last, time that Hellas was underestimated.

Some friends who were kind enough to read this story to give me feedback asked me whether, perhaps, I had been to Amsterdam, sat in a coffee shop, and smoked something illicit? Sixty-two years for a plan in a country that has hardly demonstrated political cohesion and cooperation? What is the likelihood that Greece can do this?

Au contraire, I told them. Greece should not try to rush a solution. Greece could solve this problem much quicker, but this alternative is a terror regime to squeeze the public for money until the pips come out. The debt may come down quickly at first, but whether this is sustainable or in any way socially optimal is very much in question. A third alternative is to default, or ask for more debt forgiveness. Does Greece really want that? The exit from the programs was to demonstrate that the country can be its own guardian of the future, not driven by the preferences of others. So, that does not seem assuring either.

Instead, I would place this conundrum on its head:

– Recognize the reality of demographic transition which slows economies down.

– Decide that if you borrow money, then you have to pay it back, lest you prefer to play fast and loose with your reputation, which never ends well.

– Be realistic, disciplined, and yet flexible. If a problem has taken 200 years to evolve into the debt situation of today, then it is OK to plan for 62 years of gradual resolution.

– It is not austerity if per capita incomes continue to advance at a steady, albeit moderate pace (which is in any event determined by real factors, not the debt).

– Take 62 years because that does not squeeze the public until the pips come out; thus, we need a humanitarian solution that is monitorable and acceptable to most reasonable actors that accompany Greece’s voyage.

– Work with partner countries to find ways and options to get the debt down in an opportunistic (faster) manner along the way. Privatization for conditional debt relief (I will explain later), and possible agreements to roll over the inter-country debt with EU partners at favorable interest rates until the horizon date of 2080 should be explored. There is still room for all partners to help Odysseus come home.

– Monitoring by the Greek public is easy: no more increases in the nominal stock of debt. If and when this happens anyway, the government needs to explain why and what for, and also include what the return ticket from this deviation looks like.

Bob Traa is an independent economist. This is the 13th in a series of articles by him for Kathimerini titled “Notes for Discussion – Essays on the Greek Macroeconomy.”

Possible pressures on the public debt

If the economy overheats, expect a downfall

A possible path for employment in the years ahead