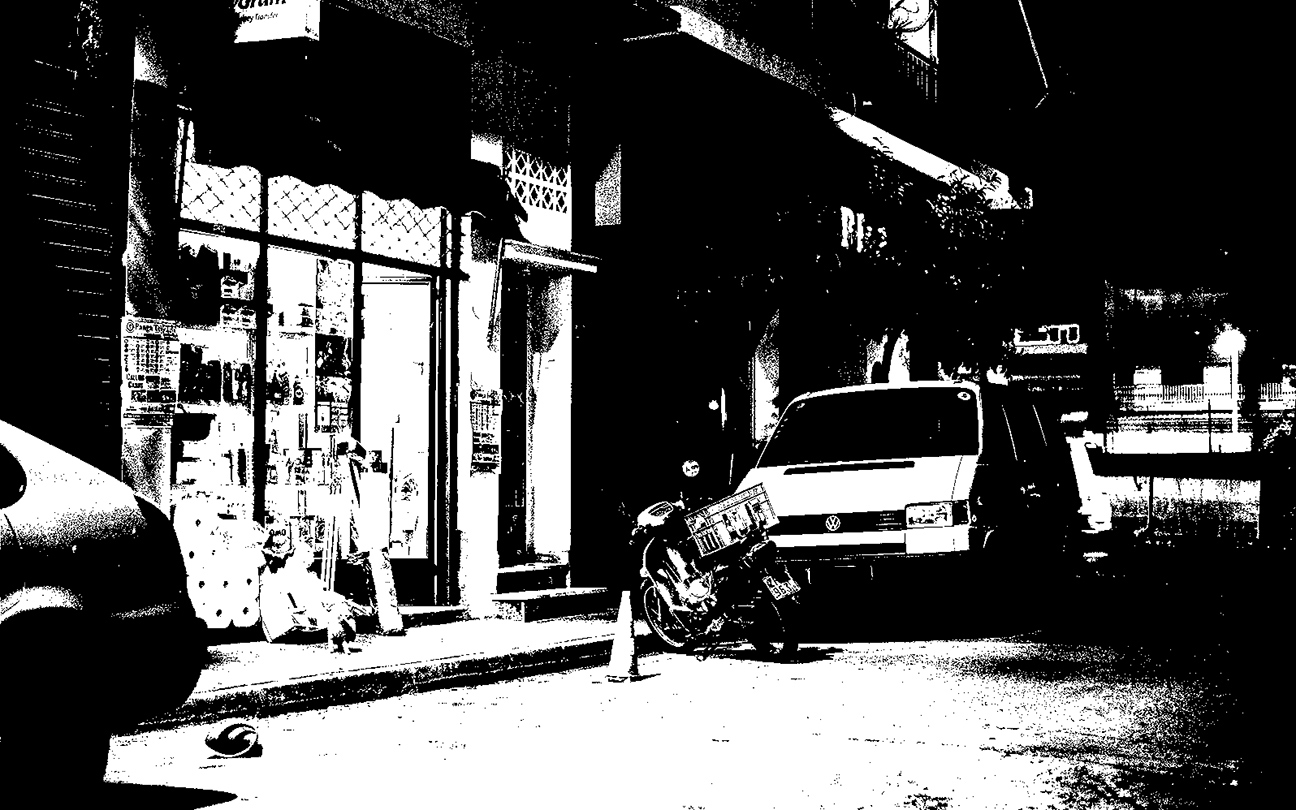 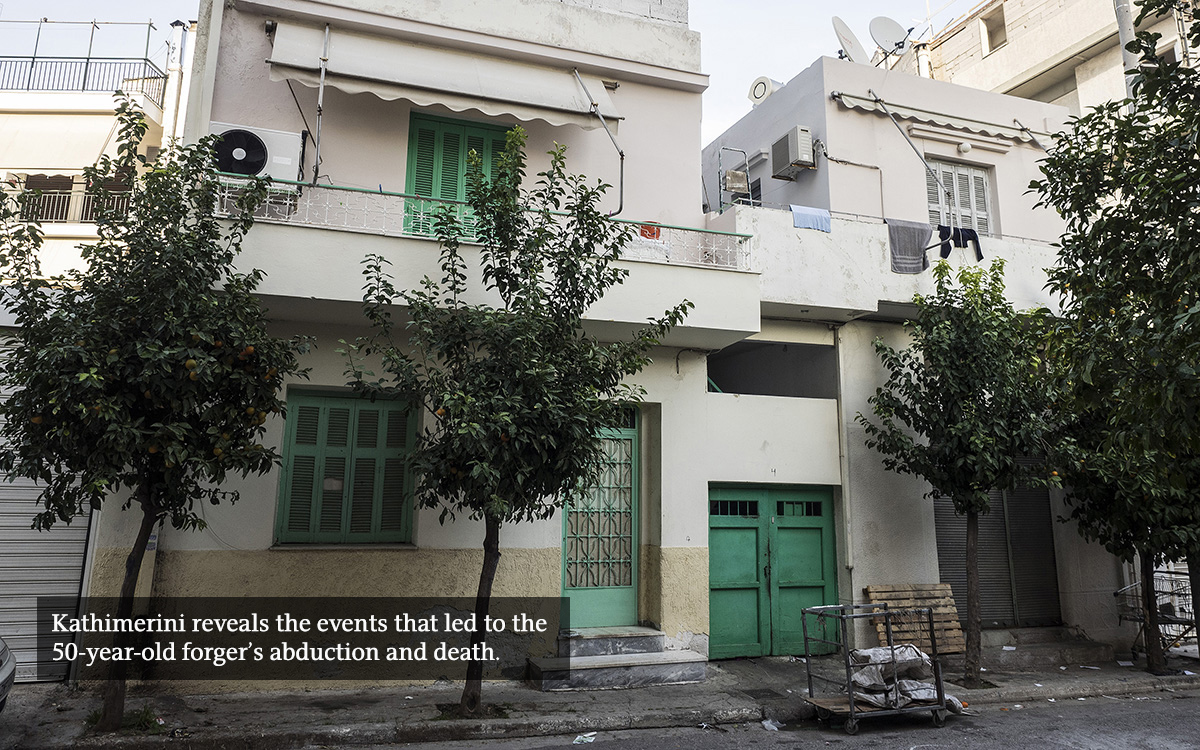 He was 50 years old, with thick hair and a mustache. He had come to Greece 18 years earlier, leaving behind his wife and three children in Pakistan. In April 2012, when he closed the minimarket he had been running in Oinofyta, northeast of the capital, he moved to the neighborhood of Peristeri in western Athens. He liked to be called 'Master.' And for the Hellenic Police (ELAS), it was an apt nickname for the man identified as A.H., a master forger.

Master lived on Vostitsis, a small one-way street lined by bitter orange trees and low-rises. He rented a small rooftop apartment in a two-story building that had no doorbell. He enjoyed hanging out with his brother at the workers’ housing estate in Rendi and had never come onto the radar of the Greek authorities. That was until April 6, 2013, when Master’s 47-year-old brother, identified as I.M., appeared at the Peristeri Police Precinct to report his abduction.

“He was approached by seven people outside his home at night and after telling him that they were police officers, they forced him into a car,” the 47-year-old testified to police. The following day, Master's brother received a call on his cell phone. “‘They’re beating me. Please give them the money as fast as possible,’ he told me. He saw gun, knives and wooden sticks in the place where he was being kept. He sounded scared and was crying,” I.M. said in an additional statement.

A.H., aka 'Master,' lived on the small rooftop apartment in this block.

The kidnappers kept calling two or three times a day using the two SIM cards Master had on him. According to numerous statements to police, the kidnappers were demanding that A.H.’s brother pay a ransom for his release, sometimes asking for 15,000 euros and other times 50,000 euros.

“On April 8 I got a call warning me that if I didn’t have the money by that night they would kill my brother,” the 47-year-old testified. He began trying to collect money from friends and relatives; quite a few people stepped forward to help as Master appeared to be quite popular among the Pakistani community in Athens. Fellow countrymen who spoke to Kathimerini as part of its investigation into Master's abduction attributed his nickname not to his skill as a forger but to his lengthy career at a textile factory in Pakistan.

Following several months of investigation and after securing a court order to tap private telephone conversations, investigators at the Attica homicide division ascertained that this was not a simple case of kidnapping. During their preliminary testimonies, most of the suspects that came under investigation provided evidence incriminating themselves and others in a wide migrant smuggling network moving people from Greece to Italy.

Greek court documents reveal the action of a smuggling ring in Athens.

In July 2014, over a year after Master was kidnapped, 21 suspects (11 persons unknown) were indicted on charges of running a criminal organization, migrant smuggling, kidnapping, blackmail and deadly use of force. Among those arrested were Kurds, Pakistanis and Greeks, as well as one Syrian man and an Indian national. One of the Pakistanis was Master’s 47-year-old brother.

Speaking to people who knew A.H. well and studying the court’s case files, Kathimerini presents the events that led up to the 50-year-old’s abduction and eventual death.

It was 4 a.m. on April 9, 2013, when Master’s brother arrived, on the orders of the kidnappers, at Vassileos Constantinou Street in the northeastern suburb of Aghioi Anargyroi, some 5 kilometers from his Peristeri home. He found the 50-year-old, collapsed on the ground.

The spot where 'Master' was dumped.

“I spoke to my brother but he didn’t answer. It was like he was dead. He wasn’t moving at all,” the 47-year-old told police. “Some of his teeth were broken and he had bruises and cuts on his left eye, his head, his back and many other parts of his body, where he had signs that he had been beaten. The clothes and shoes he was wearing were not his own. The whole time I shook my brother and talked to him but he didn’t respond.” He claims that a few hours before being directed to the location, he had paid a ransom of 8,000 euros.

A.H. was initially taken to Attiko Hospital and then transferred to the Thriasio Hospital, but his health did not improve. He didn’t respond to any of his brother's attempts to communicate. Almost a month later, he died. According to the case files, he had suffered internal bleeding and brain swelling due to blunt force trauma, and had also had a heart attack. The coroner who performed the postmortem found that A.H. had heart and lung problems prior to his abduction, ruling that the trauma likely triggered his death.

After Master died, his brother told police that A.H. and a number of his associates were in the business of smuggling migrants from Greece to Italy for a fee ranging between 1,500 and 3,000 euros per person. Investigators found evidence to suggest that the migrants would gather at an apartment in Kallithea, southern Athens, and would then be taken to a boat to make the trip to Italy.

Master’s brother said that the gang was headed by a Syrian, possibly a Kurd. According to the case file, the Syrian drove a luxury car and had declared an income of over 1 million euros in revenues from an electronics store.

He was the only suspect that denied any involvement in the racket from the onset, attributing the claims of witnesses to envy. “They’re saying all that because they’re jealous of me,” he testified.

A.H.’s brother also told police that he recognized the voice of one of the kidnappers from the telephone conversations. That man was later identified as Z.I., a Pakistani national known as the “Priest” because of his long beard. “Z.I. owed the Syrian money from a shipment of children to Italy. Z.I. wouldn’t pay so he took my brother to get his money back,” the 47-year-old told police.

An arrest warrant has been issued for Z.I., who used to own a mobile telephony store and later a video club in Athens renting out Pakistani and Indian films before he disappeared off the authorities’ radar. According to the testimony of some of his compatriots, he left for Pakistan shortly after Master’s death, while they also said that he owed several thousand euros to his associates in the racket.

“He disappeared without a word, leaving unpaid building charges and bills,” said the owner of the video store the Priest rented for 300 euros a month. “I remember that he owed money, and at some point I said to him, ‘Look, I don’t want any trouble,’” the man, who spoke on the condition of anonymity, told Kathimerini.

A few days after Master’s death, another Pakistani man, identified as M.X., told police that he had also been kidnapped by the same people. He said he had been grabbed by four men who claimed they were owed money by Z.I. “They put me in a car. I was blindfolded. We drove for 40 minutes. Along the way, they told me that if I tried anything, they had a bullet for me,” M.X. told police.

According to the case file, he was taken to a small room and had his hands tied with plastic straps. “They put a white cloth over my head, down to my neck. I couldn’t see anything. Then they started beating me,” he testified. “They told me that if the Priest didn’t pay the money he owed them, my family in Pakistan would pay. They kept me for five or six days. I could hear the television playing Greek and Arabic programs from the room where I was being kept. For food they’d give half an Arabic pita a day.”

M.X. does not know if anyone paid his ransom, but he claims that one night his abductors released him on Athinon Avenue.

During the preliminary investigation, witness testimonies also pointed to Master’s brother as being a part of the migrant smuggling racket. All of the accused, in their testimony to an investigating magistrate at the Athens Court of First Instance, revised their initial testimonies and revoked statements that incriminated themselves and their fellow suspects.

“This shift in stance shows that their testimonies to the investigating magistrate do not correspond to reality, as they were the product of calculated thought, possibly following the advice of counsel,” the Council of the Athens Misdemeanors Court, which indicted them, ruled. According to the ruling, the suspects had, since at least 2010, formed and participated in a structured and constantly active group that was involved in the extensive smuggling of migrants.

According to the case file, the gang used a boat that it had brought from the southern Peloponnesian port town of Kalamata to Flisvos Marina in southern Athens for the transportation of migrants to Italy. Today, two years after Master's kidnapping and death, the Sortsiam remains half-submerged in the mouth of the Ilissos River in the Bay of Faliro.

On the other side of the city, Master’s home has remained sealed since his death.

The handful of neighbors who know about the kidnapping prefer not to talk about it. “I knew him. He had health problems. I heard he died of a heart attack,” one man, a Pakistani national, told Kathimerini.

On December 23, in their testimonies to the three-judge Felonies Appeals Court, all of the suspects in the case rescinded their previous testimonies and attributed Master's kidnapping and death to the suspects that are believed to have fled to Pakistan and are being sought by the Greek police.

“In all the years I have been in Greece, I have never committed a crime. My brother was involved but I had nothing to do with all that,” I.M. told the court, denying any involvement in migrant smuggling or knowledge of the Syrian suspect fingered by witnesses as being the head of the racket.

Meanwhile, the Syrian told the court: “I come from a very wealthy family in Syria. I had no need to do any of this,” arguing that the other suspects had pointed to him because they envied him. “I have enemies in the market,” he said.

Prosecutor Dimitris Pierros, however, presented evidence showing that the Syrian had received 17 calls on his cell phone from one of the men accused of kidnapping Master during the time he was missing. “That’s a lot of calls in 24 hours. Can’t you remember who you spoke to?” the prosecutor asked him.

“That’s all well and good, but if I had anything to do with the kidnapping I wouldn’t be speaking over my cell phone. Anyone who does this kind of thing knows to be careful,” the suspect responded.

The court acquitted the three Greeks and sentenced the Syrian and the Indian to 23 years in prison for involvement in a criminal organization. Master’s brother was handed five years.

“Fifteen days after we sent the body to Pakistan, our father died of grief,” I.M. told the court.

An island between tragedy and hope on the refugee trail

The treasures of the Tatoi Estate

The hours before a deportation