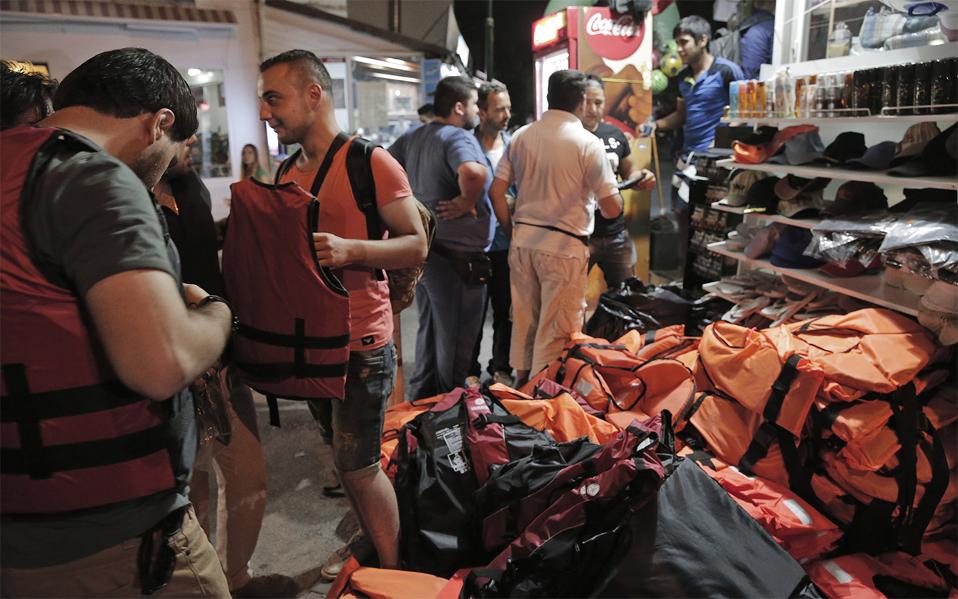 You could hear the shipwrecked passengers' cries from the beach. It was early in the morning of November 17, but still dark, when patrol boat PV 281 of the Finnish coast guard found the fiberglass immigrant boat capsized off Psalidi beach on the island of Kos in the southeastern Aegean. Survivors were clinging to the floating wreckage.

Rough weather prevented the rescue boat from approaching the sinking vessel. It meant that somebody would have to swim to offer assistance.

“I took a life jacket from a man we had already rescued. But the plastic clips which are normally used to secure it in place were missing,” a Finnish coast guard officer told the prosecutor on Kos during the ensuing probe. “I tied some knots to secure it and jumped into the sea,” he said.

Of the 17 people aboard that boat, nine drowned. Four of the victims were children. The man at the helm of the boat was a car engineer from the Syrian port city of Tartus. His lack of navigation skills was not the only reason for the tragedy.

“Two boys said that their parents had drowned because the life jackets given to them by the captain were unsafe,” the Finnish coast guard officer said, according to the case file seen by Kathimerini. “Their hand gestures suggested that the clips opened and the life jackets came off,” he said.

This is not the first case of refugees found using substandard life jackets bought in one of the towns along the Turkish coast. Several testimonies from Greek coast guard officers, EU border agency Frontex guards on the eastern Aegean islands, volunteers, as well as evidence in the hands of the Turkish authorities, indicate a roaring trade in such “life” jackets. Clandestine workshops, mostly around the coastal town of Izmir, which used to manufacture shoes and bags are now making fake life jackets filled with non-buoyant materials. When soaked, the material does not float but becomes heavy and causes the wearer to sink.

In the wake of the deadly shipwrecks in the Aegean, Turkish authorities carried out extensive inspections at workshops and stores across the country. Following an inspection at Izmir in October, police confiscated more than 1,300 fake life jackets and detained 11 people. The windows of the illegal workshop had been covered with newspapers to disguise the operation. A similar workshop was discovered in early January. Police detained four workers, two of whom were found to be Syrian refugees. During inspections last week in Istanbul, Mersin and Canakkale, police confiscated at least 2,500 unsafe vests.

“Over the past 10 years, we have been monitoring the market and conducting checks. These have intensified over the past couple of years mainly because of the Syrian refugees. Before the refugee crisis, there were just a few jacket-making operations across the country; now there are dozens of them,” said a representative of Turkey's Ministry of Labor and Social Security, which is responsible for the checks.

During one of the most extensive searches, on January 18, 27 ministry inspectors escorted by police and tax officials seized 1,369 life jackets and destroyed 652 of them.

“We can neither confirm nor deny that the production of counterfeit vests is the work of an organized racket,” the official said. “During one of our searches we found vests that had already been used; they were still wet,” he said.

Fake life jackets are sold for up to 10 euros while genuine vests cost around 30 euros. According to international regulations, life vests must be of a highly visible color and fitted with a whistle firmly secured by a lanyard.

“However, refugees are often sold life jackets of a less visible color that are designed for water sports. If you become unconscious, these will not keep your face above water,” said the captain of a coast guard vessel in Lesvos speaking on condition of anonymity.

“They are stuffed with padded foam and are usually knockoffs of a famous brand. You will also see arm bands being sold for kids although these are completely unsuitable for use on the open sea,” said Will Stephens, a volunteer rescuer with Royal National Lifeboat Institution, a British nongovernment organization, on Lesvos.

The materials inside fake life vests could drown refugees. (Photograph by Will Stephens).

During an investigation into human trafficking rings at Izmir in June, Kathimerini saw salespeople, including a hairdresser, openly touting their wares along Fevzipasa Avenue and smaller streets.

A shop selling men's clothes in Izmir divided its window in two, selling suits on one side and life jackets and water rings on the other. The Labor Ministry inspectors have found numerous people selling vests without a proper license, including real estate agents, taxi drivers, gas station owners, grocers and mobile phone store managers.

One of the biggest life jacket-making factories has been in operation in the town since 1996. Kathimerini tried to contact life vest producer Sait Guderoglu but he said he was on a business trip to Denmark. His aides referred us to a recent interview with Turkey's Hurriyet in which he slammed the country's illegal jacket-making operations.

“[The fake] life jackets are made of backpack material and filled with sponge, and because sponge is hydrophilic [water-absorbing], it drags people down and causes them to drown,” Guderoglu told Hurriyet, adding that wearing the fake life vests may be more dangerous than wearing no jacket at all.

'The captain had kicked my son into the sea'

Before sinking off Psalidi beach, the passengers of the fatal vessel were promised a safe passage. They expected to board a luxury yacht until they were guided to a white, 6-meter vessel on the beach. Most of them had first arrived at Izmir before traveling to Bodrum, where they would sail from. They spent the night at the Costa and Kaptan hotels and booked their places on the boat for 1,500 euros each. When it was time to get on board, not everyone had time to put on a life vest, fake or real.

One of the survivors, 56-year-old Yousef H., said that shortly before departure somebody stole the vests that he had bought for himself and his family.

“We called the smuggler and they were returned to us,” he said. But traffickers told them not to wear them while they were still on the beach. They were afraid that the police would arrive. “But once on the boat, we were so crammed that we could not move, let alone put on our vests. We were sitting one on top of the other,” Yousef said.

A document from the case file.

According to the case file, Yousef was the first passenger to be pulled out of the water by the Frontex men. He was wearing a vest that he found amid the chaos. But its belt was broken. “There were some big plastic bags by our feet and my daughter began to look for a vest. She pulled one out and gave it to me. I passed it around my shoulder. My daughter also grabbed one, but did not have time to put it on. The vest filled up with water, rose up to my neck and pushed me on my back. It was then that I saw the boat had capsized,” he testified.

For 30 minutes, Yousef could hear children and women screaming. “Then I could hear nothing. I could only see the sky and everything around me was dark,” he said. His wife, his 22-year-old daughter and his two sons all died in the shipwreck. “Another passenger,” Yousef told the Kos prosecutor, “told me that the captain had kicked my son into the sea.”

An island between tragedy and hope on the refugee trail

An Aegean journey of despair

The curious kidnap and demise of the man called ‘Master’