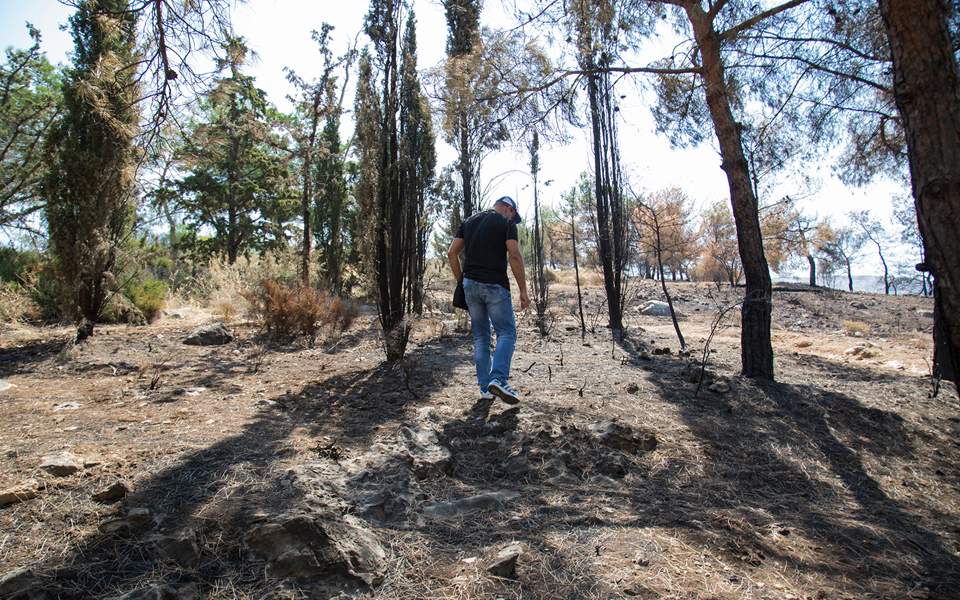 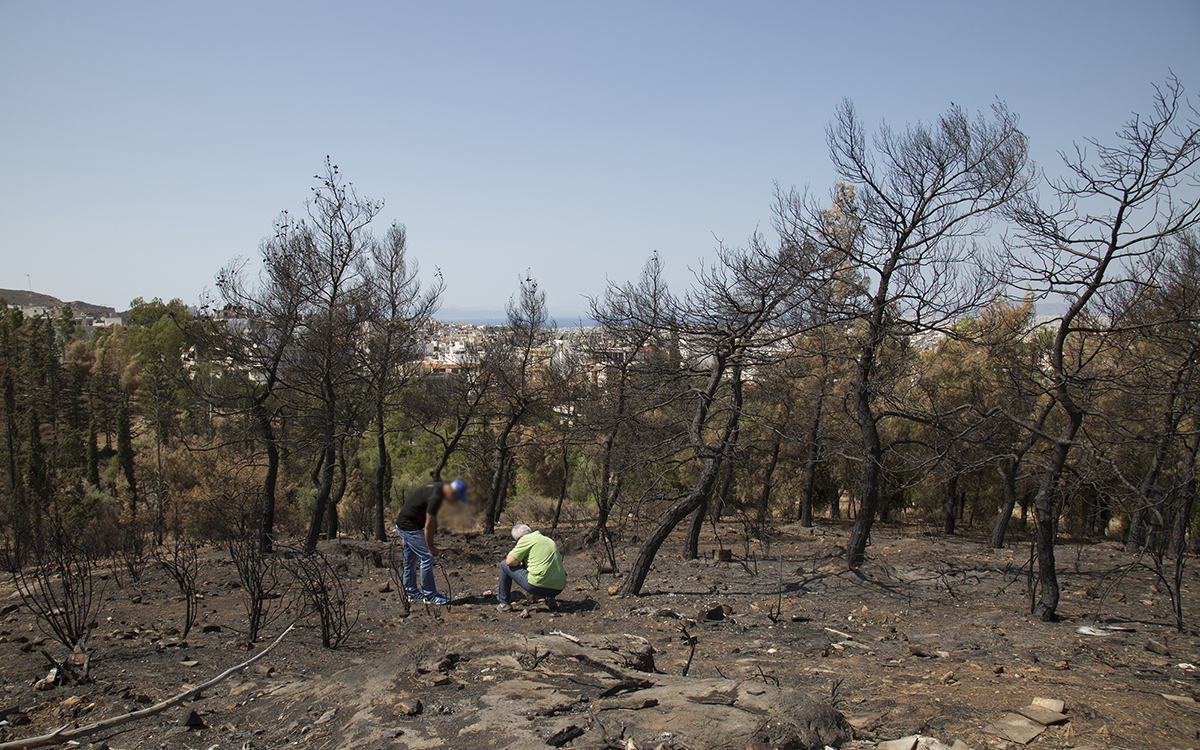 Like animal trackers, they crouch close to the ground, reading signs that are invisible to the untrained eye. The depth of the char on the trunk of a tree, cracks in a rock that has been exposed to high temperatures, and even the soot that has settled on stones and wires can provide valuable evidence. “The fire speaks to us,” says one of the investigators, opening his arms in the shape of a V to illustrate the pattern of the flames.

We are in the woods above the firing range at Kaisariani, eastern Athens, with two officers from the Hellenic Fire Service’s arson department (DAEE). A fire had broken out here on August 10 that nearly spread to nearby apartment buildings but was contained by four water-dropping helicopters and 58 firefighters before it could cause greater damage.

On that day, a team of investigators from DAEE arrived at the scene of the blaze just a quarter of an hour after it started. Their mission was to locate the original source and to look for possible culprits if they determined that it was an act of arson.

Two weeks later, they have brought us to the location and are showing us how they look for arson indicators.

Not far from the scorched part of the woods, we come across a group of beehives. The officers explain that fires are occasionally started by careless beekeepers while smoking the hives to calm the bees. However, after carefully studying the area on August 10, the DAEE team found no evidence that apiarists were to blame in this case.

The investigators are seeking the clues that will help them piece together the puzzle of events that resulted in the blaze. They look at pieces of scorched bark from different sides of a tree. The bark is more deeply charred on one side, indicating that this is the direction the fire came from. They tell us to look up and observe how the direction that burnt pine needles and tree leaves are turned reveals which way the wind was blowing when the fire came through this spot.

Some of the indicators on the scene of a fire. (Photos: Alexia Tsagkari)

Many of the indicators experienced investigators look for can be spotted long after the event itself. For example, this year, students at the Fire Service Academy were trained in investigation techniques at a location that had been burnt a year earlier in Dervenochoria in Viotia, northwest of Athens.

DAEE has 14 officers who are based in Attica, but they are often called away to probe fires around the country. The team includes officers specialized in forestry sciences and electrical engineers whose task it is to determine whether a fire was caused by an electrical malfunction, such as a short circuit. These are the only members of the fire service who are allowed to be armed. They undergo rigorous target training every year, but say they have never had to use their weapons. They also receive regular training from American arson investigators, as well as the Greek Police. DAEE has 13 teams in as many of the country’s regions, while its management supervises 108 investigation offices at fire precincts around Greece too.

The agency is responsible for investigating urban as well as forest fires, and its officers often arrive at the scene before the blaze has been put out. “Our job begins with the first phone call that’s made to the fire service, because we also examine the calls,” says an experienced officer who spoke to Kathimerini on condition of anonymity. “In 2006, we discovered that the third phone call reporting a fire at Oinoe, north of Athens, had in fact been made by the man who accidentally started it.”

According to statistics compiled by DAEE, in the 2010-15 period, 1,850 fires were caused by negligence and 418 were intentional. In that same period, 832 people were arrested and 15 were detained in pretrial custody. Farmers represent 26 percent of fire starters, while 23 percent are pensioners. In 2015, 53 percent of the forest fires in Greece were found to be the result of arson.

One of the most popular devices used by arsonists is the mosquito coil, which gives the perpetrator time to get away. It also leaves a very recognizable spiral of ash. In one of the most publicized cases DAEE has ever investigated, a woman who was found guilty of starting 40 fires within three months in the Attica region used small fireworks loaded with phosphorus.

Before zeroing in on the point of a fire’s origin, DAEE investigators first secure the scene and then scan the ground with magnets to collect any metallic evidence. Any mechanisms found with fingerprints and DNA evidence are sent to the Greek Police forensics department. The team also works with the State Chemical Laboratory when needed.

The transfer of burning matter by the wind – even as far as 500 meters away from the point of origin – can make the investigators’ job very difficult. Our guides tell us about a recent case, concerning the fires at Kalamos, north of Athens, in mid-August. The fire service had received dozens of calls from citizens who spoke of multiple fronts and a few who claimed to have evidence of arson. Investigators subsequently discovered that these smaller fires were the result of transfer, as burning matter carried by the wind had ignited paper and other flammable materials in the woods.

In another case our guides recount, a pensioner came forward falsely claiming that he had started a fire on purpose simply because he wanted to be on television. “I started the fire. When are you going to take me away?” he asked the unconvinced and bemused firemen on the scene.

The investigators are very careful at the scene. (Photo: Alexia Tsagkari)

“The process of collecting and documenting evidence has to be done very painstakingly so we can determine exactly what happened in each case,” says one of the DAEE officers, adding that testimony from witnesses, even from the first firefighters to arrive at the scene of a blaze, can prove invaluable.

Back in Kaisariani, the officers show us how the signs led them to the fire’s point of origin. They explain that it started at the base of a pine tree and the flames spread across the ground before gaining altitude. It was sparked, they say, by an open flame, most likely a cigarette lighter. A suspect taken into custody just after the blaze was later released due to lack of evidence, but another suspect is currently being investigated.

Sons succeed fathers in the cockpits of country’s Canadairs

Risking life and limb for a way out of Greece

The travails of two Turks who worked at Gulen schools

Alone on a flaming ship