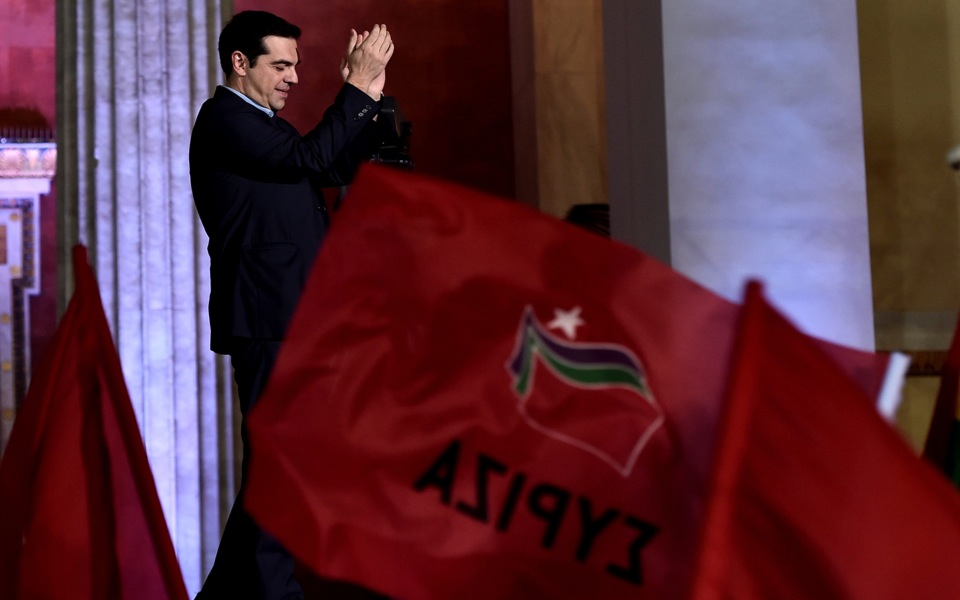 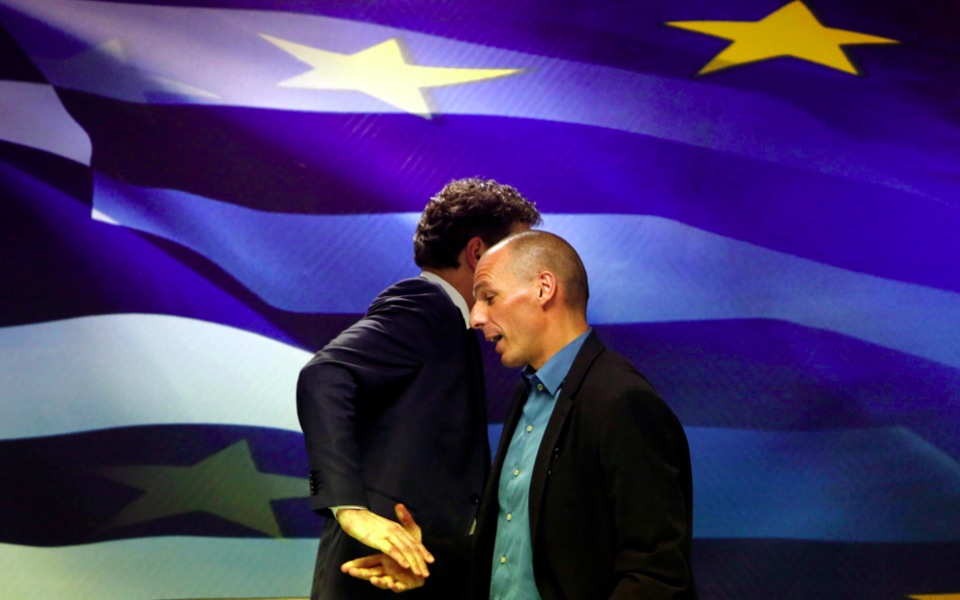 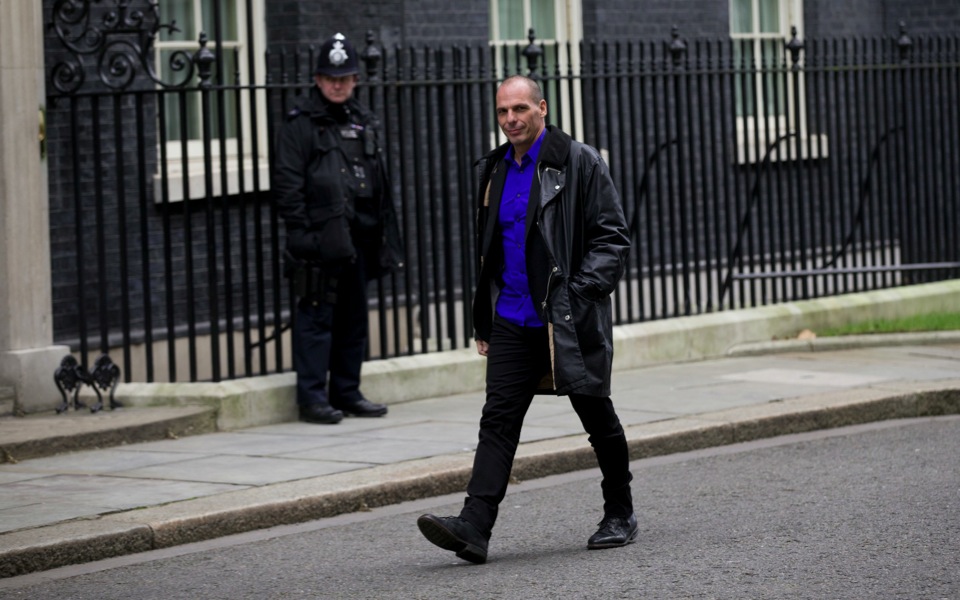 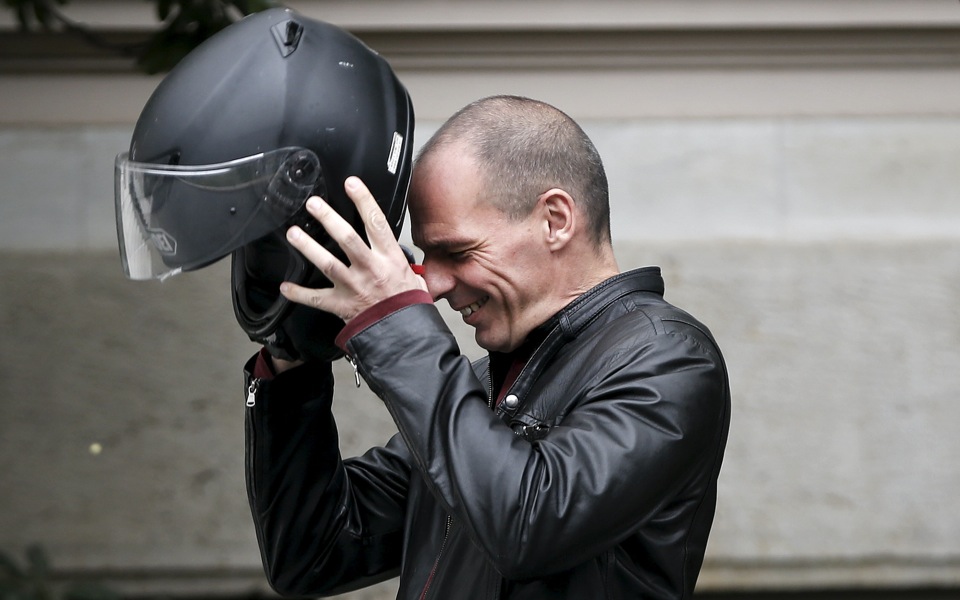 Finance Minister Varoufakis wears his helmet before leaving the Maximos Mansion on his motorbike after a meeting with Prime Minister Alexis Tsipras in Athens, March 27. [Alkis Konstantinidis/Reuters] 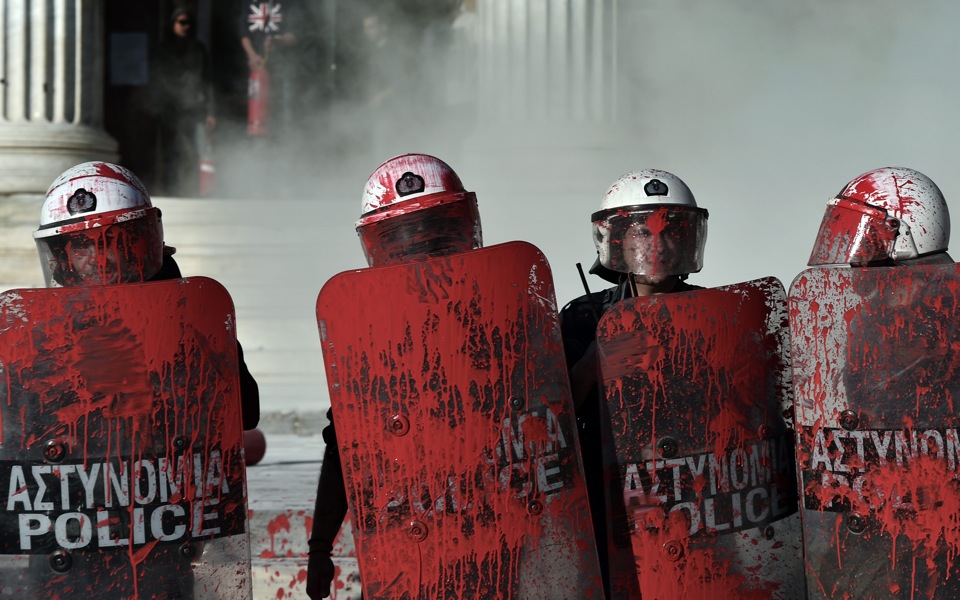 Riot policemen stand splattered with red paint thrown by protesters outside Athens University on April 16. The protesters demanded the release of families of political prisoners and changes to the anti-terrorist law. The tension arose at the end of the demonstration of opponents to a gold mine project in the Halkidiki peninsula, northern Greece, in Skouries. [Aris Messinis/AFP] 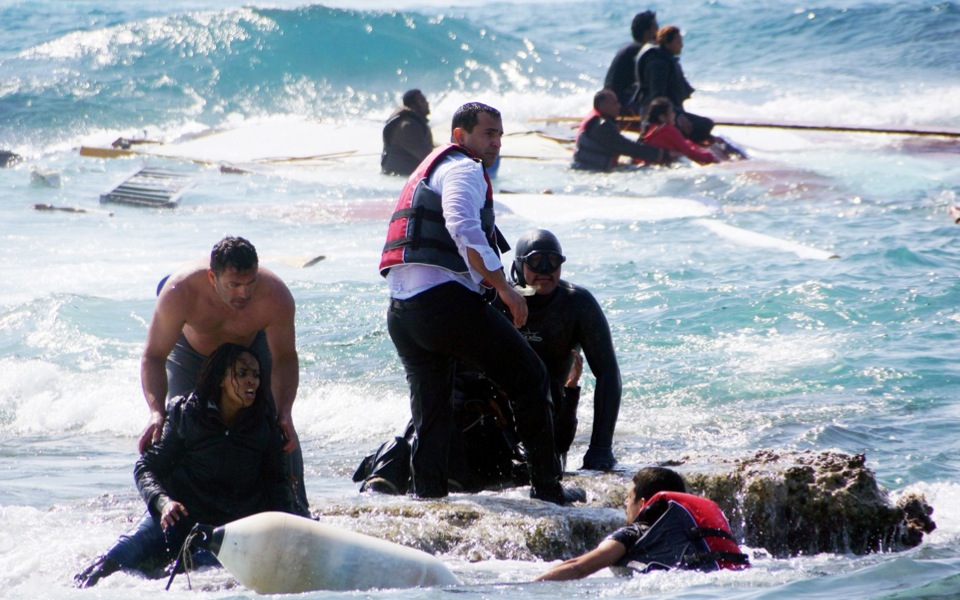 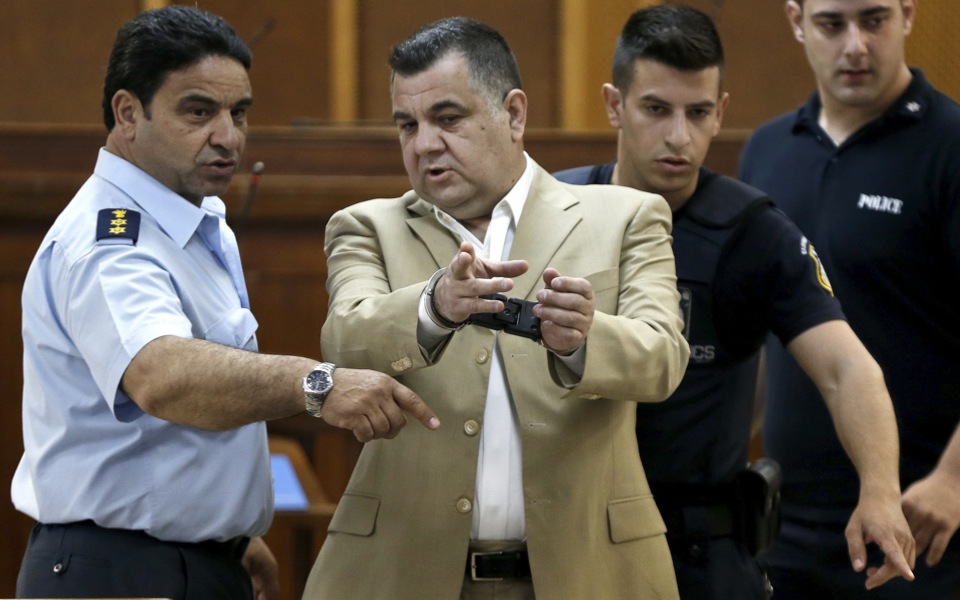 Giorgos Roupakias (c), who is in custody pending trial over the killing of anti-fascist rapper Pavlos Fyssas, is escorted by police officers at the court room where the trial of members and leaders of Greece's far-right Golden Dawn party takes place, in Koridallos prison, near Athens, May 7. [Alkis Konstantinidis/Reuters] 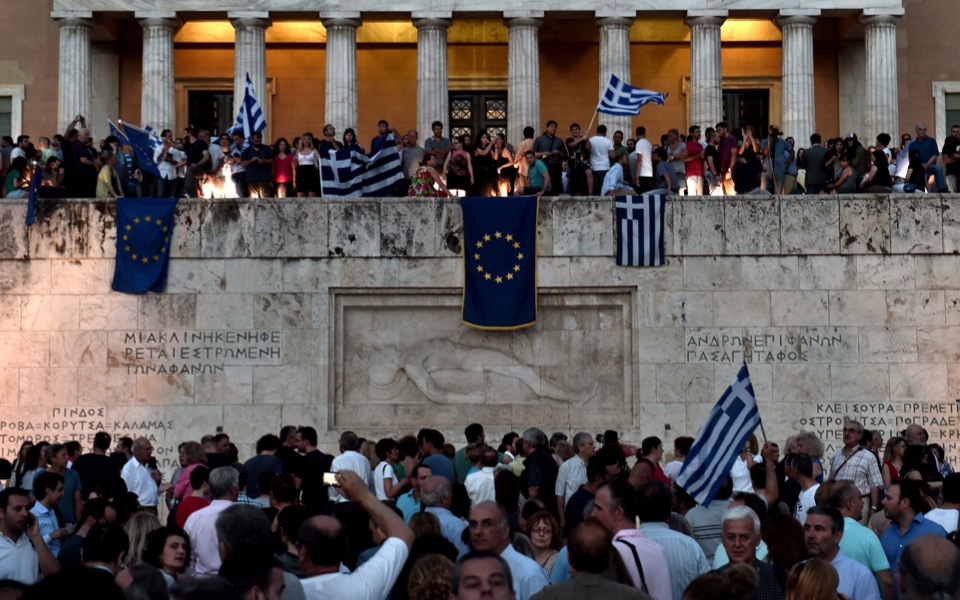 Protesters wave EU and a Greek flags during a pro-European demonstration in front of Parliament in Athens on June 18. [Aris Messinis/AFP] 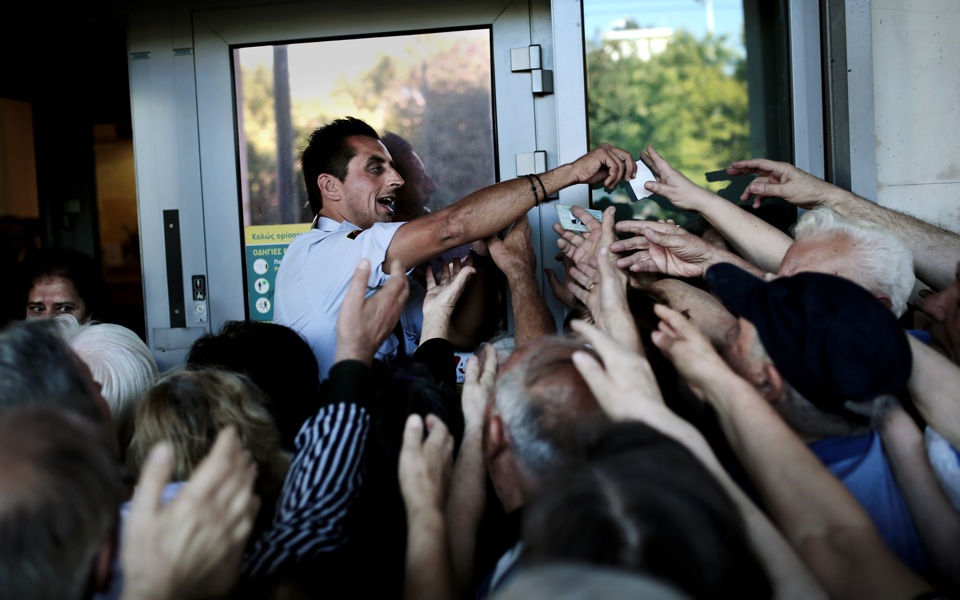 The manager of a national Bank branch delivers priority numbers to pensioners, as Greece reopened banks for pensioners who do not use cash cards for ATM, to allow them to withdraw their pension with a limit of 120 euros, in Athens on July 1. [Angelos Tzortzinis/AFP] 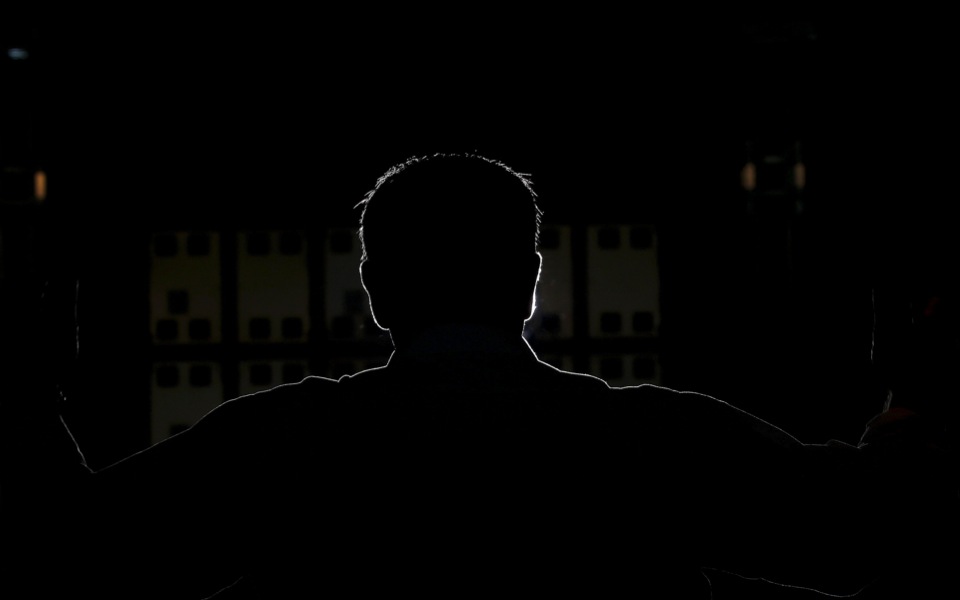 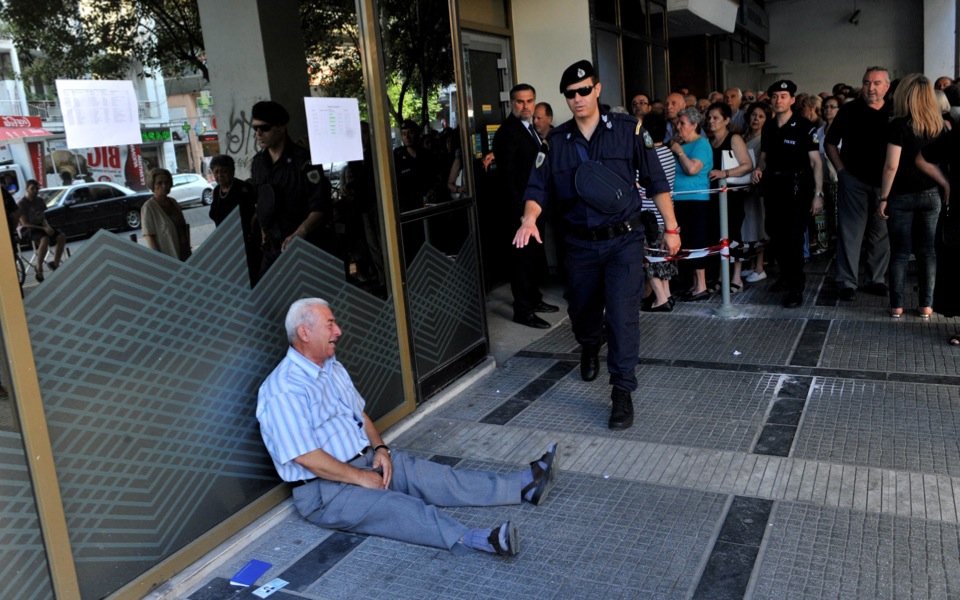 Giorgos Chatzifotiadis, an elderly man, cries outside a National Bank branch in Thessaloniki, in northern Greece, on July 3, as pensioners queue to draw their pensions, up to a limit of 120 euros. [Sakis Mitrolidis/AFP] 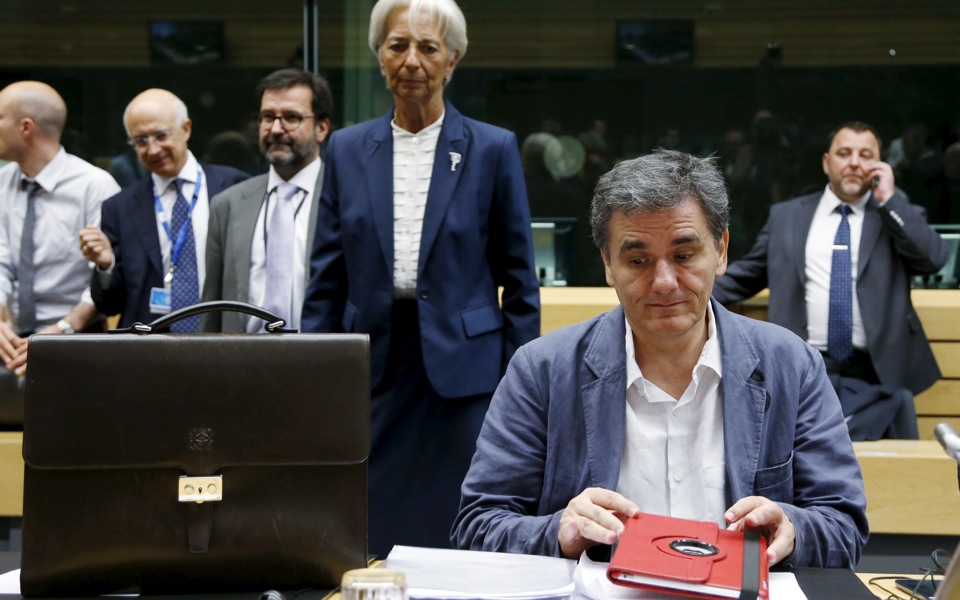 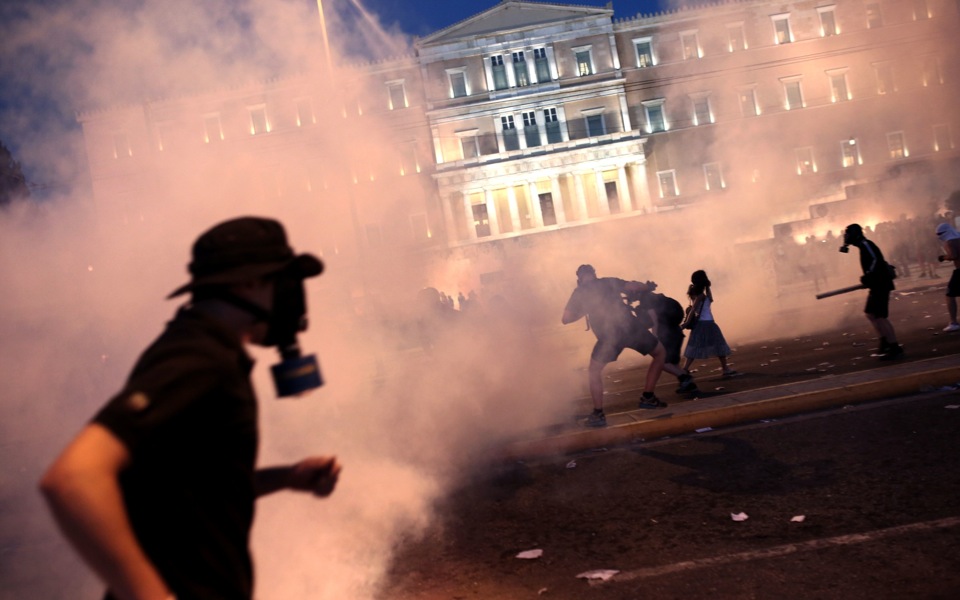 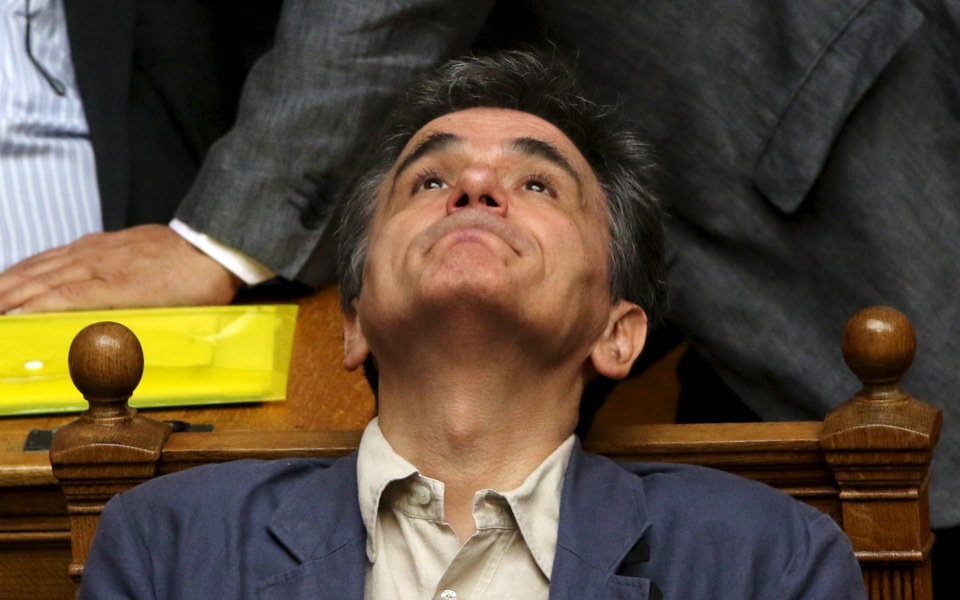 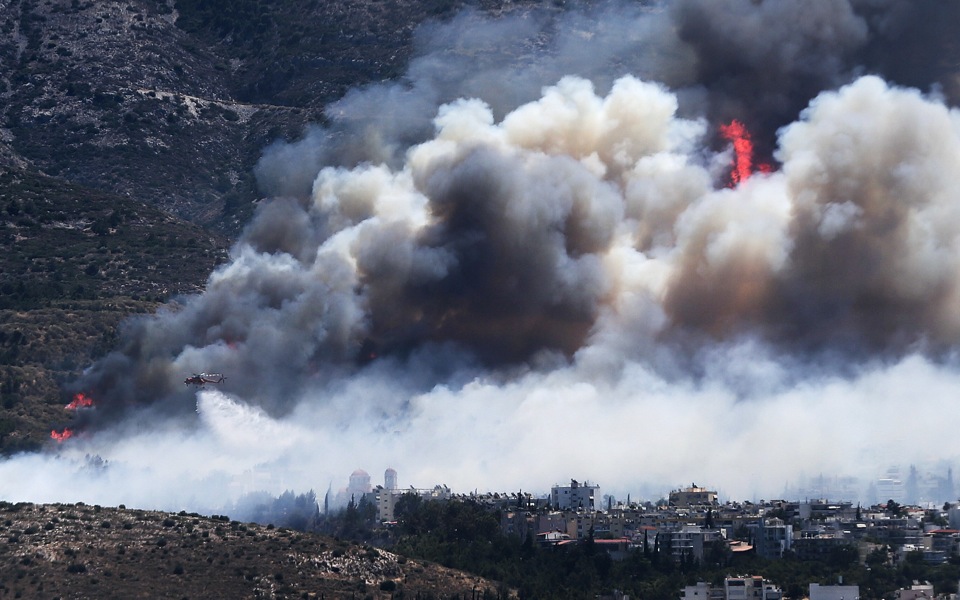 A firefighting helicopter drops water on a raging wildfire at the Kareas suburb, east of Athens, July 17. Dozens of Athens residents fled their homes as wildfires fanned by strong winds and high temperatures burned through woodland around the Greek capital, sending clouds of smoke billowing over the city. [Alkis Konstantinidis/Reuters] 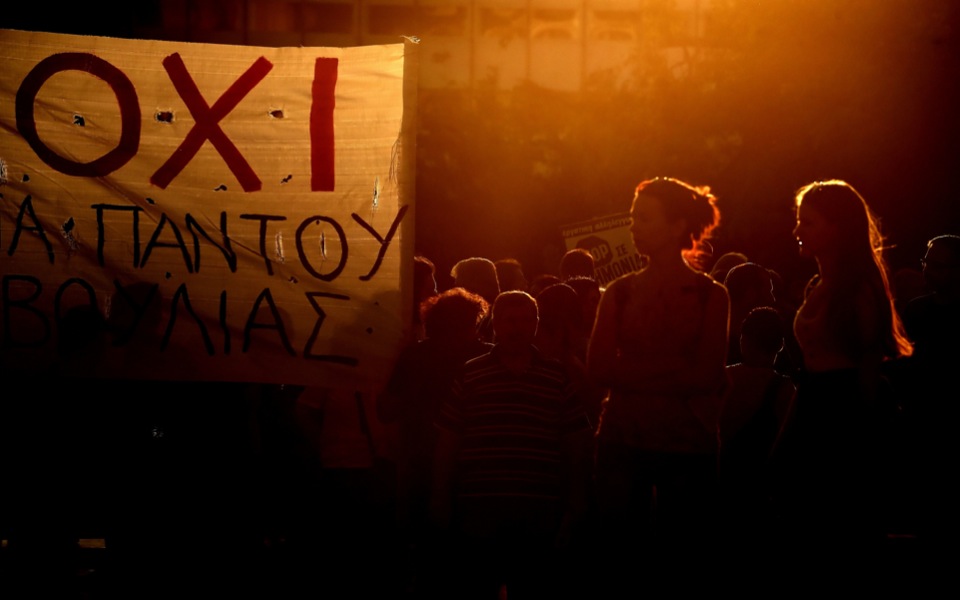 Protesters stand next to a banner reading 'NO' during a demonstration outside Parliament in Athens on July 22. [Aris Messinis/AFP] 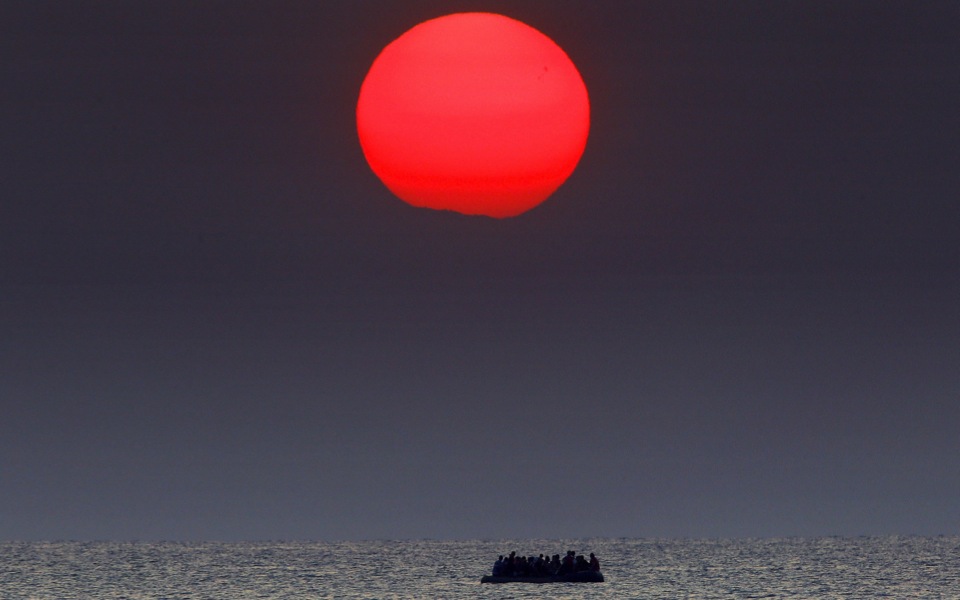 A dinghy overcrowded with Syrian refugees drifts in the Aegean sea between Turkey and Greece after its motor broke down off the Greek island of Kos, August 11. [Yannis Behrakis/Reuters] 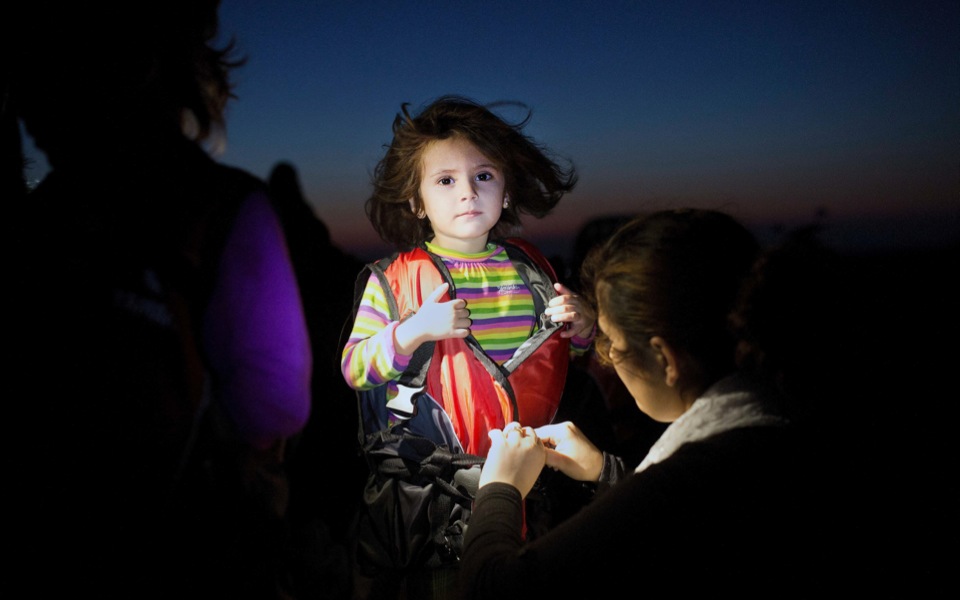 A child gets assistance to remove her life jacket upon her arrival on an inflatable boat carrying migrants on the Greek island of Kos after crossing a part of the Aegean Sea between Turkey and Greece on August 13. [Angelos Tzortzinis/AFP] 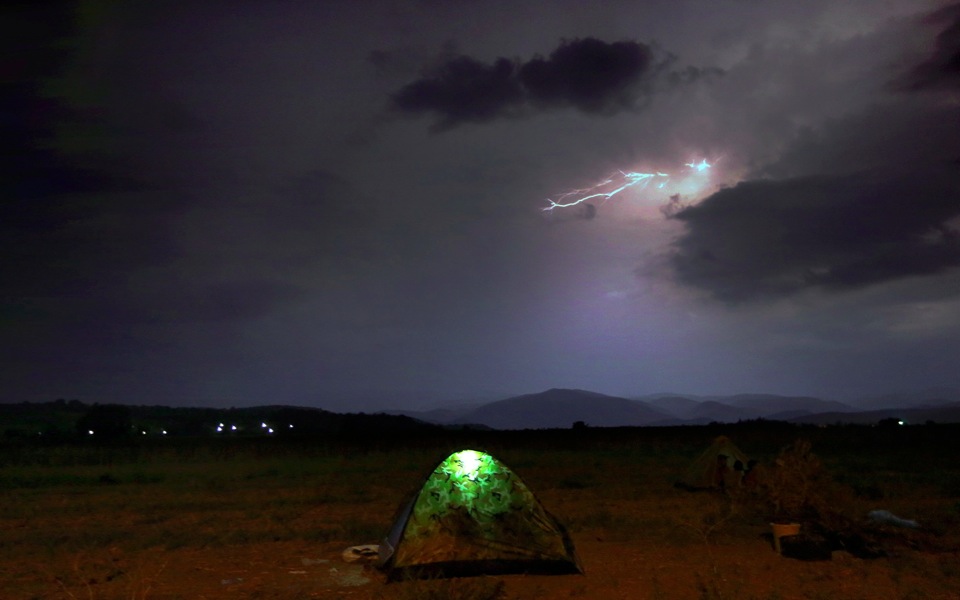 Refugees camp on a field as lightning strikes during a storm at the Greek-FYROM border, near the village of Idomeni, August 21. [Yannis Behrakis/Reuters] 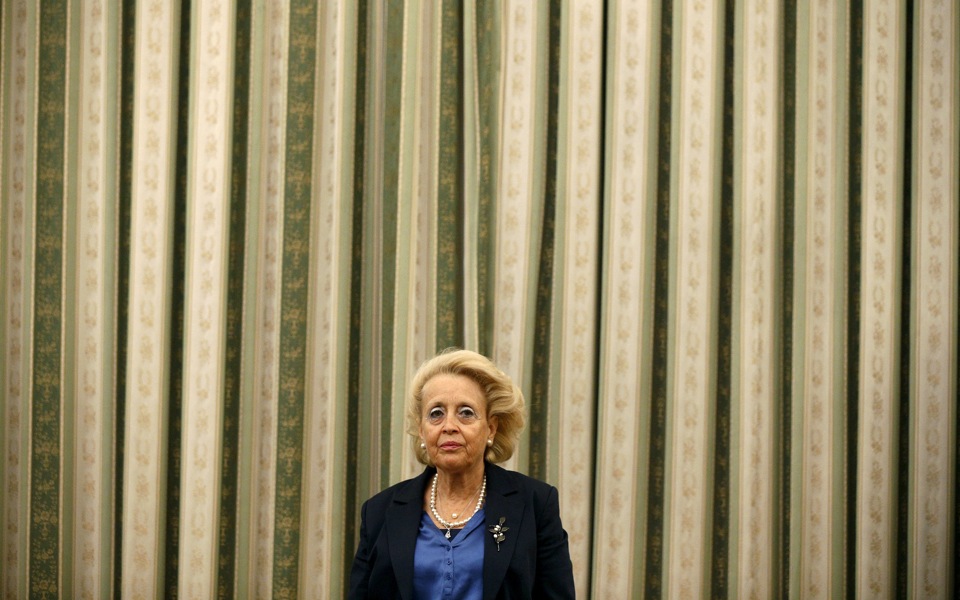 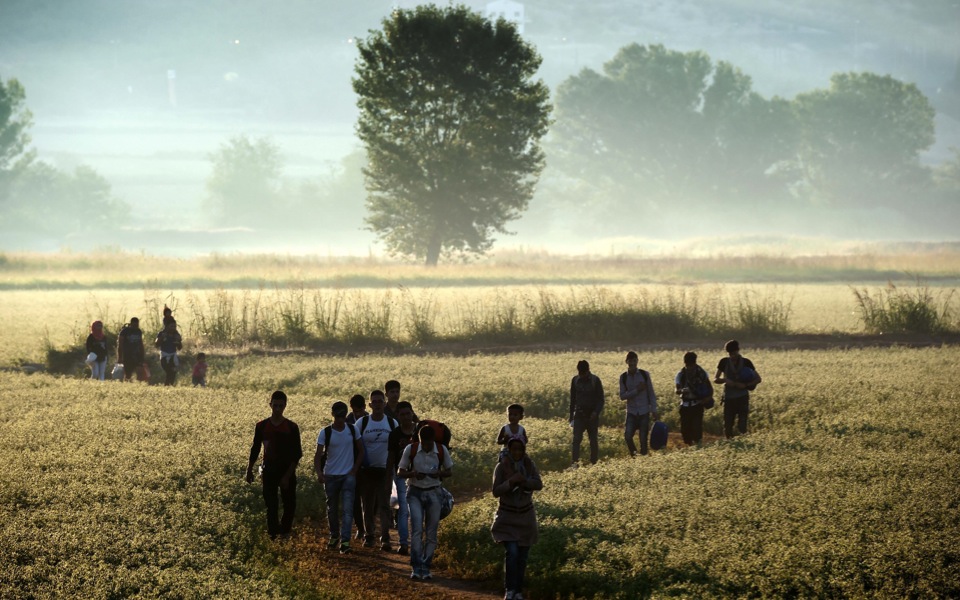 Migrants walk through a field to cross the border from Greece to FYROM near the Greek village of Idomeni on August 29. [Aris Messinis/AFP] 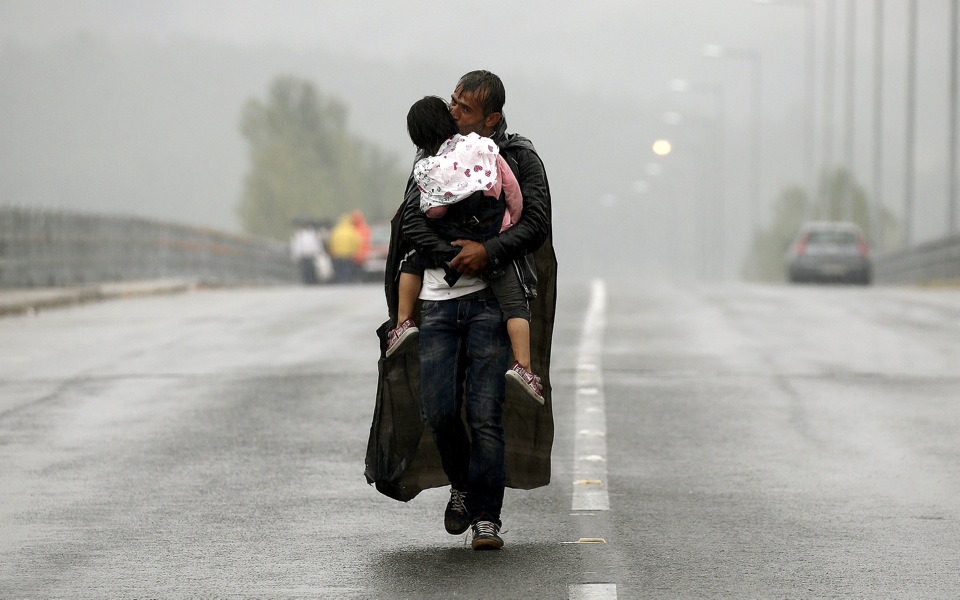 A Syrian refugee kisses his daughter as he walks through a rainstorm towards Greece's border with FYROM, near the Greek village of Idomeni, September 10. [Yannis Behrakis/Reuters] 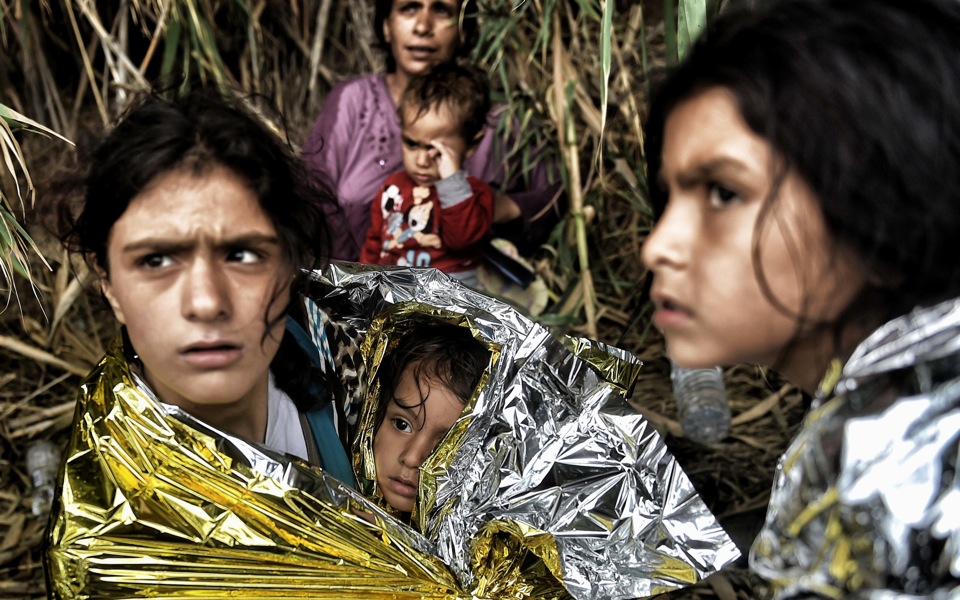 Syrian refugees are covered with life blankets upon arriving to Lesvos, after crossing the Aegean sea from Turkey, on September 28. [Aris Messinis/AFP] 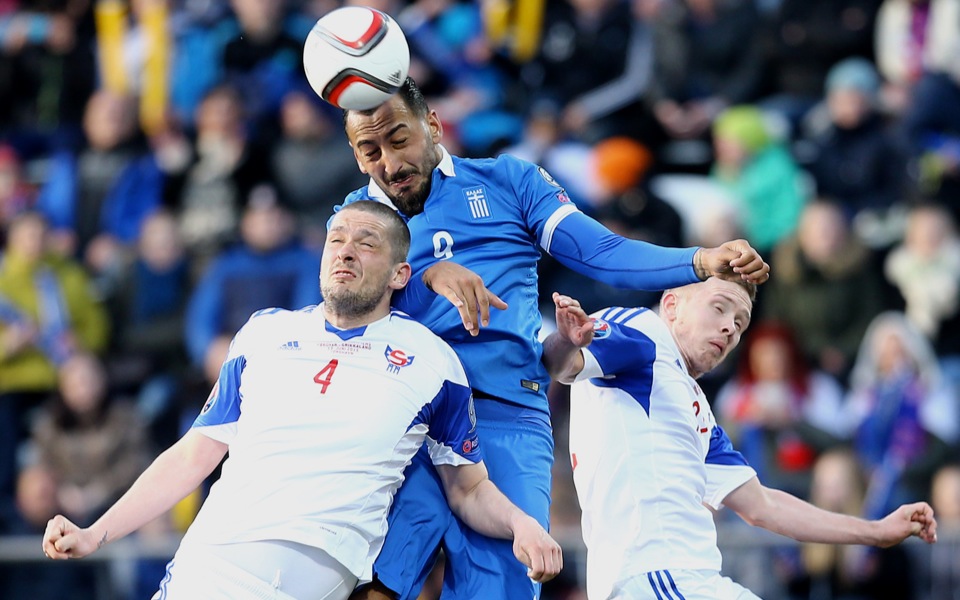 Greece's Kostas Mitroglou (behind) vies for the ball with Faroe Island's Atli Gregersen (front) during the UEFA Euro 2016 group F qualifying football match between Faroe Island and Greece, in Torshavn on June 13. The Faroe Islands completed a memorable double over Greece as they held on to record a 2-1 victory. [AFP] 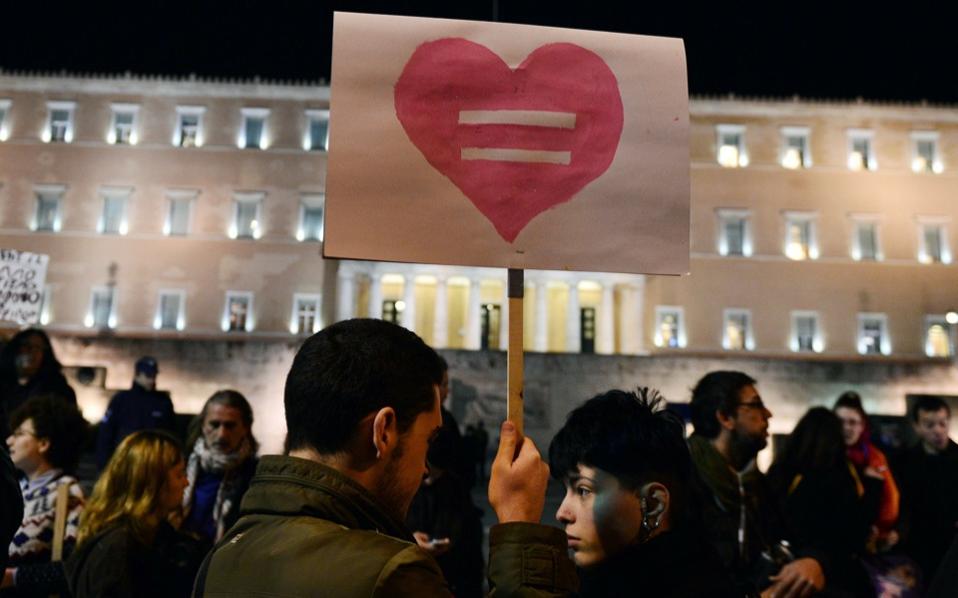 Human rights activists gather outside Parliament as Greek PMs vote on a human-rights' bill which allows civil partnership agreements between same-sex couples despite protests and opposition from political parties and the powerful Orthodox Church.
Newsroom
December 21, 2015 21.12.2015 • 12:47

Even by the standards of the action-packed crisis years, 2015 was a non-stop, helter-skelter experience for most Greeks. The year's key events included three national votes, one of which was a referendum that cast doubt on Greece's euro membership, SYRIZA's rise to power, frantic negotiations with the country's lenders, the ubiquitousness of Yanis Varoufakis, the closure of Greek banks, capital controls and the arrival of more than 800,000 refugees and migrants. Here are some of the images that will remain seared into the nation's memory.

UNICEF photo of the year

Daguerreotype of Acropolis auctioned in Paris

Miss Greece has eye on the universe

Refugees line up for food at Tae Kwon Do Stadium