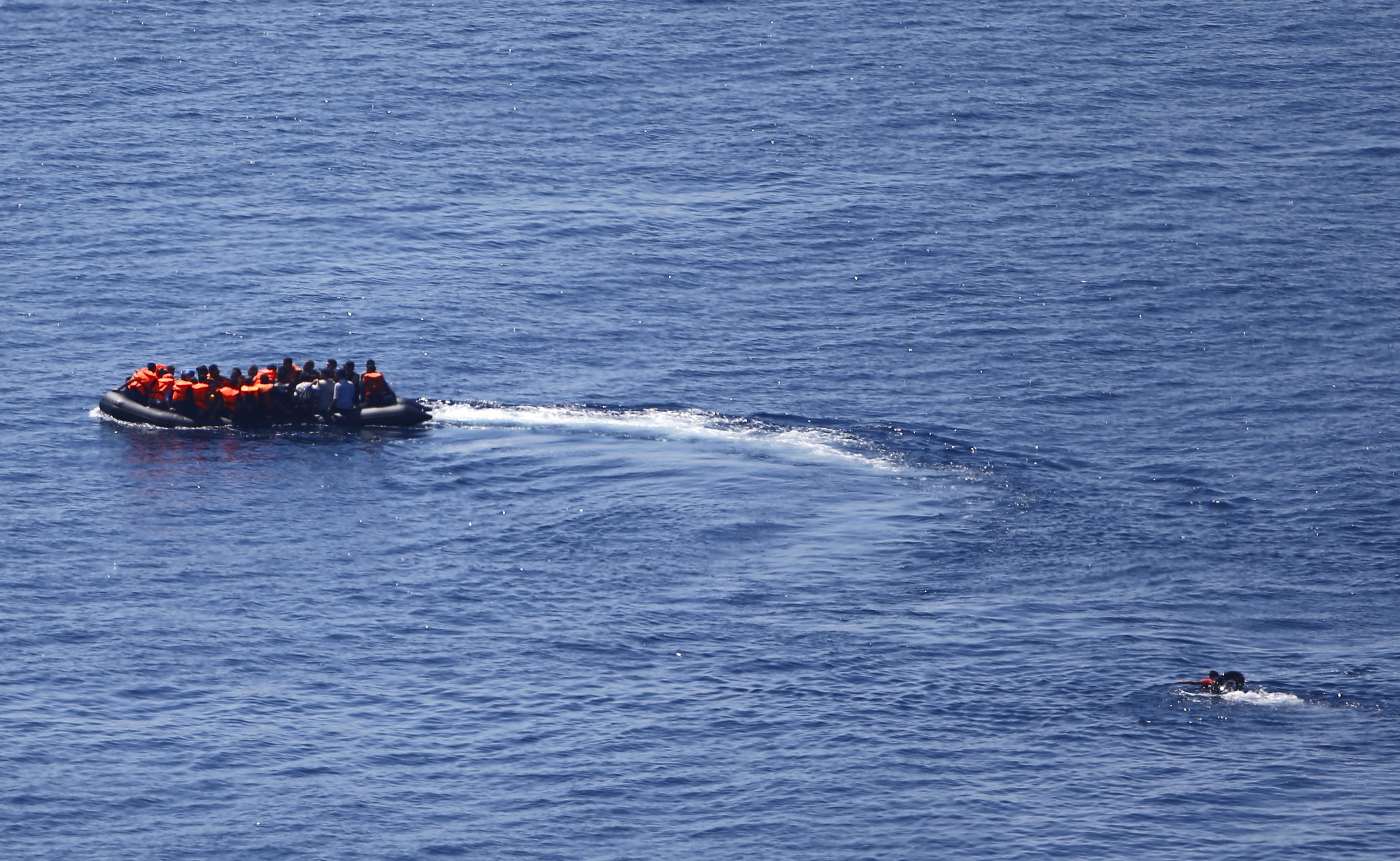 A man tries to swim towards a dinghy carrying migrants as it leaves for the Greek island of Lesvos from the southern Turkish coastal town of Behramkale in the Aegean sea between Turkey and Greece, on Thursday. 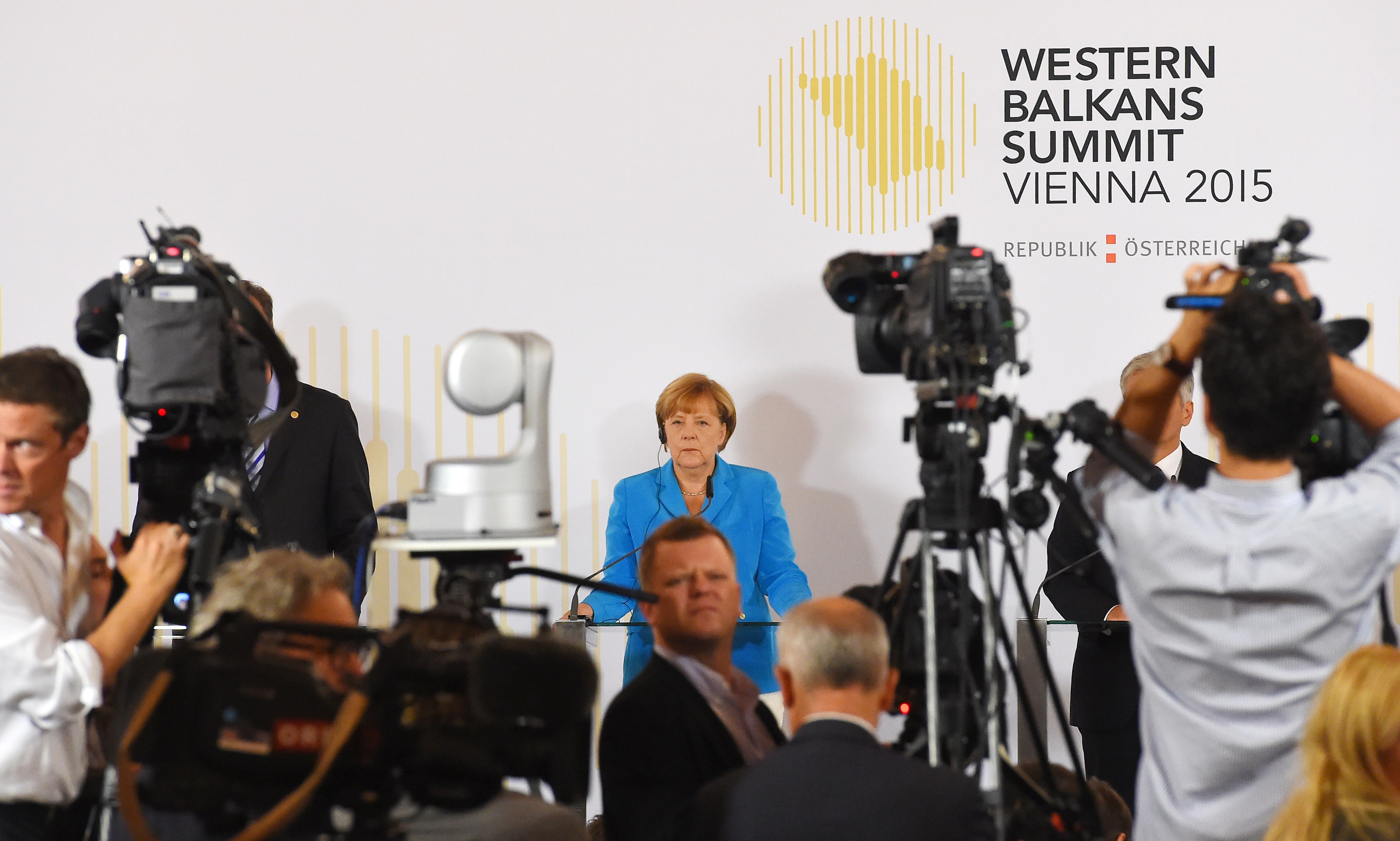 German chancellor Angela Merkel speak at a press conference during the Western Balkans Summit at the Hofburg palace in Vienna, Austria, on Thursday.
Newsroom
August 27, 2015 27.08.2015 • 19:18

Austrian Chancellor Werner Faymann had just finished telling other European leaders that there was an urgent need to crack down on human traffickers when the news came: at least 20 migrants – possibly up to 50 – have been found dead in a truck just miles away.

Faymann told those attending the Western Balkans Summit in Vienna on Thursday that the tragedy was a perfect example of the need for quick solutions to deal with the torrent of migrants pouring into Europe.

"Today refugees lost the lives they had tried to save by escaping, but lost them in the hand of traffickers," Faymann said.

Austrian police said the truck with the badly decomposing bodies was apparently abandoned Wednesday 25 miles (40 miles) southeast of Vienna on the main highway to Budapest with its back door left open.

German Chancellor Angela Merkel, who also attended the conference, said she was "shaken by the awful news."

"This reminds us that we in Europe need to tackle the problem quickly and find solutions in the spirit of solidarity," Merkel stressed.

The conference held a minute of silence Thursday to commemorate the trafficking victims.

Thousands of refugees from Syria, Iraq, Afghanistan or Eritrea are crossing Western Balkan nations from Greece every day with the help of traffickers, aiming to reach wealthy European Union countries like Germany, Austria or Sweden and apply for asylum.

"Never before in history have so many people fled their homes to escape war, violence and persecution," German Foreign Minister Frank-Walter Steinmeier said. "And given the large number of unresolved conflicts in our neighborhood, the stream of refugees seeking protection in Europe will not abate in the foreseeable future."

The Western Balkans conference was called to find a common European answer to the migrant influx that is overwhelming some countries while leaving others relatively unaffected. The leaders also talked about long-term perspectives for Balkan countries’ joining the 28-nation European Union.

Both Merkel and Steinmeier attended the meeting, reflecting the importance Berlin attaches to resolving the migrant crisis. Germany expects to receive as many as 800,000 migrants this year — the most in the EU.

EU members Greece and Italy, and non-EU Balkan countries such as Former Yugoslav Republic of Macedonia (FYROM) and Serbia – whose leaders attended the summit – are dealing with the initial refugee burden through sea and land routes. But many of these migrants are only in transit to western European countries.

At the summit, Austrian Foreign Minister Sebastian Kurz floated elements of a five-point plan that foresees establishing safe havens in the migrants’ home countries where those seeking asylum in the EU could be processed and – if they qualify – be given safe passage to Europe.

Beyond safe havens, possibly protected by troops acting under a U.N. mandate, the Austrian plan to be submitted to EU decision-makers foresees increased controls on Europes outer borders and coordinated action against human smuggling. It also calls for refugee quotas for each of the EUs 28 members — something that many countries have opposed.

"Were going to have a quota settlement approach, and in light of recent developments, I believe all 28 member states are now ready to accept and approve that," he told reporters.

He suggested the influx could get worse.

"There are 20 million refugees waiting at the doorstep of Europe," he said. "Ten to 12 million in Syria, 5 million Palestinians, 2 million Ukrainians and about 1 million in the southern Caucasus," he said.

Kurz said there was no choice but to find "a European solution to this crisis."

If not, he said, individual European countries would act on their own and "endanger our European idea of open borders."