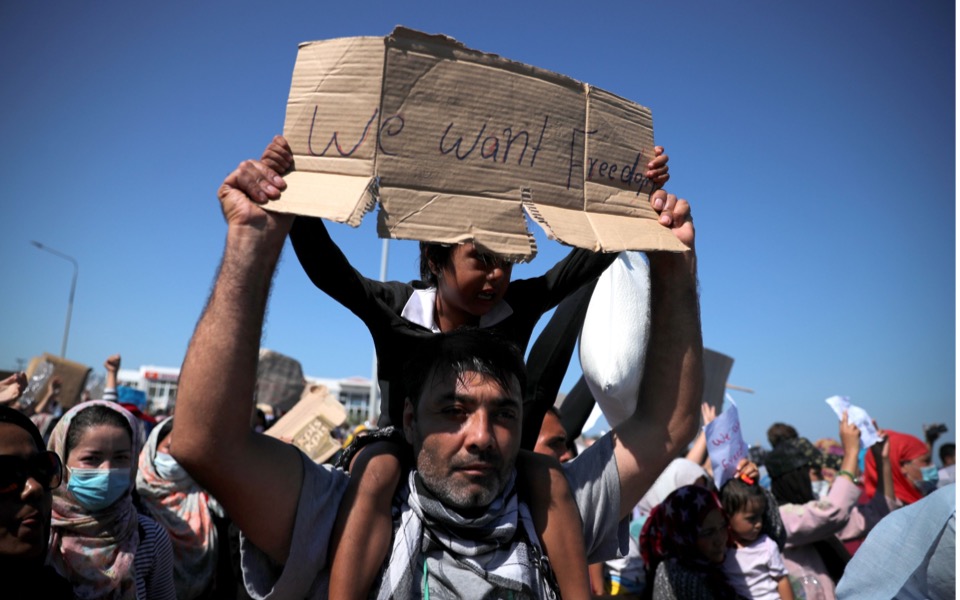 A man holds a child as refugees and migrants from the destroyed Moria camp protest after the news about the creation of a new temporary camp on the island of Lesbos, Greece September 11, 2020. [Alkis Konstantinidis/Reuters] 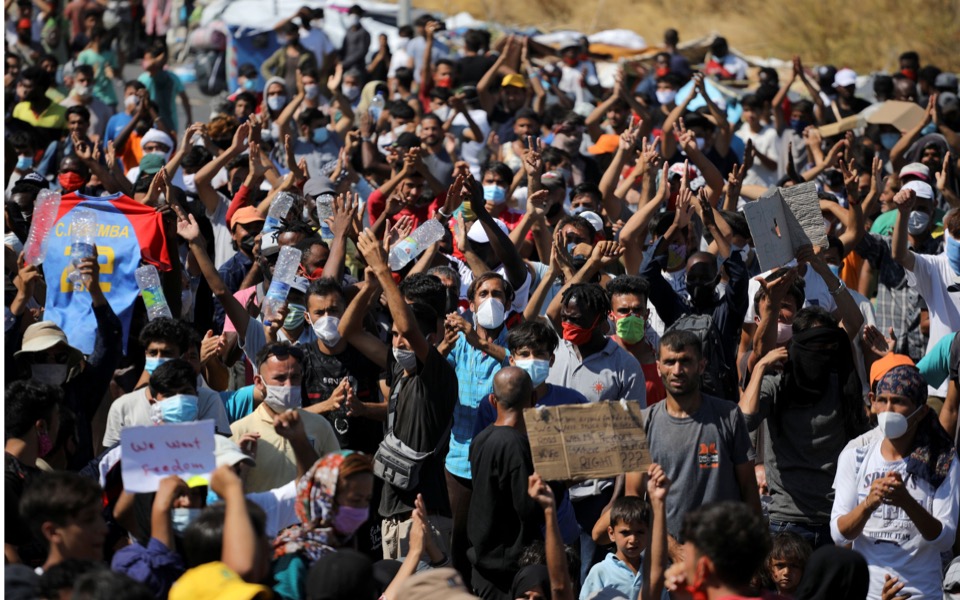 Refugees and migrants from the destroyed Moria camp protest after the news about the creation of a new temporary camp on the island of Lesbos, Greece September 11, 2020. [Alkis Konstantinidis/Reuters]
Newsroom
September 11, 2020 11.09.2020 • 15:45

Thousands of protesting refugees and migrants left homeless on the Greek island of Lesbos after fires destroyed the notoriously overcrowded Moria camp gathered on a road leading to the island's main town Friday, demanding to be allowed to leave.

Clapping and chanting songs, the protesters, most of whom appeared to be from African countries and from Afghanistan, were boisterous but peaceful. Some held up signs pleading for help from Germany, a favored destination for many migrants and refugees who arrive in Greece from the nearby Turkish coast.

More than 12,000 people who had been living in and around Moria were left homeless by two consecutive fires on Tuesday and Wednesday night. Greek officials said the blazes were deliberately set by some of the camp's residents angered by isolation orders issued to prevent the spread of the coronavirus after 35 residents were found to have been infected.

The camp had been under a lockdown due to last until mid-September after the first virus case was identified in a Somali man who had been granted asylum and left the camp but later returned to Moria from Athens.

"We have spent three days here without eating, without drinking. We are in conditions that are really, really not very good," Freddy Musamba, a former camp resident from Gambia who denounced the situation in Greece and the conditions under which he had been living.

"I want to speak about the European Union, who abandoned us, who left us here like this," Musamba said. He called for the EU "to come and support us, to not leave us. We are like abandoned children. We have endured things we didn't know could happen."

Of the camp's residents, Greek authorities have only allowed the 406 unaccompanied teenagers and children who had been living there to leave the island. They were flown to the Greek mainland on Wednesday night and have been temporarily housed in hotels. and other facilities.

Aid organizations have long warned about dire conditions in the camp, which has a capacity of just over 2,750 people but was housing more than 12,500 inside and in a spillover tent city that sprang up in an adjacent olive grove.

The situation has led to spiraling tension, both among migrants and refugees inside the camp and with local residents who have long called for Moria to be shut down.

Moria houses people from Africa, Asia and the Middle East who arrived on the island from the nearby Turkish coast fleeing poverty or conflict in their homeland. Under a 2016 deal between the European Union and Turkey, those arriving on Greek islands would remain there pending either their successful asylum application, or deportation back to Turkey.

But a backlog in asylum applications, combined with continued arrivals and few deportations, led to massive overcrowding in Moria and other camps on eastern Aegean islands.

The overcrowded camp and its dire conditions have been held up by critics as a symbol of failures in the EU's migration and refugee policy.

"Moria is a sharp reminder to all of us for what we need to change in Europe," European Commission Vice President Margaritis Schinas, who also handles migration for the 27-nation bloc, said.

"The clock has run out on how long Europe can live without a migration policy," said Schinas, who was in Greece to discuss the Moria fire with Greek officials. The EU's executive commission plans to present a new "pact for migration and asylum" on Sept. 30, he said.

According to Schinas, the pact will foresee agreements with migrants' countries of origin and transit to persuade people not to embark for Europe, as well a "robust" system to manage the EU's external borders, including "a new European border and coast guard, with many more staff, boats, instruments and tools."

It will also include "a system of permanent, effective solidarity in shouldering the responsibility of asylum" among EU countries, Schinas said.

On Thursday, French President Emanuel Macron announced that France and Germany were in talks to take in some of the children who had been living in Moria.

German Interior Minister Horst Seehofer said Friday that 10 EU countries had agreed to participate in taking in the unaccompanied children from Moria and that talks were ongoing with others.

He said Germany and France would take the largest share, "about two-thirds" of the 406 teenagers and children who had been living at the camp without parents or guardians.

German officials identified the other countries that would help take in the unaccompanied children as Finland, Luxembourg, Slovenia, Croatia, the Netherlands, Portugal, Belgium and Switzerland.

Finland said it would take 11 of the minors. The children would be among the 175 particularly vulnerable asylum-seekers from the Mediterranean region the government had already decided to take in last spring.

Switzerland, which is a member of Europe's passport-free Schengen travel zone though not part of the EU, said it plans to take in around 20 children.

However, as the children have already been taken off the island and provided accommodation elsewhere, the pledges don't address the immediate need of more than 12,000 people still on the island and in need of emergency housing.

A program was already in place before the fire for several European countries to take in some of the thousands of unaccompanied minors, mostly teenagers, in refugee and migrant facilities across Greece.

The first fire in Moria on Tuesday night left around 3,500 of the camp's inhabitants homeless, Greece's migration minister had said. Tents were flown in and a ferry and two navy ships were to provide emergency accommodation. But the remnants of the camp were burned down on Wednesday night, leaving the remaining inhabitants with nowhere to stay.

Scramble to respond to Lesvos crisis amid arson probe

Third fire breaks out in Moria

Lesvos migrants sleep on roadsides, housing them to take days