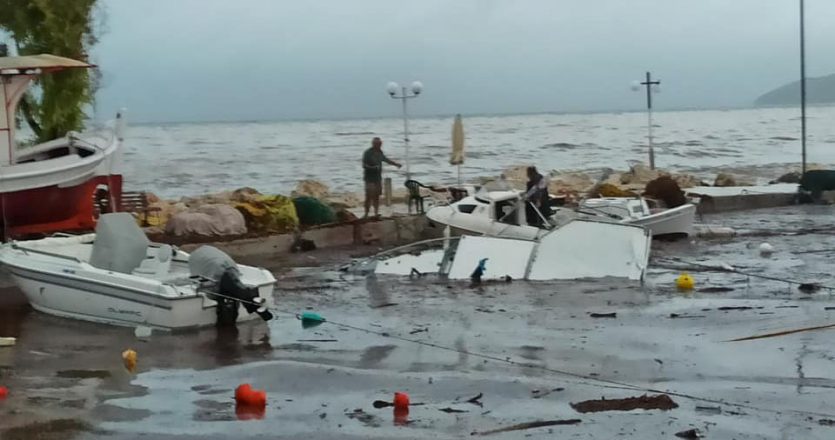 Some damages were reported in western Greece as a result of the rare Mediterranean cyclone that has hit the region, but there were no injuries, Deputy Civil Protection Minister Nikos Hardalias said on Friday morning, after a meeting at the ministry.

He said power outages were recorded on the Ionian islands of Zakynthos, Cephalonia and Ithaca and municipal crews in cooperation with the fire service are working to restore the network.

The strongest winds hit Ithaca, Cephalonia, Zakynthos and western Achaia with gusts that exceeded 80 km/h. The highest rainfall was recorded in Ithaca (86 mm), but due to extensive power outages many meteorological stations of did not report newer data after 4 a.m.

The fire brigade said citizens on all three islands had called in to report falling trees and some houses had flooded but so far there were no reports of people trapped in homes or cars.

In Ithaca, a moored Swiss-flagged sailing boat was swept away by strong winds and smashed on a rocky shore in the sea area of Schinos, east of the island. The two occupants managed to reach the shore by themselves and are in good health.

“We remain on full alert,” Hardalias said, adding that the next nine hours will be crucial for the development of the severe weather system.

He also said the regional units of Magnesia, Arcadia and possibly Fokida will be affected, while as of Saturday, the storm will hit Attica and Evia, noting that these areas will receive large volumes of water.

Emergency services get ready for cyclone

Eight regions in state of special mobilization ahead of tropical storm

Greece braces for cyclone as it approaches western regions

Storms and gales on the way, weather service warns