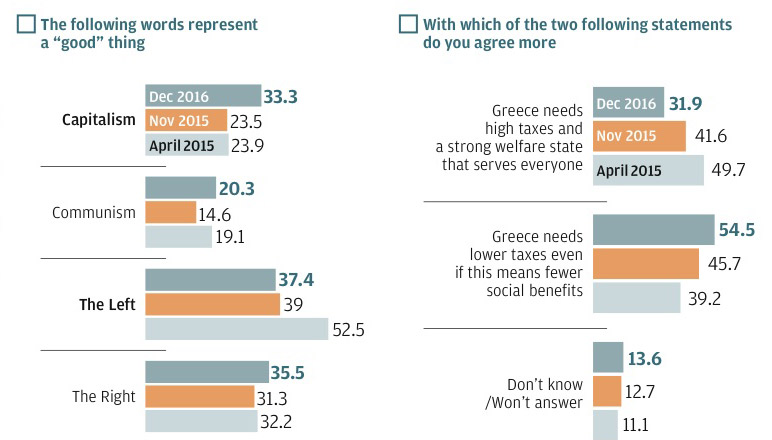 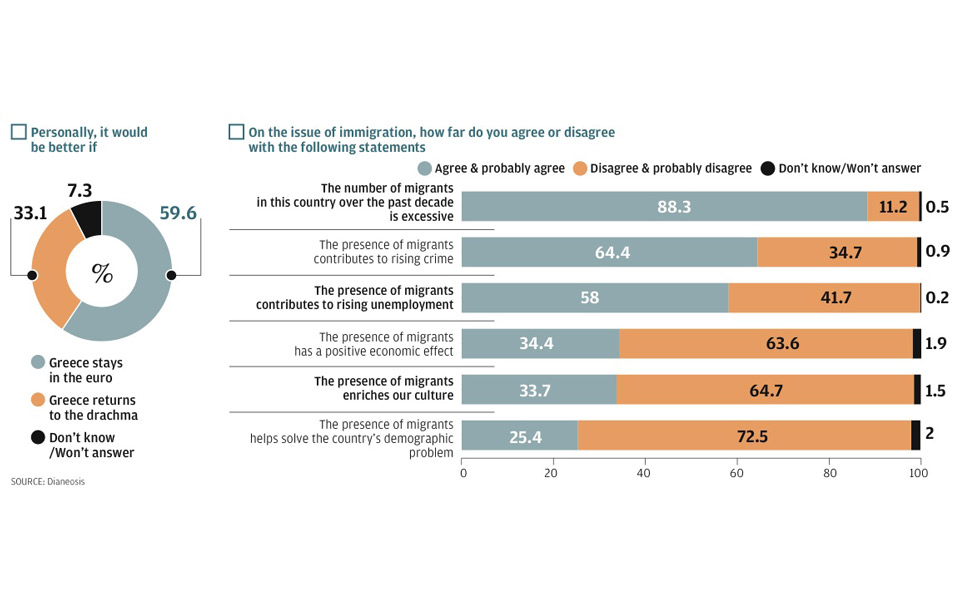 On a superficial level, the findings of the third “What Greeks Believe” survey by the Dianeosis nonprofit think tank – published exclusively by Kathimerini on Sunday – appear contradictory. A deeper reading of the impressive and incisive 305-page report, however, shows a certain consistency. This edition of the survey (the first two were conducted in April and November 2015), with a new and broader questionnaire, was conducted in cooperation with the University of Macedonia in December 2016, based on a sample of 1,294 respondents for the first part and 1,263 for the second.

“What Greeks Believe” is like a detailed x-ray of society, and the part focusing on the crisis, its causes and possible solutions (“Economy, state, private initiative”) is particularly interesting. Here, we see a prevalence of realism and a desire for a new development model that is more open and less dependent on the state.

In short, this part of the survey tells us that Greeks would like to see a smaller public sector and lower taxes – even if this means a reduction in social benefits – with growth driven by foreign investments and exports, rather than the spending policies of a “populist government.” Globalization, which three in five see as a threat to Greece on an abstract level, is also regarded as the only way to return to prosperity.

Other findings, however, from the first part of the survey, titled “Greeks, Europe, the World and National Identity,” offer a different picture. They point to a society that is insular, phobic toward the world at large, leery of change, and stuck on unfounded theories that don’t stand the test of reality. Euroskepticism continues to gain ground as the belief takes hold that Greece has enjoyed few benefits from its participation in the European community. One in three Greeks believes that the country’s interests would be better served by an alliance with Russia rather than remaining in the eurozone, while a large majority said they believe in the existence of nefarious hidden forces that shape historical developments.

Hostility toward migrants also remains high, as almost one in two Greeks has a negative view of Muslims and two in five admit to being bothered by the construction of a mosque.

The conclusion that can be drawn from the part of the survey concerning the crisis is a sense of pragmatism and acknowledgment of a new reality. For example, 62.1 percent of respondents admitted that “our own failures” are largely responsible for the crisis, while just 9.7 percent put it down to foreign influences. A large percentage (76 percent) put the onus on society at large, which had become accustomed to living beyond its means, while a smaller percentage blamed the global financial system (59.4 percent compared with 77.3 percent in April 2015).

The gap between those who believe the state is overly interventionist and those who think it doesn’t intervene enough has also grown significantly to 28.8 points from 11.4 in the April 2015 survey. A reversal of public opinion is also evident in the choice between high taxes and a strong welfare state versus lower taxes and limited social benefits. In April 2015 the former position was ahead by 10.5 points, while in the latest survey, the champions of lower taxation led by 22.6 points.

According to 62.4 percent of respondents, Greece needs a smaller public sector. Just 21.8 percent believe that a rebound will come from raising state salaries and pensions, against 73.2 percent who said that the government needs to provide incentives to attract investment and boost exports as a means of economic recovery.

The experience of the last two years has led to an increase in the share of respondents who believe it is naive to think that tax evasion can be curbed in Greece (71.1 percent from 62.2), while 38.9 percent view tax dodging as a “justifiable defense” against overtaxation.

Finally, 84.4 percent of Greeks have a positive view of foreign investments, with 92.1 percent saying they create jobs and 88.8 percent that they introduce new technologies. The percentage of skeptics – regarding the effects of foreign investment on workers’ rights and national sovereignty – was lower in this survey than in that of April 2015. Yet the conversion to realism is not complete: Just 5.8 percent of Greeks agreed that the retirement age should be above 65 years old, while 51.7 percent said it should be below 60.

Greece is still a long way from becoming a tolerant society, according to the survey’s findings. As many as 46.6 percent have a negative view of Muslims, against 36.3 percent with a positive view, while 49 percent have a negative view of immigrants, against 37.6 percent with a positive opinion. Furthermore, 88.3 percent agree or possibly agree (80.1 percent plus 8.2 percent) that the number of migrants in Greece over the past decade is excessive, 64.4 percent said migrants contribute to rising crime rates and 58 percent hold them responsible for growing unemployment. In contrast, only 25.4 percent view migrants as part of a solution to Greece’s burgeoning demographic problems.

It is worth noting, however, that though these percentages are high, they are significantly lower than the corresponding answers in April 2015, particularly in regard to migrants’ contribution to crime.

Asked what needs to be done with undocumented migrants in Greece, fewer than one in five Greeks are in favor of them being integrated, either fully (2.2 percent) or gradually and under certain conditions (17.5 percent). The remainder would opt for different means of removal/relocation, among which 20 percent are in favor of immediate deportation.

Greeks’ view of their own national identity also seems to be affected by their fears concerning migrants and the refugee crisis: 47.2 percent told researchers they believe national identity to be a question of genes rather than choice and 36.1 percent said people who do not have Greek parents cannot be regarded as Greek.

In other respects, however, Greeks seems to be more tolerant than they were in the past, albeit well below the averages of most developed countries. For example, 50.4 percent of respondents said they are in favor of same-sex marriage in this survey compared to 36.3 percent in April 2015.

On the subject of criminal justice, too, Greeks seem to be moving closer to European norms, as the percentage of respondents who want to see a return of the death penalty dropped to 29.2 percent in December 2016 from 41.2 percent in April 2015.

Turning against the left and embracing conspiracy theories

A bent toward conspiracy theories and skepticism toward the West are more than evident in the Dianeosis survey’s findings.

For example, 80.5 percent of Greeks see secret organizations both in Greece and abroad working behind the scenes to influence developments, while 26.5 percent admitted to espousing the chemtrail theory (the percentage is above 50 percent among Golden Dawn supporters and 37 percent among supporters of Independent Greeks).

Another interesting finding is that left-wing politics appears to be losing its luster: Positive views of the left declined from 52.5 percent in the April 2015 survey to 37.4 percent in the most recent one. The left, however, still remains more popular than capitalism.

Furthermore, a significant 62.3 percent of Greeks believe the nation stands out for its intelligence and culture, though this was down from April 2015’s percentage of 72.9.

In terms of how these views were formed, 52.8 percent of respondents said they get their information from the Internet (with another 3.3 percent specifying social media and blogs). Almost one in five (18.6 percent) admitted to not having read any books in the past 12 months; 43.1 percent did not visit any museums and 46.8 percent did not go to any theater plays.

The percentage of respondents who have a positive or probably positive view of Greece’s participation in the European community (EEC and EU) shrank to 53.5 percent in the December survey, down from 68 percent in April 2015. In a question asked for the first time by Dianeosis, 47.7 percent agreed that “the EU has structures and expresses interests that do not serve Greece,” just slightly less than the 48.9 percent who agreed that “the EU constitutes progress and Greece must remain a part of it.”

Looking at specific areas, it comes as little surprise given the experience of the last two years that 48.8 percent of respondents believe Greece is at a disadvantage in terms of economic growth and prosperity because of its participation in the European Union, compared with 38 percent in April 2015.

More unexpected is the finding that 43 percent said Greece’s participation in the EU harmed the organization of the state and public administration, with just 28.8 percent saying Greece benefits in this area from its membership in the bloc. Meanwhile, only 29.6 percent said Greece had benefited more from its participation in the EU, while 57.3 percent believe that the EU has gained more from Greece. The gap between the two views has grown more than 6 percentage points since April 2015.

On the crucial question of which currency Greece would be better off with, the majority still believes in the euro, though this percentage has contracted significantly. Staying in the euro is supported by 59.6 percent of Greeks, compared with 73.9 percent in April 2015, while those in favor of a return to the drachma have risen to 33.1 percent, from 20.7 in the previous survey. Opinions on the euro differ greatly depending on social class, with 70 percent of higher-income respondents being in favor of staying in the eurozone, compared with 50.1 percent of lower-income respondents.

The decline in support for the common European currency is also associated with the drop in the number of those who believe that the Greek economy will sooner or later achieve true convergence with those of its developed European peers. The percentage has fallen from 31.5 percent in April 2015 to 20.1 percent in December 2016.

Grexit would be catastrophic for Greece

The Greek crisis and the seeds of division