John Kiriakou met Karen Giorno, a former senior campaign adviser to then US President Donald Trump, at his lawyer’s officer in early July 2018. A lot was riding on this meeting for the Greek-American former CIA agent, whose lawyer had gone to great lengths to find someone close to the American president who would help secure his client a pardon, but everyone he had reached out to was too expensive. Giorno, he had been told, would be more reasonable in her demands.

“All of us looking for a pardon knew that we had to reach the president and that we had to pay for this to happen,” Kiriakou tells Kathimerini today.

That meeting lasted around 45 minutes and started with Kiriakou recounting the details of his case and how he was charged in 2012 with divulging the identity of a covert agent to two reporters. He believes his subsequent conviction was basically retaliation for his having spoken publicly about the CIA’s use of waterboarding, a brutal and illegal method of interrogation.

Apart from carrying a sentence of 30 months in prison, the conviction also destroyed much of what he had built after 20 years of hard work: He lost his pension (and $700,000 worth of contributions), could not find work with the state or the government, and could not be certified by the state for any other line of work either. He was also banned from voting and carrying a gun for several years.

Giorno said she could help. Kiriakou says she backed her claim by taking out her phone and showing him her entry for Trump, hiding the last two digits of his number. “‘We call each other often, even late at night sometimes,’” he says Giorno told him. Searching the internet later, he found dozens of photographs showing Giorno with Trump at different events and was convinced that she was telling the truth. “She never came out and said that she could get me a pardon; that would have been illegal. But she did boast a lot about her access to the White House,” Kiriakou clarifies.

They came to an agreement on the way forward in late July. The retainer agreement, published here by Kathimerini, states that Giorno would receive an initial $60,000 plus another $50,000 once a pardon was secured. Kiriakou spent the following months waiting for some good news, encouraged by Giorno’s reports that the case was moving ahead. At one point she asked for an additional $50,000 for expenses and later announced that she had managed to get him on the pardon list, which, however, would first have to be approved by Trump himself.

With no way of confirming that any of this had happened and as the months went by without news, Kiriakou decided to find other ways to push his case to the president. He managed to get himself invited on Fox News six times, knowing that Trump was an avid TV watcher. “I kept repeating the same thing, that I wanted a pardon and that I wanted to explain to him why.”

He got a call from the office of Jared Kushner. “What do you want with the president?” Trump’s son-in-law is said to have asked when they met. Kiriakou stated his case and was told to write a letter comprising three paragraphs of his story and one of how he would help get the president re-elected in November 2020. Kiriakou did as he was asked and sent the letter, but he never received a reply.

The issue re-emerged a year later, in the spring of 2020, during a business venture (selling Chinese face masks to the Department of Defense) that got caught up in red tape. In a bid to overcome the bureaucratic obstacles preventing him and his partner from sealing the deal, Kiriakou contacted the office of Rudy Giuliani, Trump’s personal lawyer. Before he had a chance to explain what he wanted, the associate he was speaking with took him by surprise, saying, according to Kiriakou: “Let me guess? You want to talk about a pardon.” “No, actually, I want to talk about masks,” the Greek American answered. That comment though, got him thinking that perhaps Giuliani was his man.

When the two eventually met in the bar of Trump’s hotel in Washington, DC, they worked out a solution for the mask issue and, Kiriakou says, he also asked Giuliani whether he could help him with the matter of the pardon. The lawyer looked at him and got up from the table without saying anything. That’s when the associate he had brought to the meeting took over: “He never talks about that issue himself. But we can talk about it if you want. For starters, it’s going to cost you $2 million,” Kiriakou reports the associate as saying. Kiriakou laughed when he heard the figure. “Two million bucks – are you out of your mind?” he reportedly said. “Even if I had 2 million bucks, I wouldn’t spend it to recover a $700,000 pension.” That comment more or less brought the conversation to an end.

A few weeks later, Kiriakou confided in a friend about the incident, who decided to report it to the FBI. When he got no response from the bureau, he decided to go public. The New York Times investigation that followed demonstrated that apart from Kiriakou, many others had to pay for the president’s ear, but also how Trump used the presidential pardon to reward friends and allies.

“It is clear that I was not alone. I personally know two people who paid an exorbitant amount of money to get it done, so it’s only reasonable to assume that it was something you could buy. However, it had been set up in such a way that there were no legal repercussions, raising the usual discussion about the line between legal and moral. As far as I’m concerned, though, there is only one conclusion that can be drawn: that in Trump’s America, justice was something you could buy,” says Kiriakou.

Kiriakou had first started seeking a pardon in 2016, from outgoing president Barack Obama. He had a lot of support at the time, from politicians and 65 CIA officers, but mainly from the Greek-American community. He says that the issue of money never came up in those days. “Quite the contrary; they helped me financially,” he says of the people who tried to forward his case and essentially of specific members of the Greek-American community. They had managed to convince then Vice President Joe Biden to speak on his behalf to Obama, but the list had already been drawn up and Kiriakou wasn’t on it.

That fact gives him hope that President Biden knows of his case and will deem his request justified. As we wrap up our interview, he asks to share another incident that he feels grateful for.

“A former associate I was trying to do business with in Greece informed me that he had gotten a call from the foreign minister, Mr [Nikos] Dendias, expressing the Greek government’s intention to help with his pardon plea and that later President [Katerina] Sakellaropoulou herself had written a letter and Mr Dendias had contacted the White House on the matter,” he says.

The fact, of course, that Dendias and his associates denied that this incident ever happened when asked by Kathimerini, and even stated not knowing anything about the case or Kiriakou’s associate, indicates that the former CIA agent has again fallen victim in his effort for justice. 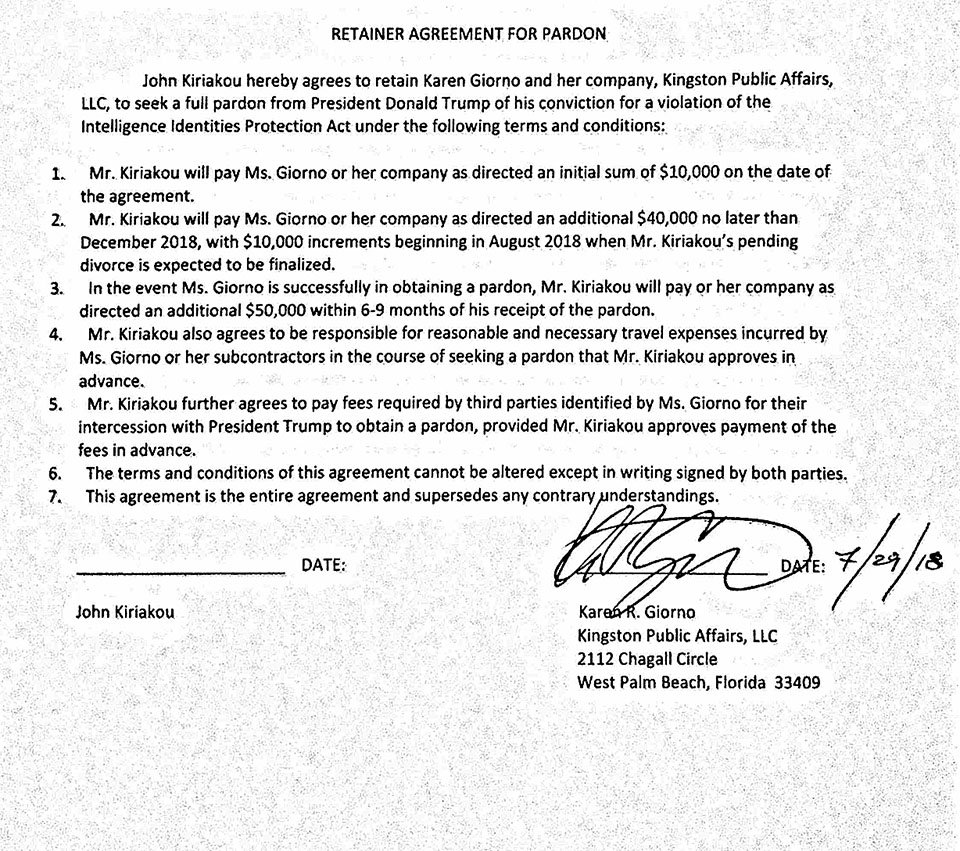 Dialogue with Turkey is preferable to war, Avramopoulos tells Kathimerini

Bill Antholis: US should cooperate with Greece on Turkey

‘New McCarthyism will prove an Orwellian mistake,’ says US historian