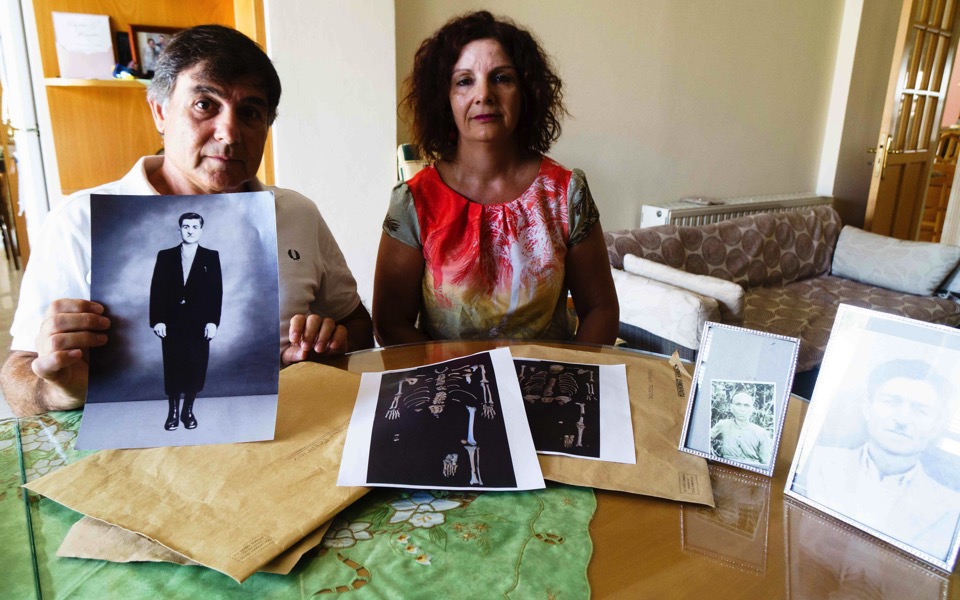 The grandson of Antonis Christofi holds the portrait of his grandfather, who went missing along with 2000 other people during the Turkish invasion of Cyprus. 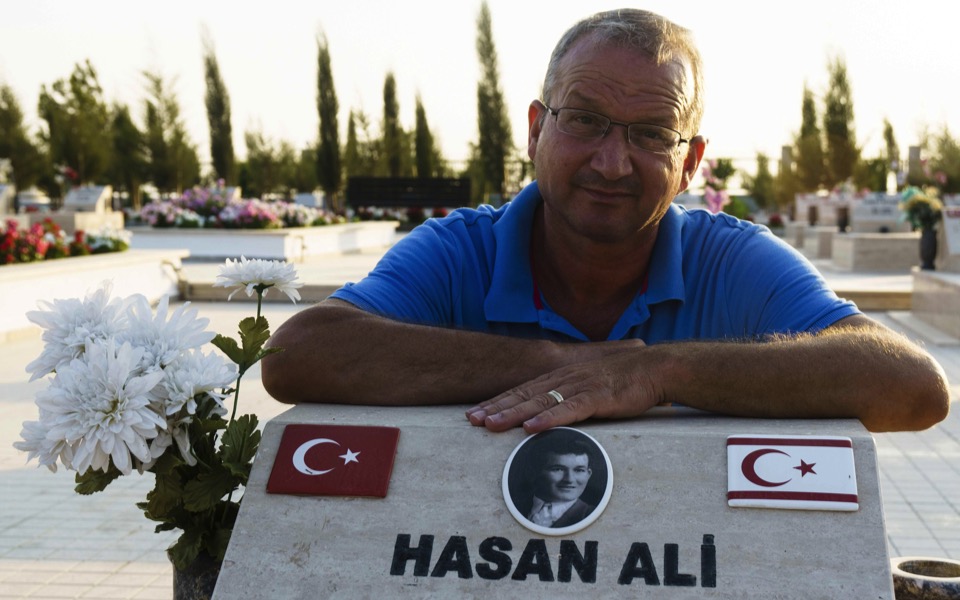 Turkish Cypriot Erdinc Erdagli, the head of the Tashkent missing persons local committee, poses next to his father's grave in a cemetery in the village of Tashkent in the Turkish-occupied part of Cyprus. 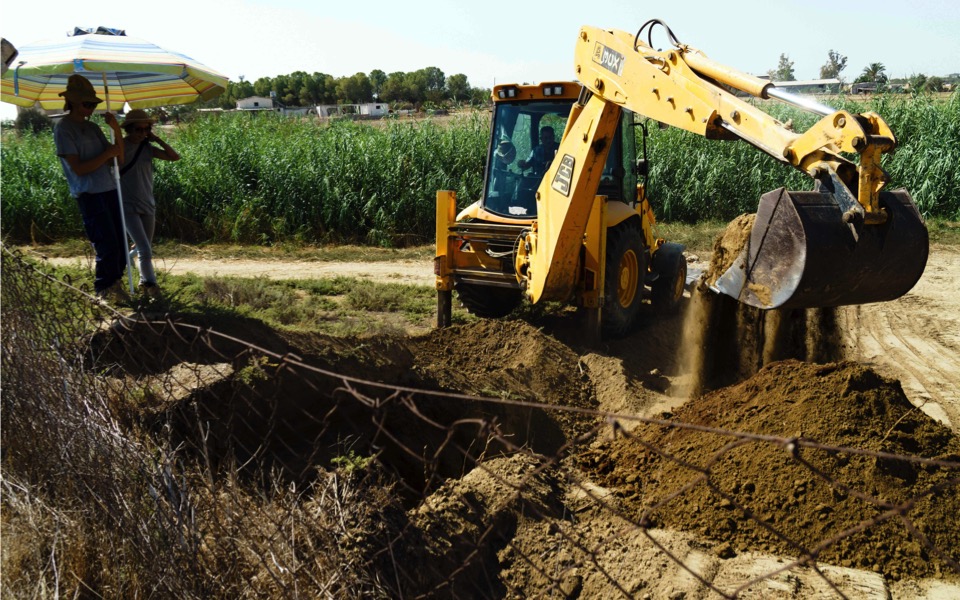 Greek and Turkish Cypriot archaeologists of the Committee on Missing Persons (CMP) dig as they work to unearth remains of missing Greek Cypriots in the Turkish-occupied part of Cyprus.
PATRICK GALEY
August 27, 2016 27.08.2016 • 11:42

As Turkish troops approached his village on August 14, 1974, Georgios Kantoni packed a simple meal of bread, cheese and watermelon for his family and sent them to hide in the wheat fields.

Antonis Christofi, Kantoni’s grandson, was 14. It was the last time he would see his grandfather.

“We were afraid because we heard people say the Turkish were killing villagers,” Christofi remembers.

Kantoni refused to leave his home. He was shot dead days later, his body flung in a shallow lake a few hours’ walk from the village. His wife was killed and thrown down a nearby well.

They were among more than 2,000 people who went missing in violence between Greek- and Turkish-Cypriot communities in 1963-74, which culminated with the Turkish invasion of the island that August.

More than 40 years on, the task of retrieving and identifying the ghosts of Cyprus’s mass killings falls to the UN-backed Committee on Missing Persons (CMP). Its team of Turkish- and Greek-Cypriot specialists has identified the remains of about 680 people since 2008.

The Turkish invasion, in response to an Athens-inspired putsch, left the island and its Turkish- and Greek-speaking communities bitterly divided. Now, as long-stalled peace talks foster increasing good will, the CMP – itself a rare example of cooperation between communities on the island – wants to find as many bodies as possible.

“Every missing person is a symbol of what we did to each other,” says Turkish-Cypriot CMP member Gulden Plumer Kucuk. “Our work needs political will to continue.”

For Christofi, the CMP’s discovery of his grandparents’ bodies in 2014 – four decades after their deaths – came as a shock.

“Now we at least have a place we can visit them,” he tells AFP, clasping a photograph of his grandfather’s skeleton, its right shoulder blade cratered by a bullet.

“But there is always the why. Why did these old people die this type of death? They didn’t do anything to anybody.”

Hiding from the sun under a flower-print beach umbrella, archaeologist Maria Solomou watches an earthmover scrape strips of soil from a riverbank 20 kilometers east of Nicosia in the Turkish-occupied north. She has information that seven bodies are buried here.

“When you’re looking for bones you have to work slow,” Solomou explains. She estimates she has personally found the remains of more than 70 people for the CMP.

The excavator unearths bone. Solomou sets about the painstaking process of extricating the remains in the punishing August heat. With about 1,000 bodies still missing, the CMP has a problem. Most of the missing disappeared four decades ago. Witnesses to their deaths or hurried burials grow old, misremember. Some die.

The discovery last year of around 30 bodies north of Nicosia is a case in point.
From witness statements, dig teams knew roughly where a mass grave might be. But they only found remains after an improbable tip-off from a 94-year-old shepherdess. Without her directions, remembered precisely from 42 years earlier, the bodies may have gone undiscovered.

“How many more years would we have been able to get this information?” says Florian von Koenig, a UN representative in the CMP. “Our biggest thing we need – information – is increasingly hard to come by.”

One source of hope is the decision last year to allow CMP teams access to Turkish military sites, with their dozens of potential graves. In a white, humidity-controlled hangar near Nicosia’s abandoned airport in a UN buffer zone, 90 identical cardboard boxes line stacks of metal shelving.

In them are dozens of remains of people, some women and children, killed by Greek-Cypriot militiamen in 1974 and dumped in a mass grave near the port of Famagusta.

Each identification provides both relief at the end of decades of uncertainty, and grief over the death of the hope, however forlorn, that loved ones are alive.

Dina Papachristou, 69, has not seen her daughter, son-in-law and 7-year-old grandson since they disappeared in 1974. She still clings to a belief that they weren’t killed that summer.

“I just want to find them,” she says, arranging black-and-white images of the schoolboy on a tablecloth strewn with family Polaroids.

In Tashkent village, north of Nicosia, workmen paint a curbside skirting a gleaming cemetery complex. Thirty-five Turkish-Cypriot men killed in 1974 were finally laid to rest there this month.

Erdinc Erdagli, head of a local missing persons committee, says the CMP has identified 80 villagers found in a mass grave near Limassol.

They include his own father, who he buried in 2014. Down on his haunches, Erdagli cups his hand to shield from the breeze a single pheasant feather – a symbol of his father’s love for game bird hunting – and stands it beneath the marble headstone.

“You feel the pain of loss at special moments,” he says. “You graduate from school, get married, have a child, but your father is not with you. This is the most difficult situation a man can face.”

Refugee who made it returns with drone to halt drownings