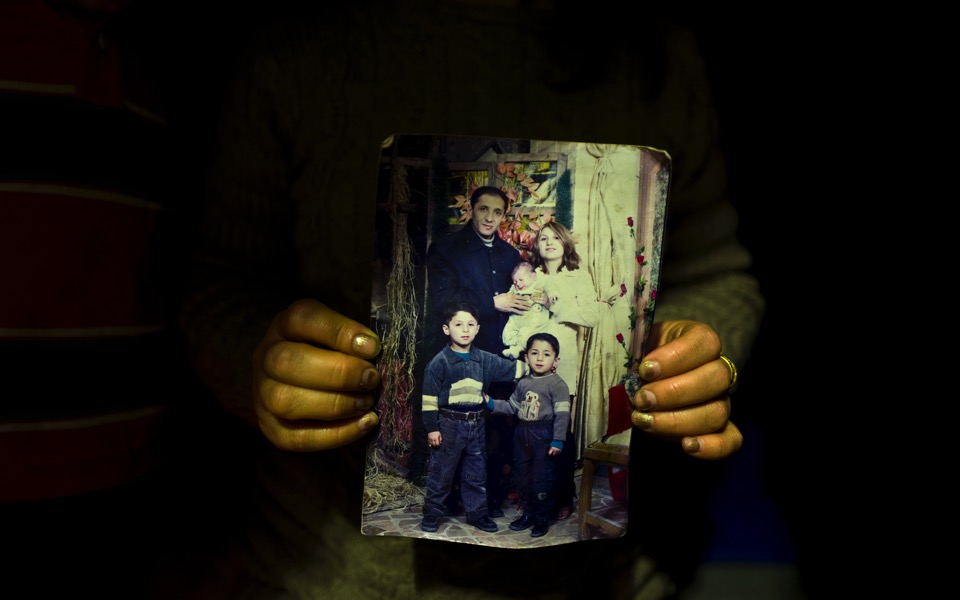 Fidan Kiru, 31, a Syrian refugee from Afrin, holds a photograph taken in 2004 showing herself and her husband Mohyeddin, when he was 27-year-old, and her sons, younger to older, Avindar, 8 months, Khalid, 4 and Levant, 6, at her tent in Kalochori refugee camp on the outskirts of the northern Greek city of Thessaloniki. 'This is the only group family picture we have, my husband is currently in Germany and I hope they will allow me to join him,' Fidan said. 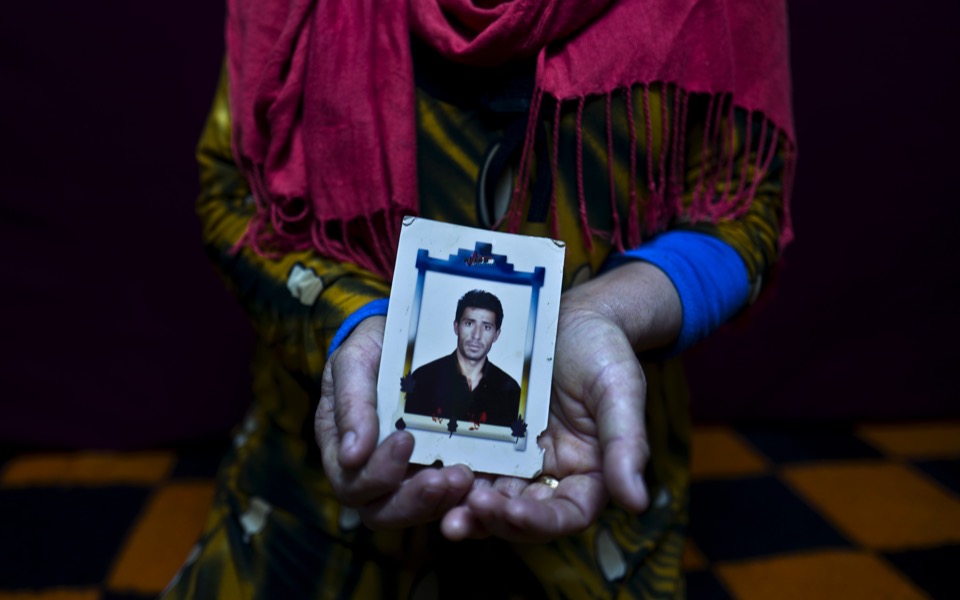 Heven Daood, 39, a Syrian refugee from Tell-Tawil in al-Hasaka, shows a photograph of her husband Reiad, 45, at her shelter in Ritsona refugee camp, Greece. 'I have this photograph with me for the last 10 years, it is a very precious picture, my husband used to travel a lot for work and this image always remained close to my heart.' 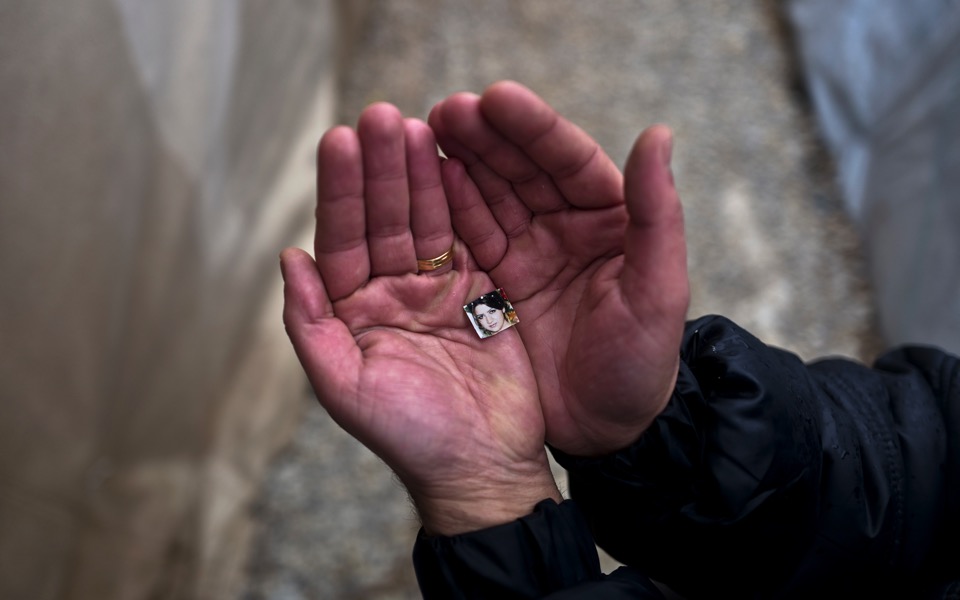 Rustum Abdulrahman, 35, a Syrian refugee from the northern district of Al-Ashrafiya, Aleppo, shows a photograph of his wife Zuzan, 33, at Ritsona refugee camp, Greece. 'I keep this image always with me, I made it as small as possible so no matter what it won't be damaged and will never loose it, my wife is my best friend and the partner of my life,' Rustum said. 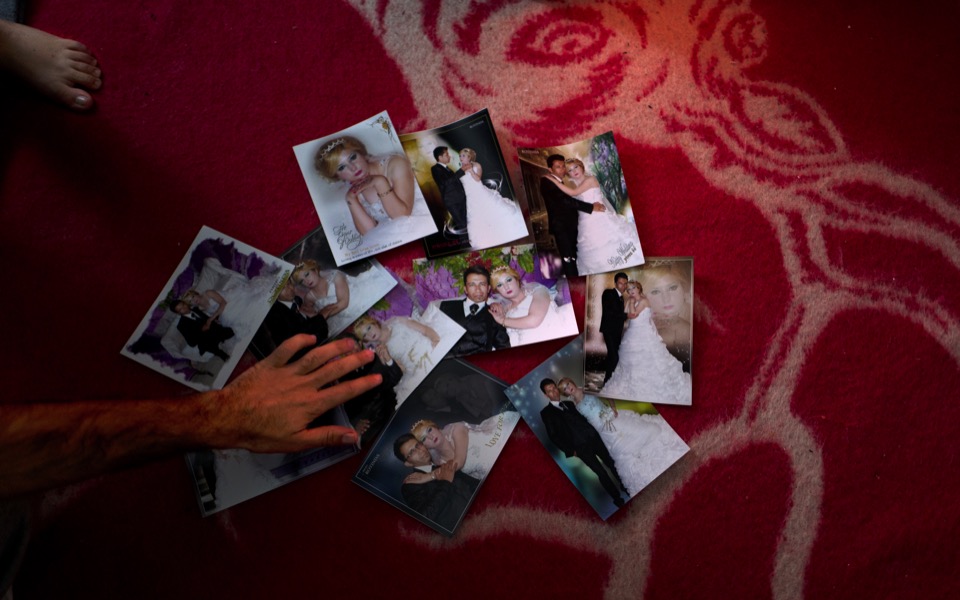 Sheikhmous Hussein, 33, a Syrian refugee from the northern district of Al-Ashrafiya, Aleppo, shows photographs from his wedding day, at his shelter in the refugee camp of Ritsona, Greece. 'It was on the 8th of March 2014, these photographs were the only thing we managed to carry with us from Aleppo,' Hussein said. Habeeba Waqas, 40, a Syrian refugee from Aleppo, holds a photograph showing her husband Mohammed and her father in law Suliman at her tent in Frakapor refugee camp on the outskirts of the northern Greek city of Thessaloniki. 'This is the only memory that I carried with me from Syria, my husband was young and handsome in this picture,' Habeeba said.
Newsroom
February 1, 2017 01.02.2017 • 10:14

They fled their homes in war-torn Syria with only what they could carry on their backs. Then many were forced to leave even those bags on the shores of Turkey as they embarked on a short but dangerous boat ride across the Aegean Sea to Greece. The one thing they managed to keep with them was photographs.

Some bring back happy memories that help cut through the sadness at leaving everything they knew behind. Nadima Allo couldn’t hold back the tears as she talked about the home in Aleppo’s northern district of Sheikh Maqsud where she and her husband, Henef Slu, 37, lived with their two children, now aged 5 and 6. They’re in a shelter at the Ritsona refugee camp about 86 kilometers north of Athens.

Her husband showed a photo of their wedding day in 2010, saying: “It was the most beautiful day of my life the day I got married to my wife, Nadima. We had a lot of guests, family and friends. This photograph was the only thing we carried with us from home.”

Amineh Hamad and Ali Abdulqader, both 58, carry a photo of them on a summer day in 2010 that they spent at the Roman site of Busra al-Sham, a place they dream of returning to. It was one of a few photographs they brought with them when they left their home in the Eastern Ghouta region near Damascus. They’re also living in the Ritsona camp, but hoping to settle in a European city and start their life over again.

“We had a barbecue, walked and laughed a lot, a day from life, we miss these days, we hope one day it will come back,” Hamad said.

Others carry reminders of relatives left behind, or those who have gone on ahead to Europe. More than 62,000 refugees and other migrants have been stuck in Greece since a series of Balkan border closures and a European Union-Turkey deal on stemming migration. Almost all hope to be granted asylum and be resettled in other European countries, so they are not directly affected in terms of refuge by the recent order halting the US refugee program.

“When you are in fear of your life and forced to flee your home, what mattered the most after being safe is these memories, the photographs of my children,” said 40-year-old Sahar Dargzini, who shared pictures of her two sons and two daughters when they were small. They now range in age from 15 to 26. One lives in Turkey and two in Sweden. Dargzini, who fled Damascus and has been living in a tent with her husband in a Greek camp in the northern city of Thessaloniki for the last seven months, hopes to join her oldest daughter, Dania, 26, who is living in Norway.

“I want to see my granddaughter for the first time, I want to be able to hold her in my arms and tell her that I am her grandmother,” she said. [AP]

Muhammed Muheisen is The Associated Press chief photographer for the Middle East, Pakistan and Afghanistan and a two-time Pulitzer Prize winner.

The trauma of stranded refugees

Syrian chef serves up slice of home in Greek camp