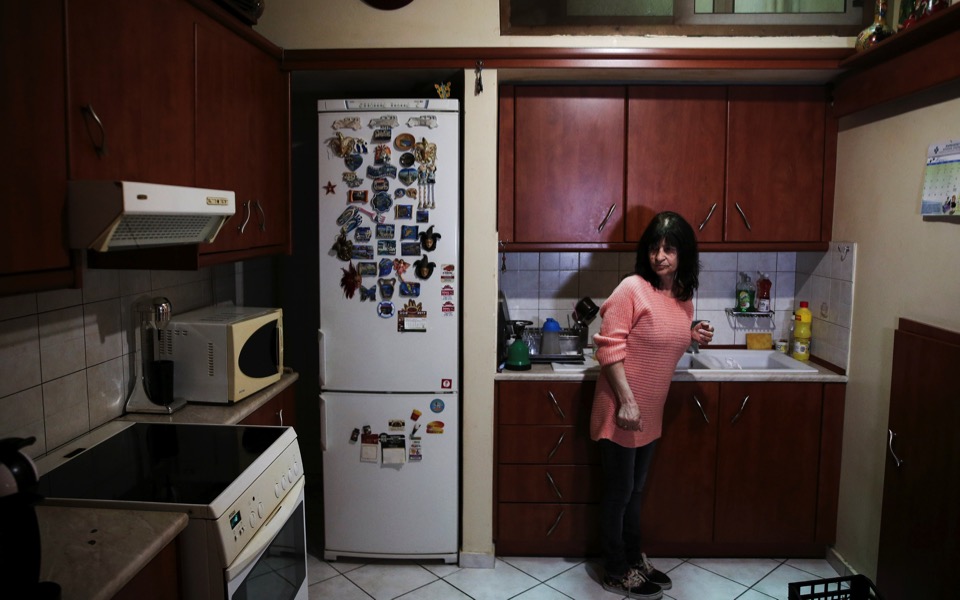 Eleni Skopelitis in her kitchen in the suburb of Nikaia, in Athens. The Skopelitis family house is up for auction in September as they cannot longer pay their monthly loan obligations. 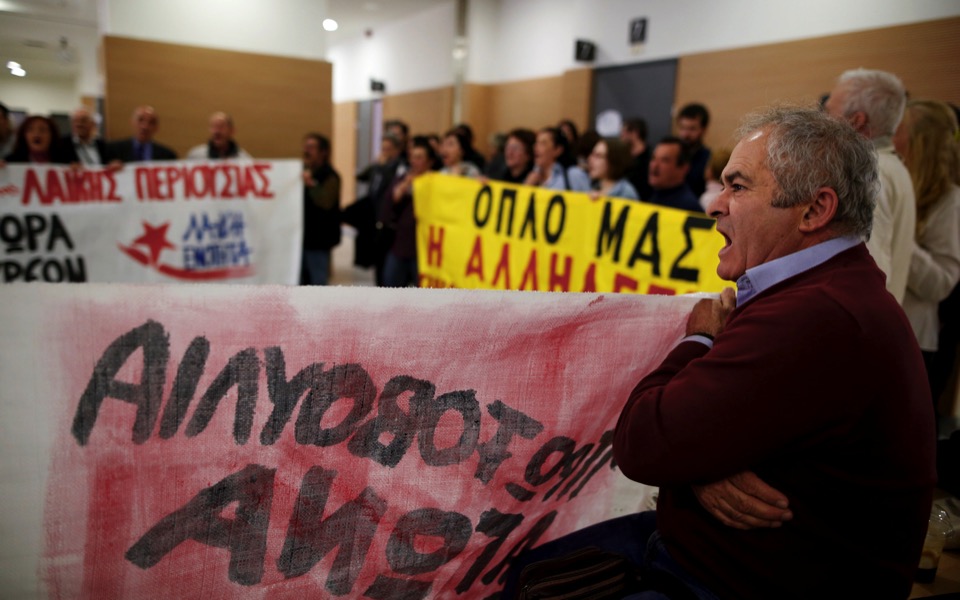 Protesters shout slogans as they block an entrance to prevent court officials from entering the courtroom and carry out an auction in Athens.
DEBORAH KYVRIKOSAIOS
March 30, 2017 30.03.2017 • 17:38

Crowds of protesters gathered outside court chamber 7 in central Athens one recent Wednesday, unfurling a huge banner before they moved swiftly to block the entrance.

"No House in the Hands of Bankers" the banner read. In the court a property auction was underway.

On any given Wednesday for the past four years, activists have been taking their fight against austerity to the country’s civil courts, fighting for people driven into poverty as a result of Greece’s debt crisis and international bailouts.

Occasionally, skirmishes break out with police. But Greece is a country where the right to protest is considered sacrosanct, so the activists come back, week after week.

"People are fed up, they are exhausted from being incessantly pounded by payments and debts," said Leonidas Papadopoulos from the activist group Den Plirono, meaning I Won’t Pay.

Advocating civil disobedience, I Won’t Pay emerged in 2012, tapping into public anger with austerity imposed by the European Union and International Monetary Fund in exchange for bailout loans.

A loose collective of about 10,000 members, of which between 300 and 400 are regular activists, Papadopoulos says court incursions of I Won’t Pay have thwarted 4,000 auctions annually over the past four years.

Reuters could not independently confirm the claim, but there would have been plenty of opportunity given that home ownership in Greece is about 75 percent, among the EU’s highest, and austerity has caused widespread failure.

Bad loans, or non-performing exposures (NPEs), reached 107.6
billion euros in the third quarter of 2016 at Greek banks, with about 31 percent of that concerning housing loans, according to the Bank of Greece.

Part of that is down to a 2010 law protecting primary residences, allowing arbitration between creditors and lenders.

Papadopoulos says its also because of their activism.

But for some, it was too little, too late.

Electrician Vassilis Skopelitis was a casualty.

On a hot summer morning in 2016 a bailiff, locksmith and a bank clerk turned up at his modest two-storey dwelling in an Athens suburb to evict its occupants, including a bedridden 93 year old man.

"I asked where was he to go. They said they didn’t care," said Skopelitis, 55, of his now deceased father-in-law.

The family got a reprieve when local activists and a mayor intervened, but he expects a new eviction attempt in coming months.

With an income from a social benefit at 200 euros a month, Skopelitis says bank payments are impossible. "I don’t have money to eat," he says.

When his electrical goods store started failing in 2009 he couldn’t afford mortgage payments on a 160,000 debt for his two-storey home.

In 2012, his home was confiscated by a bank, and the following year banks foreclosed on the homes of his two adult children also, left unemployed by the crisis. They now live with him.

The stress of it all, he said, gave him a heart attack in 2015. And yet the phone bills and letters for payment persist.

Skopelitis’s hopes are now pinned on getting a disability pension so he could rent a home in the countryside and possibly grow his own food. But he says he will resist leaving his home for as long as he can.

"Our dreams have died.. Our dreams for life … died with this house."

After seven years of bailouts, Greeks sink yet deeper in poverty

‘If they’ve had a good time, it shows in the tip’

Initiative for recycling clothing and shoes starting to take off