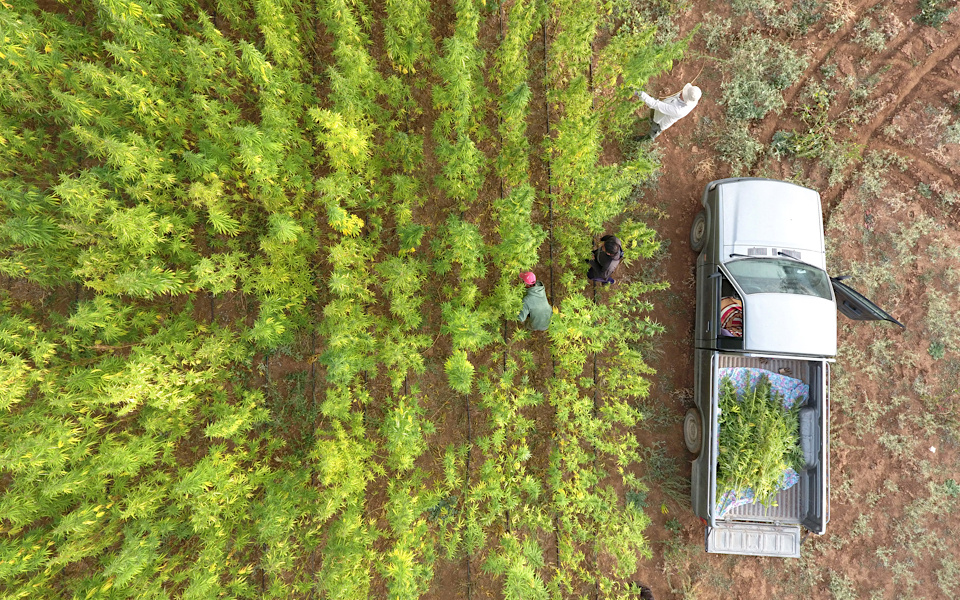 After 60 years of prohibition, the cultivation of cannabis for medicinal and industrial purposes is making a return as new legislation eases restrictions. [Giorgos Moutafis] Apart from harvesting industrial hemp, the Kannavi collective also informs and educates the public on the potentials of cannabis and hemp in industry and medicine. [Giorgos Moutafis]
Lina Giannarou
November 3, 2017 03.11.2017 • 14:22

Early in the morning on the Mantineia plateau, the air is chilly. Even in summer, the temperature drops considerably during the night despite climbing above 30 Celsius during the day. “Big swings in temperature aid the production of resin in cannabis plants,” Argyris Mountzouris told us as he laid out a large cloth on the ground upon which to collect the plants.

With a magnifying glass, he showed us the tiny trichomes on a flower that produce cannabidiol (CBD) oil, a major nonpsychoactive component of Cannabis sativa with anti-inflammatory, anticonvulsant, antioxidant, antiemetic, anxiolytic and antipsychotic properties.

We were in a field in the uplands of northern Arcadia, in the northeastern Peloponnese, where members of To Kannavi, a collective that also informs and educates the public on the potential of cannabis and hemp in industry and medicine, were harvesting industrial hemp one day in early September. To Kannavi comprises people in various businesses that make use of the plant, among them a fast-food chain which uses cannabis flour in its pizza bases. At the same time we learned that growers around Volos, Xanthi and other parts of Greece were also beginning the annual harvest of the Cannabis sativa plant.

This was To Kannavi’s second harvest. Their first was last year, in Thiva, northwest of Athens, after the announcement of a joint ministerial decision to legalize the cultivation of industrial hemp in Greece after it had been banned for 60 years. Greek producers have since been free to plant varieties of cannabis included in a list deemed legal by the European Union which have a THC content lower than 0.2 percent. THC, short for tetrahydrocannabinol, is the psychoactive constituent of cannabis which makes users feel high. Industrial hemp is rich in CBD oil, which has proven effective as a form of treatment for neurological disorders such as epilepsy and multiple sclerosis. Studies are ongoing to find out whether it is effective in treating a wide range of other disorders ranging from asthma to diabetes.

Judging by the size of the plants when we visited Mantineia, the harvest went well this year. Some plants reached 3.5 meters in height. The ground in Mantineia turned out to be more suitable than in Thiva, the Kannavi members told us. “The microclimate here is what we were looking for,” says Mountzouris. It’s no wonder that before it was banned in 1957 Arcadia was a big producer of both textile cannabis, low in THC, used to make rope, sacks and cloth, as well as indica for hashish. In 1904, the Moreas newspaper reported that the hemp harvest in Mantineia that year came to more than 6 million kilos.

Members of the Agricultural Cooperative of Tripoli have made good use of the change in the law. Following the drop in the price of potatoes in the last year, hemp production has provided them with a more profitable alternative.

In addition to the plant’s uses, researchers are also studying its cultivation – for example where it grows best – boosting research and the creation of a database that will help future growers. To Kannavi also provides data to the Hellenic Agricultural Organization (ELGO). “Last year we tried producing seeds. This year, besides the seeds and stems, we focused on the flowers,” Alexandros Delistathis, a member of To Kannavi, told us. “Cannabis has many uses, and all parts of the plant can be used. From the stems you can make chipboard and even bioplastics. From the seeds, you can make food products such as oil, flour, protein – or even eat them as a snack. From the flower, you have essential oils used in cosmetics and medical products.”

The production of pharmaceutical products from the cannabis plant is still prohibited in Greece. However, there are signs that this could change soon. In June, a joint decision by the Health and Justice ministries changed the classification of cannabis from a class A to a class B drug. This paves the way for legalizing the development of cannabis products for medicinal use. The decision was supported by the conclusions of a scientific committee that was part of an initiative by Health Minister Andreas Xanthos. For now, an institutional framework setting the terms and conditions for the production of cannabis-based medical products remains lacking in Greece. A business in Greece can import such products and can even submit a request to the National Organization for Medicines (EOF) for the manufacture of cannabis-based medicine, but the raw materials must be imported. “Essentially cannabis oil is the byproduct of a legal cultivation which we can’t make proper use of,” said Delistathis.

However, Greek scientists are allowed to conduct research with the plant. Flowers and stems from the Mantineia fields are being studied at Athens University’s pharmaceutical and natural chemistry lab. Since last year, the lab has been studying the medicinal effects of industrial hemp.

“Our research is focused on cannabis oil, as there is an abundance of it in industrial hemp,” said Leandros Skaltsounis, a professor at the University of Athens. “Additionally, we want to see how much of the oil is produced depending on the location the plant is grown in. The second stage will be to develop innovative techniques for using and processing the extract for medicinal use,” he added. New regulations regarding the latter will be published soon which are expected to free up the market for the production of medical products.

In Mantineia, after the harvest, we learned the flowers would be taken to a storage area where members of the Kannavi team would remove the yellow leaves. They would then collect the seeds and hang up the flowers to dry for seven to 10 days. The stems were to be sent to the Technical Education Institute (TEI) of Western Greece in Patra to be studied and used for compost.

“The stems of the cannabis plant have many uses. We focus on fiber utilization and the residue produced by hemp, which can be used to produce a material that could be used instead of peat for agricultural purposes,” said Giorgos Kotsiris, a researcher of agricultural technology at the TEI in Patra. “Greece pays an enormous amount of money to import peat from Baltic states, and it is a product with a large energy footprint. It would be nice to produce our own substrate, so why not from hemp?”

A Greek malady: Too many doctors, too few GPs

Overcoming the odds to triumph in an ultramarathon