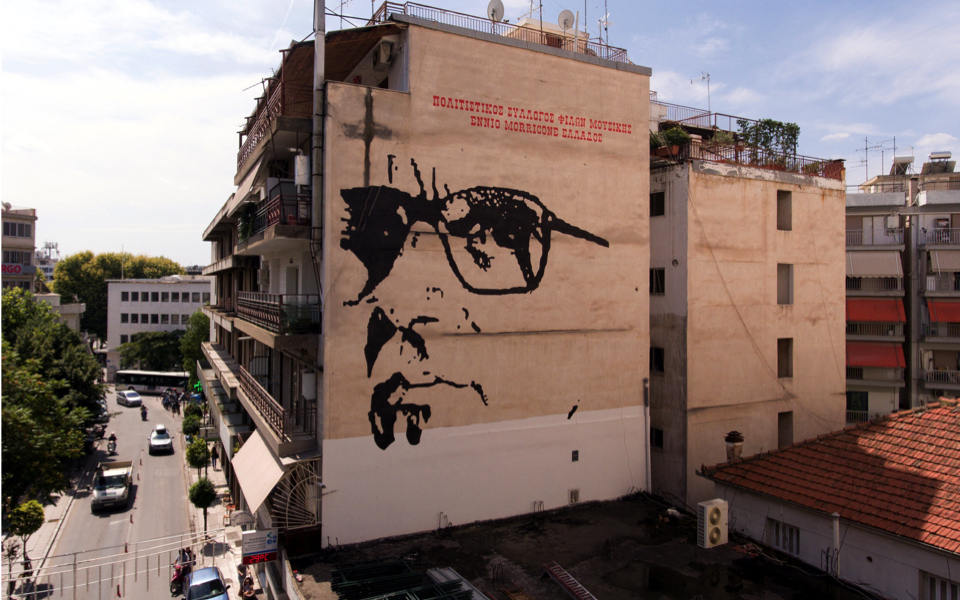 A giant mural depicts Italian composer Ennio Morricone created by Asterios Laskaris, Christos Laskaris and Dimitra Kalogirou under the auspices of the Cultural Society of Friends of Ennio Morricone Music in Larissa.

Once upon a time in central Greece, a small town fell in love with famed film composer Ennio Morricone and painted a huge mural in his honor.

The residents of Larissa have launched a fan club dedicated to the Italian maestro – known for his scores for classic movies “Once Upon a Time in America,” “The Good, the Bad and the Ugly” and “The Mission.”

Members of the Cultural Society of Friends of Ennio Morricone Music in Greece screen his films and broadcast his concerts live on screens at archaeological sites.

In the latest sign of their appreciation, they have commissioned a mural of Morricone’s bespectacled profile on a five-story residential block, about 1,000 kilometers (620 miles) away from his birthplace in Rome.

“It is very visible, we wanted a clear illustration of him, so it could always remain here in our town, magnificent, like him and his large body of work,” said the cultural society’s president, Konstantinos Papakostas.

Papakostas set up the Cultural Society of Friends of Ennio Morricone Music in 2010 after seeing the Oscar-winning composer perform live in the Italian capital, then in Assago, on the outskirts of Milan.

He spread the word in Larissa and has since persuaded 1,080 fellow townspeople to sign up as members.

“I am completely in awe of him and his music,” Papakostas said.

Morricone, who turns 90 this year, is still composing music and has a series of performances lined up as part of “The 60 Years in Music” tour.

Kids become archaeologists for a day at Ancient Corinth