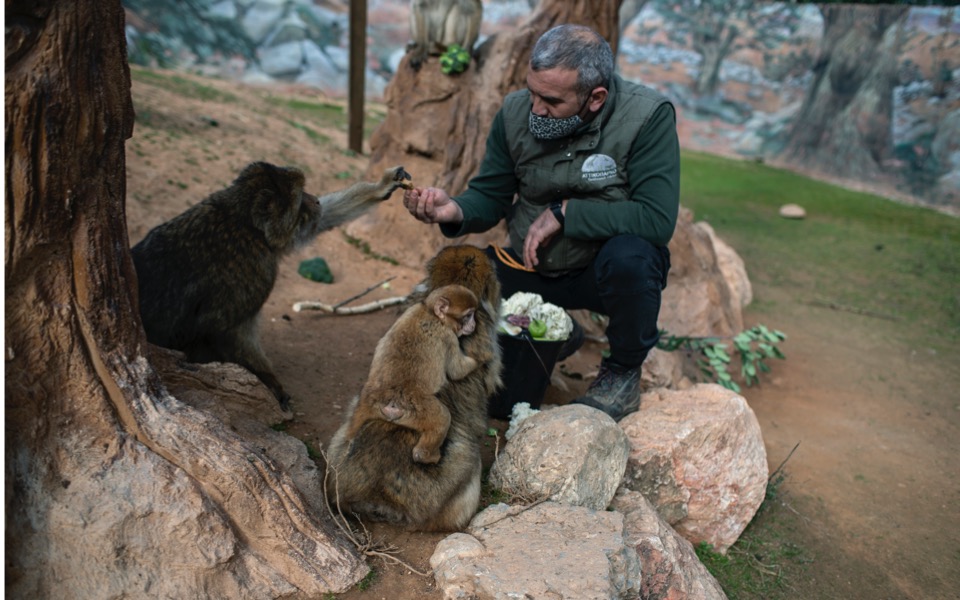 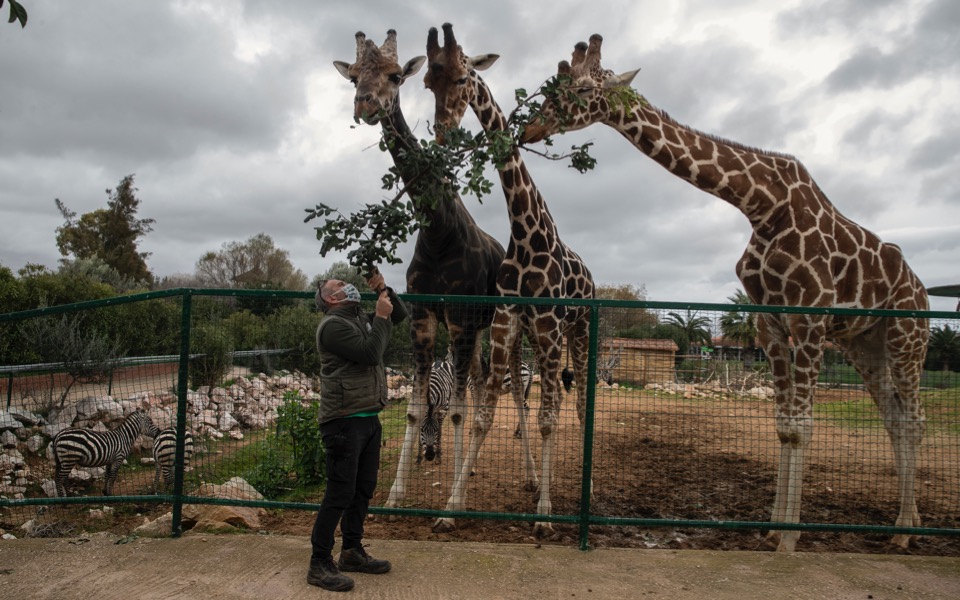 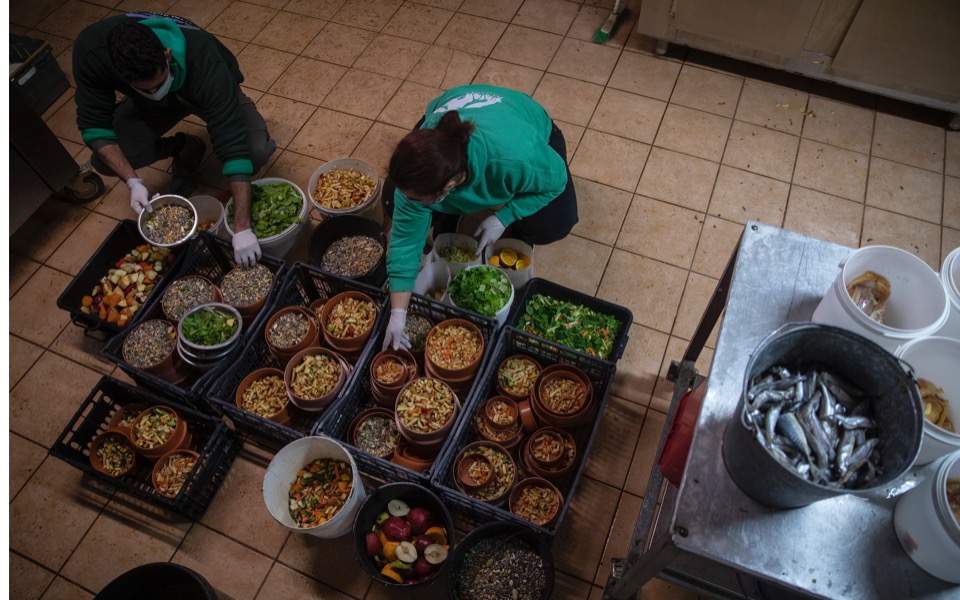 Zoo keepers Alexis left and Christina prepare food for the animals in the Attica Zoological Park in Spata, near Athens, on Tuesday, Jan. 26, 2021. [Petros Giannakouris/AP] 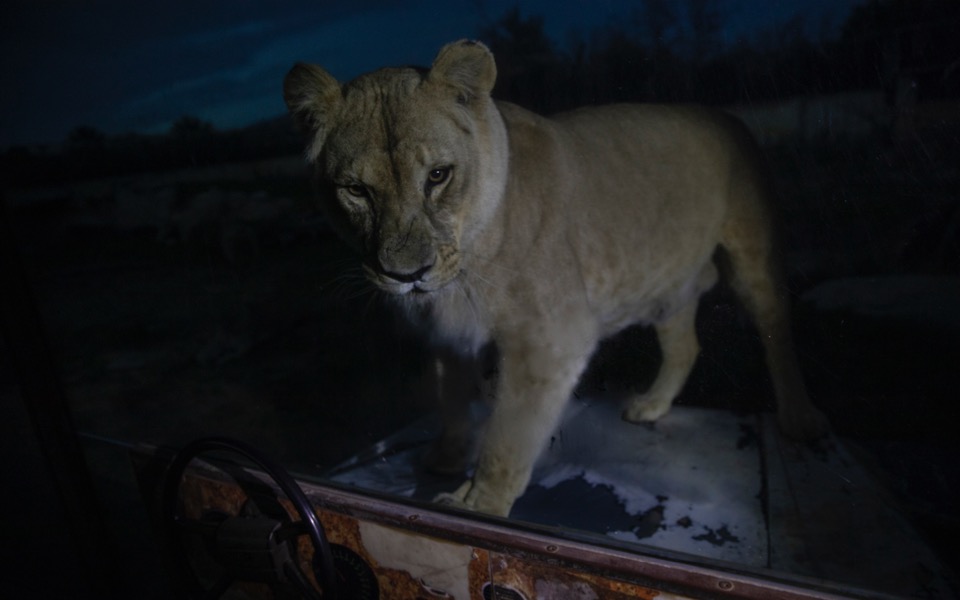 An Angola lion looks on as it stands behind a glass wall in Attica Zoological Park in Spata, near Athens, on Thursday, Jan. 21, 2021. [Petros Giannakouris/AP] 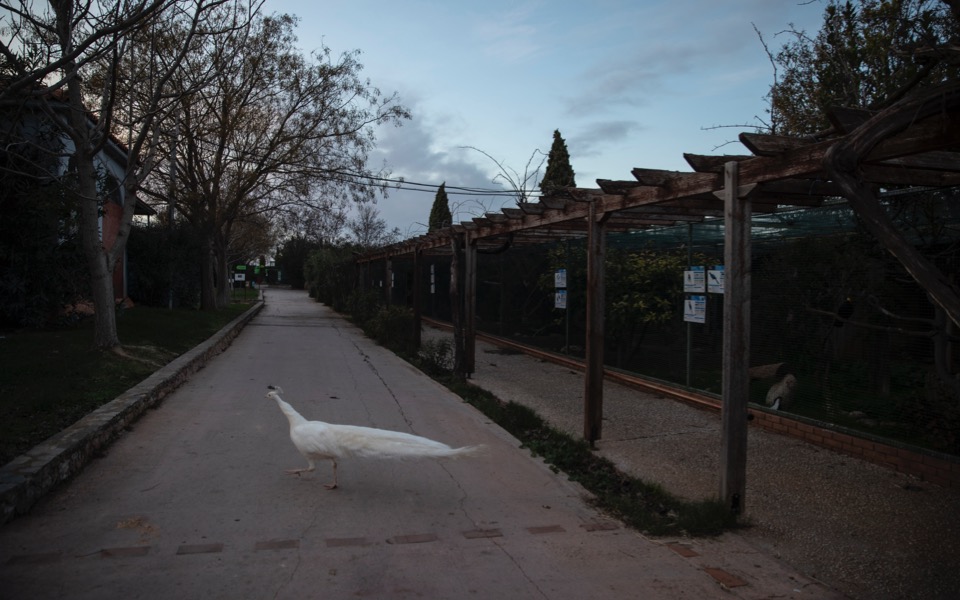 A white peacock walks across a pathway in the Attica Zoological Park in Spata, near Athens, on Thursday, Jan. 21, 2021. [Petros Giannakouris/AP] 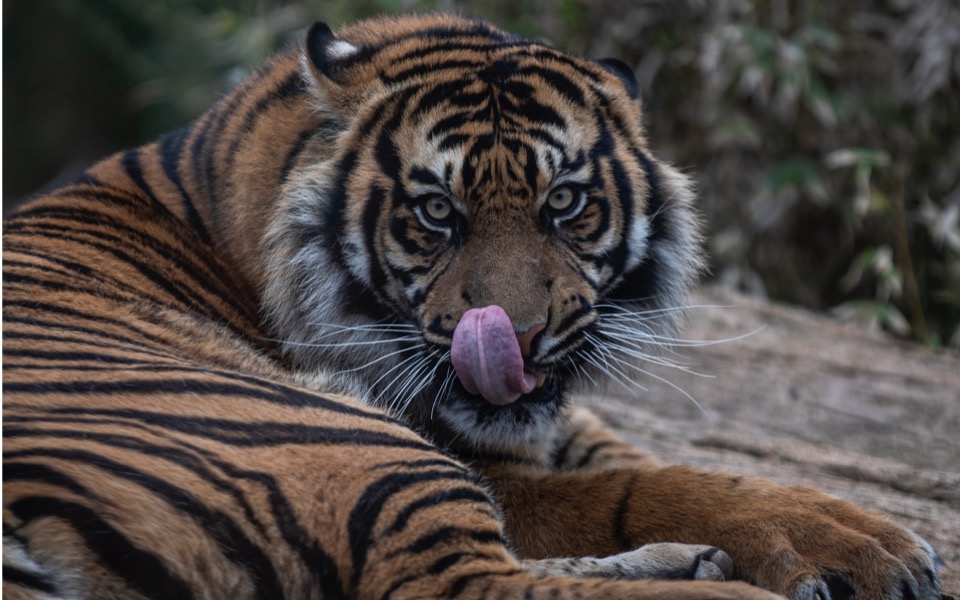 It's feeding time at Greece's only zoo, and a capuchin monkey grabs as many mandarins as it can – even tucking one into his long, supple tail. It might be wise to stock up.

After being closed for almost three months due to Covid-19, the zoo on the fringes of Athens could be on the road to extinction: With no paying visitors or – unlike other European zoos – enough government aid to cover its very particular needs, the Attica Zoological Park faces huge bills to keep 2,000 animals well-fed and healthy.

"As things are … we still can go on for at least one month," zoo founder and CEO Jean Jacques Lesueur said. "After that, we don't know."

Unlike some businesses forced to temporarily close due to virus-control restrictions, the zoo continues to have sizeable operating expenses. Between food, salaries, utilities, medical care and other expenses, the cost of caring for the animals currently exceeds 200,000 euros ($243,000) per month.

"That's the difference between us and other companies: When they close they close. We close, but we don't close," Lesueur told The Associated Press.

Founded in 2000 and located in the town of Spata, the zoo occupies 20 hectares (50 acres) and is home to 290 species, from elephants to prairie dogs. It's involved in education, conservation and breeding, and belongs to the European Association of Zoos and Aquaria, which has about 400 members.

Having to close again on Nov. 7 after Greece's two-month spring lockdown came at a bad time for Attica Zoological Park. The zoo normally operates year-round but does a lot of its business during cooler weather "because in Greece people go to the beaches, to the islands, they don't visit zoos" in the summer, the French-born Lesueur said.

Visitors account for more than 99% of its revenue, from tickets, food and beverages and gift shop sales. So every month's revenue counts, and the loss of December, usually busy due to the Christmas holidays, was particularly heavy.

So far, suppliers have shown understanding and are accepting credit. Two-thirds of the zoo's staff is on state-supported furlough, and an expected installment of state aid will take care of this month's pay for the rest, the CEO said.

The zoo also has sold 5,000 advance tickets at reduced prices for when the lockdown ends, and Lesueur says that helped pay December's salaries.

Lockdown also affects the zoo's residents, accustomed as they are to crowds of humans. For nearly three months, they've only been seeing their keepers. So the tables were turned when an AP journalist visited last week: Several curious animals and birds came close for a good look.

"Animals miss visitors, because it's part of their life," Lesueur said. "All the animals you see (here) are born in other zoos. So they are used to people."

Greece has registered about 150,000 confirmed Covid-19 infections so far and some 5,800 deaths in the pandemic. After peaking above 3,300 in November, the number of new daily cases is holding in the triple digits.

Nevertheless, the greater Athens region remains the country's worst-hit area and authorities said Friday they will reimpose tougher lockdown restrictions there after a January decline in infection rates was reversed this week.

Overall, Lesueur says he's optimistic that the zoo will get clearance to reopen in coming weeks.

"Except if the Covid [situation] gets worse. That's another story," he said. "Now if we are closed for another two months or three months, I really don't know what is going to happen."

Slow tourism season a boon for endangered turtles on Zakynthos

Young bear returned to shelter after locals start feeding it