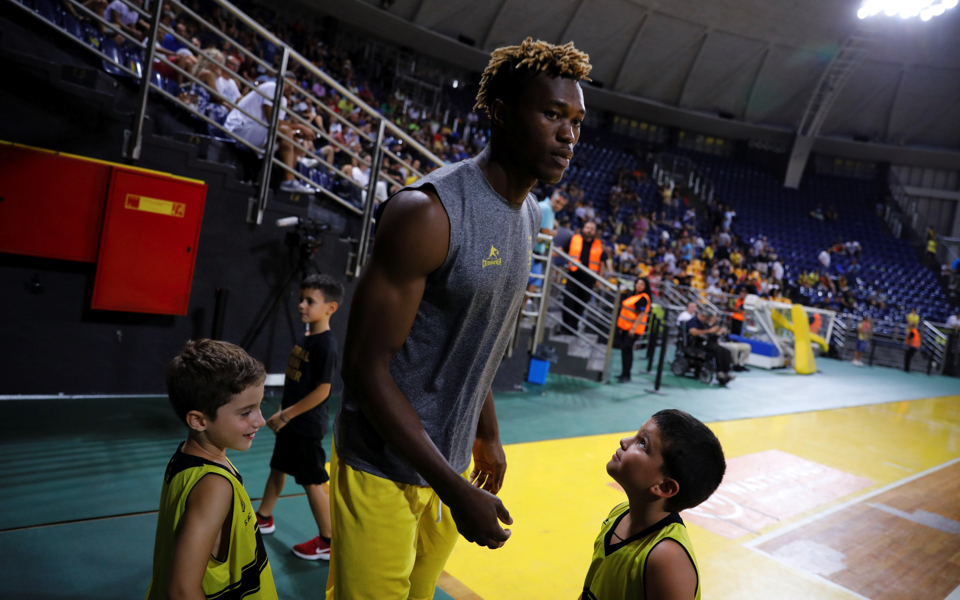 Congolese basketball player Christ Wamba enters the court after halftime during a friendly game between Aris Thessaloniki BC and Istanbul BB at the Alexandreio Melathron Nick Galis Hall in Thessaloniki, September 12. 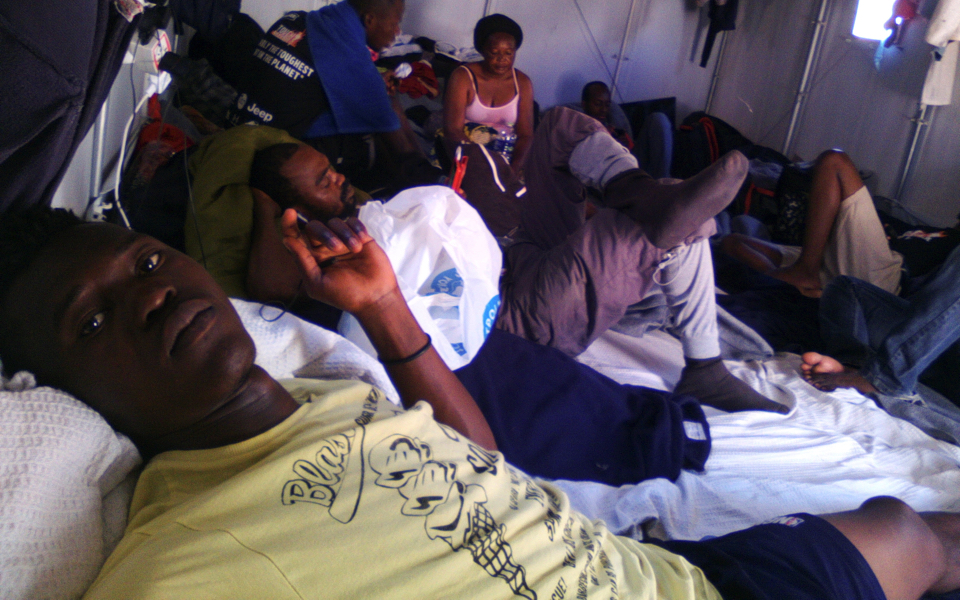 He fled hardship and unrest in Congo Republic with nothing but his ball and a change of clothes. Now, not yet 18, Christ Wamba is training with a professional basketball club in Europe.

Taking a well-trodden route north out of sub-Saharan Africa, Wamba clung on to his treasured ball until he had to jettison it on the sea crossing from Turkey to Greece. He is now under the wing of one the country’s biggest clubs, Aris, as he waits for his asylum application to be processed.

“I didn’t have shoes to play basket,” Wamba, a towering figure with boyish looks and bleached hair, said of life in Congo, a nation rife with poverty despite its oil wealth.

“I played with flip-flops. Sometimes with nothing, without shoes, with only my legs, with blood sometimes,” he said, cradling a ball between legs that are almost too long for the bed in the room provided by a UN refugee agency scheme.

When Wamba, 17, arrived in Greece in March 2016, his prospects, like thousands of asylum-seekers languishing on Greece’s islands, were dim.

Then technology changed his luck.

After months on Lesvos, he created a profile on Athlenda, a start-up described by its founder Lazaros Papadopoulos, a former Greece national team player, as “LinkedIn for athletes,” bringing together players, coaches, clubs and scouts.

He was quickly spotted by Aris, the Thessaloniki-based team of Greek basketball great Nick Galis, a Hall of Famer.

“I liked him from the first moment because I saw his passion. And when I see talent, a kid trying to do whatever it takes to play, I couldn’t not be moved,” said Papadopoulos, who mentors Wamba. “He’s got all the specs to succeed.”

In Africa, where soccer is king, Wamba was too tall to play.

He bought his first basketball with food money and taught himself by watching NBA videos and trying to emulate his idols, Kevin Durant and Kobe Bryant.

He fled in 2015 when protests and violence broke out in the capital Brazzaville over a contested referendum by long-serving President Denis Sassou Nguesso to lift limits to his term.

He was jailed for days and feared for his safety, he said.

Wamba travelled to Turkey, where he spent months scrabbling together the money to pay a smuggler for the treacherous dinghy journey to Greece.

“It was night. We didn’t know the way. We spent four hours in the sea … The water was so cold in March. You can’t move.

If you move people [say] ‘hey, you want people to die?’” Eventually, they were rescued by the Greek coast guard.

Wearing a puffer jacket, a track suit and a beanie hat, Wamba was taken to Greece’s biggest migrant camp, Moria, according to Reuters journalists who saw him arrive.

There, he skipped meals to practice for seven hours a day. Often, he ran some 20 km to find a basketball court, he said.

“He’s very cooperative, he’s a great kid and he deserves this opportunity. We’re happy to have him,” Aris coach Vangelis Angelou said. The team is even considering taking him on as a foreign player, he said.

Back in his tiny room, Wamba dreams of joining the NBA one day.

“I try to be the best. Maybe one day in the future they will talk also about me,” he said.

Greece seals ticket to China with win in Georgia

Greek hoopsters beat Serbia and get closer to the finals

Greek hoopsters not up to the task yet

Greece strolls into second qualifying round of FIBA World Cup