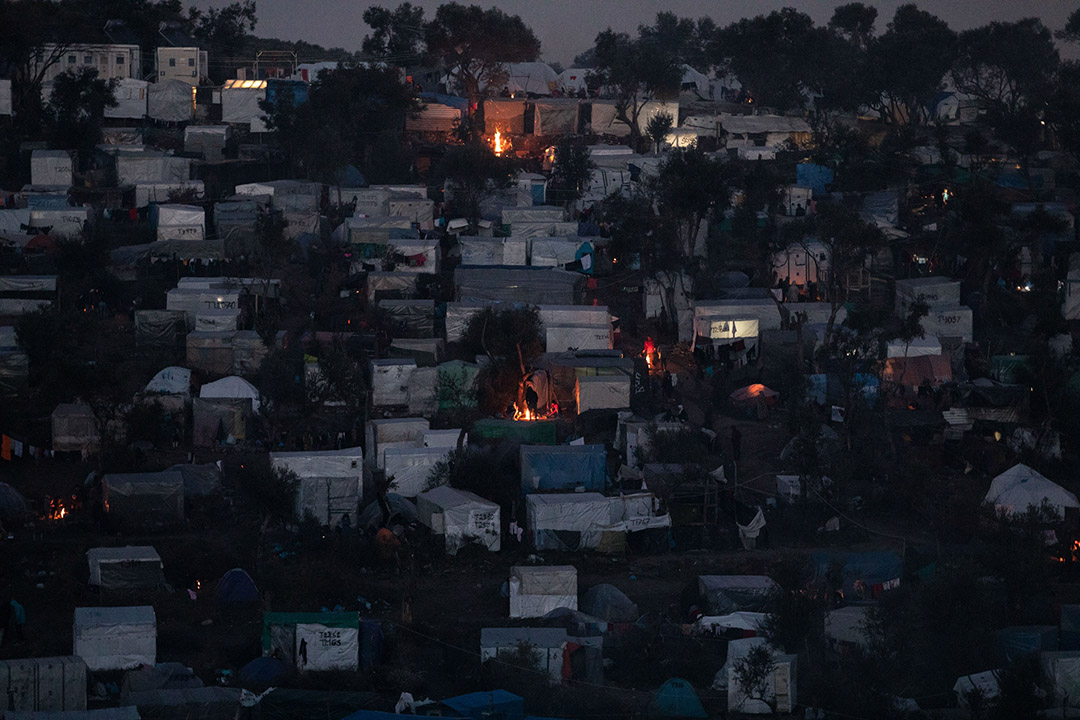 Stratis Valamios, a 43-year-old fisherman, well understands the hazards of the sea. “It can switch from perfectly still to a storm just like that,” he says. He has transported many migrants to shore in the Irene-Mihaela, his 4.5-meter dinghy, but he has also counted many bodies.

There was a south wind blowing in Skala, Sykamia village’s harbor, which means that the waves were directed toward the shores of Turkey, visible across the sea. Maybe the weather explained the odd fact that there had been no new migrant arrivals on the eastern Aegean island of Lesvos for two whole days. The islanders were watching as events unfolded on the land border in the northeast – where Turkey is using false promises to lure thousands of migrants and refugees to the Greek frontier – hoping that they would not have to relive the days of 2015.

“They threw their babies to me as their boat went down. They flailed against my boat when they fell into the water. They were between just a few months to 10 years old. I dropped them off at Skala and everyone in the village was there to look after them as I went back for their parents, not knowing if they’d drowned,” says Valiamos, remembering one of his more harrowing rescues. The residents of the east Aegean island were nominated for a Nobel Peace Prize for their response to the refugee and migrant crisis when it first erupted five years ago.

Valiamos had nightmares about such scenes, but now he’s just angry. “No one cares. Not for us or for them,” he says. “They were chased away from their homes, their money was taken by Turkish smugglers and when they get here no one wants them. And we have to shoulder this burden without having created it.”

Lesvos, an island of roughly 86,000 residents (according to the 2011 census), has lived with a population of thousands of trapped migrants and refugees for five years now. At the last count, this figure came to 21,815 and the past few weeks have seen an unprecedented spike in tensions. There have been attacks on Greek and foreign journalists, roadblocks set up by citizens to check the activities of nongovernmental organizations, a migrant boat prevented from landing at Thermi by angry locals hurling abuse, and a fire at a short-term hospitality facility that is believed to be arson.

What happened to reverse the mood on the island? Kathimerini traveled to Lesvos to find out.

Many locals talk about an island that is divided between north and south, not just administratively between two municipal authorities or because of any sense of rivalry. Very simply, each side feels that it’s got the short end of the stick. One hotelier on the northern side, who spoke on the condition of anonymity fearing reactions from his fellow islanders, believes that the area around the capital, Mytilene, in the south has benefited more from the situation. Never having relied completely on tourism and equipped with all the island’s basic services (a hospital, police force, the main port etc), “it experienced an economic boom” as a result of the migration crisis, he says.

“Its hotels were suddenly full of members of Frontex and NGOs,” he says, referring to the European Union’s border agency and nongovernmental organizations active on the island since 2015. It was a different story in the north as charter flights dwindled after 2016 and the hotelier’s own turnover nosedived so that he has been left today with a staff of five, when he used to employ 19. The south, though, has also been saddled with the notorious Moria migrant camp and thousands of people who live in dire conditions. But the north, he says, has felt the economic impact much more acutely.

This division appears to have also been stoked during the local elections in May 2019. One former municipal councilor explains that some of the candidates ran on promises of “clearing up the migrant crisis,” generating impossible expectations. Then came the new government’s plan for building a closed center on the island, and debate regarding where it would be located sparked more reactions. No one wants what the locals say will be a “new prison” in their backyard.

“I lost all faith in the state in 2015. It killed me. We were completely alone,” says a businessman. “Now we’ve reached the point of having riot police sent here to supervise the expropriation of land and having to watch television presenters referring to us in sarcastic and disparaging tones. The government should have moved ahead with transfers first and then with a new camp. It should have made a gesture to earn our trust.”

NGOs have also come under fire even though they have stepped into a void left by the state and their presence on the island is much more discreet that it was in the early years of the migration crisis. In early 2016, the Municipality of Mytilene had recorded 84 organizations and volunteer groups. Their representatives would meet every Thursday morning under the United Nations Refugee Agency (UNHCR) to coordinate their activities and assign roles. Admittedly, there were incidents of organizations overstepping their purview or making questionable contributions to the situation.

Following the activation of the agreement between the European Union and Turkey in March 2016, inflows dropped significantly and most of the NGOs gradually left the island. UNHCR representative Boris Cheshirkov told Kathimerini that there are now around 20 organizations active on the island and the weekly meetings have become monthly. Most of these groups are funded by private donors.

There have been several incidents in recent weeks when locals have shown members of these groups that they are no longer welcome on the island, occasionally even involving violence. They have set up several makeshift roadblocks on central thoroughfares to intercept NGO members in their cars, which they smashed with bats and rocks. Car rental companies at the airport even recommend that foreign motorists remove the rental stickers from their vehicles.

My colleague @FranziEire and me just got attacked on the Island of #Lesvos driving with the car along the coast of #Moria. A group of masked and black-wearing men with sticks and stones threw stones on our car - we had to drive very fast to escape. We are safe. #refugeesgr pic.twitter.com/2C2Fu8zxRw

One group of locals also stopped our car when we were on Lesvos last week on the way to Moria. They weren’t aggressive, but they did scrutinize us with some suspicion. “Where are you headed? Are you local? Speak clearly so they don’t think you’re with an NGO,” one of the men advised before the others allowed us to go on our way. Things may have been very different if we had been from an NGO.

Patrols along the sea border off the coast of Lesvos are now being conducted 24 hours a day. “We have been given orders to step up security. What does this mean? If you see a boat coming, you get in its way and use verbal signals to ask it to stop. We don’t have orders to sink boats. I couldn’t live with something like that,” said a Lesvos-based coast guard officer who asked not to be named. He did not want to comment on a video leaked by Turkey ostensibly showing a Greek crew violently pushing away a loaded migrant boat, but he did say that nothing like that has happened on the crossing to Lesvos.

The coast guard officer explains how easy it is for things to go terribly wrong at sea, how an overloaded boat can capsize in an instant, throwing everyone overboard. “There’s a piece of wood in the bow that moves very easily and can pierce the boat,” he says of the inflatable dinghies favored by migrant smugglers.

On March 2, a boy from Afrin in Syria drowned on the crossing to Lesvos from Turkey. A Hellenic Coast Guard officer tells Kathimerini that the boat the boy had been traveling in with his mother and others was damaged when the Greek vessel approached to save more passengers from drowning. The Turkish Coast Guard, meanwhile, no longer responds to calls from the Greek side and there are concerns about how cooperation between the two sides can be re-established.

According to Greece’s General Secretariat for Media and Communication, 518 migrants and refugees anded on Lesvos in March 1 and another 94 the following day. This was followed by a spell of zero arrivals before 42 people landed on the beach between Skala and Eftalou last Thursday. None will have the right to apply for asylum, as the process has been suspended as part of Greece’s recent emergency measures. Coast guard officers attribute the drop in arrivals to the weather or the fact that Turkey is focused on increasing the pressure on the land border at Evros. They also consider it likely that smugglers across the sea are gearing up for a mass landing.

When refugees from the Asia Minor disaster landed on Lesvos’ shores back in the early 1900s, they stayed in the storage sheds of the island’s oil mills. Last Thursday’s refugee boat was not met by an NGO that would arrange shelter for its passengers – which included several infants – so they spent the night in the courtyard of the Church of Agios Dimitrios, watched over by coast guard officers. Two UNHCR members brought them hot tea and sleeping bags, while tents were erected the following morning by the West Lesvos Municipality.

Conditions on the island have prompted changes to how new arrivals are handled. They are no longer sent to the woefully overcrowded Moria camp but are registered at the central police station in Mytilene and then put on a navy ship, the Rodos, which was dispatched to the island last Wednesday. Deportation orders are issued before they are transferred to facilities on the mainland.

Following talks with local agencies and police authorities, several NGOs that had suspended their operations over the recent tensions are now back in action on the island. They don’t have to deal with roadblocks anymore either. “The problem has been acknowledged and we received assurances that every possible effort would be made to avert similar incidents,” said Apostolos Veizis, the program supervisor of Doctors Without Borders, which runs two health centers on the island.

But the mood has evidently changed. Just last Friday, a group of members of the far-right extremist Identitare Bewegung (Identitarian Movement) – whose leader, Austrian Martin Sellner, is currently under investigation for his links to Brenton Tarrant, the Christchurch shooter who killed 51 people in two mosque attacks in the New Zealand city in March 2019 – landed on the island. The following night, a building used by the One Happy Family nongovernmental organization went up in flames. The fire service suspects arson, though the two incidents have not been officially linked.

“The situation in the past month, after the arrival of the riot police, has been tense. The people are tired and this has buoyed the far-right,” says Valiamos. “I don’t think that the locals, even those who are opposed to the migrants, would refuse to help if a boat got into trouble right in front of them. They’re just saying things they haven’t really thought about. Maybe it’s desperation. Maybe it’s that no one’s paying attention to us, the feeling that we’re being used.”