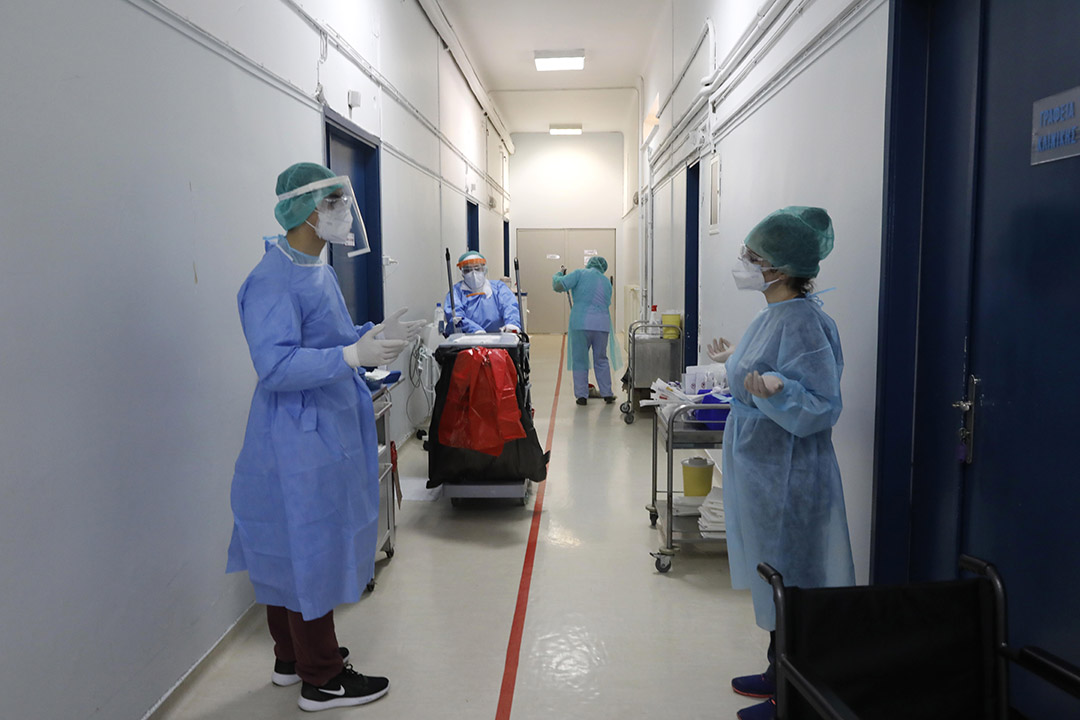 The border is marked by a red line running down the middle of the hallway floor. The left-hand side is the “orange zone,” where medical staff get into their protective gear. The other side is the “red zone” and leads into the patients’ rooms. Doctors entering here – protected by shoe and head covers, gloves, hazmat suits and goggles – are never alone.

There’s one assistant ready to take blood sample vials out of the room and another doctor behind a gray door in the sterilized “green zone” waiting to help should the need arise. Treating patients on the front line of the coronavirus pandemic is a team effort.

Athens’ Sotiria Hospital has a clinic dedicated exclusively to Covid-19 patients in a remote corner of the Third Pathology Department’s Center for Respiratory Deficiencies. Located in a lush woodland setting, with broad balconies and lofty ceilings, the center was established at the beginning of the 20th century as a tuberculosis sanatorium. The clinic was set up a few weeks ago following modifications to the building and special training for the 20 doctors and 30 nurses that staff it.

Kathimerini visited the hospital in the northern Athenian suburb of Holargos for a glimpse into what goes on during a shift at the Covid-19 clinic.

“No two days are the same,” says Kostas Syrigos, a professor and director at Sotiria’s Third Pathology Department, which runs the Covid-19 clinic.

Its doctors meet every morning in a ward in the green zone that has been transformed into a lounge where they can keep a safe distance from one another. They talk about the condition of their patients, what happened during the night shift and the results of any tests they have and note down any issues that need to be addressed.

“A patient may have questioned the results of the test and demanded to be released or retested. The ‘why me’ syndrome and guilt are part and parcel of the process, and this is something we need to manage. It’s a relationship of trust,” says Syrigos.

Pathology professor Giorgos Stergiou is responsible for researching the bibliography and sharing any new findings and information from papers and studies on the coronavirus with his colleagues at the clinic through a digital group they have formed. Covid-19 is a new enemy and there’s a constant stream of new information on how to treat it.

“I had a patient who appeared stable, but his blood gas indicated that he had to intubated,” says resident Yiannis Trontzas. “You may have someone who has no trouble breathing and isn’t gasping coming up much sicker from the tests. We are dealing with something new. It doesn’t give you the signs you know from experience and expertise. It doesn’t present as a typical respiratory disease. It’s tricky.”

Anyone stepping into the red zone is covered head to foot and may have to spend up to four hours in this gear. “The equipment can become very oppressive. It makes you sweat and your goggles fog up. Staff cannot spend much longer in this uniform,” says Garyfallia Poulakou, a pathologist and epidemiologist.

“You wear two or three pairs of gloves so you have no real sense of touch and it’s hard to hear the patients’ lungs through the suits, but the main problem is that you don’t have that direct connection with them. They can’t see your face and you can’t touch them to comfort them,” says Trontzas.

The staff are trained in the use of personal protective equipment (PPE) by Katerina Iliopoulou, a retired military officer with emergency medicine experience who has volunteered her time to the effort. Everyone in the clinic, from the doctors and nurses to the cleaning staff, has been drilled again and again in groups of three on how to use the PPE and limit the possibility of mistakes and oversights. Dressing and undressing can take up to 10 minutes and it is a process that has to be carried out in front of a full-length mirror to ensure that every step is followed faithfully.

The situation at Sotiria’s Covid-19 clinic appears manageable so far. “We are not experiencing a situation like Italy; we have the luxury of time,” says Trontzas. This was not the case a couple of weeks earlier when the department was handling more cases. “It was hell and I don’t think we would have managed for much longer,” says Syrigos.

The doctors at the clinic were relieved from their regular duties and the department now only treats its chronic patients, and that in different parts of the hospitals.

The Covid-19 clinic only receives patients with confirmed coronavirus and they come in through a separate entrance to that used by staff. The wards that used to accommodate five beds now hold three so that there’s a distance of at least 2 meters between patients, while the green zone is separated from the orange and red zones by a big door.

“If a patient complains about something, we can assess the situation visually before a doctor goes through the process of having to get suited up to respond. This is also a way to save the PPE,” says Syrigos.

The clinic recently received a donation of GoPro cameras that doctors can wear on their foreheads when they’re treating difficult cases, transmitting the image to the doctor’s lounge, where colleagues can offer support and advice.

The doctors pull shifts of 18 or 24 hours every three days. At the same time, they receive significant help from 56 medical students and former interns, including Syrigos’ own son. “They give us systematic support from the green zone,” says the clinic’s director.

The team is also supplied with plastic face shields from the National Technical University of Athens, while the University of Volos and nongovernmental organization Medecins Sans Frontieres have donated PPE. Donations further ensure that on-call staff get regular meals and have fridges and freezers to store supplies.

Reaching potential donors and suppliers “is a day-to-day battle but I have not heard one person say ‘no’ or ‘I can’t,’” says Syrigos, adding that this response is also important for boosting morale. “It gives the staff a sense of recognition, that people outside of here understand that we’re doing something important.”

At the end of each shift, the staff send their scrubs and any other items worn on the wards to a special laundry and press that has also volunteered its services.

When they get home, they each have their own system for ensuring that they’re not carrying any viral stowaways. Syrigos sprays his shoes with a bleach solution, changes into fresh clothes in his garage and washes any clothes worn at the hospital separately.

Trontzas carries a fresh change of clothes in the trunk of his car and sleeps in the living room of his house after turning his bedroom into an area for storing his work clothes.

"I wanted to create a space where I could move freely and I wouldn't stress over what I've touched. You try to be careful as best as you can," he says.