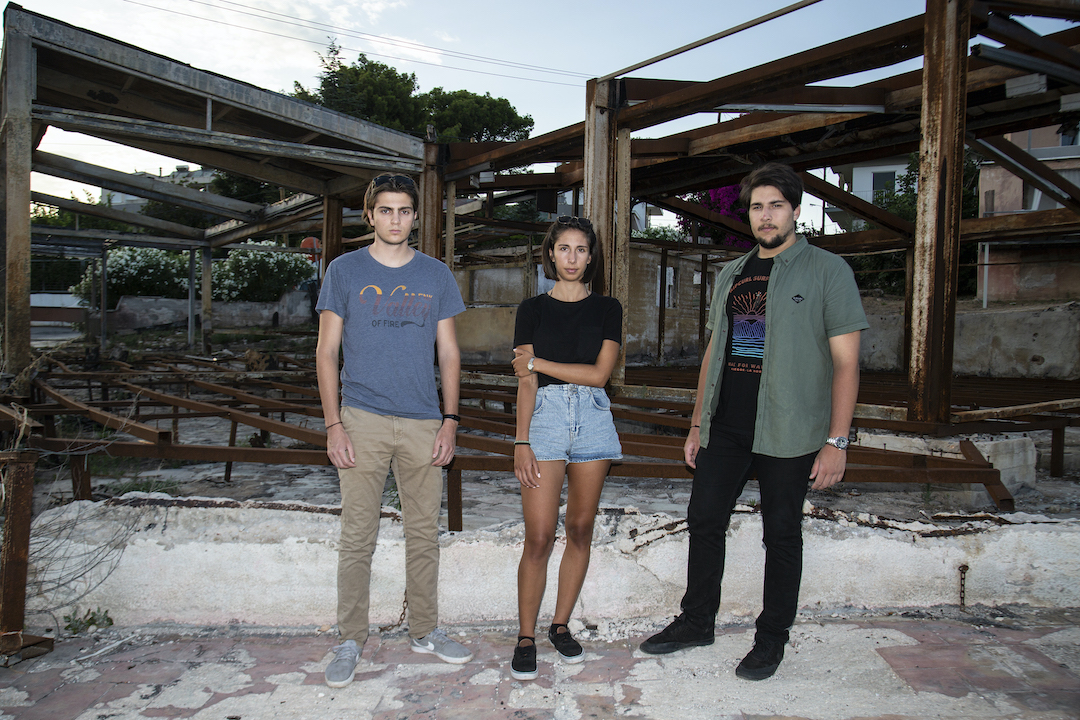 As July 23 nears, Aphrodite Hatzianastasiadi is starting to have the nightmare again of being chased by flames.

“We knew, on that day, that we weren’t safe anywhere,” says the 23-year-old. “It is terrifying to realize in this day and age that no one is protecting you, that the absence of a state we talk about sometimes ended up costing lives here.”

In the small eastern Attica towns of Mati and Neos Voutzas, only a few clumps of golden-yellow shrubs grow where pines once shaded homes, streets and beaches. Many of the damaged houses have been repaired and some are still under reconstruction, but others remain charred, a macabre reminder of the events of the summer of 2018.

With almost two years having passed since eastern Attica was ravaged by wildfires, Kathimerini went to Mati to meet with young survivors and discuss the psychological impact of the tragedy. Some describe an abrupt coming-of-age or an inability to talk about their feelings. Others express feelings of injustice and rage that continue to overwhelm them to this day. What they all agree on, however, is that they survived by pure luck. “It could have been us who were burned and others standing here today,” they say.

In the absence of any warnings or an evacuation plan from the authorities, every decision made in those few hours was a split-second coin toss.

Tzortis Hatzianastasiadis was 19 years old at the time. “It’s like a level in ‘Call of Duty’,” he remembers telling his sister. The scorched landscape was so alien, the experience so hostile and sudden, only a dystopian video game could compare. Three weeks after the fire he had told Kathimerini that he didn’t have “the luxury to cry.”

Tzortzis and a group of other young Mati residents assisted in search and rescue operations, looking for survivors in the small coves and beaches along the coast. “I decided that I needed to help however I could and not waste time being sad; that’s how I dealt with it,” he says today.

He remembers how he would draw on the emotional impact of some of the tougher scenes he had witnessed because he felt this gave him the push he needed to help others. “I would go home and look for the most brutal film I could find, movies about the end of the world, where everything was horrid, exactly like what I had seen in Mati. I did not do it consciously. At some point though, after I had watched almost all of them, I thought: ‘what am I doing?’”

For most of the survivors, it took weeks before they could fully process what had happened. “You don’t have time to feel sad,” says 23-year-old Danaos Kokkinos. “When you have escaped being burned alive in mere seconds, when you have lived through chaos, the thought that you might not have a house registers quite cooly in the moment.”

Before the death count was even finalized, while the search for survivors was still ongoing, many Mati youngsters threw themselves into the relief effort, doing things they had never done before. They organized food donations, participated in threes and fours – under the supervision of older group leaders – in night patrols amid fears of looting and delivered food to people who were too ashamed to seek help on their own.

Their contribution, however, did not stop there. On their own initiative, they cleaned ashes and debris from streets and beaches. While the death toll was still at 99 – the official final number eventually came to 102 – they repaired the sign that greets visitors entering Mati on Poseidonos Avenue, adding 99 palm prints in homage to the victims.

“They turned their grief into energy,” says Katerina Mala, Aphrodite and Tzortzis’ mother. “The youngsters led the way and we, the older adults, followed. Watching them doing their thing made us feel obliged to move forward,” she says.

“We were dealing with our own rage, our own regrets, a house that was destroyed, desperation over the destruction of the town, and our youngsters mothered us, helped us get through it,” adds Eva Anagnostou, a mother of two.

Dione Tupay is 18 years old today. Writing helped her grapple with the ordeal, to a degree. “I wrote a few poems about the fire and discovered that quite a few people had done the same,” she says. She has pulled some of this material together and now aims to have it published.

Along with other local youngsters, she also took part in initiatives in support of wildfire victims in the US state of California and in Australia. They created photographic projects to send a simple message: “We feel you.”

Even today, two years on, the survivors of the Mati fire who spoke with Kathimerini believe that anyone who wasn’t there cannot really understand what they went through. “You can’t talk to someone who hasn’t been in a situation where they have to save themselves in a split second,” says Danaos Kokkinos.

The morning after the fire, on July 24, 2018, several nongovernmental organizations dispatched teams of mental health professionals and volunteers to Mati and nearby Kokkino Limanaki to provide psychological first aid. Their goal was to actively listen to the survivors and help them cope with post-traumatic stress. The affected areas were also divided into operation zones to ensure that help from all the different agencies and organizations was reaching those who needed it, while the relief effort was coordinated in regular briefings supervised by the Labor Ministry’s National Center for Social Solidarity (EKKA).

Speaking to Kathimerini at the time, psychologists who had walked the neighborhoods going door-to-door looking for people who needed their help explained that people who have been directly exposed to scenes of destruction will not necessarily develop post-traumatic stress disorder (PTSD). In one of those field operations, members of the mental health team of Medecins du Monde (Doctors of the World), discovered an elderly woman with mobility problems in Mati who had gone undetected for six days, without any medical or psychological assistance, in a house that had sustained extensive damage.

After fulfilling their duties in the weeks and months that followed, the volunteers and NGOs left the area. The first state-run psychological support facility for the residents of the affected areas opened in April 2019, following an agreement signed between the Attica Regional Development Fund and EKKA. The center has provided support to 154 individuals in more than 500 sessions in the year since May 2019.

“What we provide is short-term treatment. We are trying to help people with the smallest number of sessions possible, helping them address the immediate problems they face in the day-to-day,” Kimon Kalamaras, a psychologist-psychotherapist at the center, tells Kathimerini. “Usually we can see some progress after five or six sessions, but we also have people that have been visiting for a year; it all depends on the individual’s needs.”

The center organized two public information events on stress and anxiety at local schools and societies and held eight seminars on fear management for parents. The initiative is jointly financed by the European Social Fund and the National Strategic Reference Framework (ESPA) Attica 2015-2020. It was originally set up to operate for 18 months, though officials at the Attica Regional Authority would like it to continue for as long as necessary.

“Each anniversary brings back the trauma, but at the same time it can also provide catharsis. It is possible that some, not everyone, might suffer from nightmares or sleep disorders during this period. It is normal and understandable,” says Melina Doukakou, a doctor of clinical psychology and deputy director of the EKKA crisis management center.

“Anniversaries are a part of the grief process and provide relief. We recommend that people who are in pain should take part. Crying is an emotional reaction that is as necessary as laughter,” says Kalamaras.

Aphrodite Hatzianastasiadi is one of the young people who will attend the July 23 anniversary event. “Months after the fire, an impenetrable wall went up. I would very much like to feel the liberation of reliving the incident, of crying and venting, but it has not happened yet. It’s been two years and it’s still not happened,” she says.

Anger is all she’s got left. She and others in her age group who spoke to Kathimerini cannot accept that so soon after the event there was an attempt to deflect the blame onto the residents and the anarchic town plan so that the public discussion would move away from the responsibilities of the state.

“You redirect the blame elsewhere to disguise what really happened. This cannot go on, though,” says 21-year-old Asimakis Zaimis. “This is what drives me crazy in this country. You go through a tragedy like this and instead of receiving help you are lumped with more guilt. ‘It’s your fault,’ they tell you. That burden will never go away,” says Dione.

“For the rest of the world the fire is history. For us, however, it’s still burning, it still smells,” says Aphrodite. “It’s hard to walk through some streets knowing that that is where your friends died.”