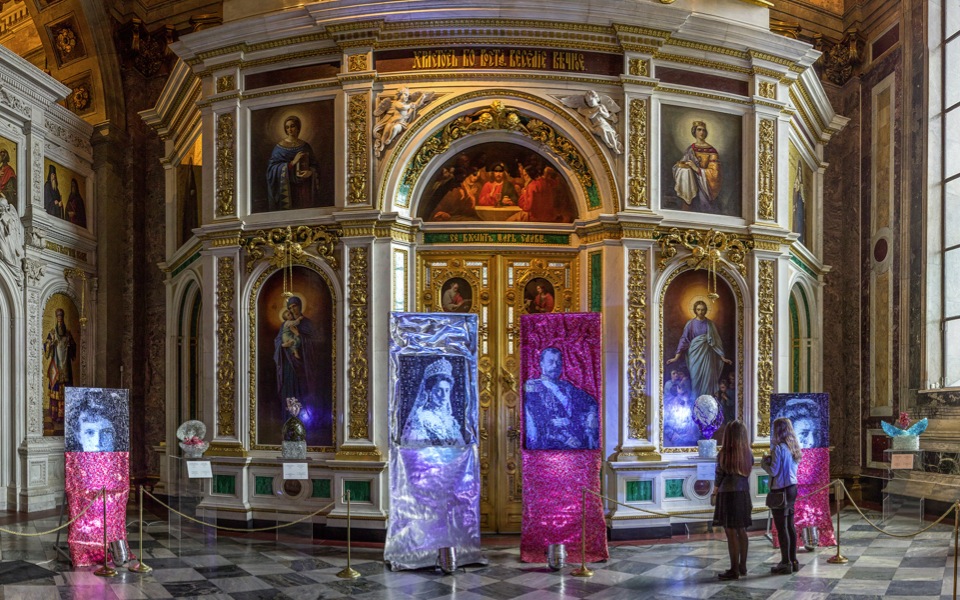 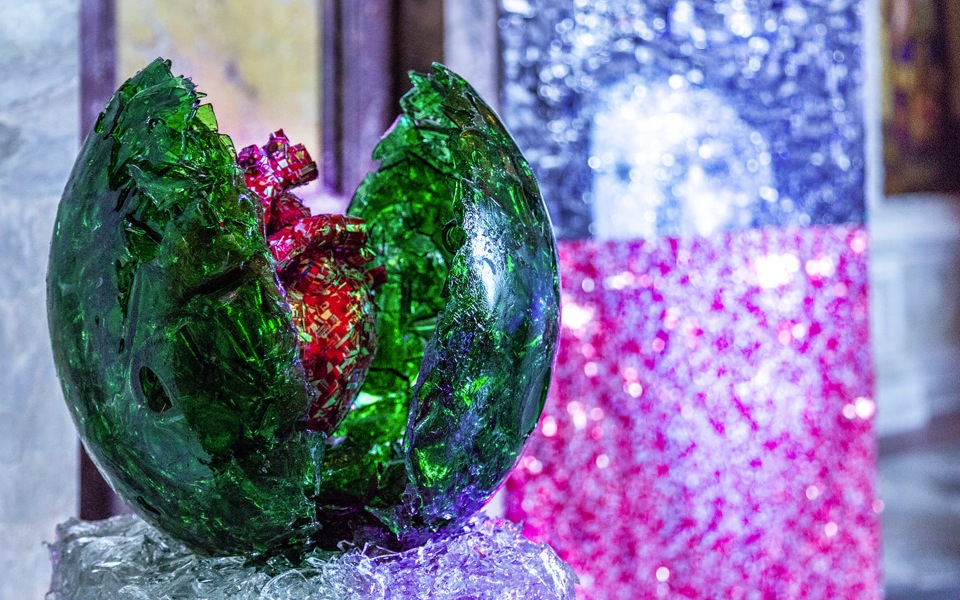 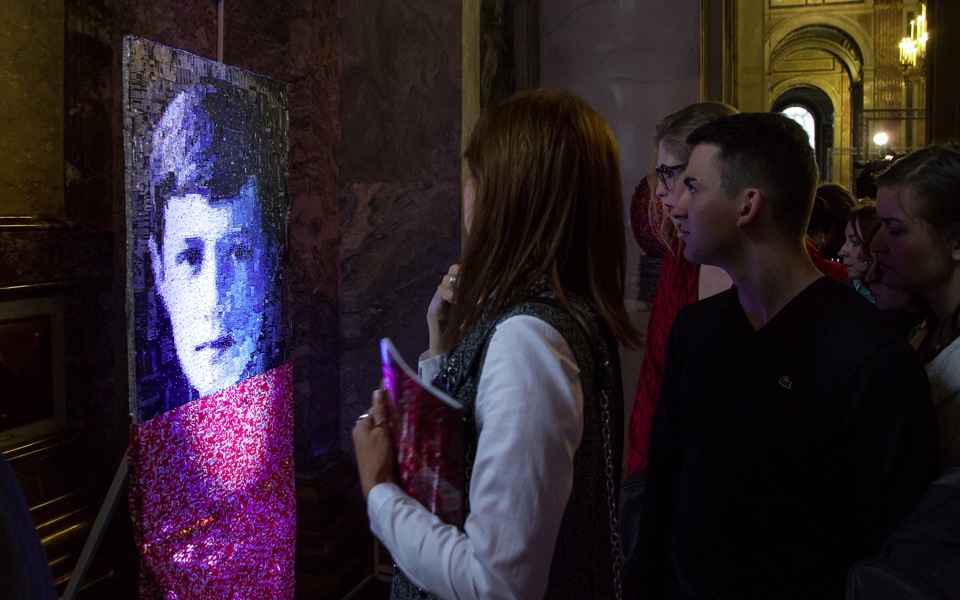 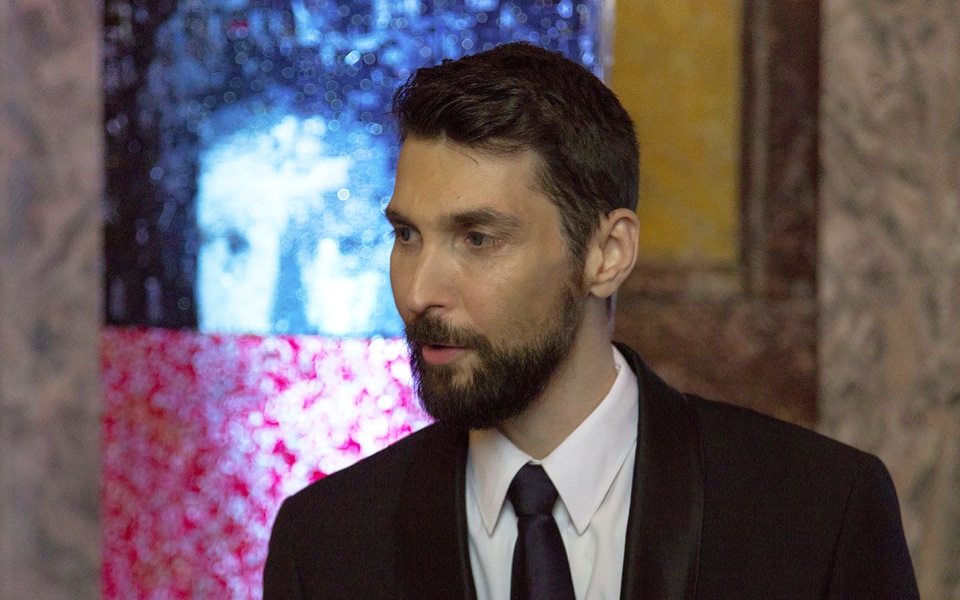 Commissioned by the Russian state within the framework of the 2016 Year of Greece in Russia, the display focuses on the country’s last imperial family, the Romanovs.

“The proposal points to Russia revisiting the idea of its ‘Imperial’ tradition, with the country reaching out to its Orthodox and Byzantine roots,” Floros told Kathimerini English Edition. “Besides, it was during the rule of Tsar Nicholas II that Russian literature, art and culture reached their peak.”

At the same time, the House of Romanov mirrored an old system that failed to keep up with the rapidly changing times. At St Isaac’s, the Greek artist brings his own “instinct and sense of responsibility” to a bloody chapter of history through seven mosaic portraits: There’s the majestic – and colorful – Tsar Nicholas II in full military attire, flanked by black-and-white metallic portrayals of his spouse, Tsarina Alexandra Feodorovna, their daughters Olga, Tatiana, Anastasia and Maria and their son and would-be heir, hemophilic Alexei.

“The works are based on a few of the family’s last official photographs, with a focus on details which, at times, seem to predict the tragic end. Their eyes are filled with sadness,” noted the 46-year-old Floros.

The Romanov faces emerged through the artist’s signature technique, mosaics comprising large numbers of minute pieces of aluminum from soft drink cans – a method he patented in 2003. The creative idea was founded on the notion of recycling as well as a sense of the ephemeral which permeates the present era.

Executed in a series of limited editions by Peter Carl Faberge (1846-1920), a Russian of French descent, the original jeweled pieces were known to be the imperial family’s favorite Easter presents. Instead of using gold and precious stones, however, Floros worked with broken glass.

“My aim was to express the tsars’ fragile lives and use the sculptures as vehicles containing their ‘hearts,’ made of red aluminum fibers. Even though they were murdered, their hearts remained intact,” said Floros, adding a metaphysical dimension to the display, which steers clear from hagiography or religious art.

“Following his work on sculptured paintings, the Faberge-style eggs point to a new direction in terms of Floros’s creative style,” noted Aristotelis Karantis, who has been curating the artist’s shows in the last four years.

Greece’s consul general in Saint Petersburg, Panos Beglitis, acclaimed Russian actor and current State Museum St Isaac’s Cathedral director Nikolai Burov, and Deputy Regional Governor of the Peloponnese Constantina Nikolakou were among a group of dignitaries attending the exhibition’s inauguration earlier this month. On the day, a short film screened on a video wall inside the museum showed a Coca-Cola can turn into a key raw material on the artist’s canvas, while original footage showed the Romanovs in more carefree times.

Meanwhile, the show promotes the idea of cultural diplomacy which Floros has been nurturing in the last few years. Following a display of works inspired by El Greco at St Isaac’s two years ago, “Imperial Russia” signals his fourth exhibition at state museums in the culture-loving country. It is estimated that over 5 million visitors viewed his sculptures of costumes inspired by Maria Callas and Grace Kelly at Moscow’s Tsaritsyno in 2013, for instance. Julia Sysalova, Floros’s exhibitions director, has been a steady ally all along.

“As a Russian, I’m very proud to collaborate with an artist who chose to create a collection devoted to my country and its history in the frame of the Greek-Russian cross year,” she said.

How do young Russians view the Romanovs today?

“There is a sense of injustice and a feeling of sadness vis-a-vis the family, the children who were killed,” observed Natalia and Vadim, a Russian couple, after visiting the temporary display which they defined as “impressive.”

In the former imperial, revolutionary and presently federal city – as well as President Vladimir Putin’s birthplace – the Greek artist’s metal and glass works are being exhibited under the aegis of the Russian Orthodox Church and will remain on display through August 31. “Our shared spiritual heritage, Orthodoxy, gives special weight to Greek-Russian relations,” noted Floros.

One year prior to the centennial anniversary of the October Revolution, the Russian Church is about to take control, once again, of the cathedral – a museum of atheism during Soviet rule. As a result, “Imperial Russia” is billed as the last visual arts event St Isaac’s will host in its capacity as a museum.

Giving a voice to the voiceless

Homage to female artists at the Frissiras Museum

National Printing House opens its doors to artists and the public