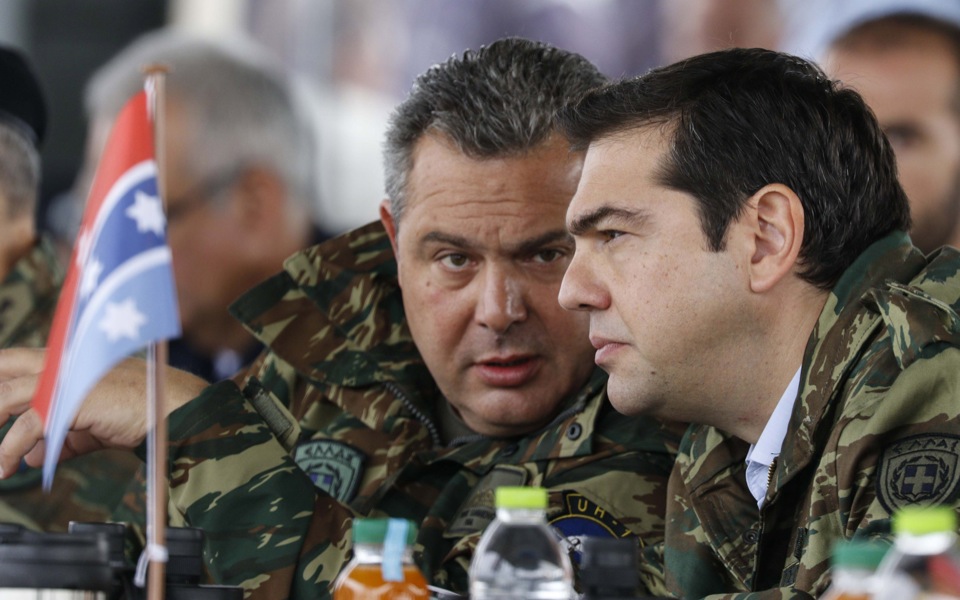 Prime Minister Alexis Tsipras (R) and Defense Minister Panos Kammenos are seen deep in discussion at the Parmeneion military exercises in Evros, northeastern Greece, Friday. During their visit, Tsipras pledged that his government would seek to restore wages in the military to 2012 levels, as per a court ruling in 2013. The draft legislation containing the first batch of prior actions Greece has to pass as part of its third bailout is due to be submitted in Parliament with the aim of MPs voting on the bill by next Saturday, the government said Friday.

Government spokesperson Olga Gerovasili said that the legislation would be crammed into a multi-bill consisting of several articles, not just one, as some SYRIZA MPs had feared and had already begun expressing objections about.

Gerovasili added that the “urgent” rather than “emergency” parliamentary procedure would be followed, allowing MPs ample time to debate the measures, which relate to the product market, tackling tax evasion, medicines pricing, the natural gas market and banking regulations. “Every party will have a chance to express an opinion about what it considers positive and what it considers negative and to adopt a specific position on what it supports and what it does not support,” Gerovasili told Kokkino FM.

She suggested that it would be surprising if New Democracy, PASOK and Potami oppose measures which they had essentially approved when they decided to back the third bailout during the summer.

“The other parties also carry a share of the responsibility to get the country out of the dead end quickly and effectively,” she said, adding that the opposition would be tested with regard to how serious its calls for “cooperation” and “consensus” were before the September 20 general elections.

The government official suggested that Athens had agreed with its lenders that the vote could take place on Saturday, October 17, rather than two days earlier, which had been the initial target.

It is expected that once the omnibus bill has passed through Parliament, the coalition will try to follow up with legislation of its own, not related to the bailout. The first initiative is likely to be the launch of a tender for broadcasting licenses. Ahead of the vote of confidence on Wednesday, Prime Minister Alexis Tsipras said that the relevant draft legislation would be tabled in the House “within 10 days.”

Reform bill to go to Parliament Monday with vote by Saturday