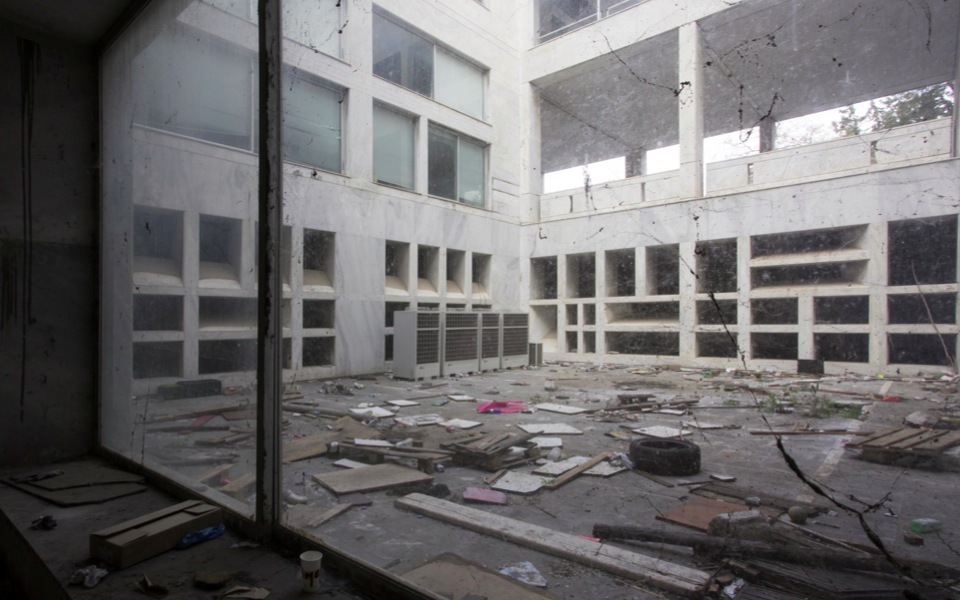 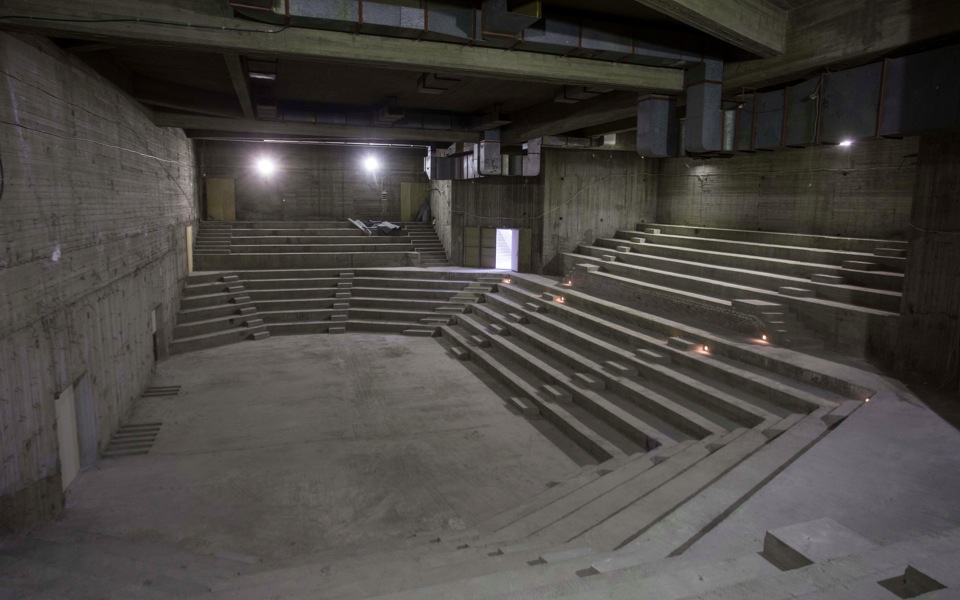 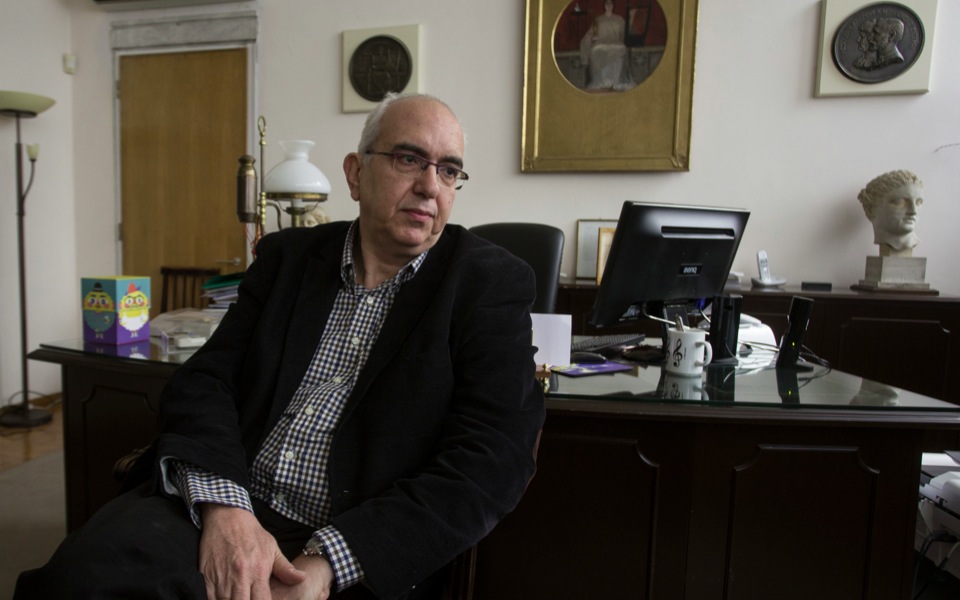 “I’ve been angry for the past three years. You’ll get angry too at what you’ll see,” said Nikos Tsouchlos in his usual mild tone as he welcomed me into his office at the Athens Conservatory on the corner of Rigilis and Vassileos Constantinou streets, where he’s been president of the institution since 2013, before taking me on a tour of parts of the buildings that have never been used since construction work stopped in 1976. A well-kept urban secret, the Athens Conservatory is one of the most expensive properties in the Balkans, yet over 6,000 square meters in the basement remains as it was 40 years ago when the money for the building’s completion ran out and the workmen laid down their tools. In 1980, the state undertook the cost of completing the work in exchange for ownership of the conservatory’s old headquarters.

Today, after so many decades of advancement in Greek society, a 700-seat amphitheater, a large foyer, teaching rooms and various spaces for events are waiting to be rescued, not just because abandoning them is, to put it simply, ridiculous, but also because making use of them could help the conservatory improve its dire finances.

“Careful you don’t trip,” Tsouchlos warns as we walk through the amazing basement areas, whose only source of light is that coming in from the internal courtyard which is level with the first basement. A few pigeons perched on the windowsills look at us in wonder. We tread carefully using our cell phones’ flashlights to show us the way as the ground is covered in debris and garbage.

My first impression is not one of anger, but surprise: How can such a fascinating asset exist right in the heart of Athens and hardly anyone know about it? Even in the dim light I can see evidence that architect Ioannis Despotopoulos wanted his building to make a bold statement.

“If you really want to get a sense of it, we should go up to the rooftop terrace,” says Tsouchlos. Another surprise awaits me there: one of the most beautiful terraces in the Greek capital, a 160-meter deck with a perfect view of Aristotle’s Lyceum, Lycabettus Hill, the Hilton Hotel and Mount Hymettus in the distance. Our half-hour walk in the basement and seeing the city from the the rooftop was a small revelation as to the indifference that exists toward prime real estate assets all over the Greek capital.

“Let’s recap,” says Tsouchlos when we return to his office. “This was an ambitious project for a 13,500-square meter building designed in 1950 and part of [then Prime Minister Constantine] Karamanlis’s plan for extensive cultural infrastructure in the center of Athens. The plan went mostly unrealized with the exception of the National Research Center and the conservatory, which, however, started being built in 1969 and is still regarded by many as a junta-era project. The original aim was to split the building into three wings, for music, dance and theater respectively. When it was delivered half-finished in 1976, only the first floor had been completed,” explains Tsouchlos.

So why wasn’t the building completed?

“That’s a good question when you consider the prosperity Greece has experienced [in the period since]: We have concert halls in Athens and Thessaloniki, we staged the 2004 Olympics,” says the conservatory’s director. “I won’t clear us musicians or the conservatory’s management of all responsibility because we did not put enough pressure on the state to get the work done. But you know what?
Lack of planning is Greece’s greatest ailment. There’s no thought for what assets we have, what we’ll need in the next few years and how we will organize our needs and tasks that need to be completed,” says Tsouchlos, who took over at the conservatory’s helm from Aris Garoufalis after the latter’s sudden death. Since then, he has had to deal with a number of serious financial problems – such as dozens of unpaid staff – which are gradually being put in order.

The Athens Concert Hall, regarded as one of the best in Europe, was built in the 1990s on the initiative of the influential publisher and businessman Christos Lambrakis with funding from the state, which owns the facility and had to bail it out when it filed for bankruptcy last year. It sounds contradictory when Tsouchlos, who was the concert hall’s longest-serving artistic director under Lambrakis, argues the state is to blame for the institution’s dire finances as it failed to rein in the publisher’s ambition and prevent him from building an extension for an opera house, also paid for by the state.

I ask Tsouchlos about this issue and he is emphatic. He says that the biggest mistake was the state allowing the construction of a basement opera hall, the Alexandra Trianti Hall, beside the original concert hall, an expensive endeavor that contributed to the organization’s bankruptcy.

“All moderation and control was lost with the construction of the Alexandra Trianti Hall. If the Megaron had stayed as it was, it would have been more viable and manageable, and would have been in a better position to play its role as the country’s classical music educator.”

Tsouchlos continues: “Athens will now have two opera houses. One is the aforementioned and the second is being completed at Faliro [on Athens’s southern coast at the Stavros Niarchos Foundation Cultural Center]. The eminent and determined [Greek National Opera director] Myron Michailidis has a real challenge on his hands to make the new opera house a part of Athenians’ lives, seeing as it is located outside the city center.”

Just as the state should have stopped Lambrakis from building the Alexandra Trianti Hall, so, says Tsouchlos, “should it have asked itself whether we needed a second opera house, even if the cost is taken on entirely by a generous donor.”

“I’m afraid that the biggest challenge in the crisis is to use our infrastructure correctly so that we save money and can channel funds to other areas,” he says.

Tsouchlos may be angry, but he’s not despondent. In the three years that he has been president, the Athens Conservatory has reaped funding from private donors to pay for a study on how the premises can be utilized.

“I have some good news to announce,” he said. “A third of the unfinished part of the building has been inducted into the National Strategic Reference Framework [an EU-backed fund known in Greek as ESPA] and if all goes according to plan, by the end of spring, construction crews will have started work on the amphitheater, the foyer and halls for studios. These will be ready within 12 months.”

What of the other areas that are in such a dire state?

“One section will soon host an exhibition by NEON, after the cultural organization agreed to secure a license and clean up a space of 1,500 square meters in the basement. This area should be open to the public for the exhibition by fall.”

The Abramovic Method: Getting in touch with our long-lost selves