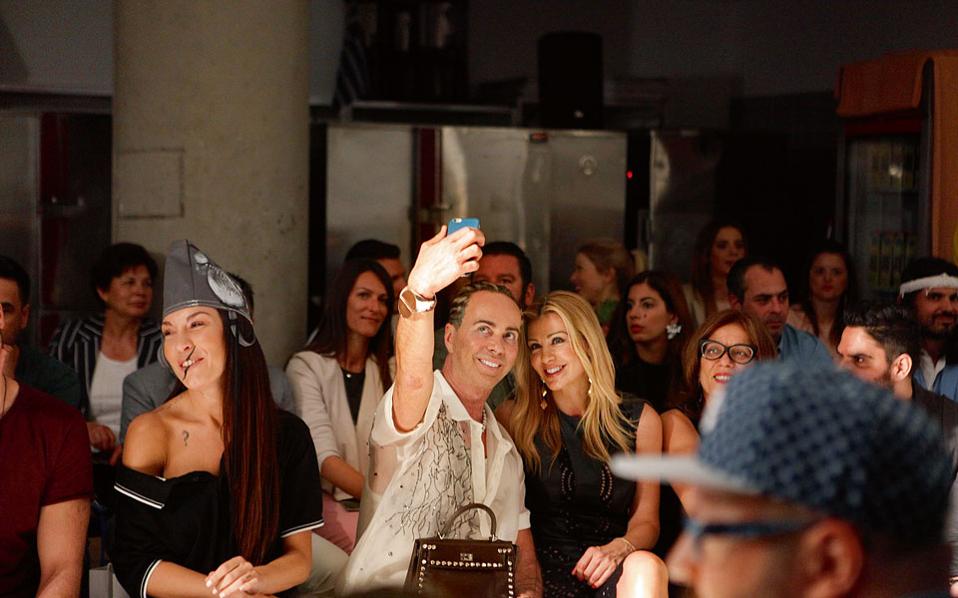 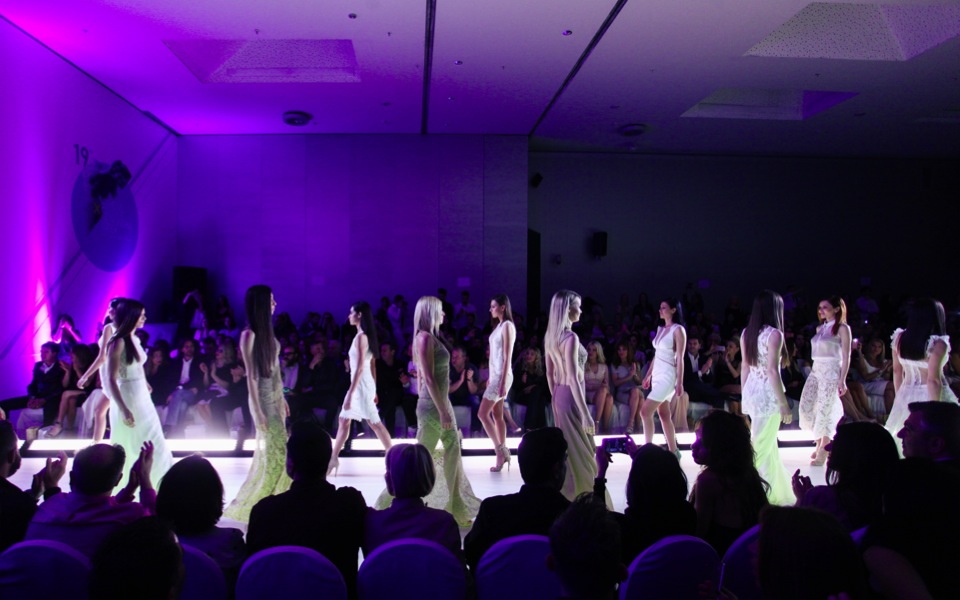 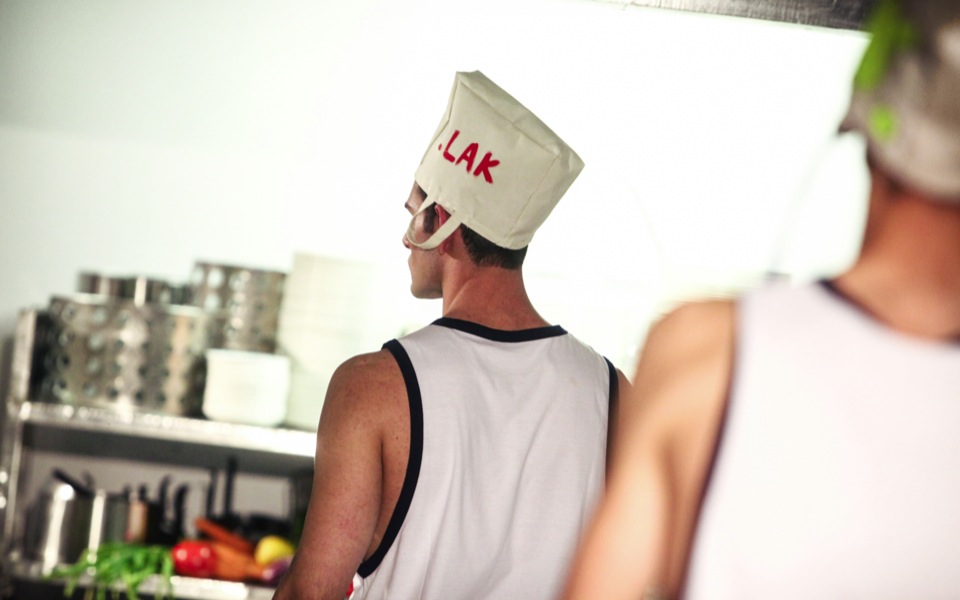 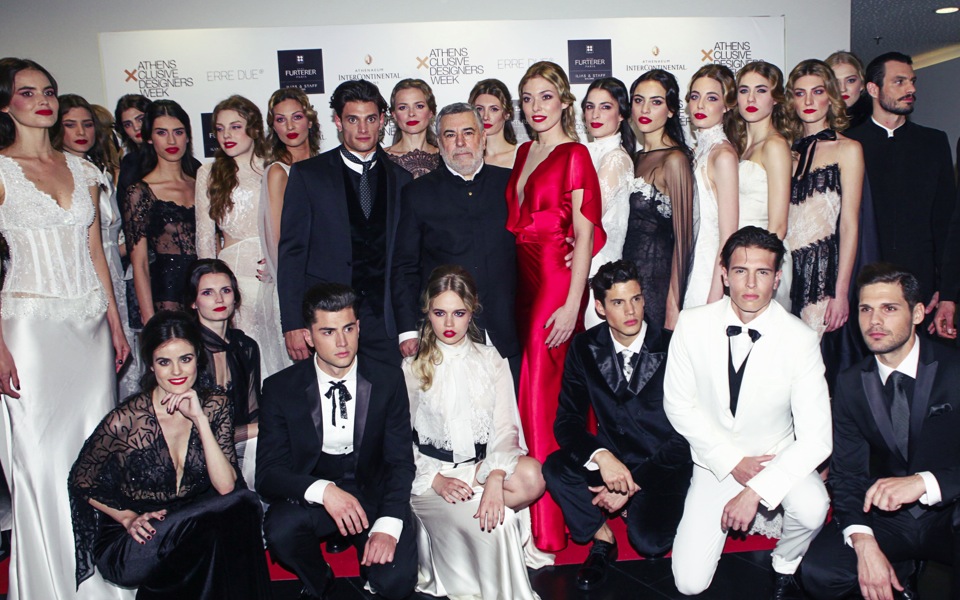 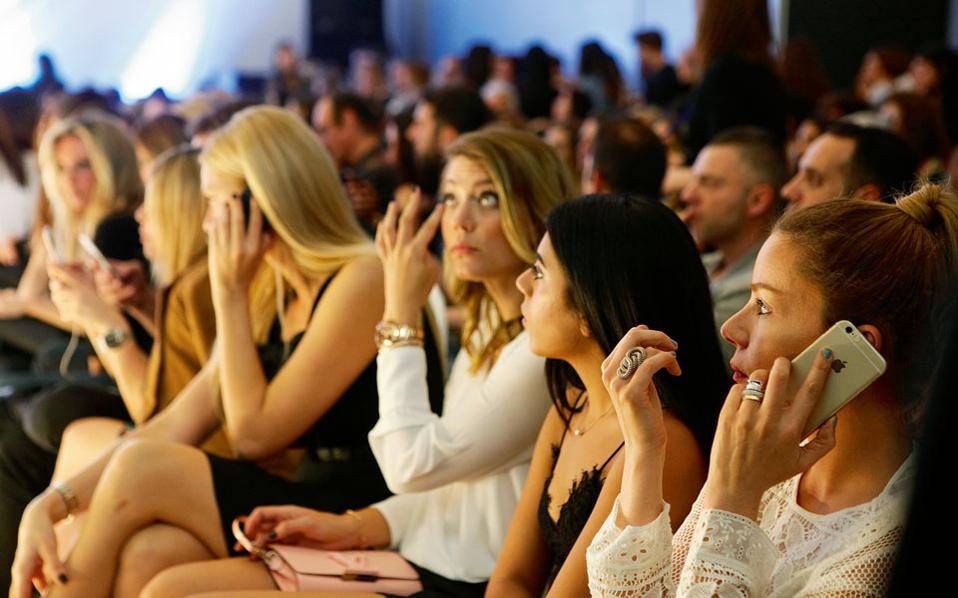 The creative effervescence in the kitchen area at the Ethniki Asfalistiki complex had little to do with culinary delights as Lakis Gavalas, the day’s “resident chef,” put the final touches on the bags-for-hats gracing the heads of the exclusively male models.

On the mini catwalk – aimed solely at journalists, bloggers and buyers – which began in the corridor and ended in the main kitchen – the polo T-shirt transformed into a tunic and much more as female silhouettes very loosely hugged the slim male bodies. The fun show signaled a fashion comeback, the return of Greek brand .Lak on the runway following a six-year absence. The occasion was a new edition of Athens Xclusive Designers Week.

“I’m still involved with the term ‘fashion’ and what it means” – he teaches the subject at the Pansik fashion school – “and given the energy I have amassed, I decided to take part in a team effort for the promotion of Greek fashion,” said Gavalas. “In my ‘ironic-humorous’ style, the show took place in the kitchen. A fashion show, whether big or small, must stir my emotions.”

Gavalas is a fine example of the ongoing “misunderstanding” between the local fashion scene, the public and the media. Long before his debts to the state hit the headlines, Gavalas was better known for his eccentric personal style than his entrepreneurial and creative activities.

While many in Greece find the private lives of Greek designers more intriguing than their suggestions for this and every summer, the local Greek apparel sector is fighting on. According to figures published by the Hellenic Fashion Industry Association (SEPEE), the sector currently comprises 1,230 companies employing 15,000 people in production and 20,000 in distribution. About 50 percent of the sector’s turnover comes from exports, which last year reached some 600 million euros.

In the meantime, Athens Xclusive Designers Week is marking 19 (fashion) seasons of efforts to promote local talent. The latest event included 13 fashion shows in three days and one day exclusively dedicated to new designers through catwalks and competitions. Designers such as Celebrity Skin emerged from the AXDW runway, while organizers also host companies and brands such as casual Greek label Funky Buddha.

“A major difference this time round is the reinforcement of the event’s international character, aiming at Greek fashion’s extroversion,” noted AXDW organizer Tonia Fouseki.

Representatives from an e-commerce platform based in London, buyers from Berlin, Dubai and Jeddah, and a fashion editor from Italian Vogue’s digital edition were among the foreign guests attending the shows. Meanwhile, it was London time on the runway, as a joyful pack of Greek fashion bloggers – including Miss Margaret Cruzemark – presented a portion of TopShop’s summer collection. A silver backpack by the British street fashion chain (represented locally by Sotris) seemed like an ideal accessory for several members of Greece’s current political establishment.

Local showbiz was represented in abundance in the front row for Yiannis Togos’s Kathy Heyndels, where the show opened with singer-muse Aggeliki Iliadi. The collection, “Body Sculpture,” kept the house’s signature style intact through sexy pieces built on fringes, embroideries, leather and transparencies in colors such as white and beige. Sharing the same catwalk was the menswear house of Giannetos, whose summer looks included soft pistachio and sweet blue for gentlemen’s trousers. Tassos Mitropoulos presented “Burlesque,” a collection inspired by the dynamism of swing. Corsets, feather, transparencies and leather details came in generous portions, while the evening wear had a boudoir feel. Black is the new black for Cyprus-based, guest Polish designer Natalia Jaroszewska whose monochrome collection featured floor-length dresses with plunging necklines and an emphasis on the waist. There was a change of scenery at Elmira Begatti, a Pilates instructor whose colorful sports wear was presented by models and athletes: Model Yiannis Spaliaras kept a dignified balance on the surfset (a surfboard turned into a gym machine). A camouflage theme on a jacket, a waistcoat and a duffle coat kicked off the show on Giorgos Sourgiadakis’s menswear runway, where actor Yannis Aivazis made a guest appearance.

A large portion of the local fashion scene seemed to be missing from the AXDW runway. While several designers are still going “catwalk solo,” others are keeping away from the spotlight. One of the most encouraging chapters of Greek fashion in the mid-2000s, with shows at Zappeion Hall and later on at the Technopolis cultural complex, now seem but a distant memory. The ensuing recession provided a further blow.

“The crisis strangled fashion. It’s not a priority anymore. People are now worried about sending their children to school. In the old days we had to face the issue of custom issues. Then, with the imposition of capital controls, we were forced to cancel orders. We have no credit abroad, as far as I’m concerned. I’m using my own money,” noted veteran Greek designer Makis Tselios, whose black-and-white collection included camisole and coat dresses. He appeared tireless as he talked about the implementation of a deal that will see pieces from his “Atelier” collection go on sale at a store in central Zurich. In the meantime, the designer’s ready-to-wear collection, ranging from garments to baby clothes for christenings, are manufactured in the Former Yugoslav Republic of Macedonia, Albania and Bulgaria, with the finishing touches being added in Greece.

Prior to uploading another video on the Internet with a single move of the hand, Mr Posh, aka Tasos Lazaridis, founder of PoshFashion, a blog currently registering about 150,000 hits per month, shared his thoughts on the local scene. “Personally I have always backed Greek designers, but they must pay more attention to the digital factor, as most of them ignore even the very basics, such as the importance of a Facebook page, for instance.”

This is not the case with the winners of and contestants for the event’s New Designers Awards, who use their social media skills to the max. The winner in the Best New Designer category this time round was Fotini LGK, whose work was inspired by traditional Japanese garments, among others.

What does the future hold for the aspiring creators of Greece’s occasionally glossy but perennially tough world of style?

Newcomers and more experienced designers are all dealing with the challenging issue of production in their own way, while the state remains absent.

“Europe is now looking toward smaller quantities, new ideas and swift deliveries,” noted Tselios, who foresees a rise in small-scale productions by Greek designer labels in the near future.

“Greek fashion is a work in progress. There is a lot of talent, but there are also those people whom we shouldn’t even bother looking for through Silver Alert,” added Gavalas.

Fashion meets again on and off the AXDW catwalk in six months' time.