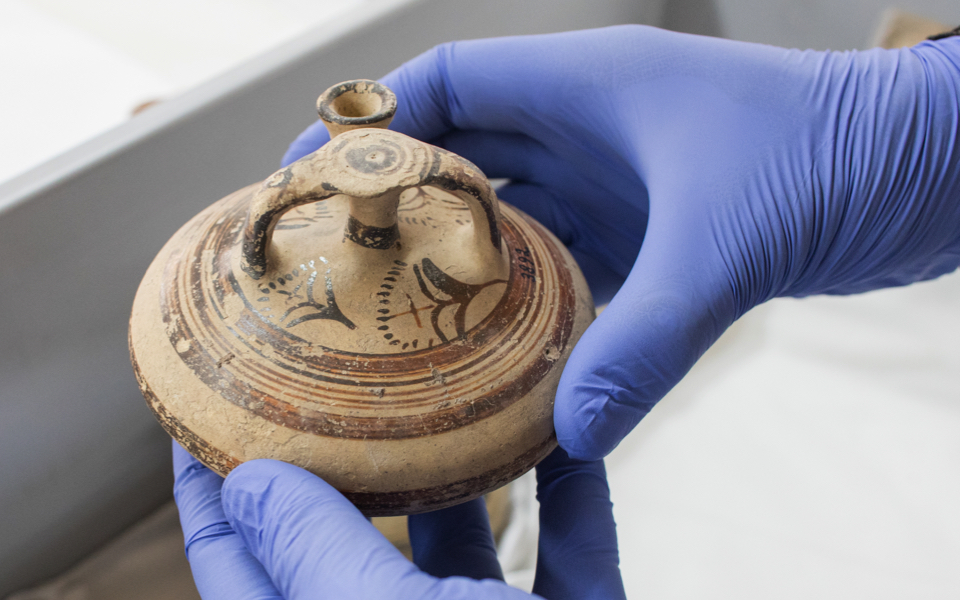 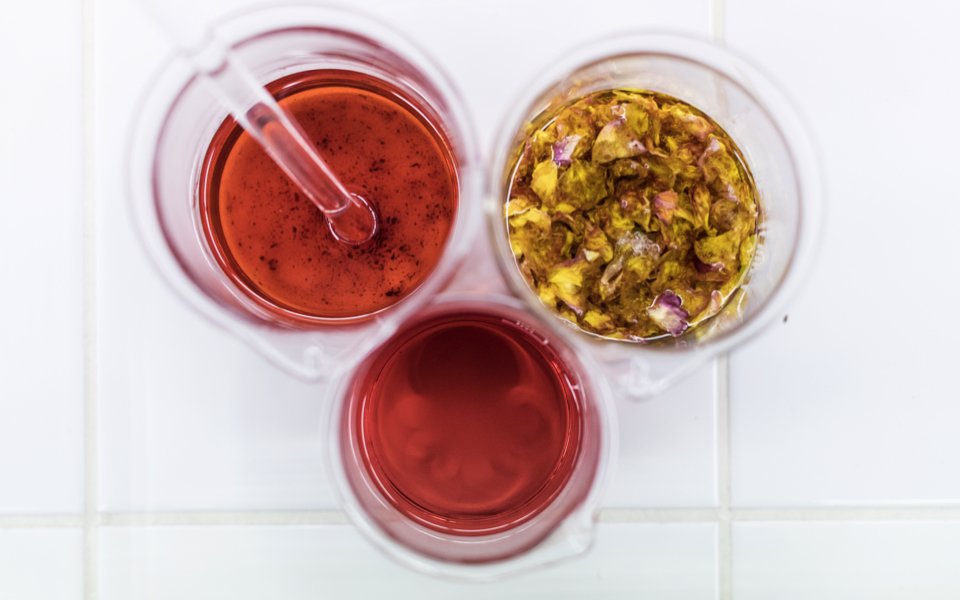 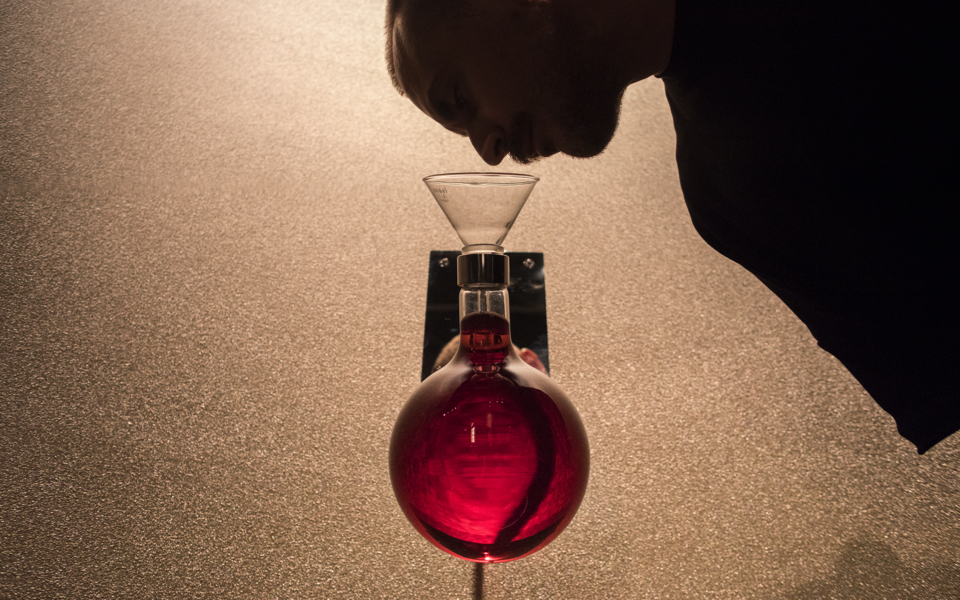 When the decanter opens, close your eyes. Let the scent of a rose take you back millennia in time. The scent of antiquity, “Rodo” (Rose) has the feel of a primitive scented oil and is among the exhibits in the National Archaeological Museum’s temporary exhibition hall, adding another facet to a never-ending search.

The scent was created in the context of “Countless Aspects of Beauty,” the museum’s latest major temporary exhibition and the last installment in a trilogy of exhibitions to celebrate the museum’s 150th anniversary. The exhibition opened to the public on Saturday, May 26.

The “optimistic” exhibition, as the museum’s director, Dr Maria Lagogianni-Georgakarakos, describes it, explores the archaeology of the senses, revealing a diversity that is underpinned by something universal. There are many expressions of beauty that have been preserved to this day and the exhibition covers a period from the Neolithic to Late Antiquity through 340 artifacts from the museum’s collections.

The star of the exhibition is that multifaceted expert in love and beauty, the goddess Aphrodite, who “welcomes” visitors half nude, draped in a himation (a type of ancient Greek garment) and accompanied by a sleeping Eros. All around her, a host of artworks shed light on diverse aspects of beauty, including grooming and fashion through the ages, among others. But no historical find – not even the exhibition’s ancient stirrup jars that were once used to store perfumes – carries a trace of the scents of antiquity.

The idea to create “ancient perfumes” in an attempt to approach antiquity through the sense of olfaction came from Lagogianni. Researchers from the R&D arm of the Korres cosmetics company took on the task of creating three scented oils using the same raw materials and methodologies as ancient perfumers.

The two sides began discussing the project in January of 2017. “Certainly the scent operates as a means of communication – we fall in love through sight, but also possibly through scent,” Lagogianni says, adding that the attempt to recreate an ancient perfume for the exhibition was part of an effort to “restore forgotten sensory experiences of the ancient world and to offer an original experience.”

The valuable scented oils were indicators of social status and were aimed at men as well as women. They were used by athletes at sporting events and by citizens during major events including childbirth, weddings and burying the dead.

As for the “trendsetting” Aphrodite, she would doubtless be willing to pull out the cork and try Rose, the first of the three perfumes (together with Sage and Coriander) that were created through experimental archaeology.

“It is one of the most magical moments that we have experienced as scientists and as Greeks,” says Lena Korres, co-founder and head of the Innovation Center of Korres, in a meeting room at the company’s factory in Oinofyta, north of Athens.

“We discovered, for example, that they would alter the chemical structure of the oils to make them suitable to be scented. We discovered knowledge that we don’t use in biochemistry and which existed so many thousands of years ago.”

In Oinofyta, Iordanis Samanidis, a chemist who specializes in the development and production of raw materials, began to cover the “gap [in knowledge] from the Bronze Age, from historical sources.” He studied Linear B tablets (the first written form of the Greek language) – the “ledgers” of the storehouse keepers in the Mycenaean palaces, where ingredients such as wine, wool, and honey were earmarked for the production of aromatic products.

To probe the use of the raw materials, he studied more modern texts, reaching the Library of Reythmno in Crete. His sources included modern researchers such as Ellen Douglas Hamill Foster (author of “The Manufacture and Trade of Mycenaean Perfumed Oil”), Cynthia Wright Shelmerdine (“The Perfume Industry of Mycenaean Pylos”), Michalis Vogiatzis and Ioannis Fappas. Ancient scholars such as Theophrastus (“Concerning Odors”) and Dioscorides (“On Medical Material”) also lent their knowledge.

Samanidis settled on three scents, on (favorite) rose, sage (making use of some creative freedom) and coriander. In a specially designed space, the recipe began with a basic method of infusion, where extra-virgin olive oil and water were boiled, while at the same time ground nutsedge (which was sourced from the island of Amorgos) and wine were used to make a paste. This mix of raw materials was then filtered, resulting in an oil-based solvent with the scent of nutsedge. The next step was to add rose oil (in ancient times they would have used fresh petals) for the aroma and powdered alkanna root for a more intense color.

Sage and Coriander will be revealed during the course of the exhibition together with other surprise exhibits. At the same time the Rose perfume will be packaged in a very limited number of bottles, as Sophia Zisimou, head of the company’s R&D department, has taken on the task of “translating” the aromatic oil into a cosmetic, in cooperation with the Greek perfumer Sophia Koronaiou, who works in Grasse, the historic heart of the French perfume industry.

In the meantime Rose (a single-dimensional scent, without the familiar notes that later became established in perfumery) will offer those exploring beauty in the Athenian museum a unique experience: one of the innumerable forgotten aspects of beauty.

The National Archaeological Museum (44 Patission, Athens, www.namuseum.gr) is open Mondays from 1 to 8 p.m. and Tuesdays to Sundays from 8 a.m. to 8 p.m.

Select finds from Antikythera shipwreck on display in Piraeus