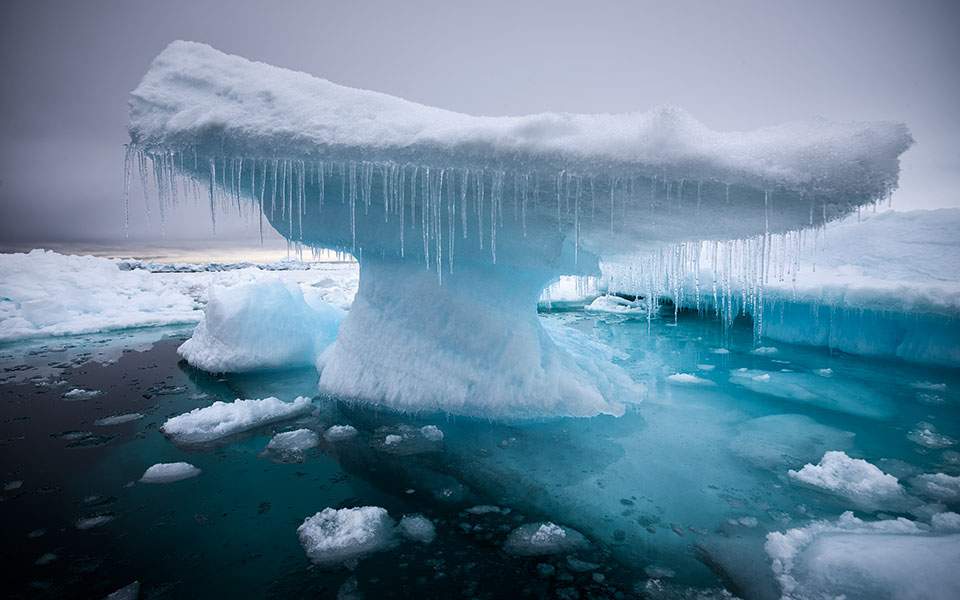 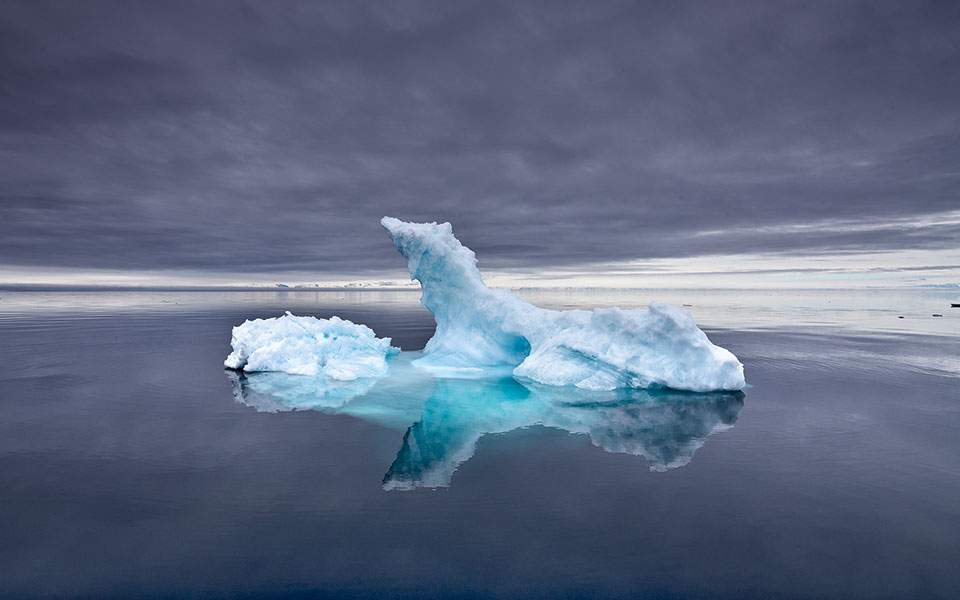 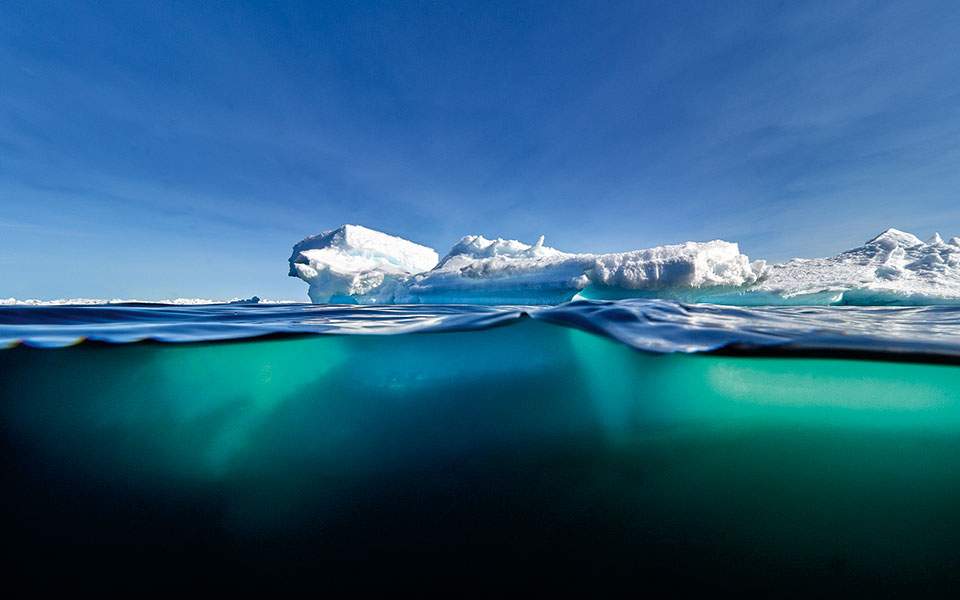 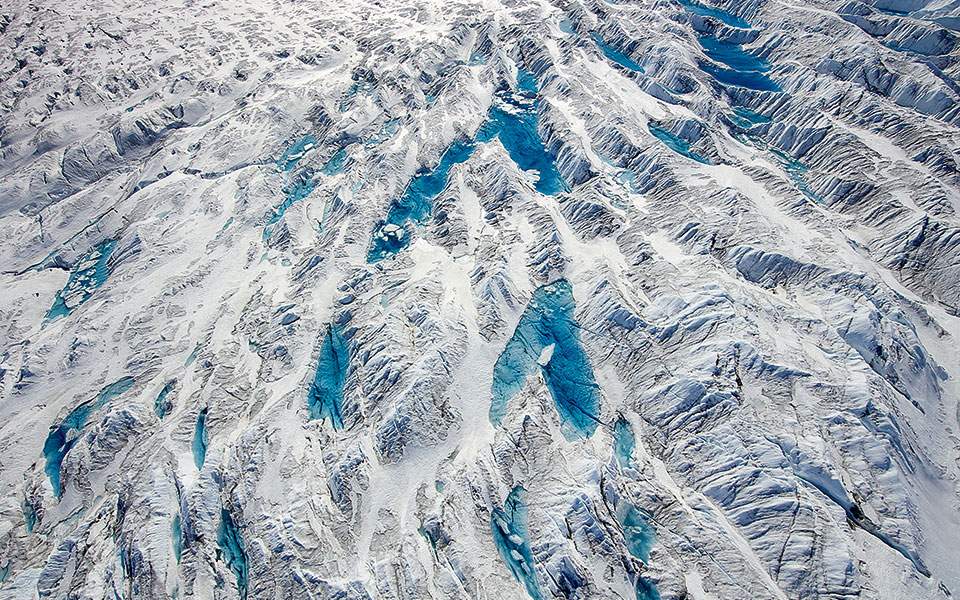 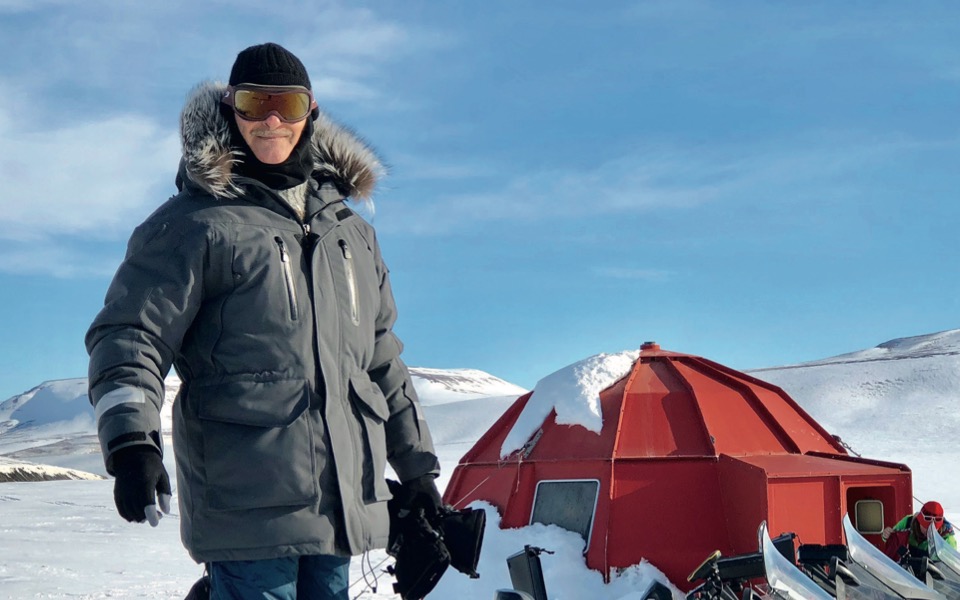 It’s an ever-changing spectacular: steep ravines and undulating curves around tips and troughs in a landscape that underscores the imposing solitude of the Arctic. “Icebergs are magnetic in every respect, evolving works of art of nature. You can watch an iceberg and in three days it may capsize, break up, change into something entirely new. The blue ice from below may appear, so that instead of being white, round and pointed, it may become emerald green with flakes of turquoise,” says Fokion Zissiadis, who has captured a series of such impressive landscapes with his lens, currently on show at the Benaki Museum’s Pireos Street annex in Athens.

To do so, the 64-year-old Greek photographer and explorer made four trips to Greenland, starting in 2016. He worked in the midnight sun, completely lost track of time and covered some 800 kilometers by snowmobile, exposed to perils that even the magnificent beauty of the landscape could not eclipse. “It is wonderful to float between the icebergs, but it is also very dangerous,” says Zissiadis. “There are three risks: A piece can break off and create a wave that tips your boat over; it can crack at the bottom and flip you over as it rises to the surface; or you can become trapped and crushed between two icebergs.”

Zissiadis was at a northern Icelandic fjord (his book “Iceland” has been published by teNeues) when he asked his local guide, Dui Landmark, what it was that he could see on the horizon. It was Greenland, some 600 kilometers away. At the time, Zissiadis was into photographing old American cars and his Icelandic guide told him of the existence in Greenland of abandoned US bases from World War II. The pair later visited one of these, Bluie East 2, by helicopter and Zissiadis was able to take a series of photographs of vehicles dating to the 1950s and thousands of barrels once used to store petrol. More visits followed, during which he photographed deserted Inuit camps, polar bears and muskoxen, as well, of course, as icebergs, which make up such an important part of the Greenland landscape, often venturing to extremely remote areas and working in temperatures as low as -30 Celsius.

These icebergs also form the core of the Benaki show, “Icebergs from Genesis to Extinction,” which is curated by Stavros Kavalaris and organized under the auspices of the Danish Embassy in Athens.

“Icebergs are formed as a result of a succession of natural phenomena,” says Zissiadis. “Snow builds up in the valleys and on slopes and hasn’t got a chance to melt because of the low temperatures. A frozen mass starts to slip off once it attains a certain mass, flowing like a river towards the sea. It slips into the water gradually, floating, and once it has reached a certain length breaks off into an iceberg, which floats off towards the North Atlantic. Many become trapped among the fjords and form a succession of small islands in the winter, like a highway for sleds and polar bears.”

The Athens exhibition consists of 39 large-scale, high-resolution photographs that give the impression of 3D thanks to OptiPlex technology. The sense of immersion is intensified by the sounds of the Arctic playing on the sound system, in a soundscape created by Thanasis Zlatanos and Studio Lollipop.

“It really is like looking at an Arctic fjord through a window,” says the photographer. Though the view from that “window” is spectacular, it belies the photographer’s tremendous endeavors: the physical and mental challenge of extreme temperatures and solitude, the perseverance and the luck factor, which plays such an important role in the final result. The viewer little understands the huge amount of planning that Zissiadis has to do before any expedition, the extensive research, mapping out routes on Google Earth and so much more. Yet once he gets to his destination, “everything is different.”

‘No light without dark’

A graduate of Thessaloniki University’s School of Architecture and with postgraduate studies at the University of Pennsylvania, he entered the tourism business in 1980 and served as vice president of the Sani Resort in northern Greece until he decided to leave the industry in 2015 to focus on his photographic expeditions, which he had originally started as a sideline to his professional commitments.

This change in career paths, however, did not signal a shift in his personal life. Zissiadis is no lone wolf; he’s been happily married for 40 years and has a son, Leonidas. His wife, Mata Tsolozidis, accompanied him on his first trip to Greenland and has always been there to welcome him when he returns from every expedition since. “There’s always a sense of melancholy when you come back because you’ve been experiencing an entirely different reality. You return to ‘normal’ life with mixed emotions, in the same way that photography itself is based on the principle of contrasts: There’s no light without darkness, no joy without sadness,” he says.

Greenland, meanwhile, remains a strategic point on the world map: A major radar base in World War II and the Cold War, today the island’s coast forms a part of the Northern Sea Route currently used by Chinese and Russian cargo ships. Tourists were not allowed on the island until 1960 and the locals had no contact with the outside world. “They went from the Stone Age to the Internet Age in 60 years,” says Zissiadis.

With 70 percent of its surface area covered by ice, Greenland is also at the center of the global discussion on climate change. “Man is very, very small and insignificant to be able to change the climate, which is an incredibly complex thing, via his activities – like those which produce carbon dioxide and pollution,” he says. “The climate depends on enormous forces that are beyond our control, from the Earth’s orbit to the tilt of its axis. There were periods of global overwarming in the past, with higher temperatures, but also of global cooling, when there was no industry and no men. Of course we should not harm and pollute the environment and, yes, we are in a period of warming today, but I can’t believe that this is the result of man-made pollution and carbon dioxide.”

The Greek photographer is also about to publish a book on Vietnam with Rizzoli, the publishing house that also agreed to publish his work on Greenland. In the meantime, he is already thinking of new missions to places such as Siberia and Antarctica, but also in Greece, which he says he’s “saving for last.”

Until then, he prefers to carry on as a “commando visitor-photographer” attempting to record life.

“Photography is what you see with your eyes, feel with your soul and coordinate with your memory,” he says. “I take photographs, but I respect the work of professional photographers. I’ll let my work speak for itself.”

This article first appeared in K, a supplement of Kathimerini’s Sunday Edition.

Personal freedom where the sea meets the sky

Homage to the unsung heroes of photojournalism