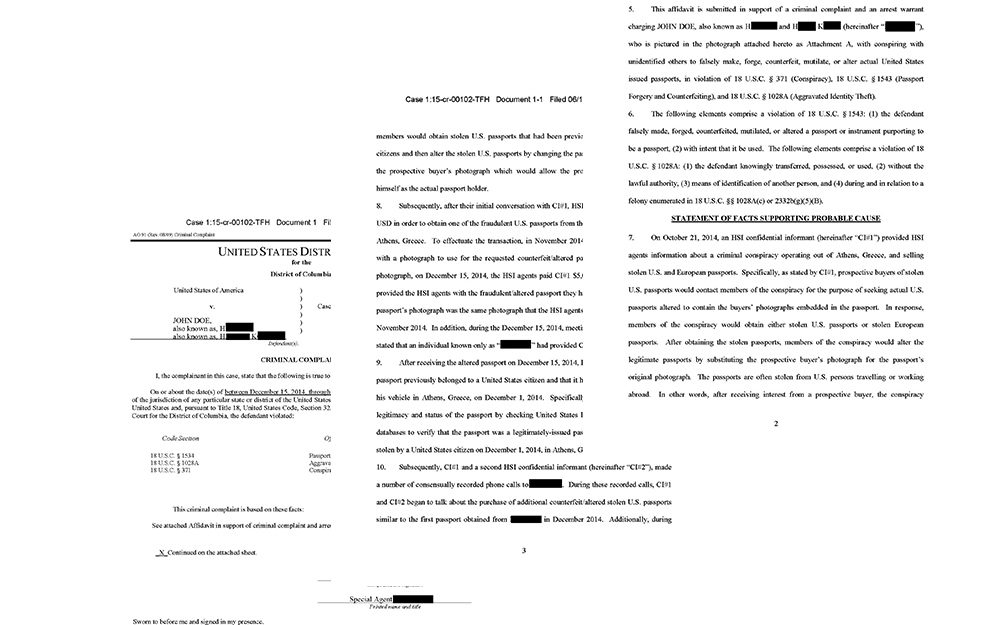 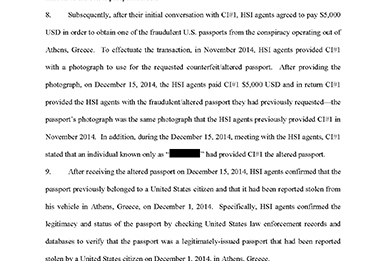 On the night of July 20, in the downtown Athens neighborhood of Exarchia, officers from the Greek Police’s Attica Aliens Directorate arrested 46-year-old H.K. and charged him with forging travel papers. But they weren’t the only ones who were after the Syrian national. Before entering the Greek authorities’ sights, H.K. is believed to have supplied a secret agent from the US with forged American passports, at a cost of 10,000 euros.

The agent had introduced himself to H.K. in Athens posing as a criminal who was interested in buying forged travel papers for members of the ISIS terrorist group. Since that summer night, in his cell at Korydallos Prison, H.K. has been counting the days and wondering whether he will stand trial in Greece or the United States.

“I was the middleman for the passports but I’m not a terrorist and have no ties with terrorists,” H.K. told Kathimerini by telephone. He speaks fluent Greek as he’s lived in the country for 25 years and in the past worked as an interpreter with nongovernmental organizations.

“When they told me they wanted passports for Daesh I didn’t take them seriously,” he said, referring to one of the other names used for the ISIS jihadists.

On October 27, during a hearing before the Athens Appeals Council, H.K. claimed that he had been tricked. “I didn’t know what I was getting into,” the court transcripts show him as saying. Three Greeks stood as his defense witnesses. The council eventually approved a request from US judicial authorities for the suspect’s extradition on charges of passport forgery, counterfeiting, aggravated identity theft and conspiracy.

After he appealed that decision, his case went to the Supreme Court.

H.K.’s lawyer, Zacharias Kesses, claims that the US secret services violated the legal terms of interrogation, entrapped the Syrian and incited him to commit a crime he would not otherwise have committed.

H.K. was born in the coastal Syrian city of Jableh, a few kilometers from Latakia. From a young age he was an active supporter of the opposition movement against Hafez al-Assad, the father of current Prime Minister Bashar al-Assad. As he stated in 2007, when he applied for political asylum in Greece, he was still a teenager when in March 1988 he was arrested by the Syrian secret services and held for five days on charges of collaboration with a Lebanese organization. After his release, he left the country illegally.

He initially passed through East Beirut, where he was greeted with skepticism. Authorities there suspected him of being a Syrian spy. He was arrested by the Lebanese Forces, a Christian militia during the civil war, but released after 15 days as there was insufficient evidence to hold him.

“I then took part in various actions against the Syrian army,” he told Kathimerini. He worked as an engineer on the Lebanese merchant ship MV Zeina, breaking Syria’s embargo on Lebanon.

That same ship brought him to the port of Piraeus a year later.

“We fled after the Syrian invasion of Lebanon. We couldn’t get to Italy as we had hoped, so we came to Greece,” he said.

His time in Athens was anything but smooth. Shortly after arriving he started using drugs. “The next 16 years of my life were addiction and prison for petty crimes,” he told Kathimerini. “I’d hit rock bottom.”

In 2006 he joined a state-run drug rehabilitation program that provides counseling and support to addicts both in prison and after their release. He worked odd jobs, as a painter, delivery man, assistant electrician and furniture repairman. That was until the influx of refugees from Syria began.

In late 2013, H.K.’s brother managed to reach Sweden via Athens. H.K. said he was thinking of following him but had problems getting hold of a convincing forged passport and made several failed attempts to leave the country. In some instances he was arrested and declared a different name and nationality, fearful that he could be deported to Syria. He had quite a few stints at the migrant detention centers in Elliniko and Amygdaleza.

“All of the passports I had made showed they had been tampered with. They were wrong,” he said.

He claimed that was the reason he decided to refer Syrian refugees to a good forger he knew so that they wouldn’t be cheated.

That master, H.K. told Kathimerini, was a 35-year-old Pakistani man.

“He lived in Greece for eight years. When he first arrived he made logos for bootleg CDs and later switched to passports. He was the best I knew. He could do a professional job even with a cheap printer,” he says.

“He was the only one who could change the photograph on a visa in an already altered passport so it could be used again by another migrant. He had developed his own techniques as well. He used oven cleaner so he wouldn’t leave traces.”

In February, about eight years after he applied for asylum, H.K. got the green light and a three-year residence permit.

According to American court records, H.K. had come onto the radar of the US secret services in autumn of 2014.

“On October 21, 2014, an HSI confidential informant provided HSI agents information about a criminal conspiracy operating out of Athens, Greece and selling stolen US and European passports,” a secret agent working with Homeland Security Investigations out of Los Angeles said in a sworn statement.

In the next two months, the informant claimed to have contacted H.K. by telephone at the request of HSI and received a counterfeit American passport for 5,000 euros. According to the court documents, the passport had been stolen from an American’s car in Athens on December 1, 2014.

According to the American agent’s testimony, two confidential informants called H.K. and asked him to procure more passports, saying that this time they were – supposedly – for members of Daesh or Jabhat Al Nusra, the Syrian branch of al-Qaida. H.K. says that one of the informants who first got in touch with him was an old acquaintance, an anti-regime activist and a member of the Free Syrian Army who had embezzled money back home and was living in Sweden at the time.

On May 29, H.K. was finally approached by the HSI agent posing as a buyer. “He spoke Arabic and said his father was Lebanese and his mother Thai, to explain his Asian features,” said H.K. The agent told H.K. in meetings that were videotaped and recorded that the passports were for ISIS, according to the case file.

After taking 5,000 euros and four passport photos, H.K. is said to have delivered as many American passports to the US agents on June 3, in addition to receiving another 5,000 euros for completing the job. The passports were genuine ones that had been lost or stolen. H.K. claims he bought them from another supplier and that they were counterfeited by an associate.

The agent asked H.K. for another passport, but the meeting never happened because the Syrian was arrested by Greek police, along with a 29-year-old Pakistani man for different offenses.

The Greek Police had been watching H.K’s home in Exarchia at least since July 14 without knowing that the Syrian was also being kept under surveillance by the Americans. Six days later, during a sweep, police officers found the Pakistani suspect, identified as M.E., with a bag containing 94 temporary authorization documents for migrants issued by authorities on the island of Chios, as well as forgery equipment in his home. It appears from the records that the American agent was unaware of the development as he had been looking in vain for H.K. until the US was informed of his arrest.

On December 8, the Supreme Court rejected H.K.’s appeal and approved his extradition to the US. The case is now in the hands of Justice Minister Nikos Paraskevopoulos, who will decide whether to sign the final order.

“We will submit a memo to the minister so he does not sign the extradition order, specifying the issues of the exclusive jurisdiction of the Greek authorities and the illegal entrapment,” said Kesses. The lawyer also plans to take the case to the European Court of Human Rights.

Until the matter is settled one way or another, H.K. will remain at Korydallos.

“I can’t understand myself why I agreed to do it,” he said of the US passports. “For the money? I don’t know.”

The hours before a deportation

Americans and Greeks started the 2004 wiretaps together

Knocking on the gates of Europe