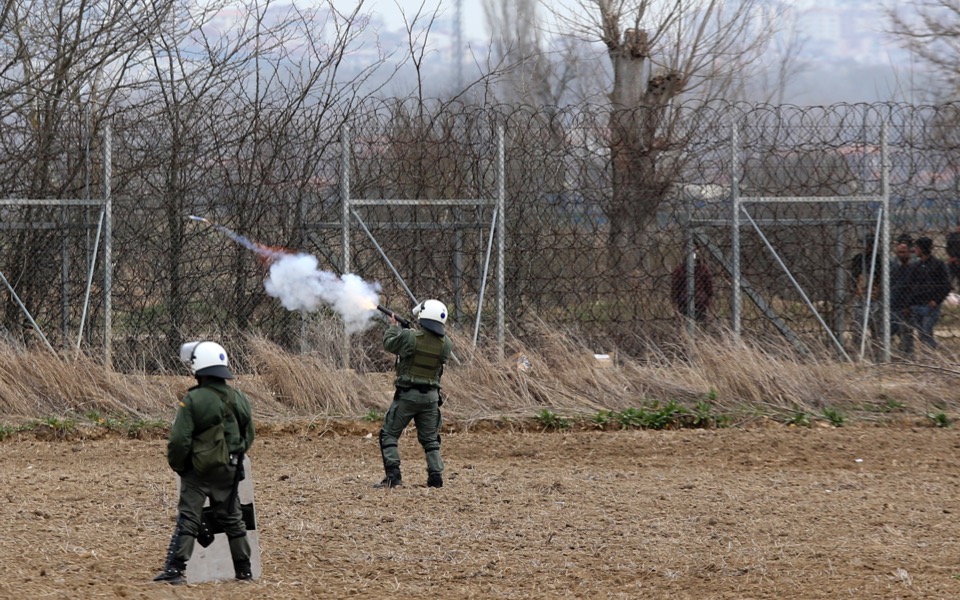 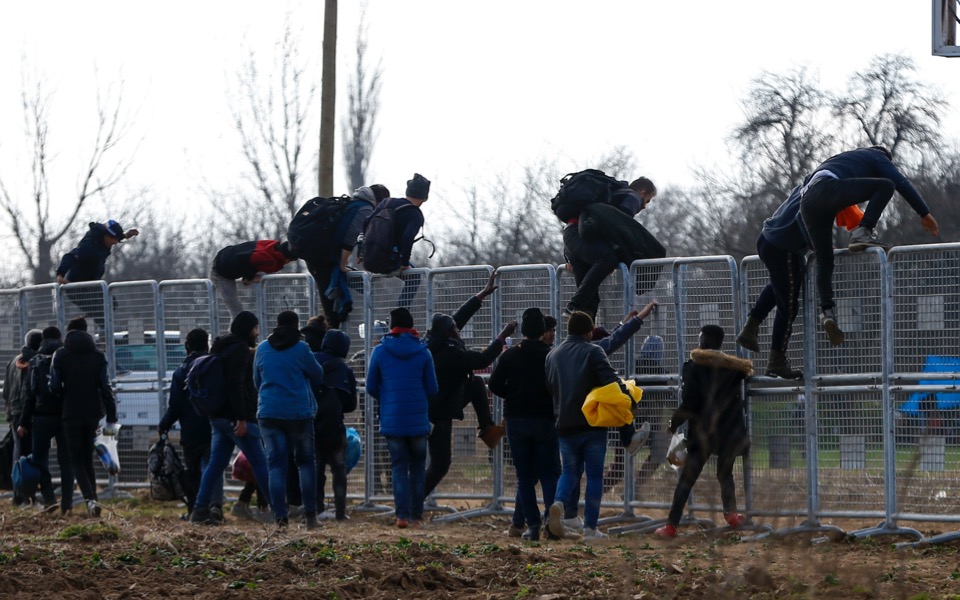 Greek authorities fired tear gas and stun grenades to drive away a crowd of migrants making a push to cross the border from Turkey on Wednesday, as pressure on Greece continued after Turkey declared its previously guarded gateways to Europe open.

Turkish authorities said gunfire from the Greek side killed one person and wounded five others — an assertion the Greek government rejected as "fake news."

The clashes were near the border village of Kastanies, along a border fence that covers much of the frontier not demarcated by the Evros river.

Turkey made good on a threat to open its borders and allow migrants and refugees to head for Europe last week. Turkish President Recep Tayyip Erdogan's action triggered days of violent clashes at the Greece-Turkey land border.

Thousands of migrants and refugees have gathered at the frontier, and hundreds more have headed for the Greek islands from the Turkish coast.

The office of Ekrem Canalp, governor for the Turkish border province of Edirne, said one migrant was killed and five others wounded after Greek police and border units fired tear gas, blank rounds and live ammunition at migrants gathered between the Turkish and Greek border crossings of Pazarkule and Kastanies.

"The Turkish side creates and disperses fake news targeted against Greece. Today they created yet another such falsehood," he said. "There is no such incident with fire from the Greek authorities," he said.

During the clashes earlier Wednesday, reporters on the Greek side of the border heard what sounded like gunfire, though it was unclear whether this was live ammunition.

A group of people could be seen carrying something which could have been a person between them, and running to the Turkish border post. Shortly afterward, and ambulance was heard leaving.

Reporters on the Turkish side saw at least four ambulances leave the area.

The head of emergency services at Edirne's Trakya University Hospital, Burak Sayhan, told journalists six people had been admitted to the emergency department Wednesday, including one who was dead on arrival. He said one person had been shot in the head, two had gunshot wounds to their lower and upper extremities and one had a broken nose.

Greece has also come under migration pressure from the sea. Greek islands that are relatively short distance from Turkey by water are seeing even more new arrivals. A child died when the dinghy he was in capsized off the coast of the Greek island of Lesvos earlier this week.

Greece sent a navy ship to Lesvos to house more than 400 of the new arrivals. Tension has mounted with some local residents on the island, where the main migrant camp is massively overcrowded.

The government has called the situation a direct threat to Greece's national security and has imposed emergency measures to carry out swift deportations and freeze asylum applications for one month. Migrants have been reporting being summarily pushed back across the border into Turkey.

The mass movement to Greece's borders of migrants and refugees, the majority of who appeared to be from Afghanistan, has appeared organized. Buses, minibuses, cars and taxis were provided in Istanbul to ferry people to the border, while some of those who managed to cross have said they were told by Turkish authorities to go to Greece.

Turkey's announcement that its border to Europe was open came amid a Russia-backed Syrian government offensive into Syria's northwestern Idlib province, where Turkish troops are fighting.

The offensive has killed dozens of Turkish troops and sent nearly a million Syrian civilians toward Turkey's sealed border. However, Oleg Zhuravlev, head of the Russian military's coordination center in Syria, said Tuesday claims about a humanitarian crisis in Idlib were false.

European Union interior ministers held emergency talks to show solidarity with Greece and to drum up more equipment to bolster the 27-country bloc's outside border with Turkey. Other officials accused Turkey of "blackmail" for waving migrants through.

The European Commission has praised Greece as "the shield" on Europe's external borders. Commission Vice-President Margaritis Schinas said "there are 20,000 people that have been instrumentalized by buses to be sent, creating an unprecedented situation."

Turkey, for its part, accused Greece of mistreating refugees.

Erdogan on Wednesday called on Greece and other European nations to respects migrants' rights. He screened a photograph depicting Greeks who reportedly found refuge in Syria in 1942, saying: "Greeks who try all kinds of methods to keep refugees away from their countries — from drowning them at sea to shooting at them with bullets — should not forget that they may need to be shown the same mercy some day."

He also accused EU countries of hypocritical behavior, saying they had rushed to Greece's help "with money, boats and soldiers" to prevent a new influx of migrants but ignored Turkey's plight concerning 3.7 millions Syrian refugees on its territory.

Meanwhile, the Czech Republic, Hungary, Poland and Slovakia pledged to help Greece to deal with pressure along its border. The four countries have been known for their tough stance against migrants and rejected an EU plan to redistribute refugees in member states.

Speaking to reporters after a meeting with Erdogan, Borell said that the EU delegation asked Turkey "not to encourage the further movement of refugees and migrants toward the EU borders."

"We had the opportunity to express our understanding of the difficult situation Turkey is currently facing but also stressed that the current developments at the European borders is not leading to any solution," he said.

Borell said Turkish officials' response was that Turkey was not encouraging people to move but that "they cannot prevent people from doing so."

Greek authorities said there were about 15,000 people along the Greek-Turkish land border on Wednesday, and they had blocked 27,832 attempts to cross the border between Saturday morning and Wednesday morning. A total of 220 people who managed to cross were arrested.