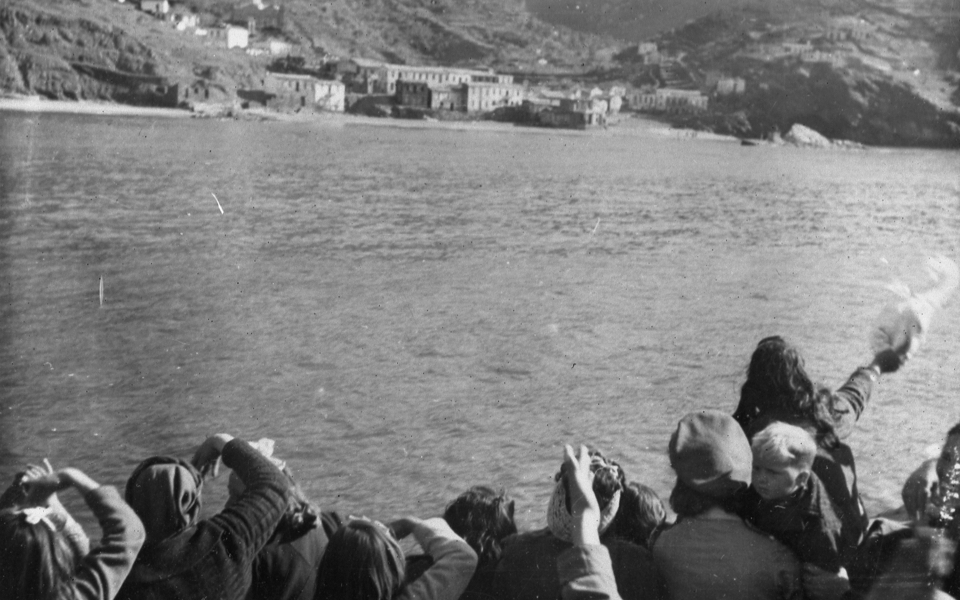 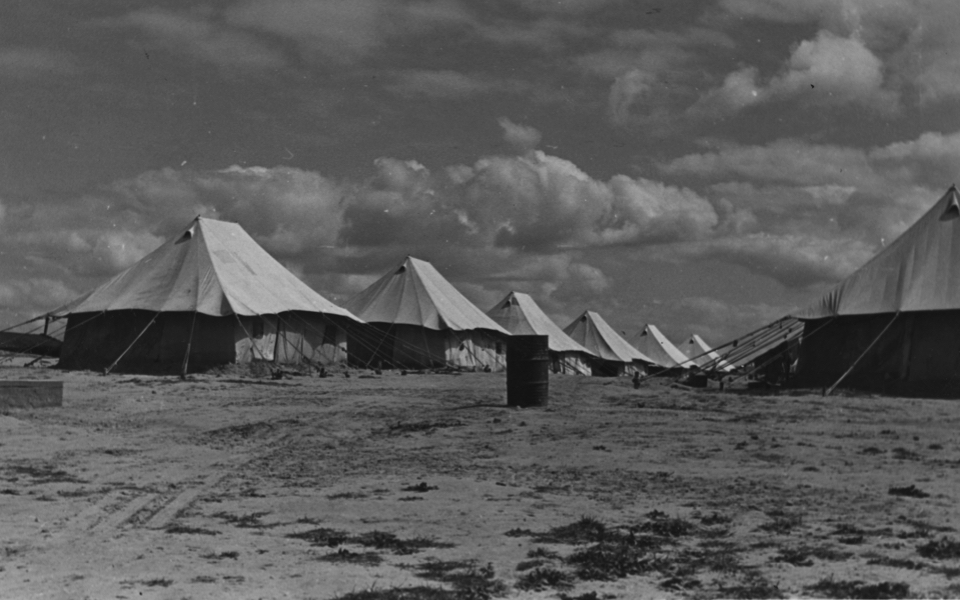 In 2015, the Greek public was shocked to learn about the young Syrian refugee Alan Kurdi, who lost his life in the waters of the Aegean while trying to reach Europe with his family. They were seeking a better future. That story is only one aspect of the drama of the Syrian refugees, who even today continue to attempt the Aegean crossing after escaping the war that is tearing their country apart. Thousands have arrived on the Greek islands of the eastern Aegean, the first station of their odyssey, where Greek islanders have welcomed them. Hundreds of others, unfortunately, lost their lives trying.

Almost seven decades before little Alan Kurdi’s death, another refugee incident appeared in the headlines in September 1945. The British ship Empire Patrol caught fire while carrying 464 Greek refugees home from Port Said in Egypt. As a result, 33 refugees, among them 11 children, lost their lives. Among the survivors were three children whose photo was published in newspapers around the world.

The modern quest of the Syrian refugees has revived memories of a similar Greek tragedy during World War II at the time of the triple occupation of the country by German, Italian and Bulgarian forces. It was then that more than 25,000 Greeks, mainly from the eastern Aegean islands (Chios, Lesvos, Samos, Icaria) and the Dodecanese, escaped to the coast of Asia Minor, Turkish soil, to save themselves from the consequences of the humanitarian crisis that plagued occupied Greece. These refugees fled toward the Middle East in two waves. The first was the result of starvation during the winter of 1941-42. The second followed after Italy’s capitulation in September 1943, when the Germans tried to establish control in the eastern Aegean.

The Greek refugees were viewed by the international community as “displaced persons” – individuals who “were forced to leave their homes because of war and found themselves in liberated or conquered areas.” The meaning of the term was intentionally broad in order to include different groups of people such as refugees, the Jews who had survived the Holocaust, unaccompanied children, forcefully recruited workers who had been transferred to the Axis countries and German settlers in other European regions. The United Nations Relief and Rehabilitation Administration (UNRRA), established in 1943, was responsible for the repatriation of displaced persons to their motherlands. It is estimated that there were more than 21 million displaced persons in Europe in the middle of 1943.

The Greek refugees moved in accordance with the instructions of the British military authorities and the exiled Greek government either in British-administered Cyprus or in the Middle East. But the management of the refugee issue by the Allies, especially by the British, evolved into an extremely difficult equation. The Greek case was not the only headache. Millions of impoverished refugees from across Europe attempted to escape from their Axis-dominated countries and find safe areas. What would they all do? Where would they be placed and who would assume the financial burden of looking after them? Poles, Yugoslavs and mainly Jews moved east across the European continent in massive numbers to the Middle East, where the tentacles of the German new order had not yet spread.

Neither the Middle East nor North Africa had escaped the drums of war. At least until 1943, when the Allied forces gradually prevailed, these areas evolved into theaters of war and fierce confrontation between opposing alliances. Particularly on the North African front, the Panzer divisions of Erwin Rommel threatened to dominate the region. Fortunately, the region of northern Egypt, the Sinai Peninsula, Palestine to Gaza and north of Lebanon and Syria evolved into a land of promise for tens of thousands of refugees and displaced persons. In these lands, places of martyrdom for centuries, thousands of survivors were hosted for about four years. The Second World War did not take place only on the battlefields. The psychological limits of each society were tested, the moral value system was shaken, and new paths were traced on the road to humanity and humanitarian organizations.

It is also interesting that the city of Aleppo was the first resettlement station for the Greek refugees. From there, they were dispersed and settled mainly in five large refugee camps in the Middle East, those of Nuseirat in Gaza, Moses’ Wells and El Shatt on the Sinai Peninsula, and Tolumbat and Khatatba in Egypt. These camps were ruled first by the Middle East Relief and Refugee Administration (MERRA) and then by UNRRA. Generally, life in the camps for the refugees was better than back home. Refugees were helped by many humanitarian organizations, including the International Red Cross. They facilitated services such as education, entertainment and work. In addition to the refugee camps, thousands of Greek refugees settled in Cyprus as well as African regions such as the Belgian Congo, Ruanda-Urundi, Tanganyika, Ethiopia and South Africa.

Those that looked after the Greek refugees in state-run institutions or privately or as members of government, administrative and military bodies or as members of humanitarian organizations and committees, made exceptional, indeed extraordinary, contribution to successfully concluding the refugee issue. Both the British through MERRA and the international community through UNRRA made profound efforts to save Greek refugees, secure transportation for them and return them to their homes. The same was done by the local governments of the countries involved in the Middle East and Africa which hosted the expatriates by offering them all possible assistance. Hundreds of official reports, memoirs and interviews confirm the spontaneous demonstration of humanitarianism encountered by the refugees in the host countries where they generally lived much better than in their homelands and where they received high-quality care and education and acquired various skills.

The Greek refugees remained in the above areas until the end of the Second World War. Then they were gradually repatriated to Greece, from 1945 to 1946, with UN assistance through UNRRA. This international organization took care not only of the distribution of humanitarian aid to Greek refugees but also of their education and professional acclimatization.

The history of refugees is a part of the history of humanity. Refugees have appeared during almost every historical period and come from every geographical area. In particular, the area of the Aegean Sea has been a junction of refugee and migrant trafficking in recent years. Especially for the Greeks, the Aegean is inextricably linked to the memories of Asia Minor, the burning of Smyrna in 1922 and the destruction of Hellenism in Anatolia. During the First World War and the Asia Minor Campaign thousands of Greek refugees crossed from Asia Minor ports to the Greek islands and mainland Greece, leaving the bones of their ancestors on the blessed land of Ionia. But also for the Muslims of the Balkans, the Aegean was the “bitter” sea, which led them through the Balkan Wars from their birthplaces to their new homelands.

Under the same sky in the Aegean Sea and on the beaches of the Greek islands and the Asia Minor coast, similar human stories and dramas of Christians, Jews, and Muslims have long been played, making the Aegean and the Mediterranean the “sea of refugees.” Millions of refugees have followed the same paths and mourned the effects of expatriation and persecution.

In the 21st century, the time has come for the memories of the past to help transform the same sea into a center of culture, peace and coexistence.

Iakovos D. Michailidis is an associate professor of modern and contemporary history at Thessaloniki’s Aristotle University and the author of the book “Odysseus’ Children: Greek Refugees in the Middle East and Africa (1941-1946)” (in Greek, Athens, 2018, Metaixmio).

The Middle East is changing Europe

Greece, Europe and the refugee crisis