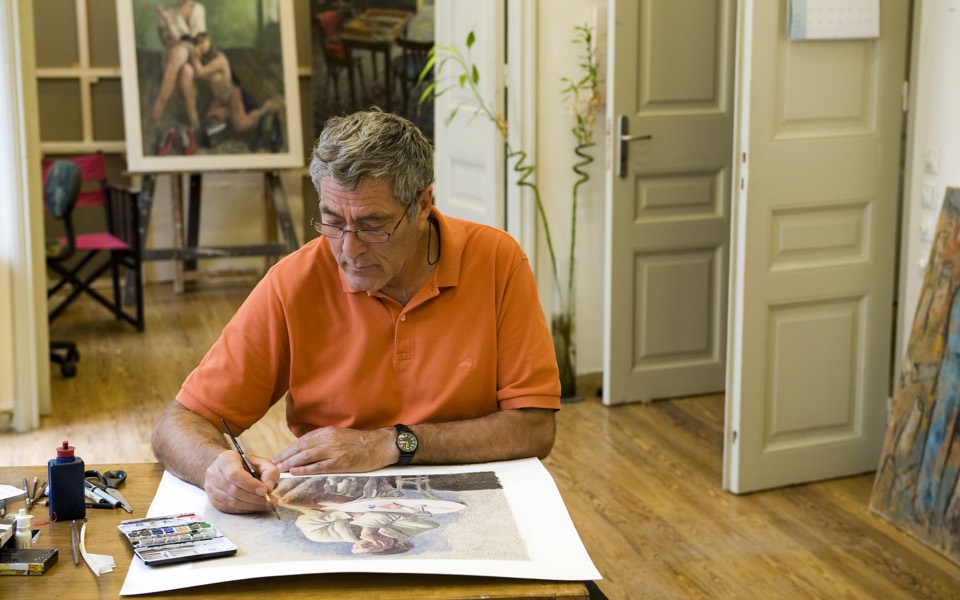 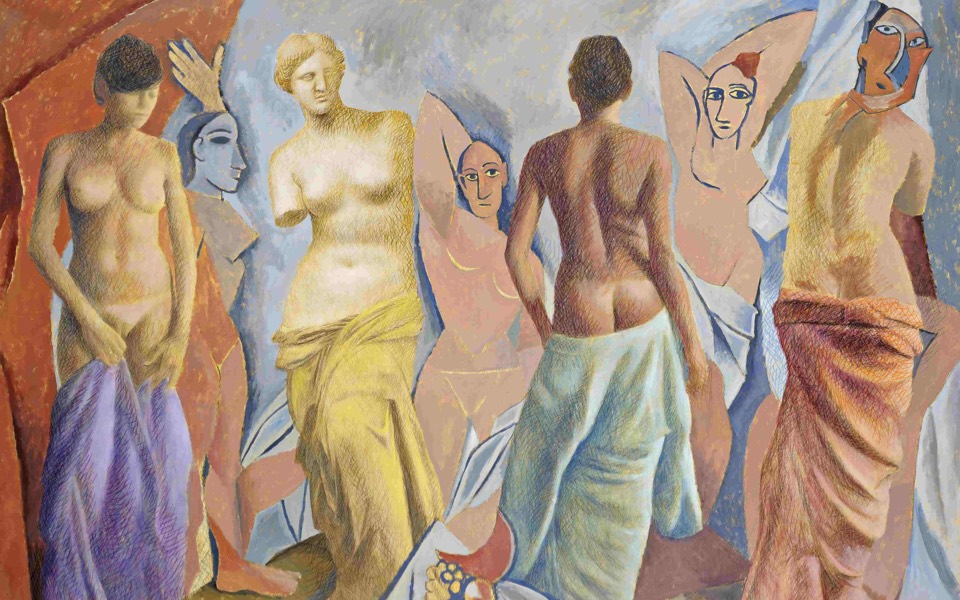 Pavlos Samios, who passed away so unexpectedly at the age of 73 earlier this month, was a man full of life. A man who was humble and kind. He never enjoyed talking about himself. He never had to. His career, his work, and most importantly his spirit, were testament enough.

One of the most important ambassadors of contemporary Greek art, he was enamored by traditional Greek painting and hagiography and dedicated himself to them.

He was an artist in every sense of the word, who heard, saw, and learnt much from Nikos Nikolaou, Yannis Moralis, Yannis Tsarouchis, and Manos Hadjidakis. Being around this special group of intellectuals and artists – regulars at the Magemenos Avlos (Magic Flute) restaurant in Proskopon Square in the Athens neighborhood of Pangrati – broadened his horizons. He absorbed much from the discussions they had, contemplating their thoughts and concerns, which helped inform his own artistic forays. He said: “I was between Modernity and Byzantium. Hadjidakis and Tsarouchis helped me overcome this barrier. They brought us up in this Greek reality.”

Samios often spoke of his roots. About how his father, a cobbler by trade, used to send him as a young boy to Sevastakis, a shoe store. Still in primary school, Samios would draw the shoes on display and return with the sketches to his father. He would then help him create shoes for women who needed specialist footwear. Thus began a lifelong fascination with high heels, which feature in many of his works.

The journey of this little boy was not an easy one. He was the son of a cobbler, raised in a working-class neighborhood, before being admitted into the Athens School of Fine Art. He would later return to the school as part of the teaching staff, but not before living in Paris for many years.

He spent 14 years living in the City of Light. In fact, his daughters from his first marriage, Pandora and Aphaia, live in Paris. While there, he worked extremely hard and it was there that he began to cultivate his own style. However, he returned to Greece, to his roots, where he was met with acclaim.

He drew inspiration for his paintings from all eras of Greece, whether ancient, Byzantium or modern. Greek tradition is a theme that runs through his work. It coexists with nods to other art styles, even contemporary Parisian art. He spoke with awe of hagiographies and worked with fresco techniques on several small churches.

He was in love with the sea. Every time he journeyed to his beloved island of Aegina, he felt like a changed man. In his paintings we were introduced to one of the local cafés situated on the waterfront, a place he visited until recently with friends.

He spent a great deal of time, even though he would say not enough, in his house in the Aegina village of Mesagros. It was a warm space tastefully filled with art. The stone walls of the house along with the vines growing around them were in completely harmony with the surroundings, whether the ground or the green of the trees.

It was there that, along with his wife Maria, their children and even their grandchildren in recent times, and their dogs (Mojita, Chupita, Tessa and Habibi), he joyfully hosted friends. He was always the life and soul of any gathering. And when everyone left, and he was alone, he would paint.

He summited the art world, but always kept alive within him his memories from the working-class neighborhood of Tavros where he grew up. The streets of his childhood where he played games and a past where the radio played not only the news to keep him company but Verdi’s “Aida.”

Slowly and quietly, but always steadily, over career-spanning decades he succeeded in fulfilling the advice given to him by Moralis. The great artist had told him “study them and move beyond them.” From this advice his personal style was born. The colors, the geometry, the naked female forms, the coffeehouses.

In half a century of painting, Samios put on over 70 solo exhibitions and participated in many others featuring multiple artists, both in Greece and internationally.

With his huge contribution to Greek art, Samios left a distinct mark on contemporary Greek art. His high heels and nudes, his paintings of old transistor radios, his inspiration from Byzantium and broken sculptures, and his coffeehouses. Greek painting has truly lost one of its last great representatives.

Knowledgeable people attest to the greatness of his skill and work, which combined a poetic quality while maintaining a more anthropocentric approach, and his ability to feature the everyday charm of life with his every brushstroke.

In the words of Greece’s Minister for Culture Lina Mendoni, whether Samios was portraying faces, the female form, or spaces, on his canvas, he always managed to convey a certain heft and personality that exceeded the two dimensions of the frame. And now, he has taken his place in Paradise Café, as he named his last exhibit.

He was saddened by the effect Greece’s financial crisis had on the world of art. People’s interest in the arts had been reduced by the crisis. His last exhibition held at the Skoufa Gallery helped reverse this trend. It featured a series of paintings on his chosen space of comfort and warm familiarity, cafés. In fact, this was a theme he had also spent time on while living in Paris in the 1980s. The success of his exhibition was resounding, as his paintings flew off the wall.

The public’s newly rejuvenated interest filled him with hope, not just for his own works but the world of art in general. But this interest was bittersweet for Samios. He could not hide his grief that he was in pain and that in a time of renewed fascination and demand for art and despite his desire to do so, he could no longer create art. And he was in too much pain.

Pavlos Samios was not only an important artist. He was a great man, companion and father. Humble, authentic, good company and generous. An unassuming cosmopolitan who was polite and disarmingly soft-spoken.

He leaves behind a rich and distinctive body of work. But his passing has also left the people around him, including those of us who were lucky enough to meet him and in time consider him a friend, with a deep sorrow.

A rare personality and a great friend.

The loss of a great Greek businessman

The end of an era