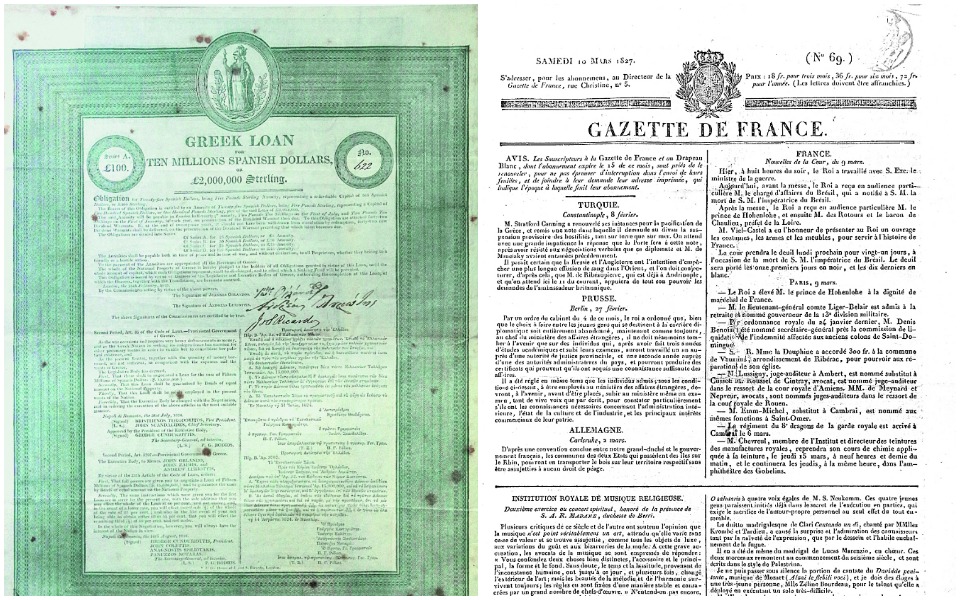 Left: The bond of the second loan, SHP Collection. Right: Gazette de France 10/3/1827. ‘George Canning addressed a new formal note to the Sultan for the pacification of Greece. He requested the immediate cessation of hostilities at land and sea and negotiations for a diplomatic solution in the Greek problem. It seemed that England and Russia would do anything to stop the war.’ SHP Collection. 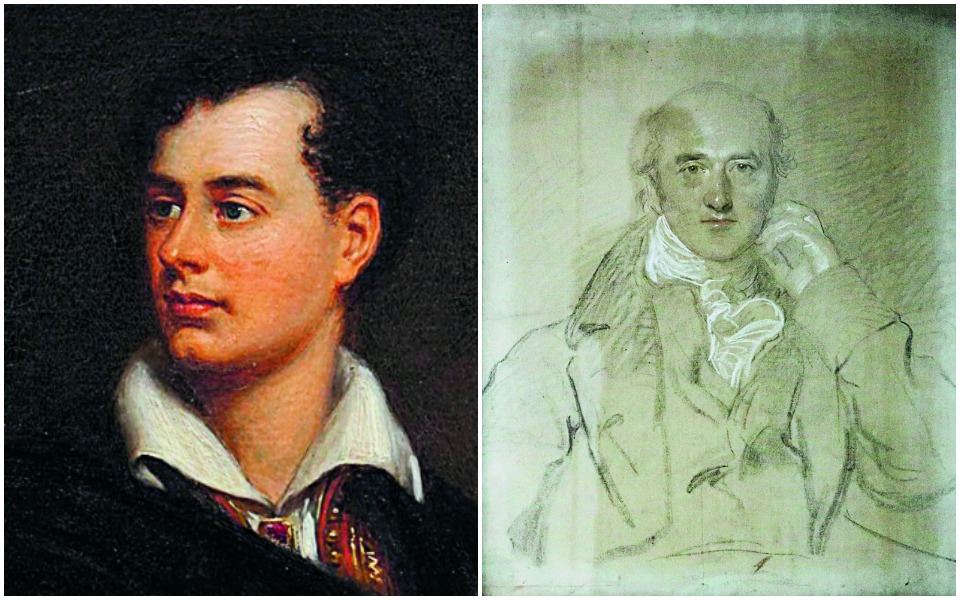 The yield on the 10-year Greek government bond has fallen recently below 1 percent, something which constitutes an achievement, especially after the financial crisis of the last decade, when the return on 10-year bonds reached 36.5 percent.

This reminds us of the famous independence loans, which were the first to be concluded by Greece before it was recognized as a free state.

Many academic and political circles refer to these loans from the United Kingdom as “burdensome” or “robbery,” and an example of exploitation of a poor country by foreign bankers.

One might wonder whether these loans did indeed constitute the “ruthless exploitation” of the country, and whether the representatives of Greece were foolish to agree to their terms.

There were two loans.

The first loan was concluded in 1824, for 36 years (underwriters: Loughnan & Sons and Ο’Brien), with a nominal value of £800,000. The amount disbursed was £472,000 or 59 percent of the nominal value. The loan was negotiated from the Greek side by Ioannis Orlandos and Andreas Louriotis.

Both loans were bonds with an interest rate of 5 percent and an annual amortization rate of 1 percent (both on the nominal amount). In both cases the first two years’ interest payments were prepaid.

The second loan contract also provided the use of £250,000 to partially pay off the first loan in order to support its market value in the secondary market.

We will compare the terms of these loans with what applies currently with the Greek government bonds.

This method of calculating the final value of a recurring payment to an account (sinking fund) of X amount over Y years, where the amount deposited is compounded annually at a safe interest rate, applies even today. The only difference is that nowadays the safe rate (e.g. the interest rate of Bundesbank or US bonds) is about 3 percent or less, whereas back then it was 5 percent.

The borrowing rates at that time, which fluctuated depending on the risk of each investment, were in general almost double those of today. This is also supported by the related bibliography.

What may confound present-day readers is the fact that instead of receiving £800,000, the borrowers (i.e. the revolutionary Greek government) cashed only 59 percent (£472,000).

Many think that the difference was withheld by extortion and, accordingly, that the loan was a “robbery.” Were the uprising Greeks victims to foreign Shylocks?

Of course not. The terms of the loan simply had to be adjusted according to the risk.

Nowadays, the terms of a loan are adjusted according to the risk it presents, through the interest rate. The higher the risk, and the longer the repayment period, the higher the borrowing rate.

Back then, however, the markets did things differently.

The loan contract provided for a safe interest rate (5 percent) and the adjustment, depending on the risk, was achieved by purchasing the bonds at a price below the nominal. This practice is used partially even today.

In other words, this is exactly what also happens today in the secondary bond market, and the interest rate that the creditor received was the “yield” of the bond.

Moreover, under the terms of the loans, Greece was paying annually 1 percent of the nominal amount of the loan for the amortization of the capital, while it should actually pay only 0.59 percent to repay the amount it actually cashed as a loan. To account for that, we add this additional charge of 0.70 percent on the real capital to the interest rate of 8.47 percent, resulting in the real interest rate of 9.17 percent.

Accordingly, in the case of the second loan, the real interest rate was 9.80 percent.

In conclusion, we deduct the following:

These terms, and especially the real interest rate, are not “robbery” at all, especially if we consider the following:

(a) the guarantees that the borrowers could present:

The aspiring borrowers were not even a recognized state, but merely representatives of a “rebel nation” with the ambition to form a state, and who, after some initial successes, entered into a civil war. In parallel, the Ottoman Empire was referring to this “rebel nation” as “terrorists,” while the Holy Alliance viewed it as a serious threat to peace in Europe.

(b) that the overall level of interest rates internationally was at that time higher than what it is today, as evidenced by the fact that the “safe rate” was 5 percent, while today it is about half that level. Therefore, the (real) interest rate of 9.5 percent, which was applied to Greece, corresponds to an interest rate of 5.5-6 percent at today’s standards. These terms are very favorable, at least in present-day terms, let alone when it comes to 36-year bonds.

Moreover, the best proof that the terms of these loans were not onerous, but rather the opposite, is the following. One of the conditions of the second loan was to partially repay the first loan for a total nominal value of £250,000.

Regardless of whether this repurchase was advisable or not, we note that one year after its issuance, the price of the first loan on the free (or secondary) market had fallen from £59 to £45.4 (i.e. they were depreciated by 23 percent) and respectively, the bond yield went from 9.5 percent up to 11.9 percent.

So the “markets” had judged that the Greek bonds were overvalued, and that their real value, in line with the risk these bonds represented, was £45.4 rather than £59.

Therefore, it was the lenders of the first loan (that is the original buyers of the bonds) who had suffered a loss, and not the borrowers. We should also not forget that the real lenders were not some “bad” bankers, who were reasonably eager to earn a commission, but the bond holders who were mainly philhellenes (and most of them simple citizens), who wanted to help the insurgent Greeks and to honor the memory and struggle of Lord Byron.

It is also worth noting that all the loans agreed by Latin American countries with English banks between 1822 and 1825 had a similar structure. In general, the terms of the loans to Greece were better. Indicatively, all loans (with the exception of Mexico’s first loan) had an initial interest rate of 6 percent, instead of 5 percent, while important commissions were paid.

However, commission of £750,000 was deducted. So Mexico finally got £1,100,000. The comparison with the terms of the Greek loan is straightforward. Bear in mind that after a revolution which began in 1810, Mexico was already an independent state as of August 24, 1821.

The final conclusion is that the famous “English loans” were not robbery at all, and those who negotiated them were neither traitors nor fools. Actually, they were assisted by philhellenes, worthy financial advisers.

It is likely that the subsequent management of the loans was not appropriate, and it seems that several lapses occurred; but the loans themselves had reasonable terms, given all the parameters.

The problem with these loans was not their terms but the inability of Greece to use the funds to support the struggle, and then to service them during the following years through wise financial management.

It is also worth noting some other parameters related to these loans. Beyond the financial aspects, these loans constituted the strongest political acts of official recognition of the insurgent Greeks and the prospect of an independent Greek state being established.

The loans were made possible when the great British politician and philhellene George Canning took the office of foreign affairs minister in the UK.

Canning drastically changed the policy of his predecessor, Viscount Castlereagh. He recognized Greece as a country at war and gave the green light for the City of London to issue loans to Greece.

In any event, even if the Greeks had made the best use of their loans, history has shown that the nation’s liberation required a decisive naval battle at Navarino.

This battle involved 29 of the best ships of the three allies with the most experienced personnel aboard, under the command of the great British admiral Sir Edward Codrington, who smashed the Turkish-Egyptian fleet of 90 ships.

In addition, in order to persuade Ibrahim Pasha to leave Greece, it took another 10 months and the presence of a regular army of 15,000 men under General Maison, and, in parallel, continuous negotiations between Codrington and Egypt to reach a final agreement only in July 1828.

Has anyone ever calculated the value of this support that Greece received from its allies, and firstly from the UK? How many more loans would Greece have to receive, and what blood tax would Greeks have to pay on their own to gain their freedom?

If all of this is taken into account, then we can conclude that these loans were almost gratuitous, and that the help and support that Greece eventually received was then, as it is today, unprecedented internationally.

Greeks owe this support to philhellenism and the admiration expressed by the Western world for Greek culture and heritage which has emanated through the centuries from the marbles of the Acropolis of Athens.

Nikos Apostolidis, former professor at the National Technical University of Athens, and Constantinos Velentzas are members of the Advisory Board of the Society for Hellenism and Philhellenism (www.eefshp.org).

Convincing my Swedish mother to use antiseptic gel

Greek prodigy pens ‘Isolation Waltz’ for a world in lockdown

New monograph for US foreign policy in Eastern Mediterranean

‘Greece from Home’ platform to be launched