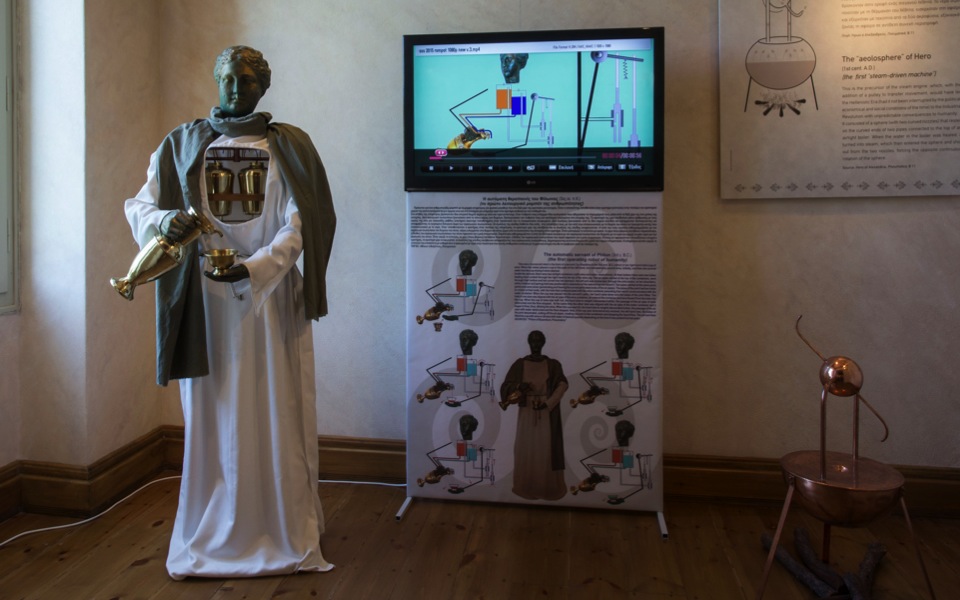 The 3rd c BC automatic maid is considered to have been the first robot in history. 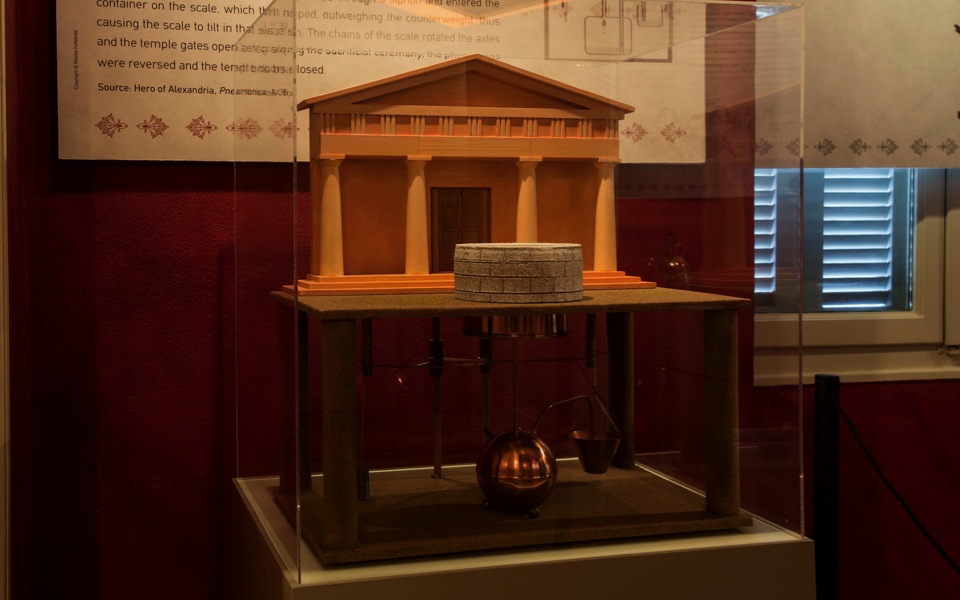 A model of a system for opening temple gates after a sacrifice at the altar. The inventor is unknown. 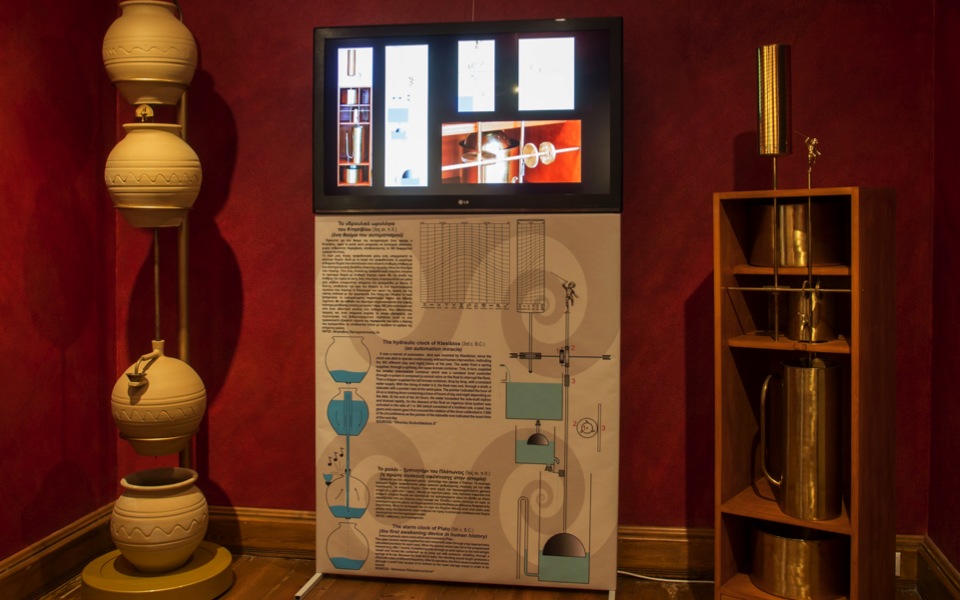 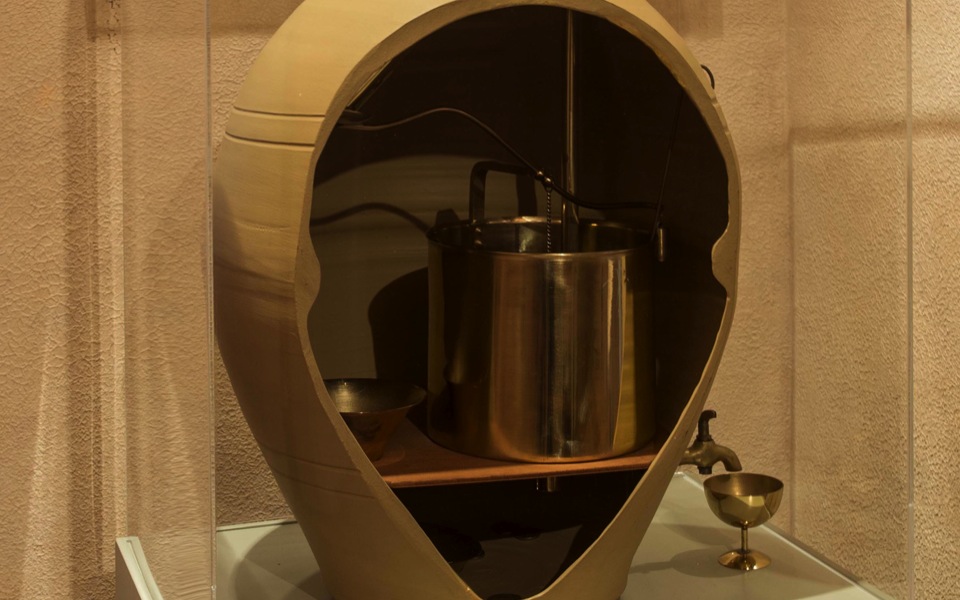 The automatic maid on the first floor of the Herakleidon Museum Annex on Apostolou Pavlou Street in central Athens looks like something out of Star Trek. Made by Philon of Byzantium in the 3rd century BC, one of the leading engineers and writers on mechanics in the Hellenistic period, it is considered to have been the first working robot in history. It was a complex device in the form of a life-size woman. In her right hand she held a wine jug. When a cup was placed in the palm of her left hand, she automatically poured wine first and then water – both stored in metal jugs suspended in her chest area – to achieve the right mix. Its faithful recreation by collector Kostas Kotsanas never ceases to amaze visitors.

But there are many more wonders to be seen in the exhibition “Amazing Inventions of the Ancient Greeks,” such as the static automated theater, again by Philon, which presented to audiences the plots of popular myths, through moving images, sound and impressive effects, or the alarm clock of Plato (5th century BC), believed to be the first ever such device designed to emit an alarm, in this case a whistle. Then there is the coin-operated holy water dispenser devised by Heron of Alexandria (1st century AD), a distinguished mathematician and engineer, which was ideal for placement at temple entrances. When a coin was thrown into the pot, it fell onto a balance that moved and opened a valve, releasing a quantity of holy water according to the weight of the coin. And of course Archimedes’ steam cannon, which fired stone balls.

We have learned details about the existence and operation of these wonderful technological achievements thanks to Kotsanas, who began to reconstruct the inventions of the ancient Greeks as fully working models in the 1980s, when he was a student of mechanical engineering at the University of Patra. “They are extraordinary machines and pioneering, specialized instruments, which demonstrate that the technology of our ancestors was strikingly similar to that at the start of the modern era, and that Western civilization owes much to Greece; far more than we think,” says Kotsanas.

After exhaustively researching the source texts and archaeological finds, using detailed drawings and – most importantly – the materials and methods of ancient times, Kotsanas has so far recreated more than 350 inventions. Apart from this exhibition, they can be viewed at the museums he has created in the Peloponnese at his own expense: the Museum of Ancient Greek Technology and the Museum of Ancient Greek Musical Instruments in Katakolo, Ilia, as well the Archimedes Museum at Ancient Olympia. Admission to all three is free. The Athens exhibition, which will remain open till January 10, was recently augmented with the addition of a photography section featuring images captured by Anthi Xenaki of 6th century BC technology used in the ancient ore processing workshops at Lavrio.

“Amazing Inventions of the Ancient Greeks” is on display at the Herakeidon Museum Annex (37 Apostolou Pavlou, Thiseio, tel 211.012.6486, www.herakleidon-art.gr).

Is once-revered Delos set for a cultural comeback?