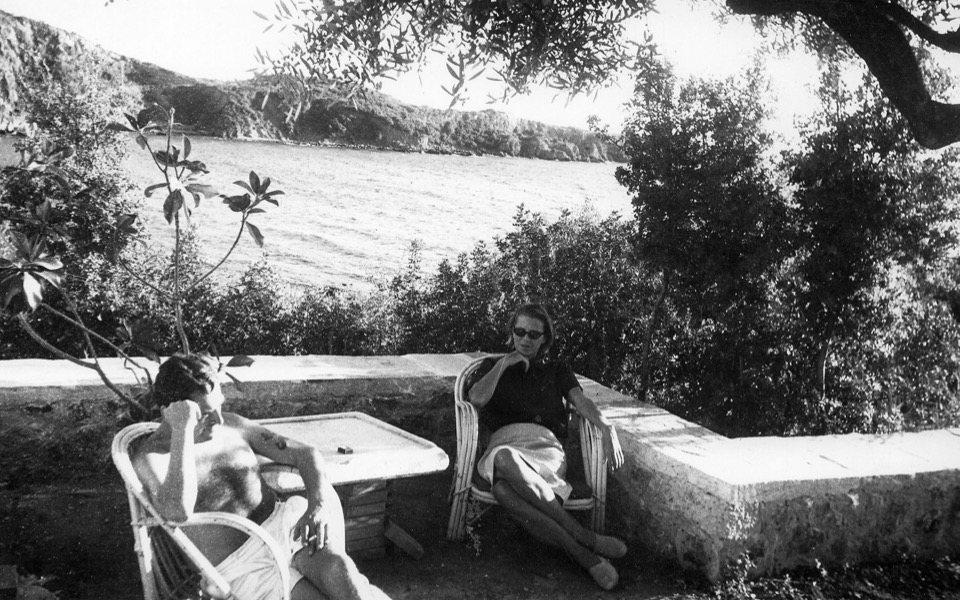 Patrick Leigh Fermor and his wife Joan on the veranda of their home in Kardamyli, in 1967. 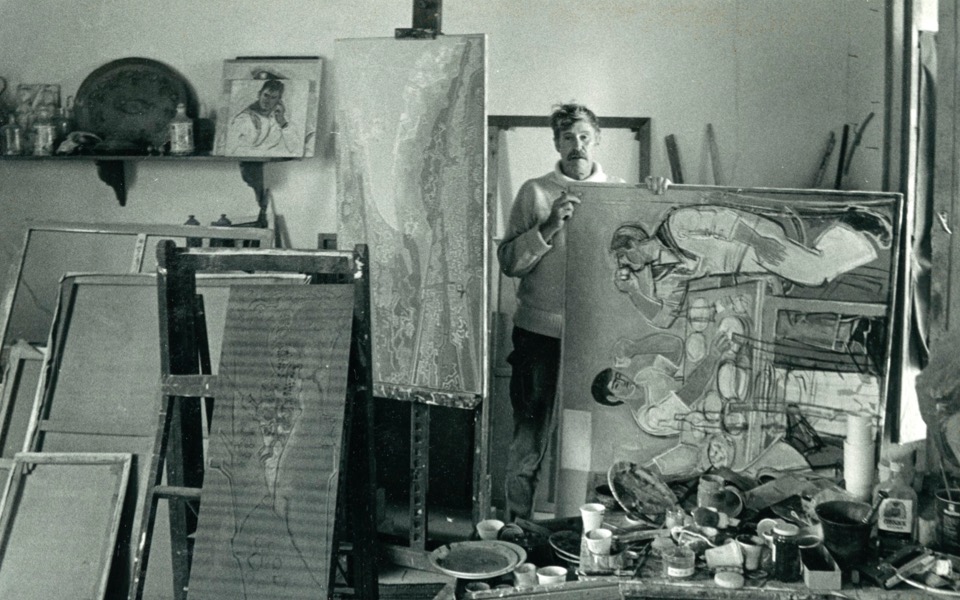 John Craxton in his studio in Crete in 1983. I have often asked myself how an exhibition ultimately affects its audience. What kind of trace does it leave on the collective memory? The answer, I find, is that it depends on the show’s content and the circumstances under which it takes place. In these troubled times, so laden with insecurity and silent resignation, the exhibition that opened at Athens’s Benaki Museum on June 6 on a great friendship is like balsam to the soul.

“Ghika – Craxton – Leigh Fermor: Charmed Lives in Greece” is like a piece of precise needlework using the threads of history to take the audience back to 1945, when Greek painter Nikos Hadjikyriakos-Ghika first met British writer Patrick Leigh Fermor and painter John Craxton. The three became firm friends and over the ensuing 50 years drew inspiration from the Greek landscape, their readings on the country and the virtues of life here, leaving behind enduring impressions in their art and writings. The lives of the three became entwined in four different parts of the country, which is the exhibition’s departure point.

From the Ghika family home on the ridge of a hill on the Saronic island of Hydra, where the friendship was first cemented, to Paddy’s haven in Kardamyli in the southern Peloponnese, Craxton’s house with its unexpected view over the port of Hania on Crete and an old olive mill in Corfu that Ghika transformed into a home after his Hydra property was destroyed by fire, their relationship was defined by an almost constant and highly creative toing and froing between the personal paradises each man had created for himself.

“Each of these houses was a small universe that embodied their love for Greece, its countryside and the warmth of its people. Beyond these three and the wives of Ghika and Fermor, these homes were enjoyed by many others, Greeks and Britons and other guests, who came from abroad to get their own taste of the charms of life here,” says one of the exhibition’s four curators, Evita Arapoglou. Paintings, photographs, letters and drawings illustrate this 50-year journey.

How did the three men meet? It was shortly after World War II had ended and Greece was making an effort to promote its culture, literature and art abroad, with the help of the British Council and its offshoot, at the time, the British Institute.

Athens happened to be home to a group of Greek and British intellectuals – among them Lawrence Durrell, Steven Runciman, Rex Warner, as well as Giorgos Seferis, Giorgos Katsimbalis and Ghika – who helped spearhead the golden age of cooperation between the two countries, organizing soirees and exhibitions. One of the many things the Britons had in common was their attraction to the Greek people and countryside.

Ghika, who spent most of his adult life in France, also lived in London for a few years during this period. Fermor already knew Greece very well and Craxton, who was a close friend of Joan Leigh Fermor, was hooked from his first visit to the country.

The house on Hydra, which held a lot of childhood memories for Ghika but needed extensive renovations, was a revelation to the Fermors, who spent around two years there in the mid-1950s and which is where Patrick wrote the bulk of his book on Mani. Craxton was also a familiar figure there, where he would paint views of the small Saronic island. Ghika and his wife Barbara were indeed the perfect hosts.

When the house was destroyed by fire in the early 1960s, Ghika couldn’t bear to set foot on the island, so it fell to Craxton to go and see what could be salvaged from the ashes. That fire marked the end of the first chapter of three men’s friendship, which was rekindled when the Fermors moved to Kardamyli and Craxton to Hania. Toward the end of the decade, the Ghikas built their house in Corfu.

The wonderful exhibition at the Benaki is all about serendipity in another respect too, as the idea emerged from the meeting of four people with deep knowledge and admiration for the three friends. Arapoglou is the curator of the Greek collection at the Leventis Gallery in Nicosia and is an expert on Ghika, as well as having known Fermor and Craxton personally. Former British ambassador to Athens, historian and writer Sir Michael Llewellyn-Smith knew Fermor and the archive he left behind very well, while Ian Collins wrote a monograph on Craxton, with whom he was friends. The fourth curator of the Athens show is Ioanna Moraiti, the Benaki’s archive director, and she was instrumental in helping the other three pool their knowledge and expertise.

When they were first brought together in 2014 thanks to Edmee Leventis, it became clear that the subject of Ghika, Fermor and Craxton’s close friendship and their relationship with Greece would make a wonderful theme for an exhibition. The project was funded by the Leventis Foundation and the show was first held at the Leventis Gallery in spring. After Athens, the exhibition will be shown at the British Museum.

A painter, sculptor, engraver, writer and academic, Nikos Hadjikyriakos-Ghika (1906-94) was the eldest of the three. He moved to Paris at the age of 17 to study art and soon developed a large intellectual and artistic circle of friends and acquaintances. While he was influenced by the trends and movements in Europe, like architect Dimitris Pikionis, his contemporary, Ghika also became increasingly interested in Greek folk art and tradition. He emerged as one of the greatest figures of the Thirties Generation and Hydra played a huge role in his work. Barbara was his second wife.

Patrick Leigh Fermor (1915-2011) was a restless scholar with a love of adventure. He discovered Greece while crossing Europe on foot at the age of 18. He returned in World War II, where he became a hero of the resistance and the mastermind behind the kidnapping of German General Heinrich Kreipe. He moved to Athens after the war, before the house in Kardamyli was built. He is the author of several wonderful books, including “Mani: Travels in the Southern Peloponnese,” “Roumeli” and his three books about his journey across Europe, among others. His wife Joan was a photographer.

John Craxton (1922-2009) was the youngest of the bunch, a free spirit with a definite wanderlust. He found his ideal haven in Greece, and Crete in particular, where he was impressed by the people and their way of life. During his time there, he was regarded as one of Hania’s most recognizable personalities.

The exhibition is accompanied by a bilingual book with texts by the curators and an abundance of photographic material pertaining to the three friends’ lives.

The World War II adventures of an ancient lady

Rewinding to the era of analog politics