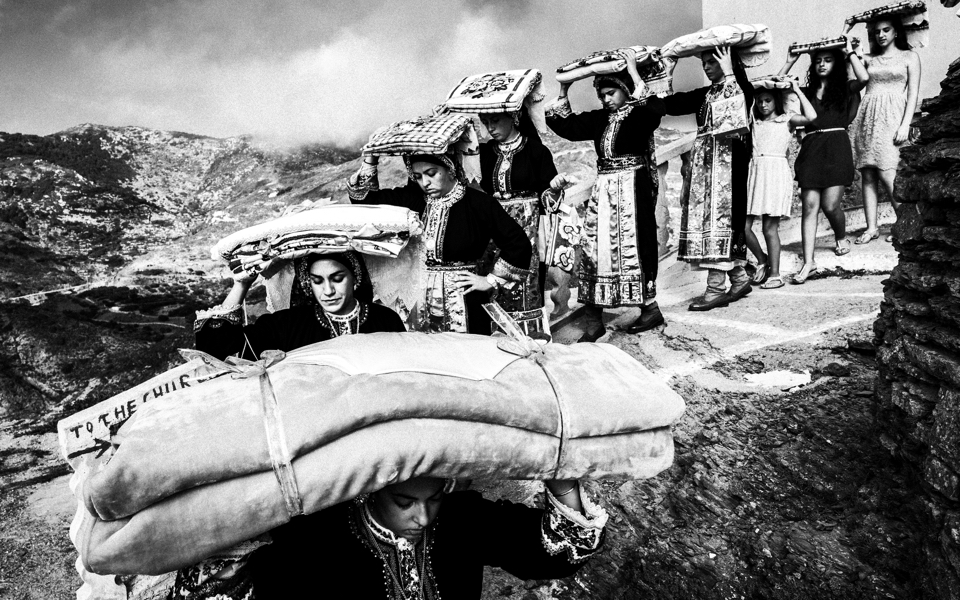 A new show at the Benaki Museum of Greek Culture in the central Athens neighborhood of Kolonaki brings together two young photographers in a joint exhibition titled “Ethos: Another Side of Greece.” The work of both George Tatakis and Michael Pappas displays youthful enthusiasm, an experiential approach and genuine interest in the topic of the country’s surviving customs and traditional events.

The exhibition was put together following a proposal by the museum’s photographic archives department. The show fits in perfectly with the institution’s folklore collection, comprising some 6,000 pieces of Neohellenic folk art spanning the period from the second half of the 18th to the end of the 20th century.

Tatakis and Pappas met for the first time during a “panigyri” in Mesolongi, western Greece. They had both gone because they enjoy a good traditional festival and because they know how to document the subjects that inspire them. They worked separately that day, but have been traveling as a duo ever since. The photographs on display are the product of their joint labor over the past seven years. And although they often document the same event, the artistic outcome remains strictly personal.

Tatakis shoots pictures in black-and-white. His images exude a sense of inner balance and are in a way reminiscent of those by Constantine Manos and Nikos Economopoulos. Tatakis says he has been influenced by the work of Josef Koudelka, the Czech-born master who is credited with changing the aesthetics and philosophy of documentary photography. Pappas prefers to shoot in color and although his compositions appear more random, the images elicit spontaneous and carefully crafted emotions.

They share an affection for the people at the center of their work as well as the desire to discover the Greek countryside and present it in a fresh light. Their basic principle is that a photographer must be conscious of what has an impact on his psyche and must be able to transmit his sensitivity while documenting the scenes unfolding before him. Thanks to their persistence and their discreetness, the two photographers have managed to make their subjects feel so comfortable in their presence that they cease to pay attention to the camera, allowing them to capture fragments of real life.

Alongside the photographs on show at the Benaki, visitors can also see a feathered helmet from Kozani in Western Macedonia and a woman’s outfit from the southeastern Aegean. Both items were loaned to the museum by their owners – a testimony to their relationship with the photographers.

The work of Tatakis and Pappas has appeared in National Geographic, Leica Fotografie International, the M Magazine and Vice US. With the help of two more photographers, they have set up the Reflex Photographers cooperative of internationally published photographers and digital platform pculiar.com, a detailed online guide on customs and traditional events such as those documented in their work.

“Ethos: Another Side of Greece” will remain on display at the Benaki Museum of Greek Culture (1 Koumbari, Kolonaki, tel 210.367.1000, www.benaki.gr) through January 13.

Cartier-Bresson photos from Teriade collection on show in Lesvos

Benaki retrospective hits all the high notes of Moralis’s career

Treasures from the Forbidden City in Athens