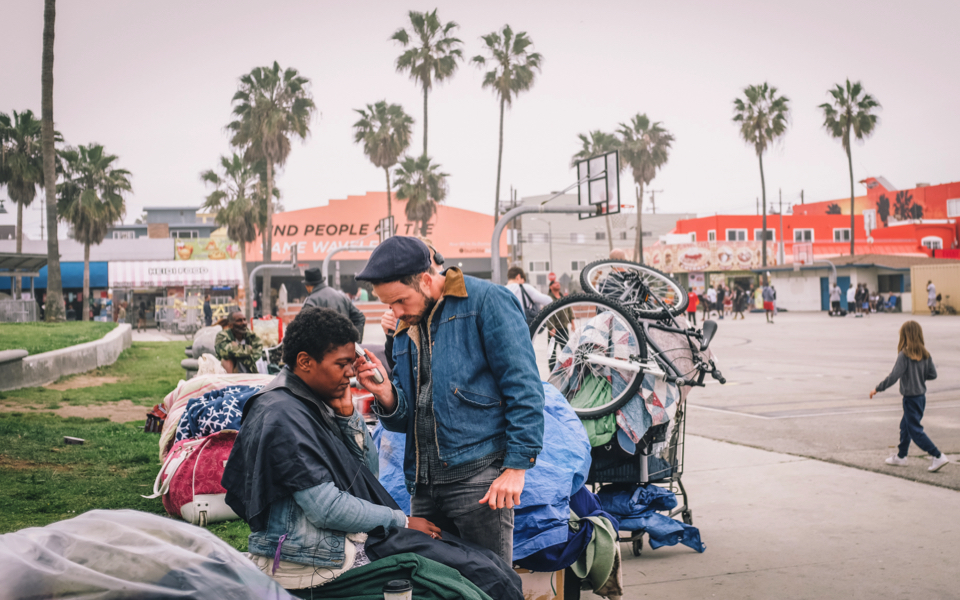 Joshua Coombes, a 31-year-old hairdresser-turned-activist from Devon, defends his decision to join forces with a private business. Feel the pain. Volunteers at the event were invited to take off their shoes and walk across 12 meters of rocky ground while carrying two 10-liter jerry cans of water. Women and children in the developing world have to walk an average of 6 kilometers daily to access clean water. 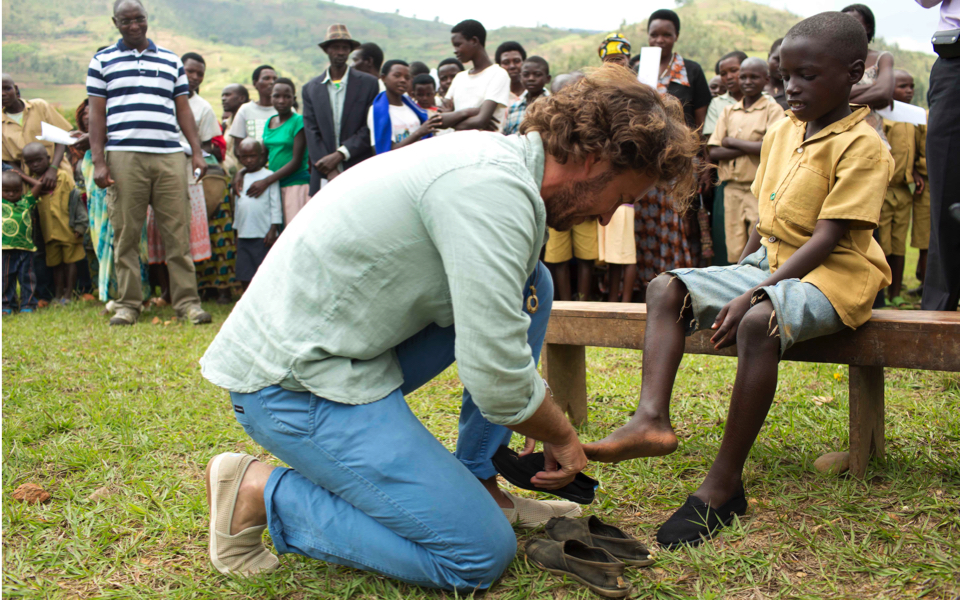 AMSTERDAM – Joshua Coombes is as straightforward as he is charismatic. He raises his voice above the dance music blaring from the adjacent hall of De Hallen, a refurbished tram depot east of the city center. Toms is unveiling its latest campaign, and this 31-year-old hairdresser from Devon on the southwest coast of England speaks with palpable enthusiasm about his role in it: “I am an amplifier for people who have no voice.”

For years, Coombes would roam the streets of London after work, giving free haircuts and shaves to the homeless, posting before and after photos on his Instagram account hashtagged with his animating principle #dosomethingfornothing. In late 2015, at the peak of Greece’s refugee crisis, Coombes brought his scissors and street cuts to Athens’s Elliniko camp and Victoria Square. He has also couch-surfed across the world from the US to Mexico and Ecuador, to France and Germany. Until he received that phone call from Toms. Coombes is now one of the firm’s so-called changemakers – social activists selected to spearhead the California-based company’s new #standfortomorrow campaign on homelessness, female empowerment and social entrepreneurship.

“It is not just a campaign,” Coombes says. “They are living it. Sure, they spend money on an event like this, but they also work with people.”

The story behind Toms is more or less known, elevated as it may have been to the status of inspirational fable. As its founder, Blake Mycoskie, writes in his autobiography, “Start Something That Matters,” the idea hit him during a trip to Argentina back in 2006. The Texan, then aged 30, was spending his time playing polo, learning the tango and drinking Malbec. That was until he started to notice lots of kids with no shoes who were suffering from injuries to their feet. The spectacle spurred him to action.

He decided to import the alpargata, a local version of the classic espadrille, to the US and for every pair sold to donate a pair of new shoes to a child in need – a policy that came to be known as “one-for-one.”

We are sitting at a boutique hotel in De Hallen. Smith, with past experience at Apple and a nonprofit, handles questions cautiously, glancing every so often at her laptop screen. “I think a desire to do good turned into a movement. I don’t think he or anyone at Toms would say that the outward intention was to create a movement – the intention was to give back to a community and to people he saw in need,” she says. The brand’s mantra, she adds, is “Toms’ mission is to improve lives through business.”

Almost 13 years and 86 million shoes later, the social entrepreneurship landscape has changed radically. Smith admits that the company, 50 percent of which is now controlled by equity firm Bain Capital, is too “humble” to claim it actually invented a new type of consumer, the “ethical consumer,” as it were. To be sure, hundreds of companies followed in Toms’ footsteps. Others offered a poor imitation. Greenwashing, a practice whereby companies style themselves as more environmentally friendly than they genuinely are, is still widespread as many established businesses, often slow-moving bureaucracies, are struggling to make a substantial transition or see no economic sense in doing so. Data, however, show that treating socially minded commerce as a fad is not good for business. In the past few years it has become something consumers ask for – and reward.

A Clutch survey published in the US earlier this year found that 68 percent of consumers said the social profile of a company was more important than price when choosing a brand or product. That share climbed to 71 percent when it came to environmentally friendly practices. In the same poll, 75 percent said they were likely to start shopping from a brand that promotes an issue they agree with, whereas 59 percent were likely to stop shopping at a company that supports an issue they disagree with.

“Your millennial and Gen Z customer is going to vote with their wallets, they are very savvy consumers, they expect companies to address issues in the world and to take a point of view for the big issues facing communities,” Smith says.

The business landscape has changed for everyone – Toms included. Standing on the event stage, global CEO Jim Alling is trying to fire up the audience with sugar-coated corporate soundbites. His enthusiasm, however, fails to disguise the firm’s concern that it has perhaps grown too big for its own good. “We can’t get tired, we can’t get boring,” he warns. Clouds have gathered on the horizon due to the brand’s limited diversification and the rise of cheaper competition. “People need to recognize we’re committed to creating a platform where positive social impact can take place, but they also need to understand that, without purchases, we actually have no ability to do that,” he says.

Can Toms expand without turning its back on its culture and core values? Smith has no doubt. She describes how the company evolved its give-back model, expanding into eyewear, apparel, handbags and coffee. In return, it provides vision-related medical treatment, the conditions necessary for a safe and sanitary birth, and safe drinking water in developing countries.

Smith says the company reached the point where it was time to take a step further. “It was the sort of pause moment, of ‘What else can we or should we be doing?’” she says. “Humanity thrives when you have opportunity for all people, when you have equality and justice, taking your piece of environmental responsibility and you provide ways for citizens to be in action… From basic needs [we move on] to basic human values, or basic support for issues that go beyond these basic needs,” Smith says, as she paints the outline of the new campaign. “It is a natural progression for our brand and our culture.”

In a rather bold move, Toms launched a campaign late last year to curb gun violence, supporting the drive for universal background checks. Some see a risk of the brand being identified with a specific political agenda – a progressive liberal agenda, in this case.

“It could become very political,” Smith admits. “We have chosen to say this is not a left or right issue, but a life or death issue – people are losing their lives in such huge numbers as a result of gun violence, because individuals did not get background checks,” she says.

Company sales have soared by an estimated 20 percent since the campaign launched.

Along with success come mistakes and criticism. A pair of alpargata are as simple as their production and supply is complex: fashion, profit, sustainability, transparency, ethics all come into play. The give-back model, its critics say, is little more than an ego boost; it only helps us Western consumers feel better about ourselves. At the same time, the practice undermines local economies by fostering dependency on outside aid. Who really can compete with a free product?

“We are always listening to the critics. We want to hear what they have to say and we want to learn from what we are doing, how we are executing and ensuring that we’re having the greatest possible impact,” Smith says. Toms carried out an extensive impact study on local communities. It opened a factory in India and enforced stricter regulations governing working conditions and the sustainability of materials. It was recently certified as a B Corporation for its social and environmental performance.

The fact remains that Toms is and will remain a for-profit company. As Sebastian Fries, one of Smith’s predecessors, said in 2013, Toms is “not in the business of poverty alleviation.” This, however, does not mean that the company has a smaller impact compared to a nonprofit with more benign intentions.

Coombes, for one, seems to think so. Some inside his old punk band were not too happy with his decision to join hands with a private company. He prefers a more pragmatic approach. “It is not grassroots, but it is another way of doing it. Can a bank do this? I do not think so,” he says.

He insists his conscience is clear. “Success is measured by the people I meet on the street, my interaction with them,” he says as he leaves the table for a group photo. “I’m always learning. I do not have complete solutions. I try to keep my moral compass in check.”

Ancient shipwreck to be made accessible to divers in Greece

Now Open: The beds are made at Four Seasons Astir Palace Hotel Athens