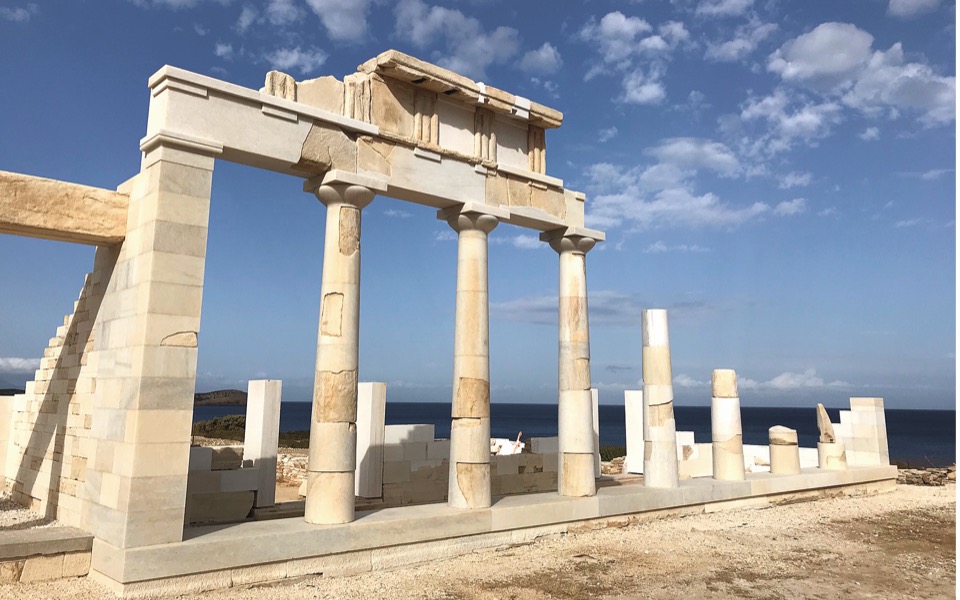 Archaeologists made new discoveries at Despotiko, the uninhabited islet southwest of Antiparos in the Cyclades, though their focus was on restorations. 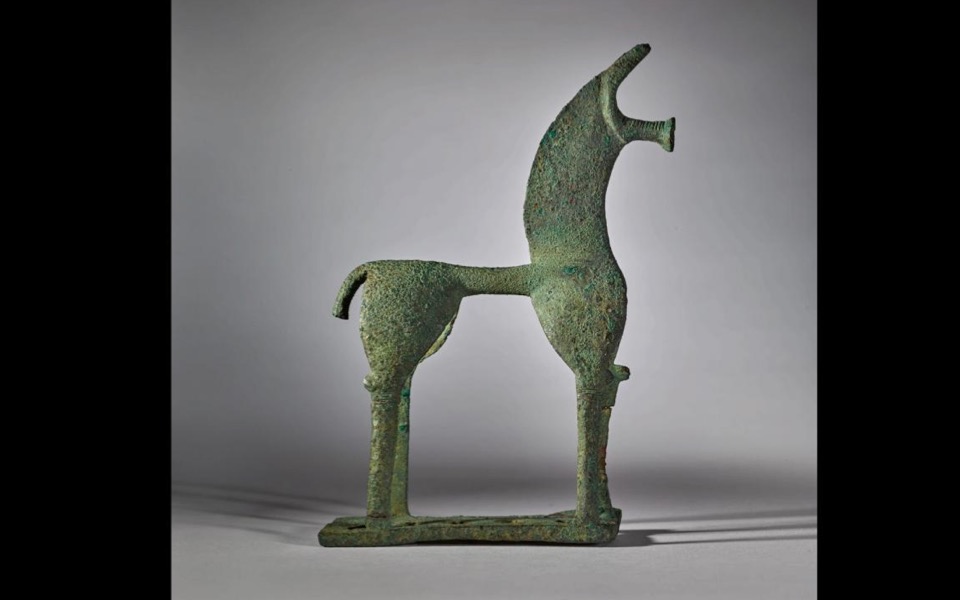 The year 2020 also saw the repatriation of this 8th century BC bronze statuette. 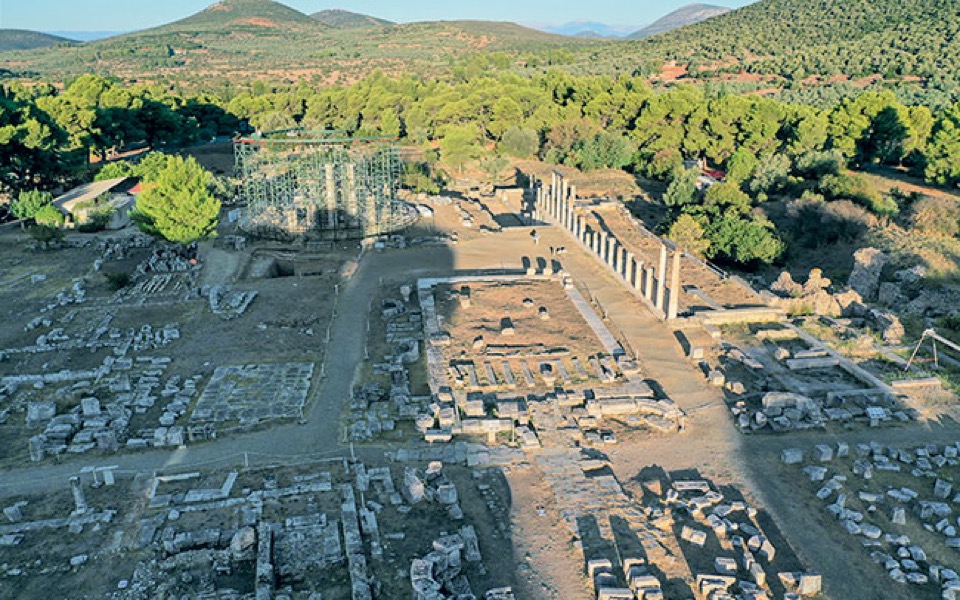 Archaeologists working in Epidaurus struck gold at the Sanctuary of Asclepius with the discovery of an Archaic building that had a ground floor and basement.
Iota Sykka
January 4, 2021 04.01.2021 • 18:22

Excavations carried out in 2020 uncovered all sorts of exciting surprises, despite the challenges of the health crisis, which required stringent safety measures and resulted in fewer hands in the field, especially archaeology students and volunteers from abroad.

One of the most exciting pieces of archaeological news in 2020 came from excavations around the tholos building at the Sanctuary of Asclepius in Epidaurus in the eastern Peloponnese, which began roughly a year ago with the discovery of an Archaic structure by the team of Vassilis Lambrinoudakis, professor emeritus of classical archaeology.

New finds made in the area point to the existence of a chthonic residence of the god dating back to his earliest presence at Epidaurus. They also indicate that Asclepius’ presence in the area dates back much further than believed. The unidentified building – which had a ground floor and basement with a mosaic floor and colonnade – was built in the same area as the emblematic 4th century BC tholos building.

The tiny, 8-kilometer island off the southwestern coast of Antiparos in the Cyclades continued to offer important treasures in 2020, as did the adjacent rock of Tsimintiri, which was connected to Despotiko in ancient times. Apart from the discovery of a 10 structures, archaeologists working at the two sites focused their efforts on the restoration of an Archaic temple dedicated to Apollo.

Work was also carried out for improving accessibility with the construction of wheelchair ramps at Despotiko, while more restorations have been planned for  2021.

Much of the year on Rineia – the mysterious and cloistered site that has been in the shadow of sacred Delos for so long – has been dedicated to the important task of mapping the island’s geomorphology and identifying the exact locations of its artifacts.

According to the director of the Cyclades Ephorate of Antiquities, Dimitris Athanasoulis, this is the first effort ever made to fully document the site and create a framework for its archaeological profile. The work has uncovered ancient farmhouses, an unknown road and the traces of a large altar, while also yielding shards of bird sculptures and sections of steles.

A small part of a gold sheet uncovered by a rainstorm on Crete compelled archaeologist Efi Sapouna-Sakellaraki to raise a stone layer of an altar found at the palace complex of the Athens Archaeological Society’s excavations at Zominthos, around 7 kilometers west of Anogeia. This led to the discovery of a burned tree trunk, lined with 90 gold sheets, and small plates, which must have been attached to the altar or scattered around it.

According to the archaeologist, findings indicate that area in the northern foothills of Mount Ida (Psiloritis) was once “inhabited by the descendants of the Knossos dynasty” and was “an important economic, religious and cultural center.” The two-, perhaps even three-story, main building was in use from at least 2000 BC.

Archaeologists working on the palace complex of Kydonia in Hania, Crete, uncovered the deepest part of a trench used for sacrifices that tallies with the earlier discovery of the remains of animal offerings and those of a young girl dating to Mycenaean times, in the 13th century BC.

The trench is also believed to be responsible for the collapse of the sacrificial altar, as fragments of flooring were found inside it. Archaeologist Maria Andreadaki-Vlazaki, meanwhile, told Kathimerini that even though the complex was likely destroyed by a massive earthquake just before the mid-13th century BC, digs in 2020 indicated that it was built before the mid-14th century BC.

The discovery in downtown Athens, at number 25 Aeolou Street, across the road from the Church of Agia Irini in Psyrri, of the head of an ancient statue depicting the god Hermes was one of the most surprising findings of the year. It was exciting news mainly because the discovery was made during work on the sewerage system by the municipal authority, under the supervision of the City of Athens Ephorate of Antiquities. The head is believed to date to the late 4th or early 3rd century BC and is impressive for the good state it was found in.

The year 2020 saw the inauguration of Greece’s first underwater museum, near the uninhabited islet of Peristera off the eastern coast of Alonissos in the northwestern Aegean.

The launch of the museum allows amateur archaeologists and divers to explore the area on guided tours carried out by certified centers on Alonissos. The highlight of the tour is a 425 BC shipwreck that contained around 4,000 wine vessels.

Greece scored an important victory in 2020 with the return of an 8th century BC bronze equestrian statue that was due to go under the hammer at Sotheby’s. The Greek side had filed an official request with the auction house so that the artifact could be returned to Greece and while Sotheby’s withdrew the item from auction, it also took legal action against the Greek state in a court in New York in June.

The Greek Culture Ministry, however, persisted with its claim of ownership of the artifact, and was vindicated with what Minister Lina Mendoni described as a “massive international success in the fight against the illegal antiquities trade.” The reason is that the American court’s ruling in favor of Greece is an important precedent for any country seeking the return of historical items that have been looted and are being put up for sale.

Greece also saw the return of five rare silver coins dating to the 5th and 4th centuries BC that were returned before being auctioned off in Munich and Zurich. The three from Munich are a stater from Lindos (Rhodes) from the first half of the 5th century BC, an octadrachm of Getas, the king of Edonians in Thrace, dated to around 480-460 BC, and a stater from Elis, dated to around 328 BC. The other two, from Zurich, are an Athenian tetradrachm dated to 136 BC, and a tetradrachm of Ptolemy IV Philopator cut in Sidon around the end of the 3rd century BC.

Ancient ‘Acropolis of the sea’ opens to divers, guarded by high tech