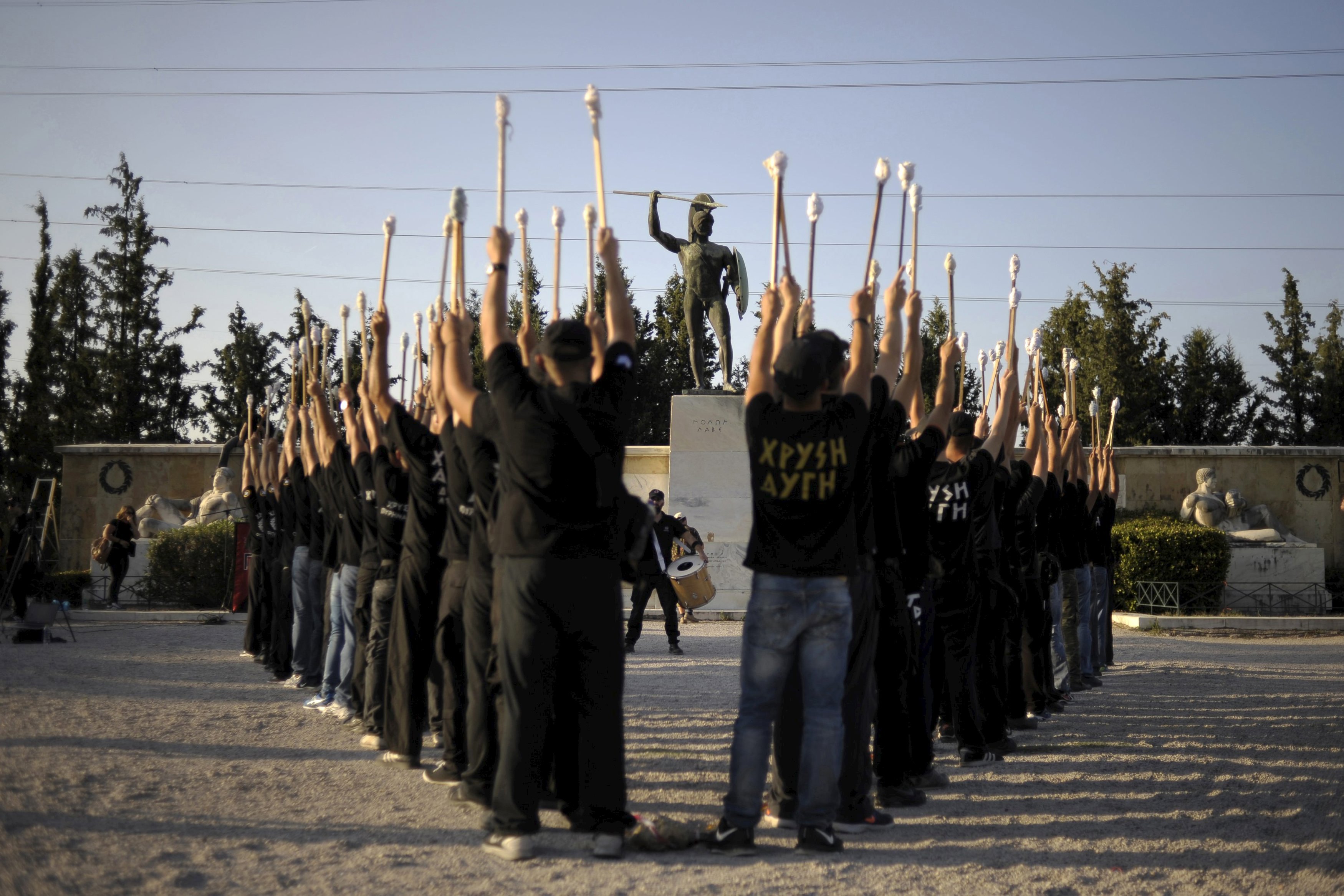 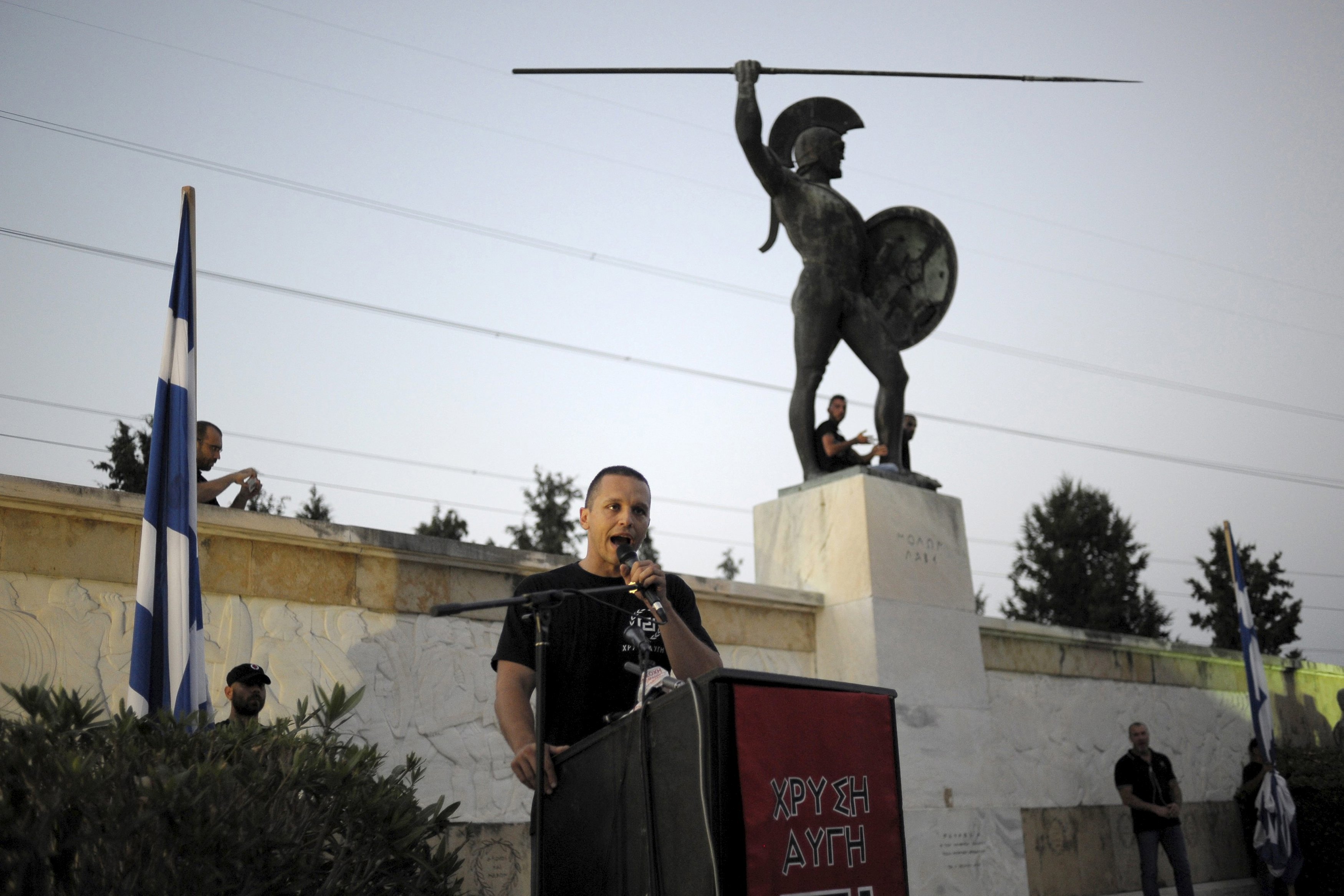 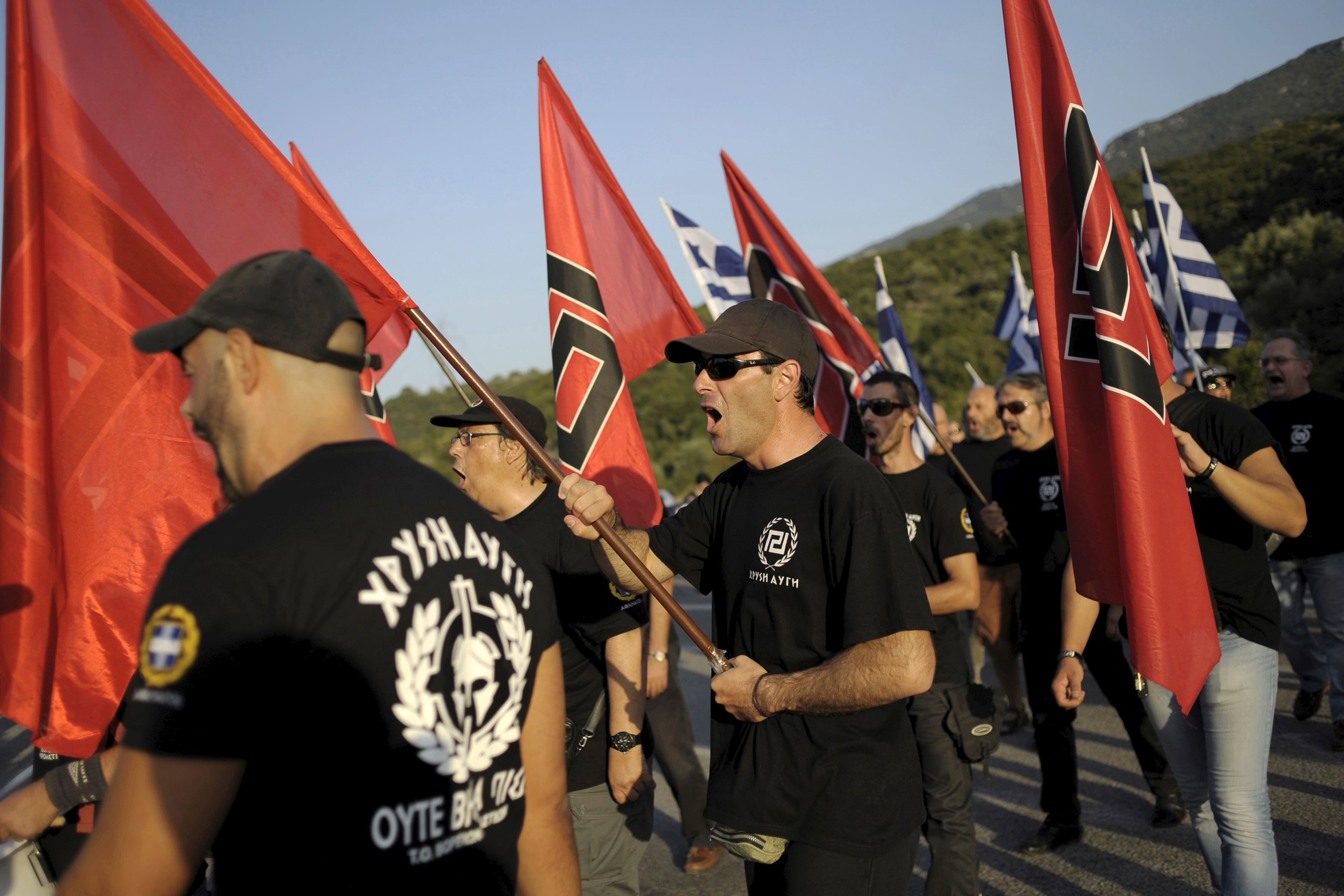 Standing before them, a member of the European Parliament from Golden Dawn, the eurozone’s most extreme right-wing political party, roused the crowd with defiant denunciations of enemies at home and abroad ahead of a national election on Sept. 20.

"The message of Leonidas – Molon Labe (Come and get it) – is as timely today as ever for everything tormenting Greece," the retired lieutenant general, Eleftherios Synadinos, told supporters waving flags bearing the party’s Swastika-like emblem.

"We’re not like everyone else with heads bowed down. We’re upright, we’re standing and the message will be delivered on Sept. 20 … We must not surrender arms. We must not back down," he said, to which the crowd roared: "People! Army! Nationalism!" Golden Dawn, whose leaders are on trial on charges of belonging to a criminal gang that attacks dark-skinned immigrants and leftists, has kept a low profile since a government crackdown put top party officials in jail in 2013.

But despite a relatively low-key election campaign, opinion polls show the party is likely to remain the third-biggest force in the Greek parliament.

Its appeal has been largely immune to accusations of neo-Nazism and brutality, which the party denies. What first propelled it from obscurity into parliament in 2012 – anger at unemployment, austerity, corrupt politicians and immigrants – shows little sign of abating.

"There remains a belief among a big part of Greek society that the entire political system needs a good kicking and many believe Golden Dawn is the way to deliver it," said Costas Panagopoulos, head of independent polling agency ALCO.

The party is the most popular among 18- to 24-year-olds, angered by the government’s decision to reverse course and accept tough bailout terms from international creditors.

No bailouts, no immigrants

In 2012 it entered parliament for the first time with nearly 7 percent and came third in last January’s election as well with 6.2 percent.

Opinion polls show it is on track to win 5.5 to 7.2 percent of the vote on Sept. 20, competing against centrists, Socialists and Communists for third place.
It could score higher than polls suggest as some Greeks are reluctant to say they will vote for the party, pollsters say.

In its manifesto, Golden Dawn says all "illegal immigrants" should be rounded up, detained and sent home. The party, whose members have been seen giving Nazi-style salutes, also wants tax breaks to boost Greece’s low birth rate to "avoid us becoming a minority in our own country."

In a pre-election TV spot, leader Nikos Mihaloliakos, who was under house arrest until July, stands beside the national flag in a suit and urges Greeks to support the party’s "battle against those who have pillaged your dreams."

"A vote for Golden Dawn means no to bailouts, no to illegal immigration, no to foreign rule," he says.

That resonates with Greeks who have struggled during their worst post-war crisis, with record unemployment, collapsing wages and collapsing living standards.

Europe’s migrant crisis has also helped the party as Greece struggles to cope with large flows of refugees driven to the European Union by war and poverty in the Middle East.

"If you add the migrant crisis to huge disappointment and great pressures in every day life you realise the environment favors them," said Panagopoulos, the pollster. "It’s more than a protest vote – it’s a vote of indignation, of anger against the political system, against daily life."

At Thermopylae, where each year the party commemorates a battle that has acquired mythical status, spokesman Ilias Kasidiaris attacked a political system that was "selling out the borders" and allowing "thousands of young barbarians to take over our country."

"We were a handful of Greeks under Nikos Mihaloliakos a few years back — today we are multiplying, we are increasing, we are strengthening," he said as the crowd chanted the party’s battle cry: "Homeland! Honour! Golden Dawn!" "We were 500,000 (votes in 2012) and on Sept. 20 we will be 1 million, then over a million, and in the future many millions of Greek nationalists will unite to defend the country," he said.

Mihaloliakos and a dozen top figures were arrested in 2013, weeks after the stabbing of anti-racism rapper Pavlos Fissas by a party supporter, in the biggest mass roundup of elected politicians in Greece since the colonels’ coup in 1964.

The stabbing had prompted protests across Greece, a shake-up of the police and a broad investigation of the party, during which police found unlicensed weapons, Nazi flags and portraits of Hitler in the homes of arrested party members.

While it has since kept a low profile, the party was also inadvertently boosted by a U-turn by former leftist prime minister Alexis Tsipras who agreed to a bailout he had once vowed to tear up.

"Golden Dawn is now able to argue it’s the only genuine anti-establishment party in Greece against the bailout and the entire political establishment is after it," said Aristides Hatzis, a political commentator and Athens University professor.

SYRIZA clings on to narrow lead in Metron Analysis poll

Theodorakis suggests To Potami could support rather than join coalition