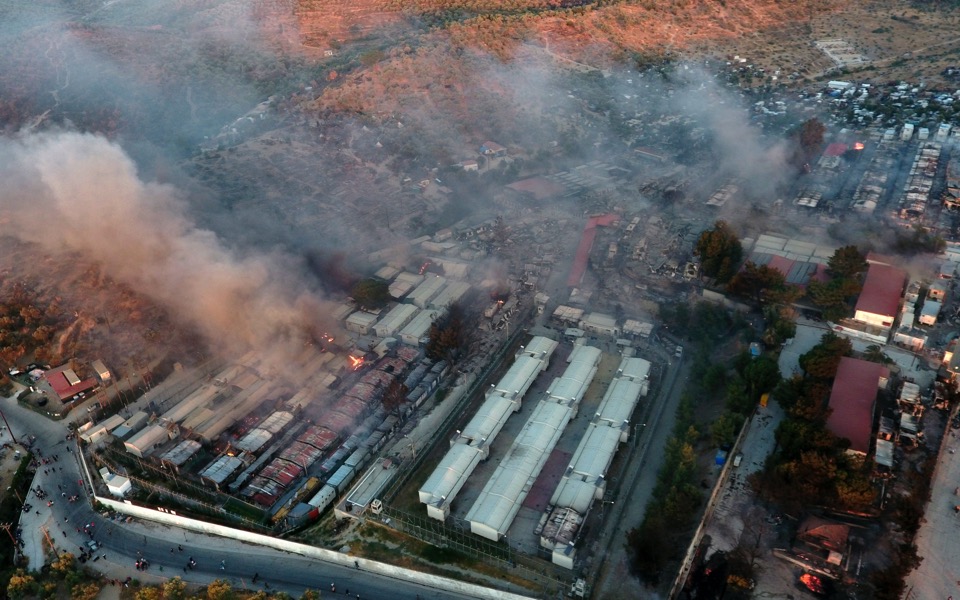 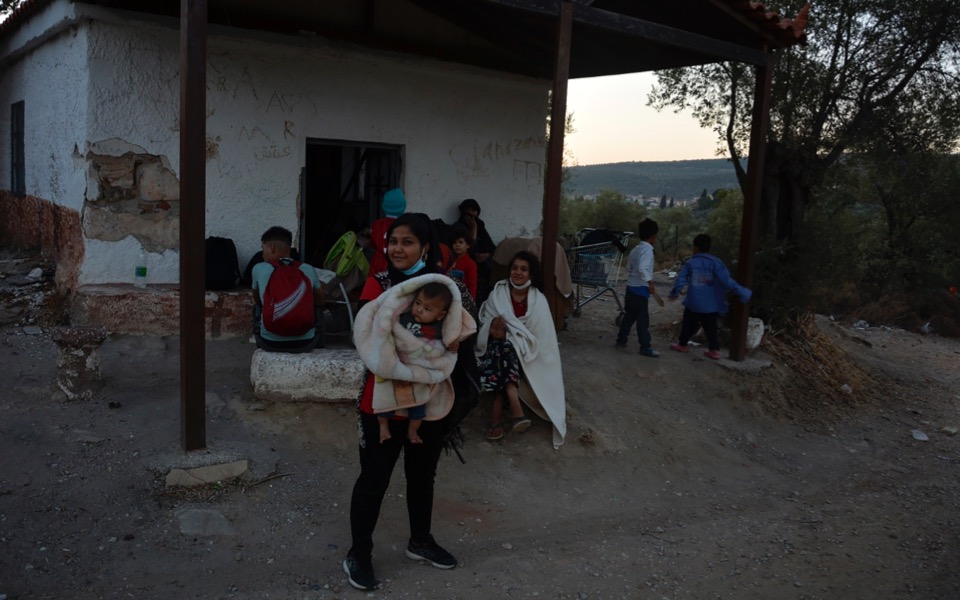 Migrants gather outside an abandoned building during a fire in the Moria refugee camp on the northeastern Aegean island of Lesbos, Greece, on Wednesday, Sept. 9, 2020. [Panagiotis Balaskas/AP] 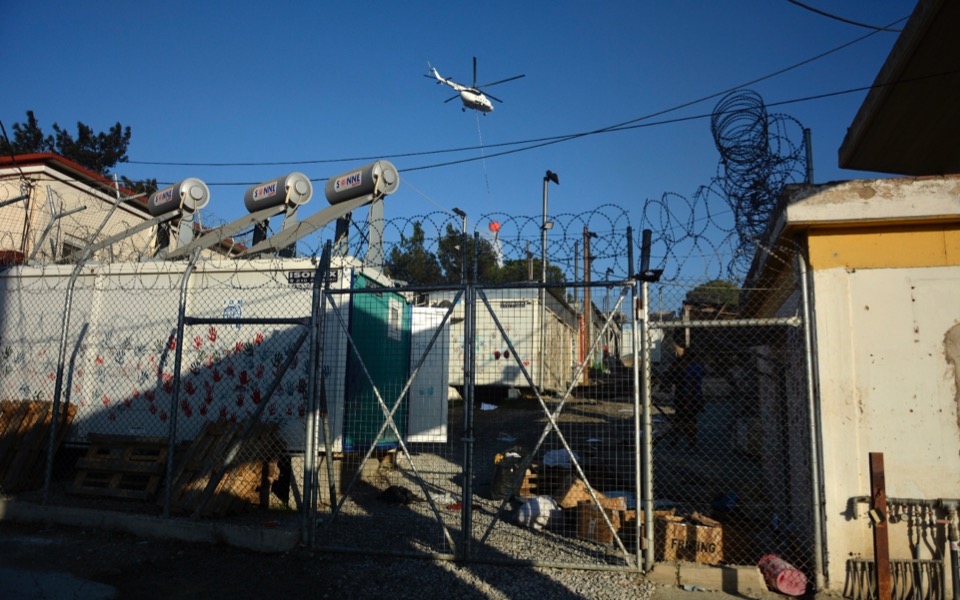 An helicopter operates over the Moria refugee camp during a fire on the northeastern Aegean island of Lesbos, Greece, on Wednesday, Sept. 9, 2020. [Panagiotis Balaskas/AP] 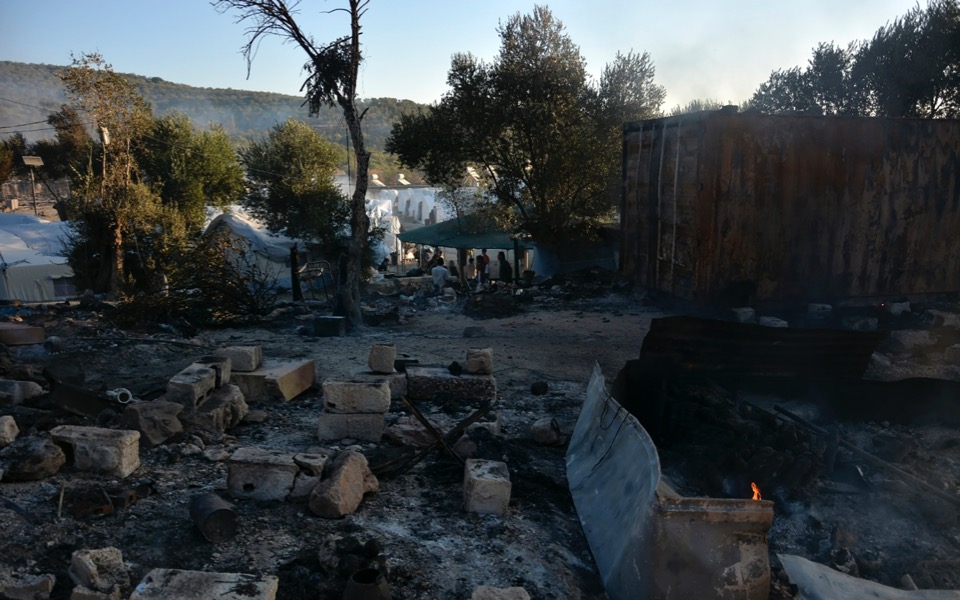 Migrants gather next to burned debris during a fire in the Moria refugee camp on the northeastern Aegean island of Lesbos, Greece, on Wednesday, Sept. 9, 2020. [Panagiotis Balaskas/AP] 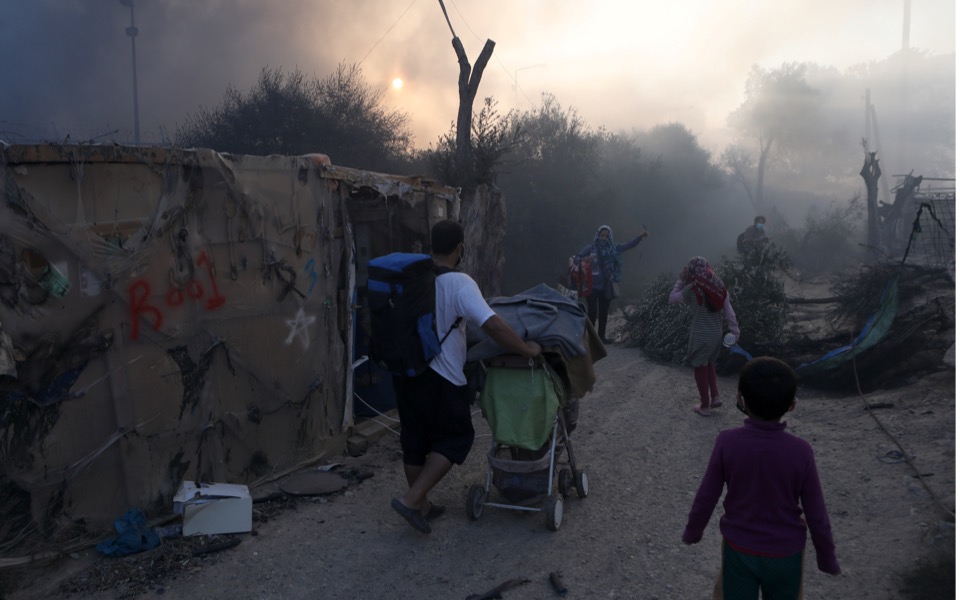 Thousands of migrants fled fires on Wednesday that tore through an overcrowded camp under coronavirus lockdown on Greece's island of Lesvos.

Prime Minister Kyriakos Mitsotakis called ministers to an emergency meeting but there were no immediate reports of casualties.

The fire broke out at Moria camp just after midnight Tuesday, fire officials said. By early morning, most of Moria was a smouldering mass of burnt containers and tents, with a few people picking through the debris for their possessions, television footage showed.

The European Union stood ready to assist Greece "in these difficult times", European Commission Vice-President Margaritis Schinas said in a tweet after speaking to Mitsotakis.

The cause of the blaze was not immediately clear. Authorities were investigating whether there was arson.

Initial reports suggested fires broke out at different locations in the sprawling camp after authorities tried to isolate some individuals who had tested positive for Covid-19.

"The fire is still raging, the camp has been evacuated. All these people are on the national road towards (the town of) Mytilini," said Panagiotis Deligiannis, a witness from Moria.

"There are police out who are not letting them through. These people are sleeping left and right in the fields."

The government was likely to place Lesvos in a state of emergency, allowing it to mobilise all forces to support the island and asylum seekers, a government official said.

Mytilini mayor Stratis Kytelis said migrants would have to be moved or housed on ships to prevent the new coronavirus spreading.

"The situation was out of control," policeman Argyris Syvris told Open TV, adding that police were forced to release about 200 persons who were to be repatriated to their countries.

Conditions at the Moria facility, which hosts over 12,000 people – more than four times its stated capacity – have been criticised by aid groups who say it is impossible to implement social distancing and basic hygiene measures there.

It was placed under quarantine last week after authorities confirmed an asylum-seeker had tested positive for the novel coronavirus. Confirmed infections have risen to 35 since then.

Lesvos, which lies just off the Turkish coast, was on the front line of a mass movement of refugees and migrants to Europe in 2015-2016. Because of the pandemic, all migrants reaching the island since March 1 have been quarantined away from the camps.